This latest addition to the MSI's Gaming series graphics cards is the GeForce GTX 780Ti Gaming 3G. The card sports a fully unlocked and overclocked Kepler GK110 GPU in the form of NVIDIA's top GPU, the GeForce GTX 780 Ti, coupled with 3GB of GDDR5 video memory that is rated to operate at the reference clock speed of 7000MHz. 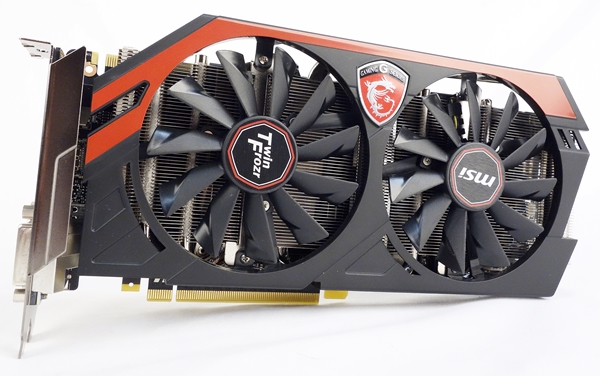 The card has three performance profiles; they are OC, Gaming and Silent modes. It is toggled by an MSI utility called the Gaming App. Right out of the box, the card operates in OC mode, with its graphics core operating at 1020MHz (this puts it on par with Gigabyte GeForce GTX 780 Ti Windforce 3x OC that we've reviewed previously). In Gaming mode, the GPU is throttled down to 980MHz. At Silent mode, the card operates at its default clock speed of 895MHz. 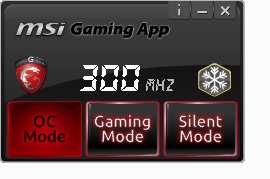 The card sports the familiar red-and-black color scheme of MSI's Gaming series. For its cooling system, it sports the familiar Twin IV Frozr that features dual 100mm fans, and five copper heatpipes in direct contact with the GPU. Heat from the GPU is transferred by the heatpipes to the large aluminum fin grid array, and it is cooled by the pair of fans. In addition, there is a metal plate attached to the PCB's components such as its Hynix memory modules and VRM components for added passive cooling. Despite this, the card still sports a dual-slot profile, and is about 10.5-inch (266mm) in length, with a height of slightly above 5 inches (129mm). 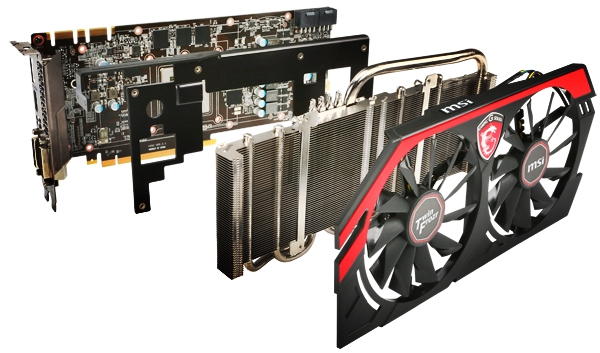 For video connectivity options, it has a pair of DVI ports, one HDMI port and one DisplayPort output.

We rounded up two recently reviewed GeForce GTX 780 Ti graphics cards, from ASUS and Gigabyte respectively for comparison. For its AMD rival, we included the top-end AMD R9 290X "Hawaii" card, in order to have a gauge of its performance standings. Below is the complete list of cards fielded for comparison.

We also tested the MSI card with the most current GeForce drivers, version 332.21, but from our trials, there weren't any discernible performance gains over the previous 331.82 Beta drivers. As such, we've kept to using the previous set of drives for more direct comparisons with the other two GTX 780 Ti cards from ASUS and Gigabyte that were reviewed previously.

A subset of our usual benchmarks was used to determine the gaming performance of the MSI GeForce GTX 780Ti Gaming 3G card since we've reviewed the reference GTX 780 Ti card in detail. The two benchmarks used are as follows:-

The MSI GTX 780 Ti card was tested in its default OC mode, with its GPU rated at a base clock speed of 1020MHz, and turbo boosted to 1085MHz (which should place it on par with Gigabyte). The ASUS card has more conservative clock speeds, with a base value of 954MHz, and a turbo-boosted one of 1020MHz. However, we can see the performance of the MSI GTX 780Ti Gaming 3G is almost mirroring the ASUS card for the Crysis 3 benchmark. It was only for the 3DMark benchmarks that the MSI card pulled ahead of the rest by a very small degree. 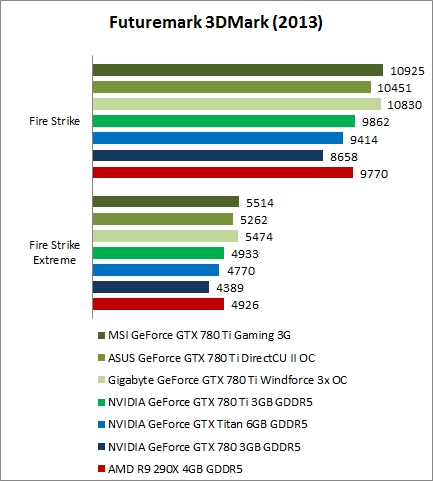 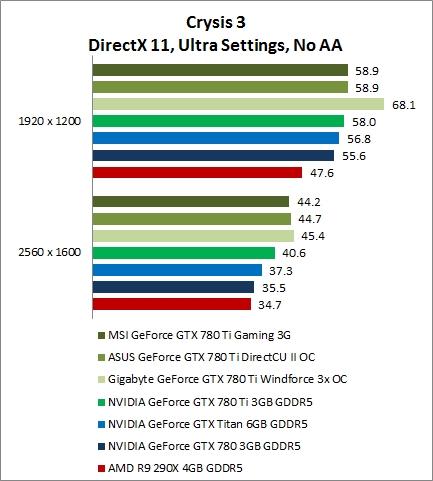 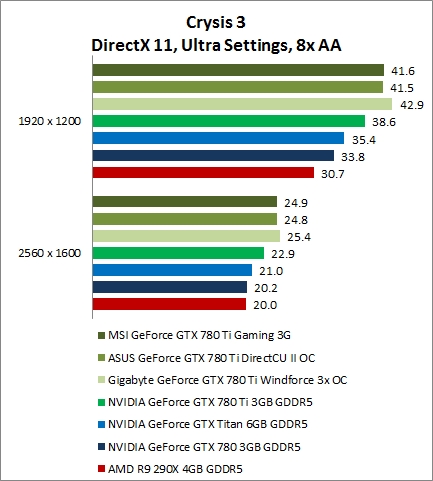 When push comes to shove, the MSI card underperformed the other two 780 Ti cards by a slight margin. 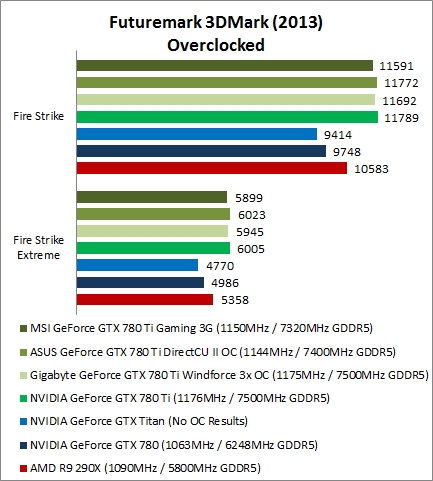 The temperature of the cards during load all hovered at around 60 degrees Celsius. This observation underscores the effectiveness of the cooling systems developed by the add-in card manufacturers. In terms of power consumption, the MSI card recorded the second highest power draw of 462W, just behind ASUS' power draw of 493W. The NVIDIA cards feature NVIDIA GPU Boost 2.0 technology to boost performance by using the GPU temperature threshold, and power consumption as factors. It appears MSI has increased the power limit of its card and it has translated to a very minor gain in its performance, as we had observed during our 3DMark benchmarking efforts. With such minuscule 'improvements', MSI might have been better off to have engineered the card to be more power efficient instead. On the other hand, most would-be consumers of a GeForce GTX 780 Ti graphics card wouldn't have concerns of power savings or efficiency and we're just being strict from our observations. 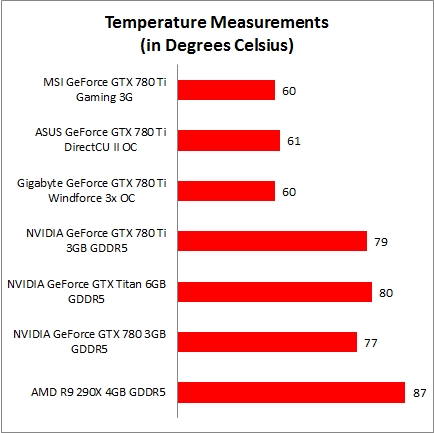 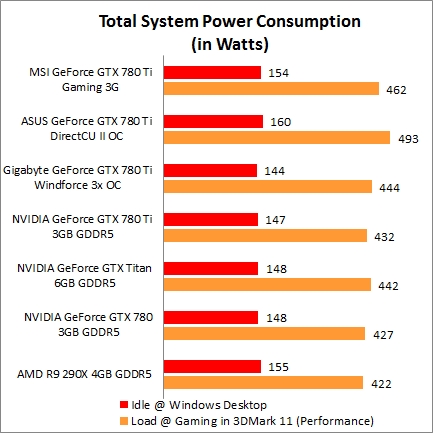 The MSI GeForce GTX 780Ti Gaming 3G has a recommended retail price of S$1,068. A quick check online and it revealed that the Gigabyte competitor has reduced its retail price to approximately S$1,040, which is about S$30 cheaper. ASUS however still maintained its price at S$1,089. 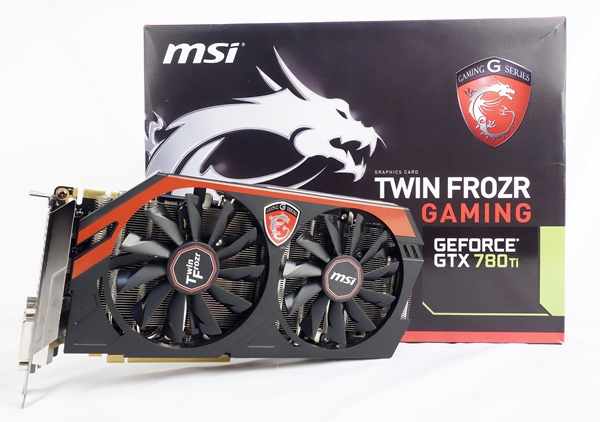 While the MSI card is priced a tad high (in our view), up against its worthy competitors, the card turned in competitive performance but nothing that makes it a standout other than its fiery appearance. Meanwhile, MSI has attempted to further differentiate the card by offerings in-house software utilities like the MSI Afterburner and Gaming App.

All in all, it's difficult to select one custom GeForce GTX 780 Ti over another as each of them ranks well on its own and if you had to make a blind choice, we would suggest going with one that best suits your system/case design elements.

Write a Review
Compare This | Specifications
Good performance
Quiet and effective cooling system
Power consumption higher than expected
Price can be more competitive
Our articles may contain affiliate links. If you buy through these links, we may earn a small commission.
Sponsored Links