Motorola Moto X (2014): From mid-range to premium flagship in less than a year The original Moto X finally made its way to Singapore earlier this year. While we were impressed with its snappy handling, sleek design and innovative software features, by the time consumers were able to actually get their hands on it, it felt a bit dated. It's Snapdragon S4 Pro chipset was passable, but quickly falling behind the competition and, while its AMOLED display was decent enough, at 720p it didn't have the clarity of newer Full HD displays. This time around, however, we won't have to wait for the new Moto X, which will soon be available in Singapore (we're still waiting on the exact release date). The new Moto X has an updated design, a larger 5.2-inch Full HD display, a flagship-level Qualcomm Snapdragon processor, and better voice and gesture commands, all while retaining its near stock Android OS.

Like the first Moto X, the new X has a curvy form factor, with a rounded rear that makes it a pleasure to hold. It's one of the most pronounced tapers we've seen, going from 10mm at the thickest part, in the middle where the headphone jack is, to a razor thin 4mm at the edges. While we complained that the iPhone 6's thin edges made it feel a bit uncomfortable in hand, the Moto X has no such problems, thanks to its sizeable hump, which provides a generous surface area for your hand to grip.

Motorola has also upped its build quality, ditching the all-plastic trim from the original X in favor of a dark gray aluminum band that runs around the edges of the phone. On the front of the phone, the new X also sports a Corning Gorilla Glass 3 panel, which, like the iPhone 6 and Microsoft's Lumia flagships, has a gentle curve at the edge and a seamless gap-free finish. The net result is a denser, more premium feel that bumps the Moto X up to flagship-level territory.

In the US, you have the option to go even further with the premium look and feel, as Motorola offers a number of customizable options at purchase with its Moto Maker store, including leather backs (made from real Chicago-sourced Horween leather mind you, not that faux stuff found on the Samsung Galaxy Note 4), and a real bamboo wood back. A white front is also available (Singapore will only be getting the black model). 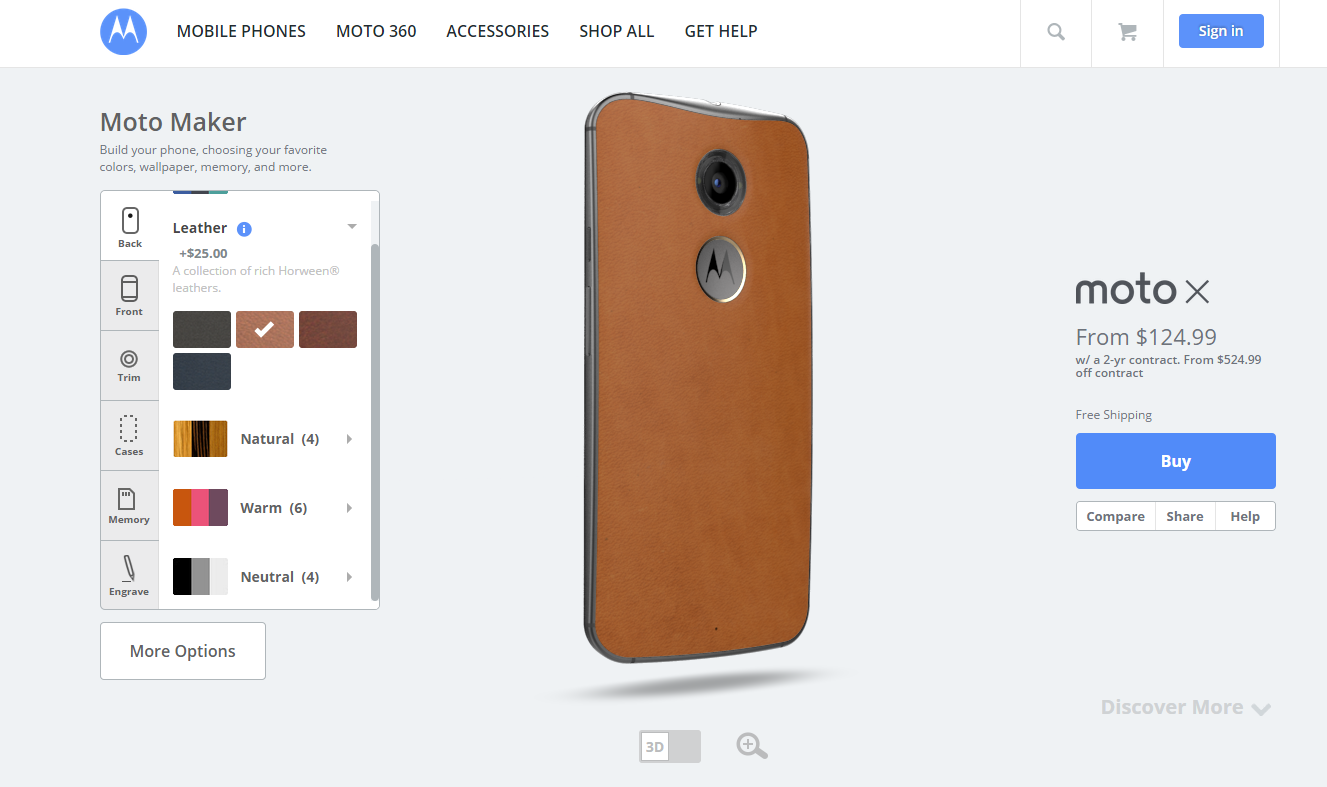 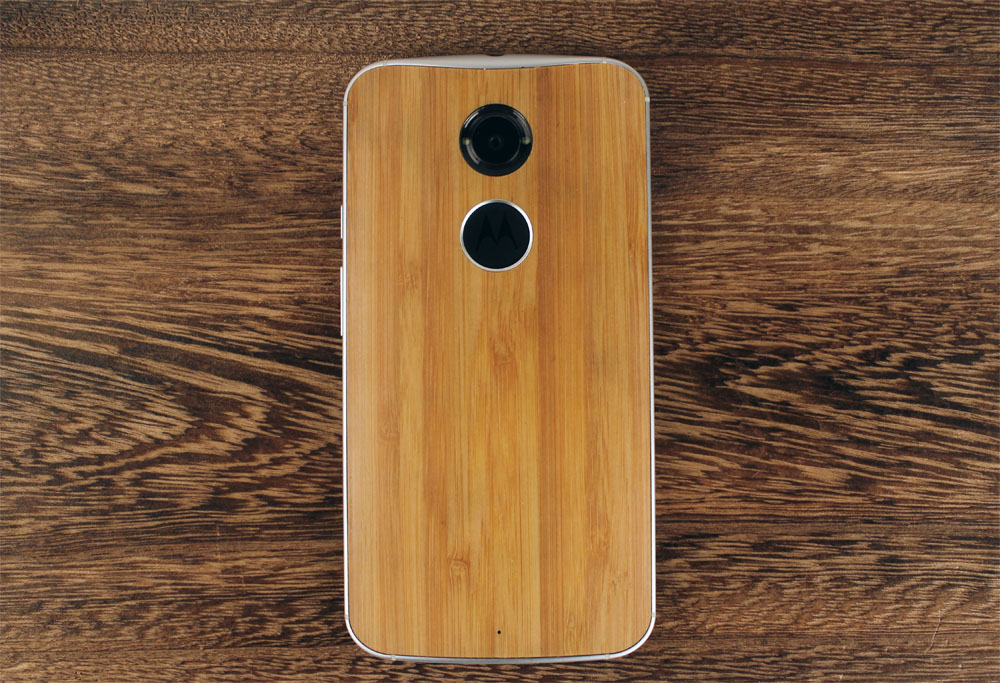 Unfortunately, local models will only be available with a plain matte black plastic back. The black back isn't as nice as leather or wood, but it still looks fairly smart, and the rubberized finish provides a nice non-slip grip. On the downside, it picks up smudges and stains from oily fingers very easily. 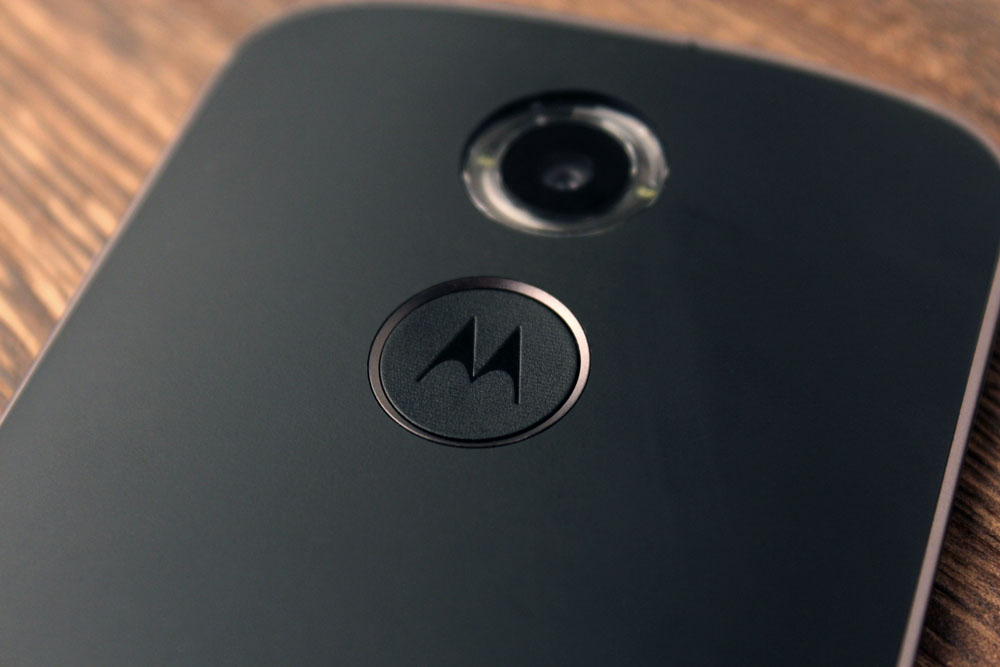 On the right-edge of the phone, you'll find the power button and volume rocker in the form of thin slivers of painted plastic. The power button is ridged, while the volume rocker is smooth, providing some useful tactile feedback that lets you quickly find the right button just by feel. The buttons themselves feel solid and sturdy, with a reassuring firmness and weight when you press down on them. The micro-USB port can be found on the bottom of the phone, while the headphone jack is positioned at the top next to the nano-SIM card tray (which requires a pin to eject). There are no other buttons on the phone, with the home, menu and back buttons all being the virtual on-screen type.

Thanks to Motorola's use of soft keys for navigation, the front of the phone is nearly all display, with just a small block of black at the top and bottom for the speaker grilles. The display itself is a big step up from last year's model, both in overall size (going from 4.7-inches to 5.2-inches) and in clarity, going from 720p resolution to glorious Full HD. The AMOLED display is one of the best we've seen, with deep blacks and crisp whites, and vivid colors that aren't as over saturated as some of Samsung's Super AMOLED displays, but still bring enough pop to pictures. Viewing angles are also excellent, with near to 180-degree viewing without loss of color or brightness. The only real complaint is that the Gorilla Glass panel is very reflective, which makes the phone a bit hard to use under bright sunlight. 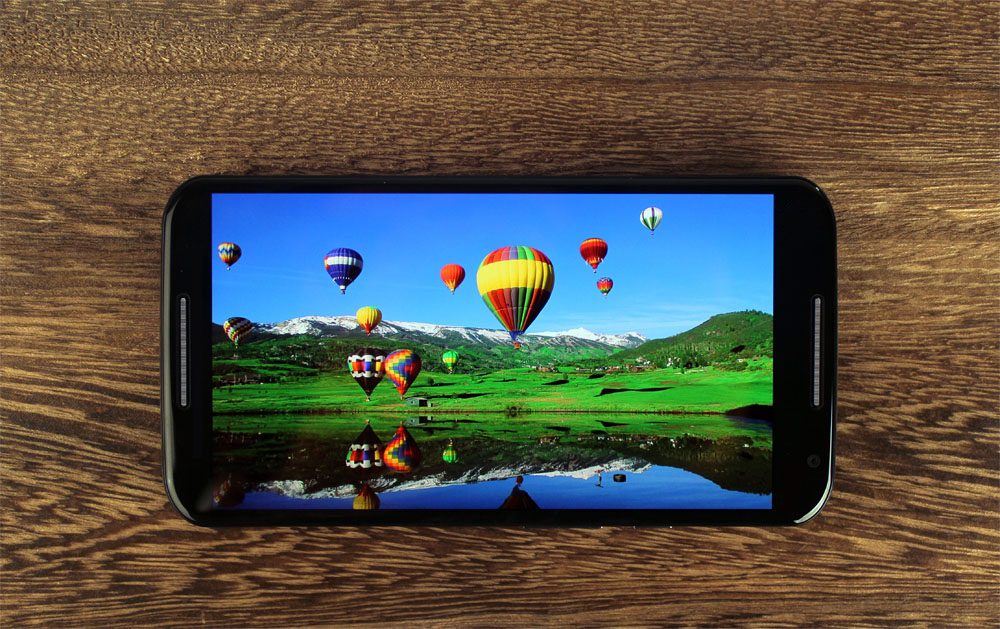 The Moto X sports one audio speaker, which can be found right under the display (the one on top is just for making calls). It's fairly loud, and clarity is reasonably good, but it's no match for the stereo speakers found on the HTC One (M8) and Sony Xperia Z3. While overall audio performance wasn't bad, I was still kind of disappointing that the X doesn't boast dual speakers, especially when the cheaper Moto G smartphone does.

Like the original Moto X, the new X runs on almost completely stock Android. The phone comes pre-installed with 4.4.4 KitKat and you'll be able to upgrade it to Android Lollipop as soon as it becomes available. I say "almost stock" because, like the previous X, Motorola has added some clever features to the phone.

Moto Actions involves a small cluster of IR sensors on the X's face, positioned at all four corners of the phone. They're actually invisible on the black model, but you can spot them on the white model (which is only available in the US). The IR sensors let you wave your hand over the screen - the range is about 25 cm -  to silence an incoming call or snooze an alarm. You can also do the same hand wave motion to turn the screen on to check notifications on the lockscreen. When you've got the phone in your hand, Actions also lets you make a twisting motion with your wrist to automatically activate the camera.

It's a little gimmicky, but I can't deny that I loved making that Jedi hand wave action as often as I could. Moto Display is a feature that takes advantage of the AMOLED display's ability to only turn on selected pixels on the display. The X uses this to show notification icons from the lock screen. You can then jump straight into the related app by swiping these icons. As the AMOLED display is only powering the pixels for the notification icons (as well as the time) it won't drain your battery.

The final piece of wizardry Motorola has thrown into the X is its ability to listen for voice commands even when the screen is off. While Google added an always listening option for all Android devices as part of its Google Search update at Google I/O earlier this year, that still requires your phone display to be turned on before it will respond. The Moto X on the other hand, has a chip that lets it listen all the time, even when the screen is off. Additionally, while you used to have to utter "OK, Google" as the key phrase, you can now define your own command phrase. As a fan of Motorola back in the day, naturally, I went with "Hello Moto". 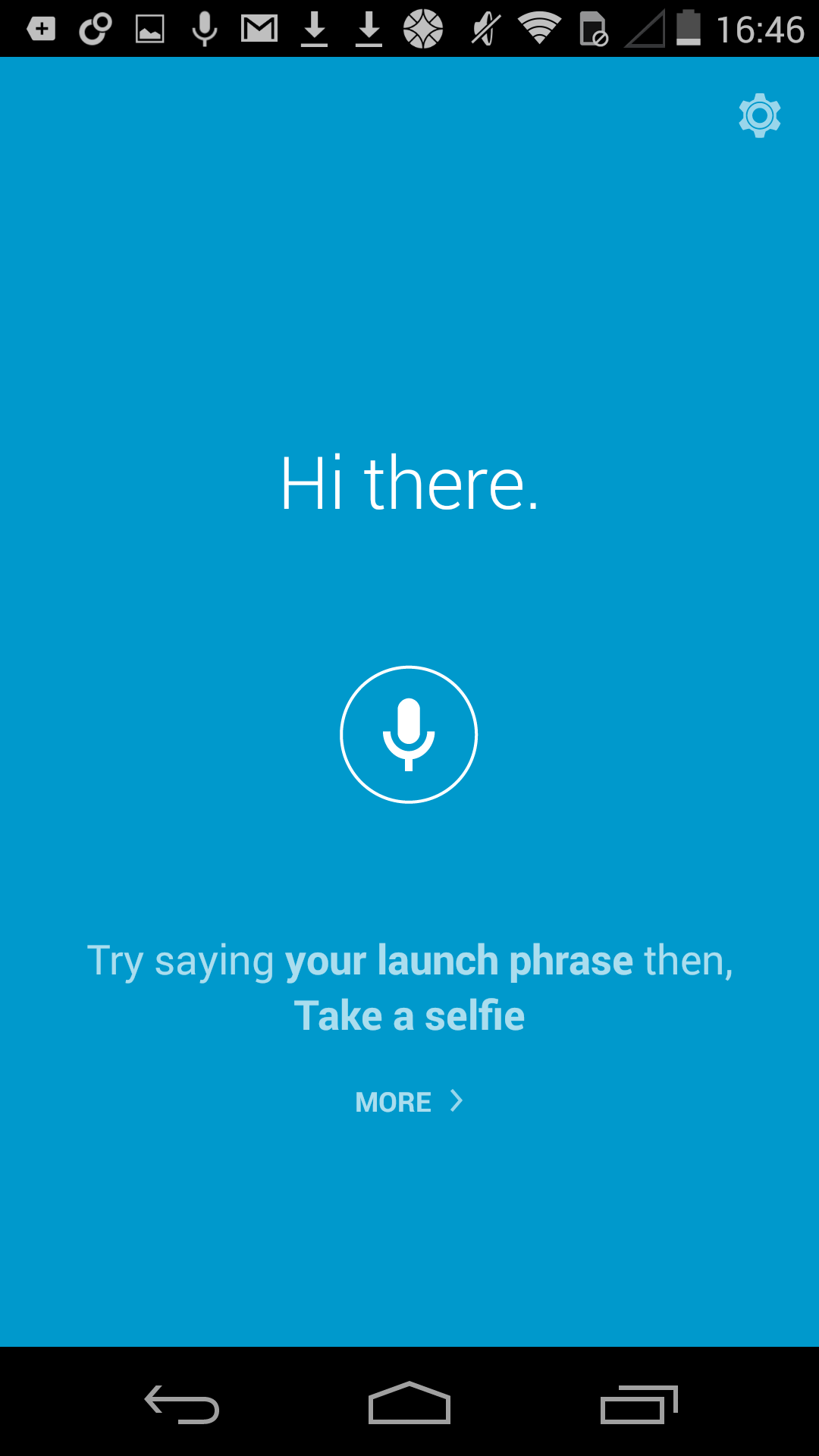 On top of searching Google with your voice, you can issue voice commands for setting alarms, reminders, make voice calls, ask it questions about the weather and as a neat extra, I've found that you can also use it to locate your phone. You see, I have a habit of putting down my phone and then forgetting where I put it moments later. For example, last week, having misplaced the Moto X, and failing to locate it, I sheepishly tried calling out "Hello Moto?" and sure enough, it sprung to life under a small pile of mail i'd carelessly dumped on top of it, chirping out with an audio cue. I generally haven't gotten along with the many digital assistants I've tried, but I actually found my time using the Moto X to be quite refreshing. Not having to turn on the screen means that you can leave it on your desk and just bark out commands and it will respond accordingly. It almost feels like having a real personal assistant. Its microphone is surprisingly good too, so you don't have to get too close to it to relay your orders, or enunciate really slowly like you're chatting with some partially deaf octogenarian.

The only downside is that, for all of this to work, you need to leave your phone unlocked. Otherwise, you'll be prompted to unlock your phone each time you want it to do something. That could be a deal breaker for some because once you have the the phone in your hand, you probably can engage or perform your required tasks quicker than voicing them out and having to check if the device did perform the intended function in proper. Someone needs to come up with a software enhancement so that some of the non-invasive functions can be performed without unlocking your device.