Motorola Moto G Review - The Phone to Connect the Millions

Since Google completed its acquisition of Motorola Mobility in May 2012, much attention had been focused on how Google planned to revigorate the Motorola brand under its wings.

Google wasn't very pleased with Motorola's products in the pipeline, and hired former Apple chief evangelist Guy Kawasaki as an advisor to the Motorola brand to focus on “product design, user interface, marketing, and social media”.

The collaboration between the two companies led to the unveiling of the Moto X, which Motorola claims to be "the first smartphone that you can design yourself" via MotoMaker. Unfortunately, the Moto X is currently only available in the U.S.

Back then, we were told specifically that the "Moto X is just the first device in a new portfolio of products that show the best of Motorola as a Google company" and that Motorola has "exciting plans for all regions". Three months after the launch of the Moto X, Motorola unveiled the global and more affordable Moto G. And as we just reported, this phone would very soon be available in Singapore. To start off the review, here's an overview of the specs of the two phones:

The Moto G sports a clean design with rounded corners, a tapered back and all buttons (power and volume control) are on the right side. This design philosophy breaks away from the norm where the power button is at the top left or right (in the case of the HTC Desire 601), or volume controls that are located on the opposite side of the power button (like the Samsung Galaxy S4 Mini). This isn't necessarily a bad thing as it prevents your fingers from reaching all over the phone to reach the buttons, and as they say, it really boils down to personal preference.

Tapered backs are our favorite and the Moto G certainly lands itself on our list of palm-friendly devices. Unlike its rivals such as the LG Optimus F5 and Galaxy S4 Mini which have flat backs, the Moto G rests very comfortably in our hands. It also helps that the matte back cover gives a better grip than the typical glossy plastic surfaces that other phones of its class generally have. 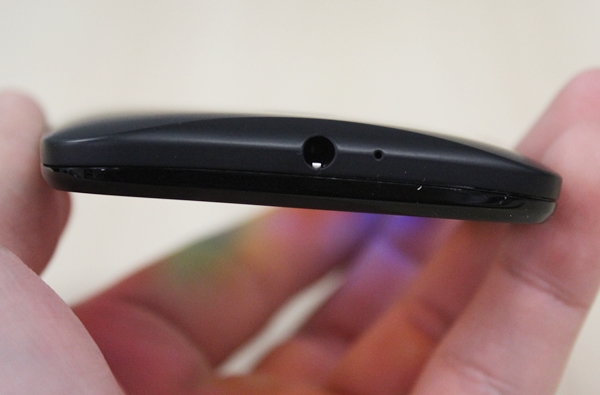 Strangely though, Motorola uses two different kinds of plastic for the Moto G's chassis: a glossy one for the front and a matte one for the back. This reminds us of the LG Nexus 5, which employs different materials (and hence, different feels) for the white and black models. It's not a deal breaker or a concern, but we feel that the design could have been more uniformed. Overall, the build quality is good for the price you are paying.

No Moto Maker, But You Have a Splash of Colored Accessories to Choose From

Motorola made headlines with the MotoMaker for the Moto X, which allows customers to personalize the phone from the front to the back to the accent colors of the buttons. Sadly, this level of customization is not available to the Moto G.

The most likely reason is the fact that the Moto X is designed, engineered and assembled in Fort Worth, Texas. Motorola believes that there are several business advantages such as the ability to iterate on design much faster. It will be a huge undertaking for the company if it builds factories in the different regions where the Moto G is being sold.

Nonetheless, Motorola still managed to inject some degree of customization for the Moto G by offering a diverse range of colored accessories to match your tastes. For example, the back cover of the Moto G can be replaced with any of the colored grip or flip shells (blue, teal, red, yellow, purple, white, and black - take your pick).

We were told by the local distributor, Brightstar, that the flip shells will be available at launch for the Moto G. The current retail price of the shells is US$29.99. Brightstar is unable to provide the local retail price at time of publication.

Removing the back cover is done by placing your fingernail into the micro-USB port at the bottom and pulling it. The method is simple, but requires a fair amount of strength to execute. 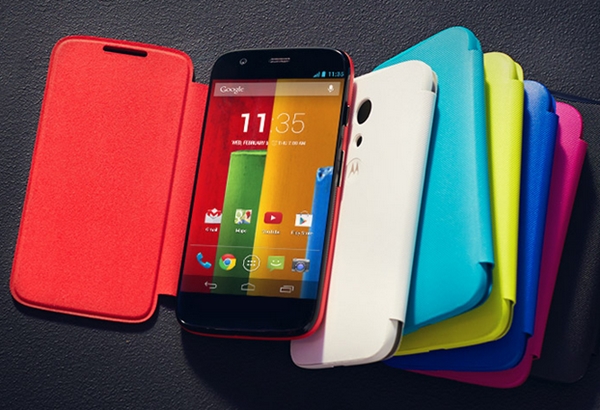 Sharpest 4.5-inch HD Display in Its Class. No Kidding.

When one speaks of a phone in this price category, the common perception would be significant trade-offs in the display, processor and build quality of the device. We've discussed how that is not true for the design and build quality, and now we are debunking the next mistruth - the display.

Despite its price tag, the Moto G comes with a decently sized 4.5-inch screen with a 1,280 x 720-pixel resolution. To put that into perspective, the result is that the Moto G has a slightly higher pixel density (329ppi) than the Apple iPhone 5S and 5C (326ppi). Not that the difference is anything to shout out about though; just that none of the small screen Android phones from other major vendors comes close to the Moto G in this regard except the 4.6-inch Sony Xperia SP (319ppi) and the just announced 4.3-inch Xperia Z1 Compact (we're pretty sure the latter costs quite a bit more too).

After using the Moto G for a few days, we really like the display for its accurate colors and good viewing angles. In short, the display of the Moto G is impressive and exceeds our expectations. Its also makes the Moto G very easy to handle with one hand.

There is but one oddity in Motorola's marketing campaign for the display of the Moto G. Calling it "an edge-to-edge display" that "stretches to all four corners of the phone" is an exaggeration and probably not fair to the LG G2. In reality, the bezel around the display is no different from what we've seen from other smartphones. If you want to know how an edge-to-edge display looks like, the G2 is a solid example as it boasts an insanely thin 2.65mm bezel.

At the launch event of the Moto G, Motorola stated that it strongly believes in providing a pure Android experience without the resource-hogging customized interfaces of other Android devices. In doing so, Motorola believes that the experience can complement Google's services, not compete with them.

Having said so, the Moto G ships with Android 4.3 Jelly Bean and is guaranteed an upgrade to Android 4.4 KitKat this month. At time of publication, our review unit has yet to receive the update.

For users who are switching from other Android vendors, the almost stock interface may seem a tad bare for them. The Moto G is stripped of the bells and whistles that other Android devices have, such as HTC's BlinkFeed, Samsung's Multi-Window, Sony's Small Apps and LG's QSlide. If any of these is a matter of life and death to you, the Moto G isn't for you.

The Android interface isn't entirely stock though. Any seasoned Nexus user will also notice the addition of two Motorola apps, Moto Assist and Moto Migrate. The camera interface is also different, and this will be discussed in the camera section later.

In a nutshell, Motorola Assist suggests actions to automate tasks, based on how you use your device. It allows you to automatically reply to texts when you're driving, silence your ringer during meetings, and more.

Motorola Migrate on the other hand helps you transfer photos, videos, music, volume, screen brightness settings, call and text history as well as SIM contacts from your old Android smartphone to the Moto G. Migrate only transfers data from devices running Android 2.2 (Froyo) and above, to Motorola phones running Android 4.2 and above.

According to Motorola, it takes about 10 minutes to transfer 2GB of data. The Moto G sold in Singapore is the 8GB version, which has about 5.52GB of user available storage after updating the stock Android apps. Hence, watch out for the amount of data that you can transfer from your old phone to the Moto G. We did give Motorola Migrate a try with our Nexus 4, and found the entire process to be smooth and straightforward. If you are a regular user of Google Drive, you will be glad to know that Motorola offers 50GB free storage for two years.