In terms of form factor (tablet with the option of attaching a keyboard) and specs (Intel HM77 chipset, Core i5-3317U 1.7GHz CPU, SSD), the closest competitor to the Surface Pro is the Samsung Ativ Smart PC Pro. But there are also several other Windows 8 Ultrabooks that sport very similar specs; the main differences being their form factor (many of them are convertibles, which means that while the keyboard isn’t detachable, it can be flipped entirely over or tucked underneath the screen) and screen size. Below is a list of the devices we’re pitting the Surface Pro against.

Futuremark's PCMark 7 is a popular benchmarking tool for testing all aspects of a PC, from storage and computation, to image and video manipulation, Internet browsing, and gaming. The Surface Pro managed a chart-topping score of 4,921, some 900 points higher than the Samsung Smart PC Pro. In truth though, we hardly noticed any sluggishness during real world use for the latter. Unsurprisingly, Microsoft's tablet also fared well against the other Core i5-equipped convertible Ultrabooks. It even came close to the Core i7-equipped Sony Vaio Duo 11. 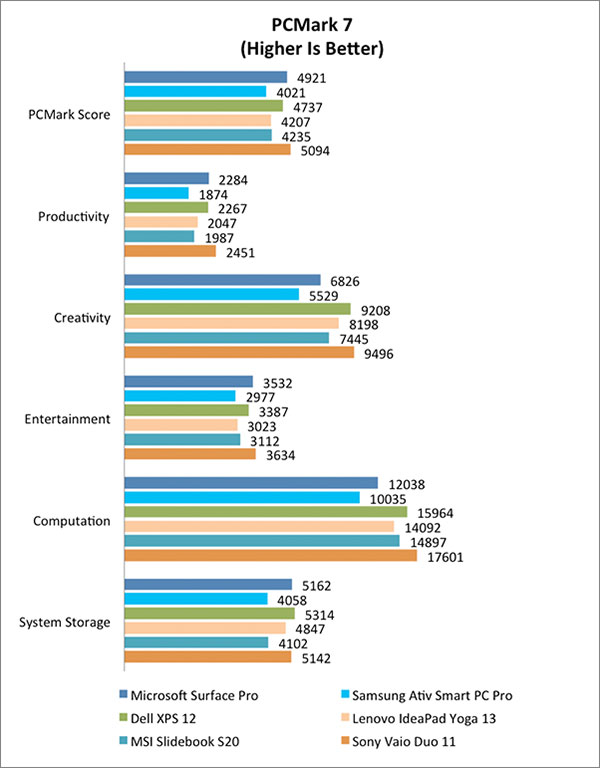 3DMark 11 is used to measure the graphics performance of PCs, and is popular among those who want to know the performance of their DirectX 11-capable gaming PCs. While the Surface Pro isn't marketed as a gaming notebook, we still gave it the 3DMark 11 treatment to see how it stacks up against other similarly spec'd notebooks.

Expectedly, the Surface Pro turned in a 3DMark 11 result that's in line with other Intel Core i5 notebooks that use the integrated HD 4000 graphics engine. In other words, hardcore gamers need not apply. Sure, you can play Portal 2 on the Surface Pro, but you probably wouldn't want to use the highest settings unless you enjoy a stuttering gameplay. But if you're looking to take a break from a day's work with a quick World of Warcraft session, the Surface Pro hums along just fine on the 'Fair' preset. 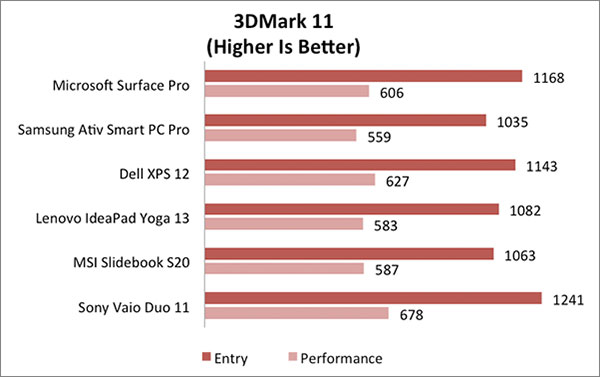 For another point of reference, we used Far Cry 2, a DirectX 10 title, as a framerate benchmark; this time, running at a more sane resolution of 1,024 x 768. Our conclusion that the Surface Pro is a decent casual gaming system (like most Ultrabooks) remains. 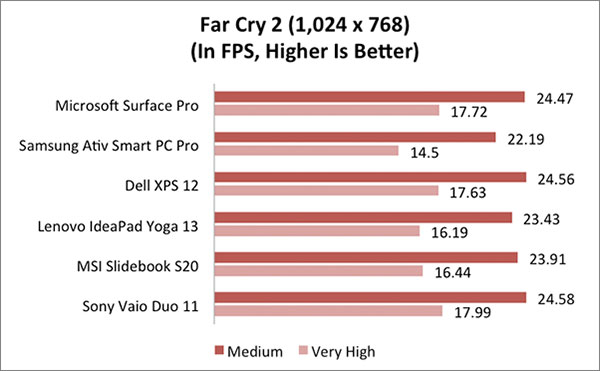 By the way, the Surface Pro supports the Xbox 360's wired controller. Unfortunately, there's only one USB port on the tablet. You can use a wireless controller, but that too requires you to connect a receiver to the sole USB port.

'No compromise' is the buzz phrase that Microsoft has been using for Windows 8. Designed for both touch and keyboard/mouse use, it enables all sorts of hardware form factors. In Microsoft's own words, the Surface Pro is 'a powerful PC in tablet form'. We already know that it possesses superior horsepower compared to ARM-based tablets, but does that matter to browser performance? For that, we turn to SunSpider, a web-based benchmark that tests the core JavaScript language. For this test, we pitted the Surface Pro against several ARM-based tablets; each device's stock browser was used.

In a nutshell, the Surface Pro is a super-fast tablet. But the result really shouldn't come as too much of a surprise: after all, the Surface Pro is essentially a PC, packing the raw power of an Intel Core i5 CPU. Of course, the practicality of using it like how you'd with an ARM-based tablet is another story, no thanks to its weight and bulk. But remember, while ARM-based chipsets (from the likes of NVIDIA, Qualcomm, Texas Instruments, Apple) are getting more powerful all the time, Intel's processors too are getting increasingly more energy efficient. The possibility of a Surface Pro with the thickness and weight of a Surface RT, with power consumption and battery life comparable to ARM-based tablets is very real in the next couple of years.