The unit I’m testing is powered by the Core i7-1185G7, one of the most powerful mobile processors in its class. It has 16GB of memory, 256GB of storage, and Intel Iris Xe graphics. Older Surface Pros were susceptible to heat soak and throttling and Microsoft sought to rectify this in the Surface Pro 8 by giving it a beefier cooling system. It uses a vapour chamber paired with three heat pipes that dissipates heat to three graphite heat spreaders. Let’s see if this new system works. Naturally, I’ll be comparing its performance against other ultraportable notebooks in its class like the recently reviewed HP Spectre x360 14, ASUS ZenBook 14X OLED, Lenovo Yoga Slim 7i Carbon, and more.

Here’s how it stacks up against its rivals:

The Surface Pro 8’s performance was decent. On CPU intensive benchmarks like Geekbench and Cinebench, its multi-core scores were above average. Graphics performance, which used to be the Achilles’ heel of older Surface Pros, was also quite positive. Though the frame rates achieved on Tomb Raider were actually average, it resisted throttling well even after multiple runs, which suggests that Microsoft’s new cooling system works. Take a look at this old review to see how bad throttling can be in older models. Furthermore, the Surface Pro 8 remains surprisingly quiet even under heavy loads.

The only point of concern is its poor storage score on PCMark 10. Here, it managed just 535 points and its average speed during the test was just 84.53 MB/s – well less than its rivals. Consequently, its PCMark 10 scores were negatively impacted. I investigated the issue further by copying files to and from the drive and found that performance in the real world was acceptable. Using a Thunderbolt external SSD, I could write to the Surface Pro 8’s SSD at speeds of up to 1GB/s. Crucially, in normal use, I never felt that the drive was limiting the device’s ability to perform. 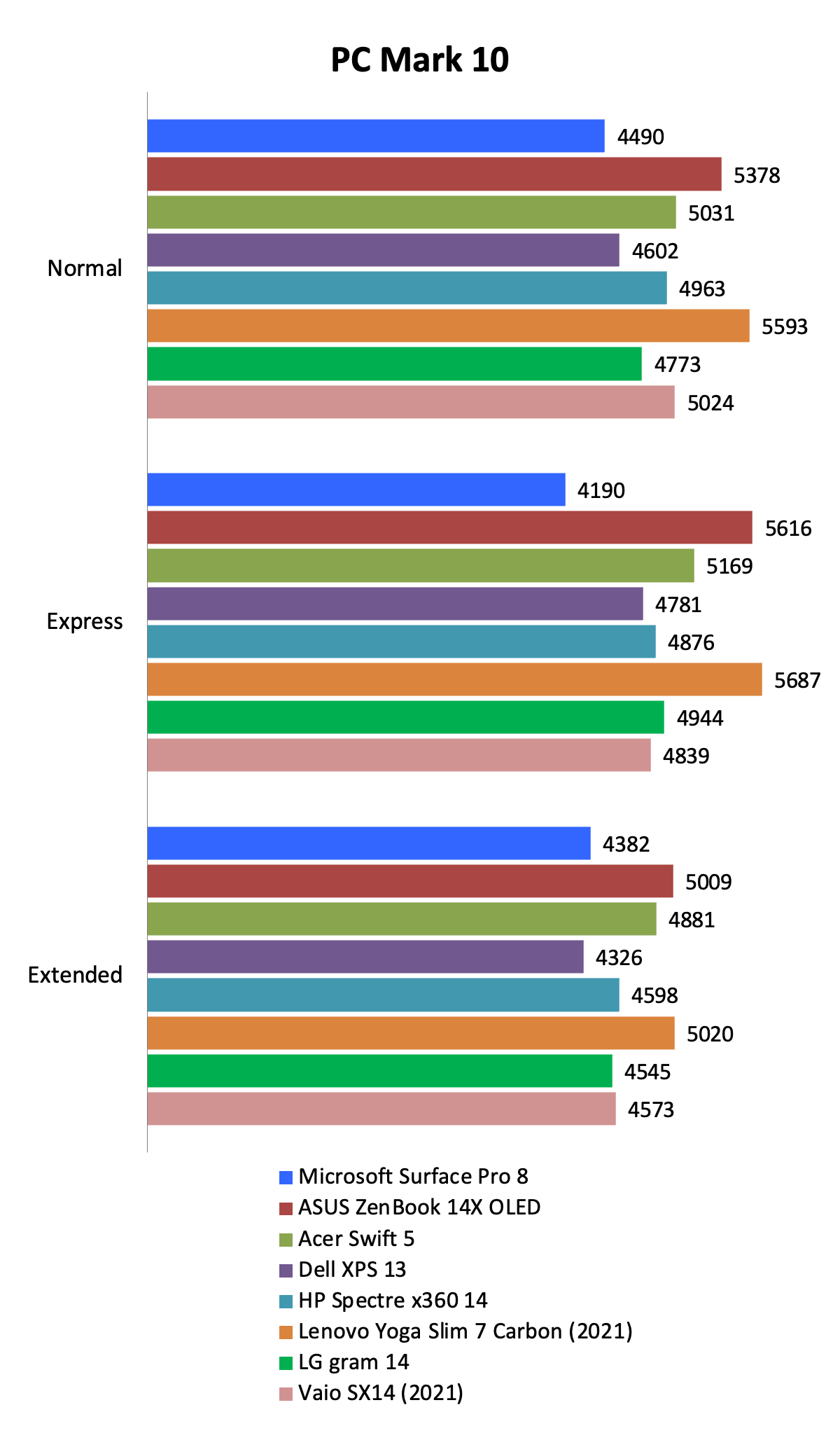 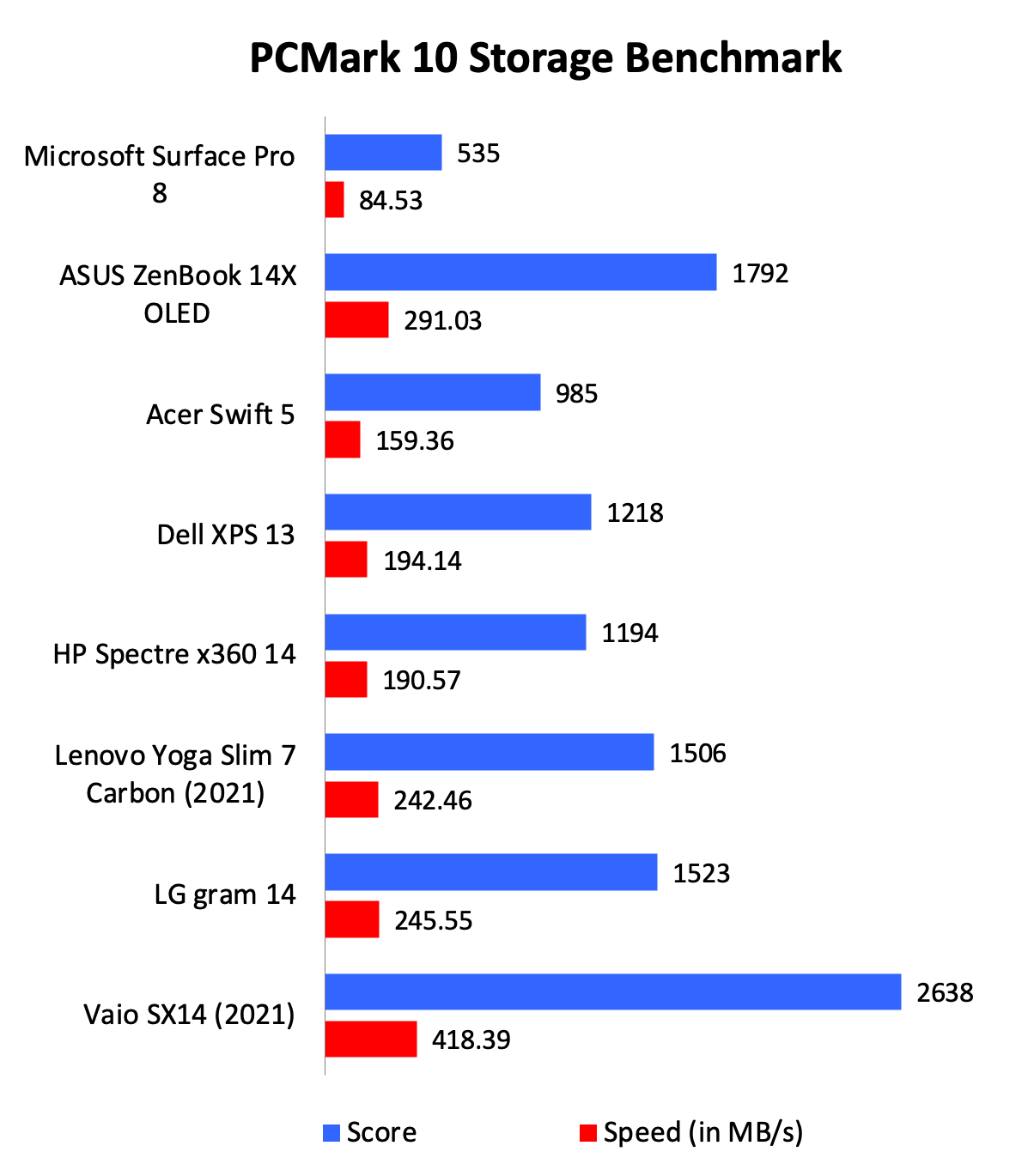 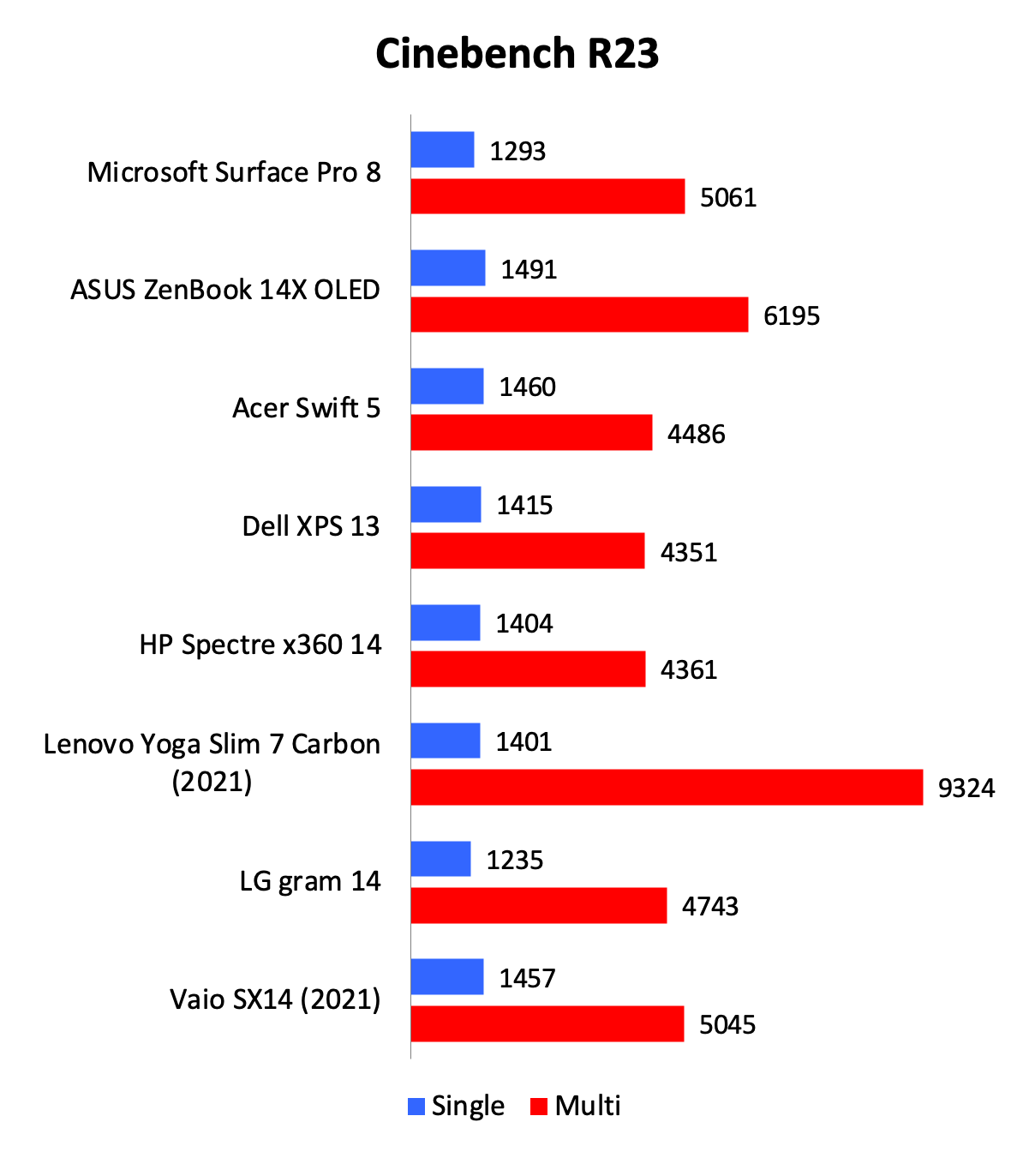 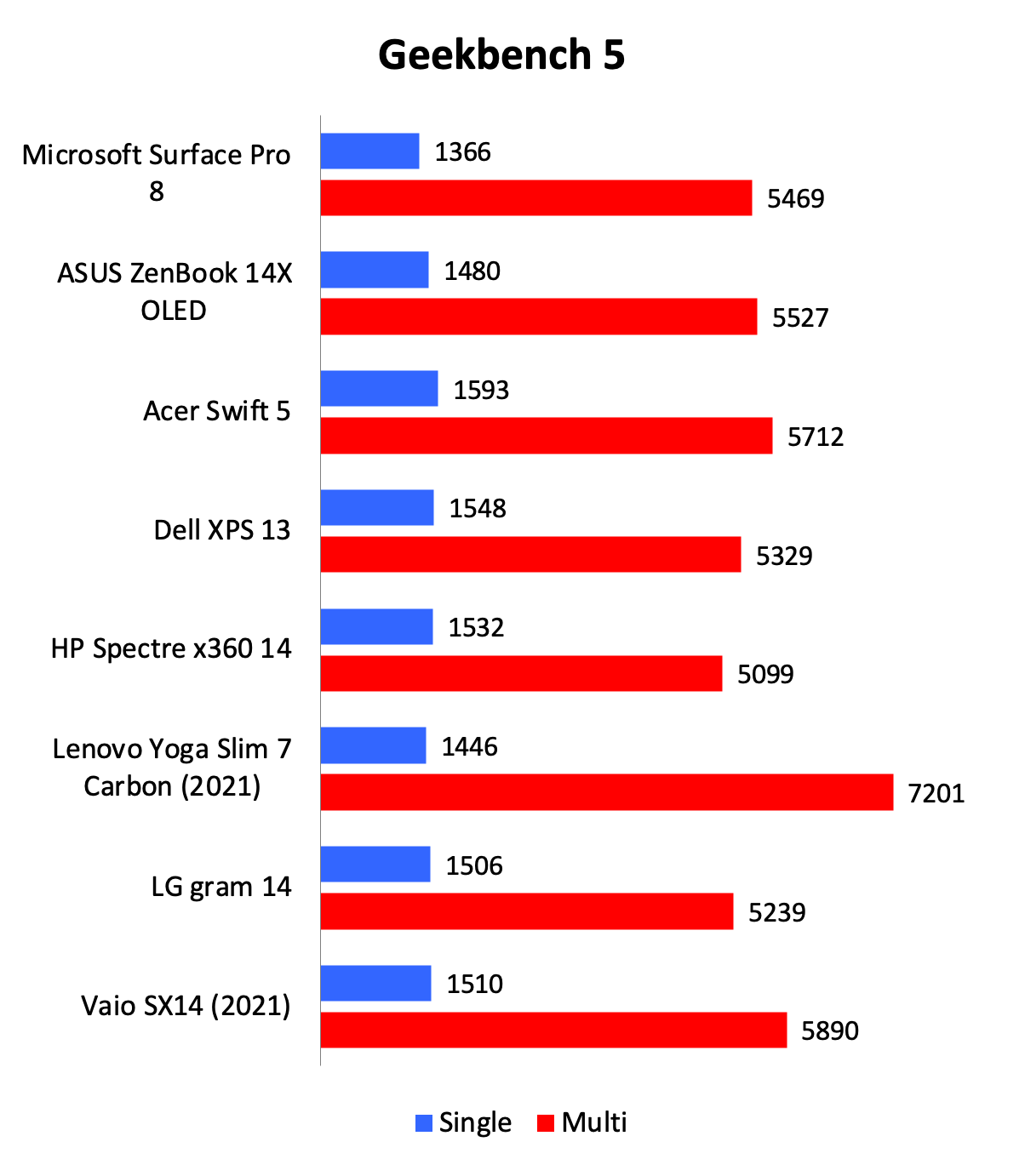 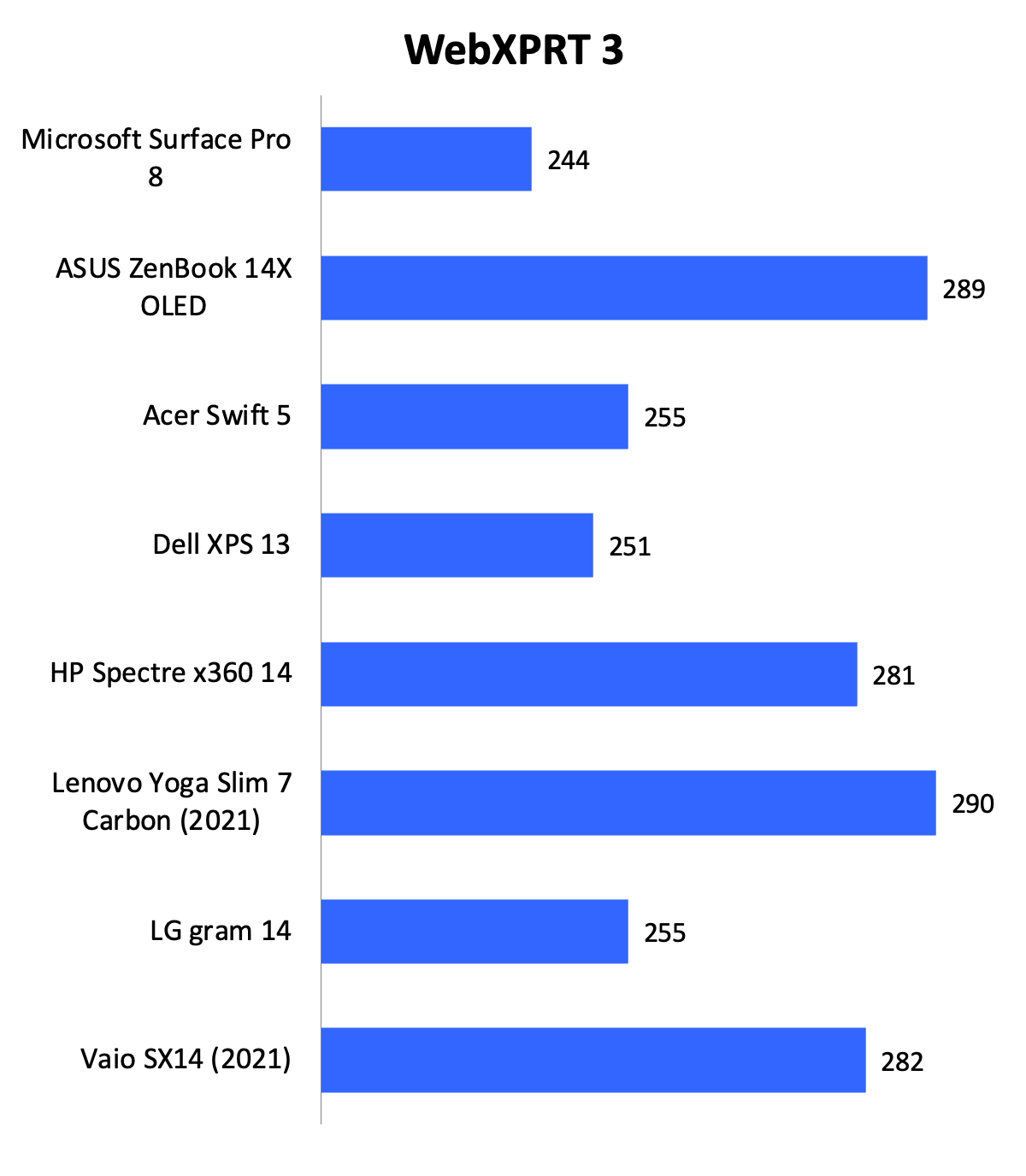 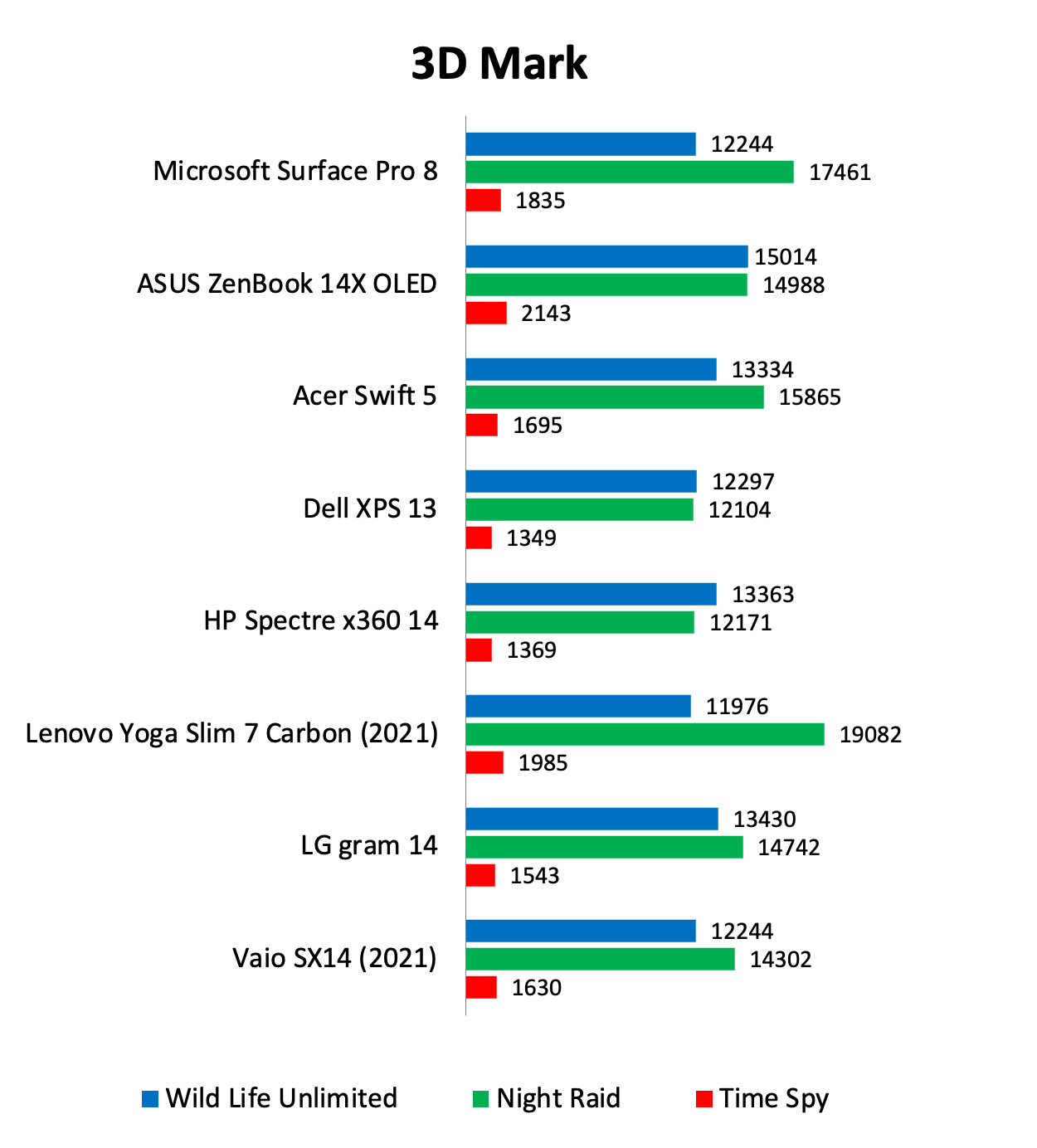 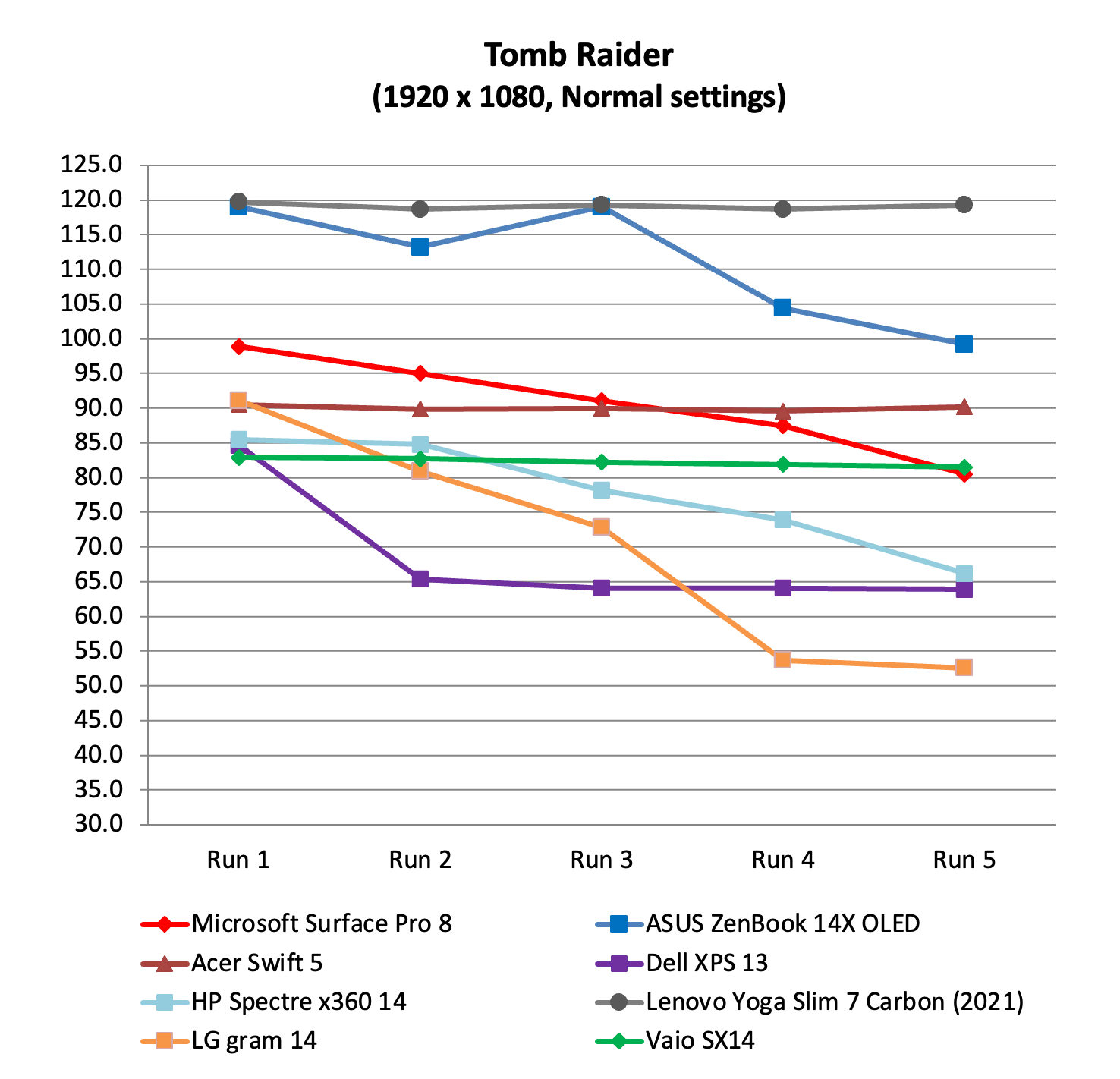 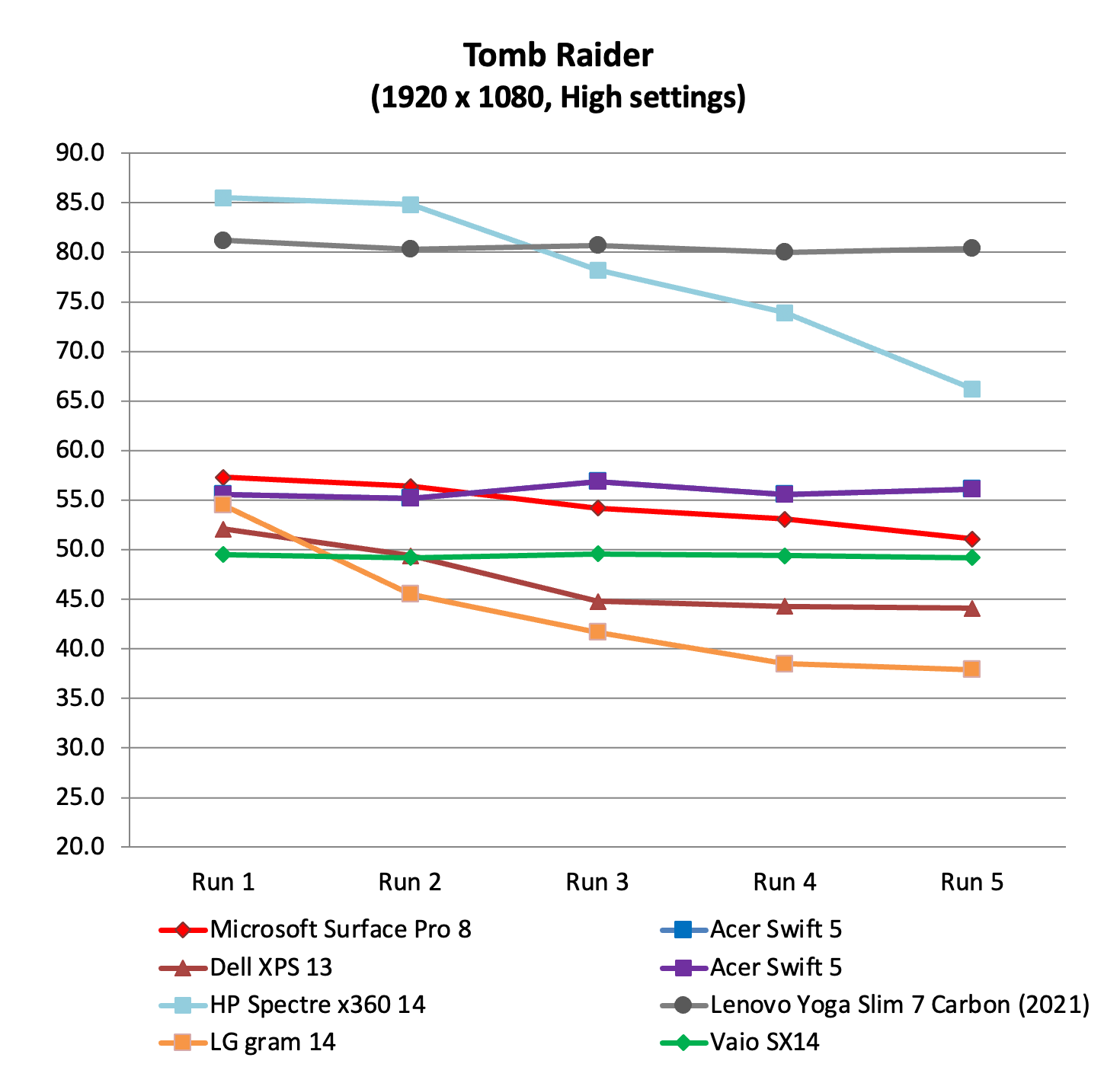 Battery life is definitely one of the Surface Pro 8’s strong suits. Despite having the smallest battery (by a small margin), it managed to run for just over 9 hours on the Modern Office benchmark which consists of tasks like emails, spreadsheets, video conferencing, and light gaming. Gaming battery life was also quite good seeing that it lasted over two hours. And if we take into account its dimensions and weight, it’s clear that it scores highly on our Portability Index. Bear in mind that these numbers account for the additional heft of the Signature Keyboard. All in all, the Surface Pro 8 is clearly a good performer insofar as battery life is concerned.

The caveat, however, is that the battery tests were done with the screen set to its 60Hz refresh rate. I repeated the Modern Office benchmark with the screen’s refresh rate locked at 120Hz and found that it lasted around 7 hours and 20 minutes, which is a reduction of around 20%. That’s still a decent showing, especially when you remember that these tests were all done at maximum brightness. 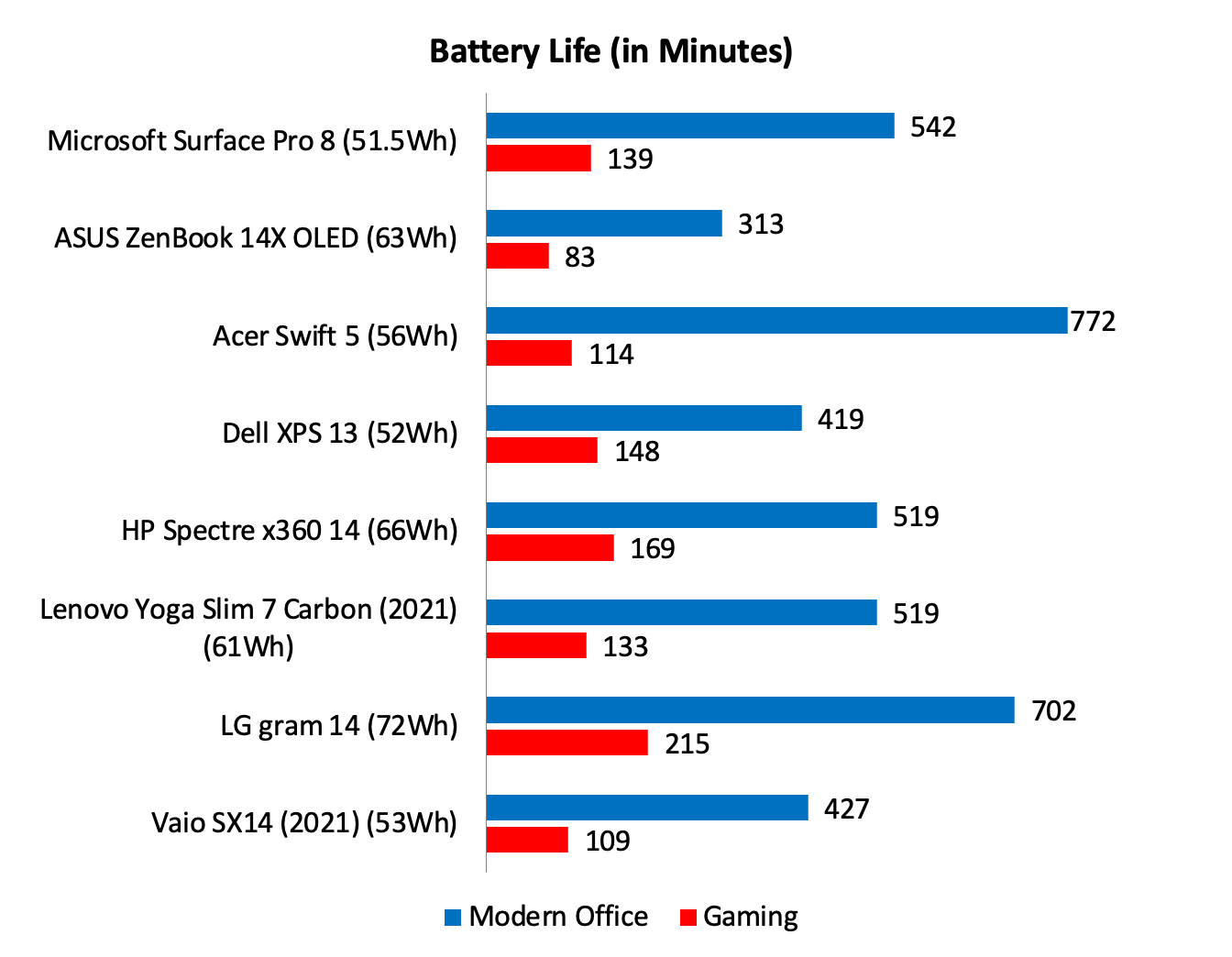 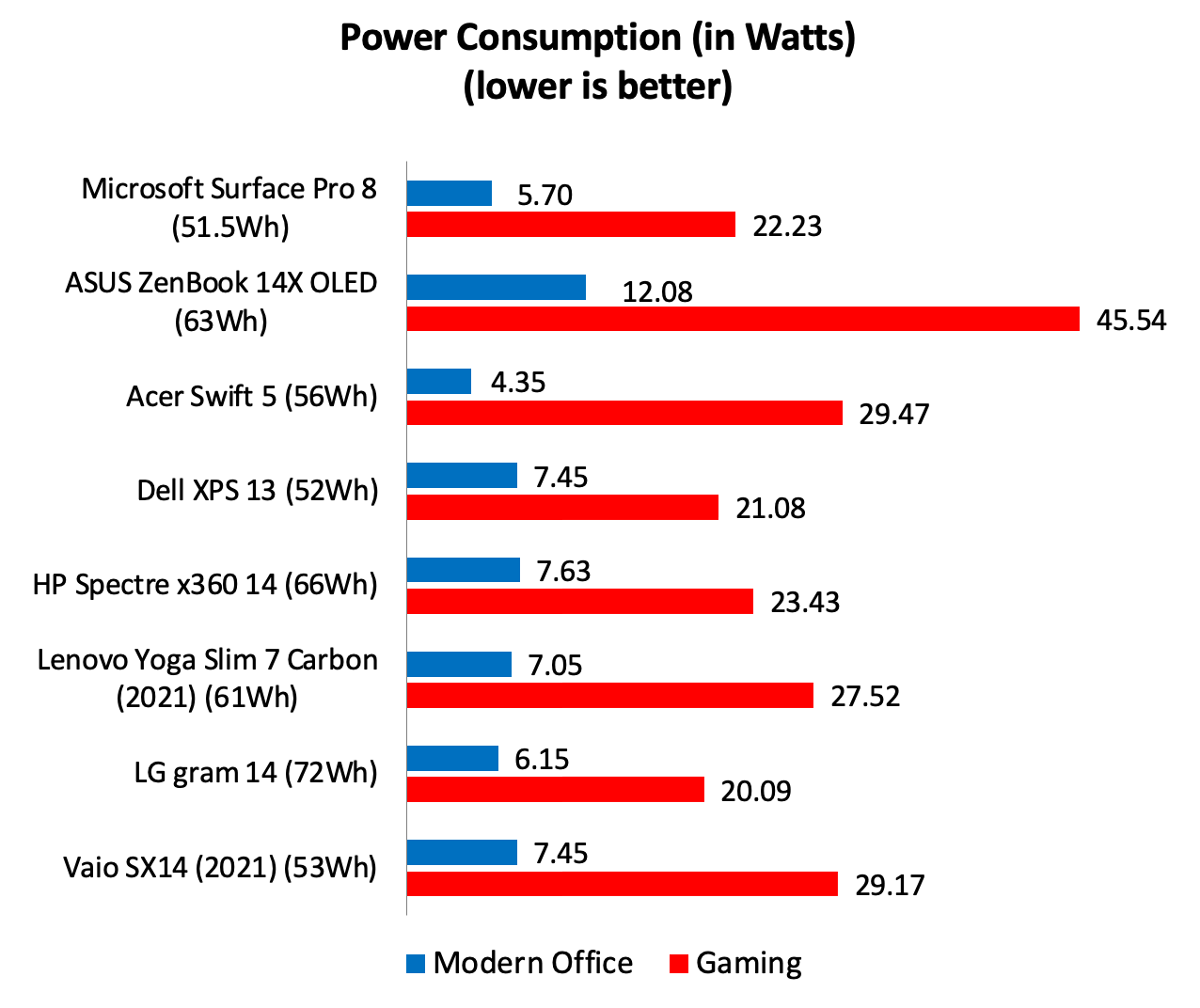 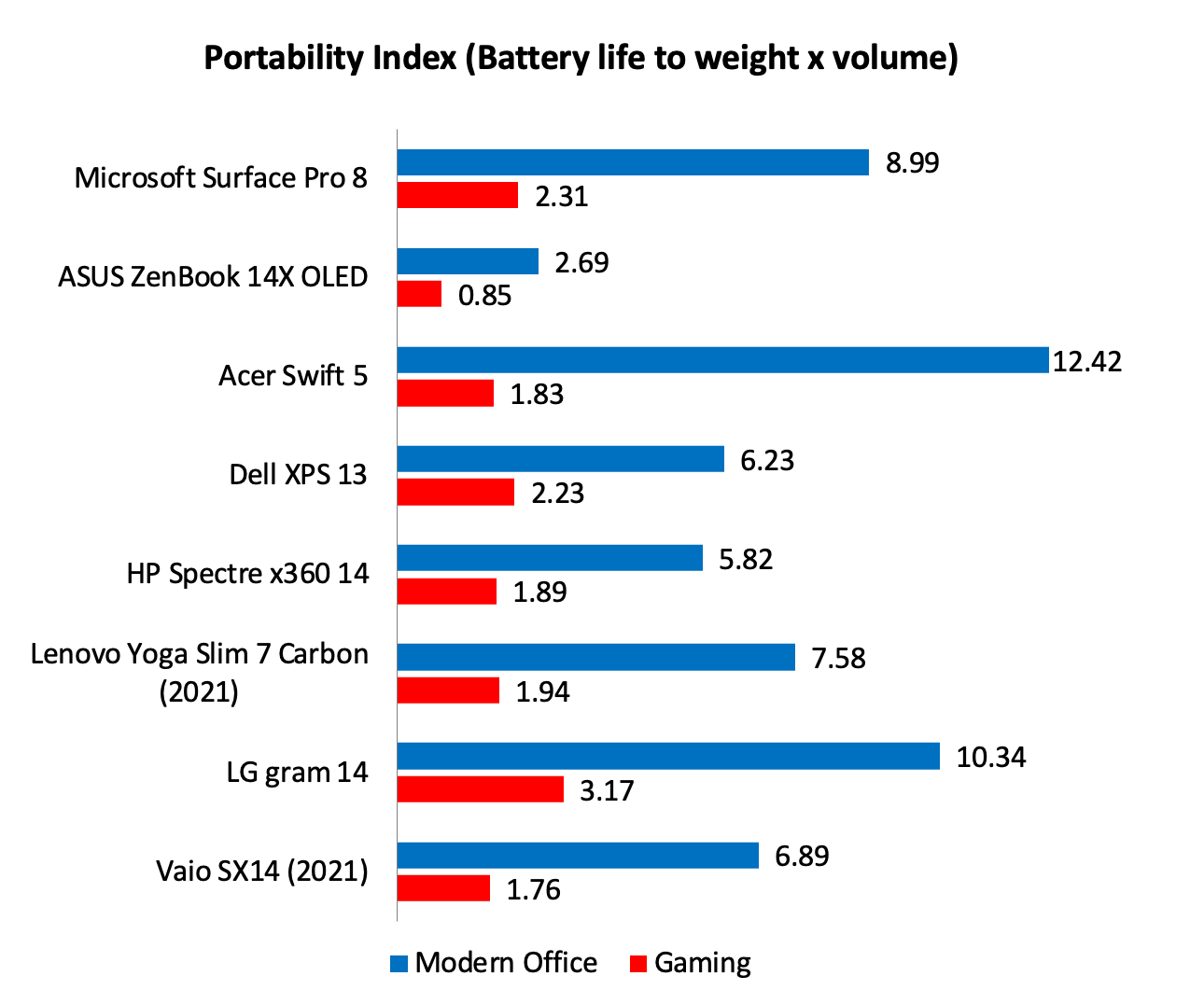 How deep are your pockets? 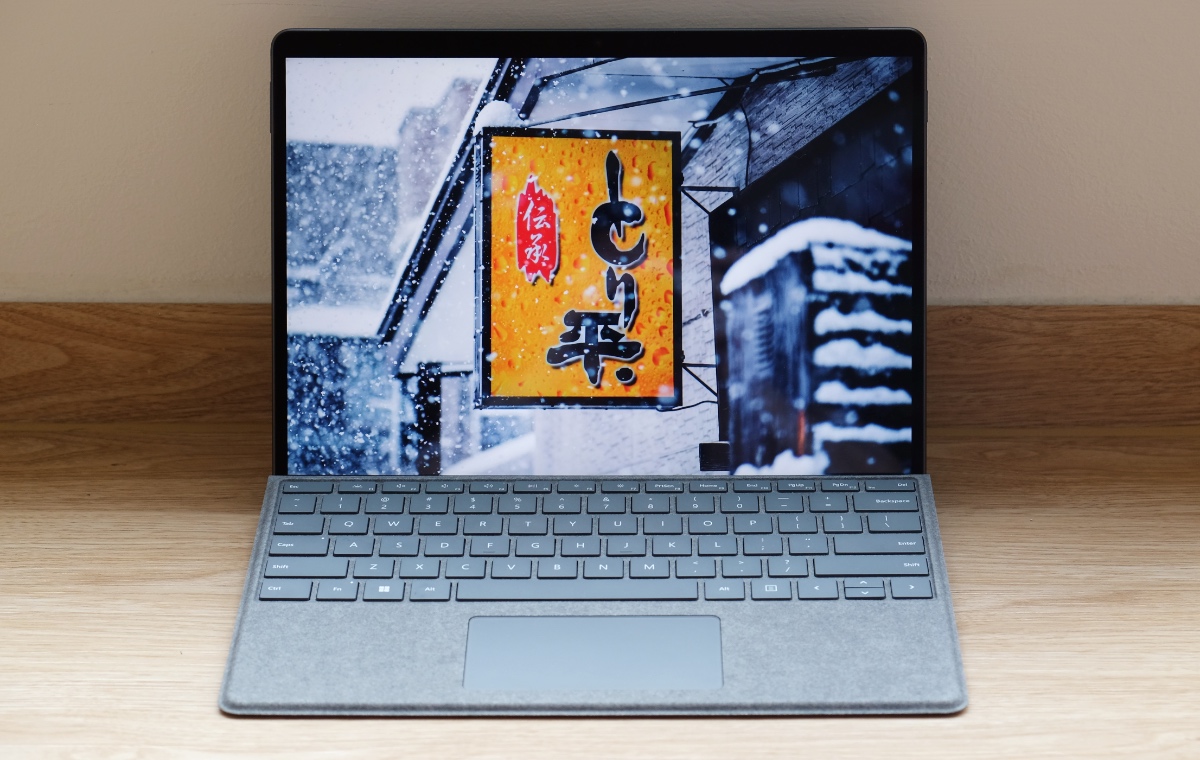 There’s no question that the Surface Pro 8 is the best Surface Pro yet and therefore also the best detachable notebook you can buy today.

The redesign has given it a more modern look; it’s fantastically thin and light; the display, though not OLED, is great; and performance and battery life are both exemplary. The fact that it detaches to become a proper tablet gives it a versatility that is unmatched by its rivals. Sure, there are convertible notebooks but none of them can match the Surface Pro 8 as a tablet.

The only major downside to Surface Pro 8 is the price. Just look at the table above. Furthermore, accessories are sold separately and easily cost a few hundred more. Prices start at S$1,649, but that unit has little memory and storage. The cheapest configuration with 16GB of memory is S$2,099 but that only has 256GB of storage. Though with cloud storage so affordable these days, I think most people can get by with that. If you want a unit with 16GB of memory and 512GB SSD, prepare to cough up S$2,859. If it’s any consolation that configuration comes with the Core i7-1185G7 processor.

As tested, my system with a Core i7 processor, 16GB of memory, and 256GB of storage is S$2,399. However, the keyboard and pen is an additional S$399. This brings the complete system price to S$2,798. No matter how you look at it, the Surface Pro 8 is considerably dearer than its rivals.

All in all, it seems like Microsoft has finally perfected the template for a high-end Windows detachable notebook. And really, price is really the only major thing holding me back from giving the Surface Pro 8 a hearty recommendation. If you are willing to splash the cash, this is one of the best ultraportable Windows devices you can buy.