We’ll be testing the Surface Pro 4 using our usual suite of benchmarks. For comparisons, we will include results from the two most recent Surface devices from Microsoft, 2015’s MacBooks, and the Dell XPS 13.

Here’s a quick look at how the Surface Pro 3 compares against our other tested ultrabooks:

The Surface Pro 4 actually stood its ground quite well in PCMark 8, posting scores that were within the top three for all but one of the benchmark suites, the exception being the Storage test. In the general Home benchmark which assesses performance in applications that a casual user is most likely to engage in, for instance Web browsing, writing, and video conferencing, the Surface Pro 4 turned out to be around 11% faster than the Surface Pro 3.

In fact, it took the lead over its predecessor in all the tests except the Work and Storage benchmarks, where it lost out slightly. It isn’t entirely clear why the newer tablet might fall behind the old one in the Work benchmark, but that could be due to factors like the higher screen resolution on the Surface Pro 4.

And while we might expect the NVMe SSD – after all the NVMe standard was designed for SSDs, right? – on the Surface Pro 4 to come ahead in the Storage test, that wasn’t the case. As it turns out, having an NVMe drive doesn’t automatically translate into faster performance because NVMe drivers behave different from the older SATA/AHCI drivers. New NVMe drives run on an entirely new software stack, and a new driver in Windows – either from the drive manufacturer or from Microsoft – is used instead of the traditional SATA ones.

As a result, the entire process functions differently from the old software stack, and a command called force unit access (FUA) is now implemented in Microsoft’s driver that forces all write operations to be written in both the cache and non-volatile media like your NVMe drive. AHCI didn’t do this, and the new implementation leads to reduced performance, although one benefit is that your data is kept safe in the event of a power outage or system failure. 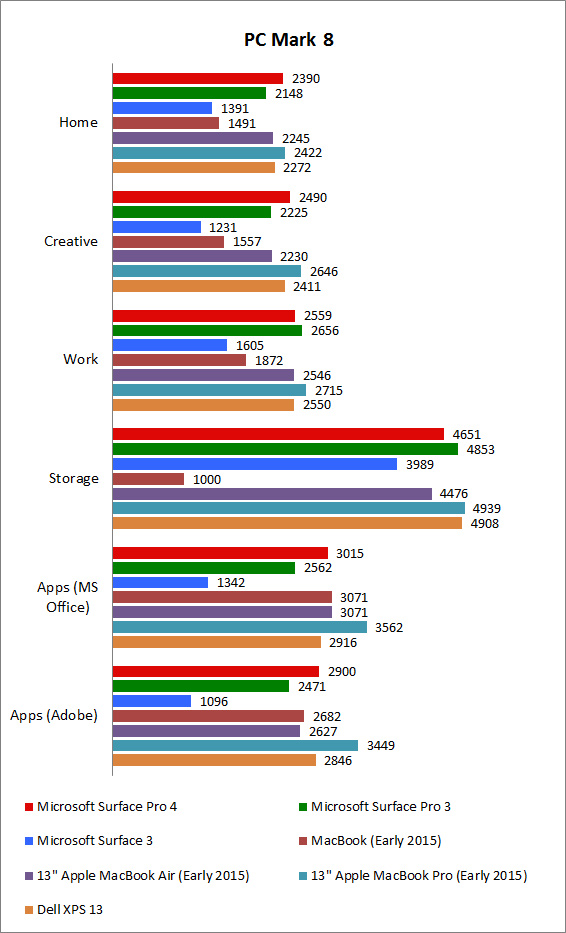 It took an impressive 86% lead over the Surface Pro 3 in 3DMark Fire Strike, and came within striking distance of the 13-inch MacBook Pro. And considering that the Surface Pro 4 is still technically not a full-fledged laptop, that’s fairly impressive.

But don’t let the large improvements in synthetic benchmark scores fool you. As our real-world gaming benchmarks will show, you still aren’t going to be playing many games on Microsoft’s 2-in-1 hybrid, and the markedly improved 3DMark scores say more about the improved integrated graphics capability on Intel’s Skylake processors than the gaming prowess of the Surface Pro 4. 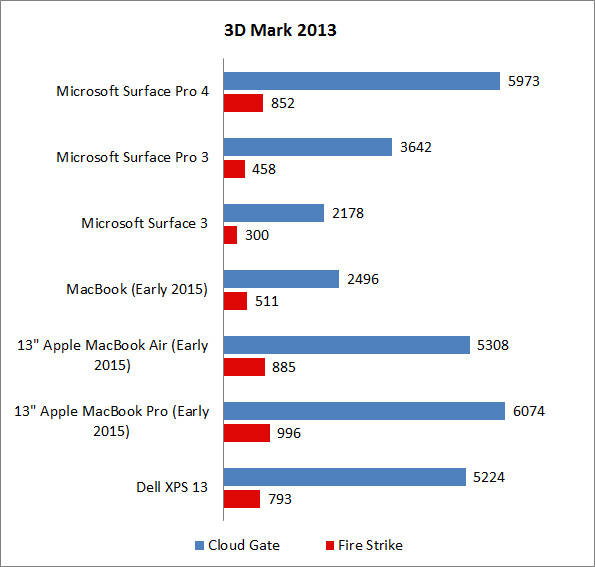 In Far Cry 2, the Surface Pro 4 posted a respectable average of 37.30fps at medium settings and a 1080p resolution. That’s definitely playable, but most games today aren’t as easy to run as Far Cry 2. At high settings, things were still playable at 22.27fps, around a 46% improvement over the Surface Pro 3’s barely playable 15.27fps.

As in 3DMark, the Surface Pro 4 also managed to outstrip the other ultrabooks, losing only to the 13-inch MacBook Pro. 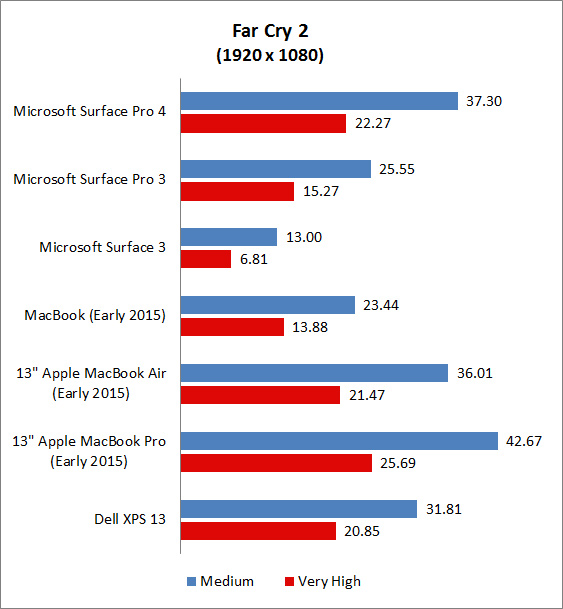 Tomb Raider proved to be more demanding than Far Cry 2, and suffice to say that you won’t be running games of its ilk on the Surface Pro 4. Still, the relative performance rankings we observed in 3DMark 2013 and Far Cry 2 are unchanged, and the Surface Pro 4 managed to beat all the other systems except the MacBook Pro.

Graphics performance may nearly have doubled compared to the Surface Pro 3, but there’s still a long ways to go till we’re running 3D games on ultrabooks and 2-in-1 hybrids. 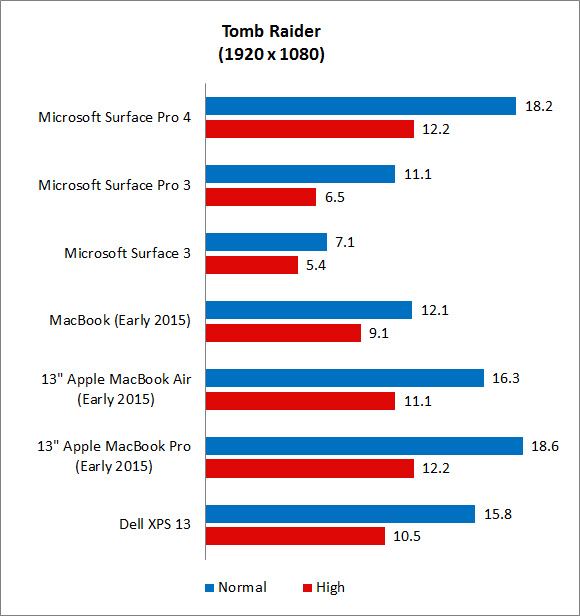 The Surface Pro 4 managed to outlast the Surface Pro 3 by 16 minutes despite its smaller battery (39Wh vs 42Wh), most likely thanks to its more power efficient Intel Skylake processor. We measured the battery life using the battery test in PCMark 8’s Home benchmark suite, so the results you get in daily, real-world use may vary. Of course, the smaller battery of the Surface Pro 4 couldn’t match up to the larger batteries on the other test systems, for instance the 74.9Wh pack on the MacBook Pro.

Our power consumption figures go on to show that the Intel Core i5-6300U is just that much more efficient than the Core i5-4300U on the Surface Pro 3. It’s still not up to the power-sipping Atom processor on the Surface 3 of course, but it does compare fairly favorably with the other ultrabooks. 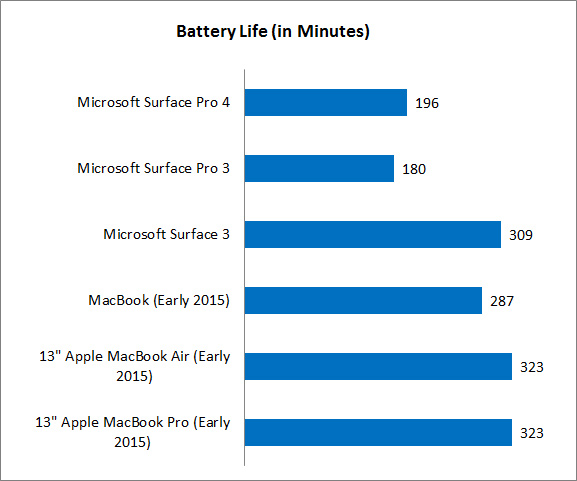 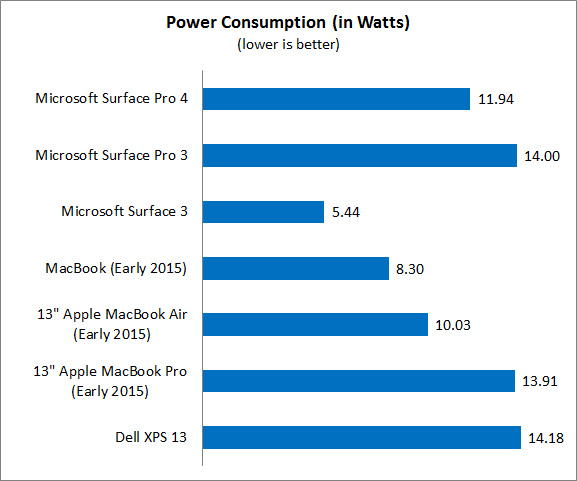 Our portability index takes into account battery life, weight, and volume to provide a measure of how easy a notebook is to carry around relative to other compared systems. The higher the figure, the better, and the Surface Pro 4 came ahead of the Surface Pro 3 (both with Type Cover keyboard installed), which is unsurprising given its stronger performance in our battery tests and thinner profile. 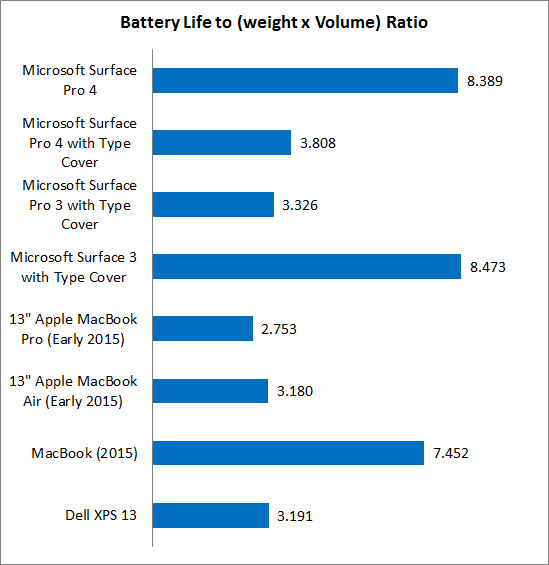