The Surface Laptop Go is powered by Intel’s 10th generation Ice Lake Core i5-1035G1 processor - which is pretty much an entry-level quad-core part. The review unit we had is comfortably specced with 8GB of DDR4 RAM, and 256GB SSD storage - the highest consumer configuration that costs S$1,388 for the Surface Laptop Go, but the results will also pretty much be identical to the S$1,088 variant that has half the SSD storage.

Noting that Microsoft has positioned the Laptop Go as an low-cost ultraportable laptop, we struggled to find another recently released device that we have reviewed that is of similar dimensions, weight and even configuration. It's rare that we get low-end Core i5 specced system to test. As such, we've put together the next best set of comparisons - full fledged ultraportable notebooks that we've tested, some of which are priced as low as just S$1.4k such as the AMD-powered ASUS Zenbook 14 UM433 and another 10th-gen Ice Lake powered ASUS Zenbook 14 UX425, albeit these are higher specced Core i7 variants. Also note that these comparison devices are larger 14-inch brothers while the Laptop Go sports a more compact 12.45-inch screen.

Given that we are dealing with ultraportables, I have decided to throw in my own 2-year-old Macbook 12-inch, for Cinebench and WebXPRT benchmarks. Check out our full set of results obtained:- 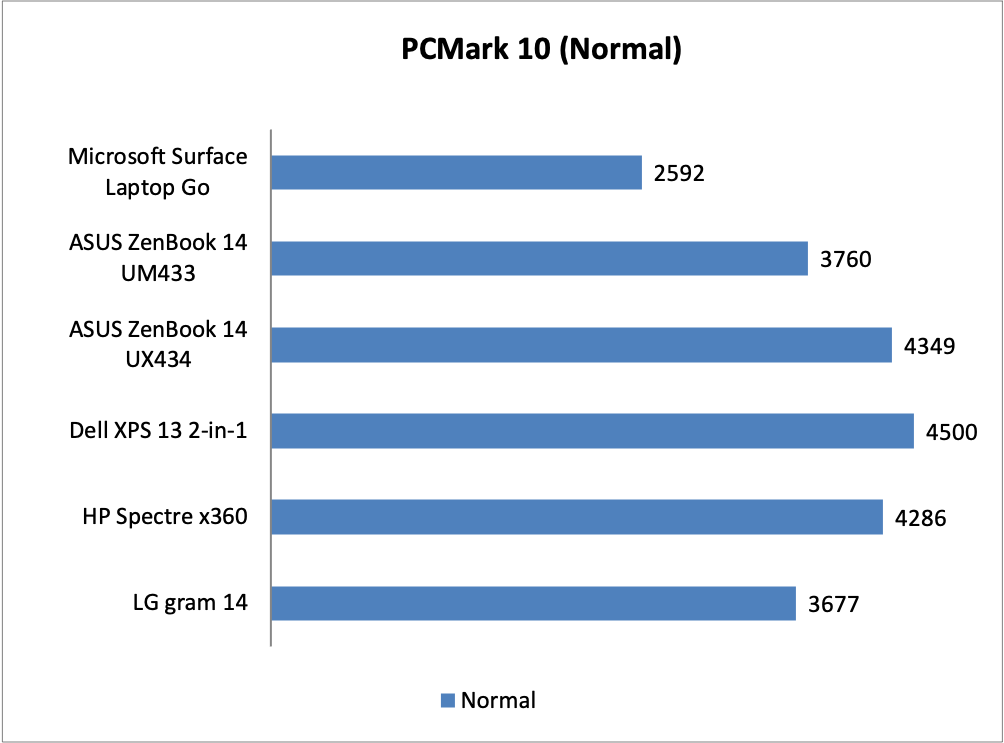 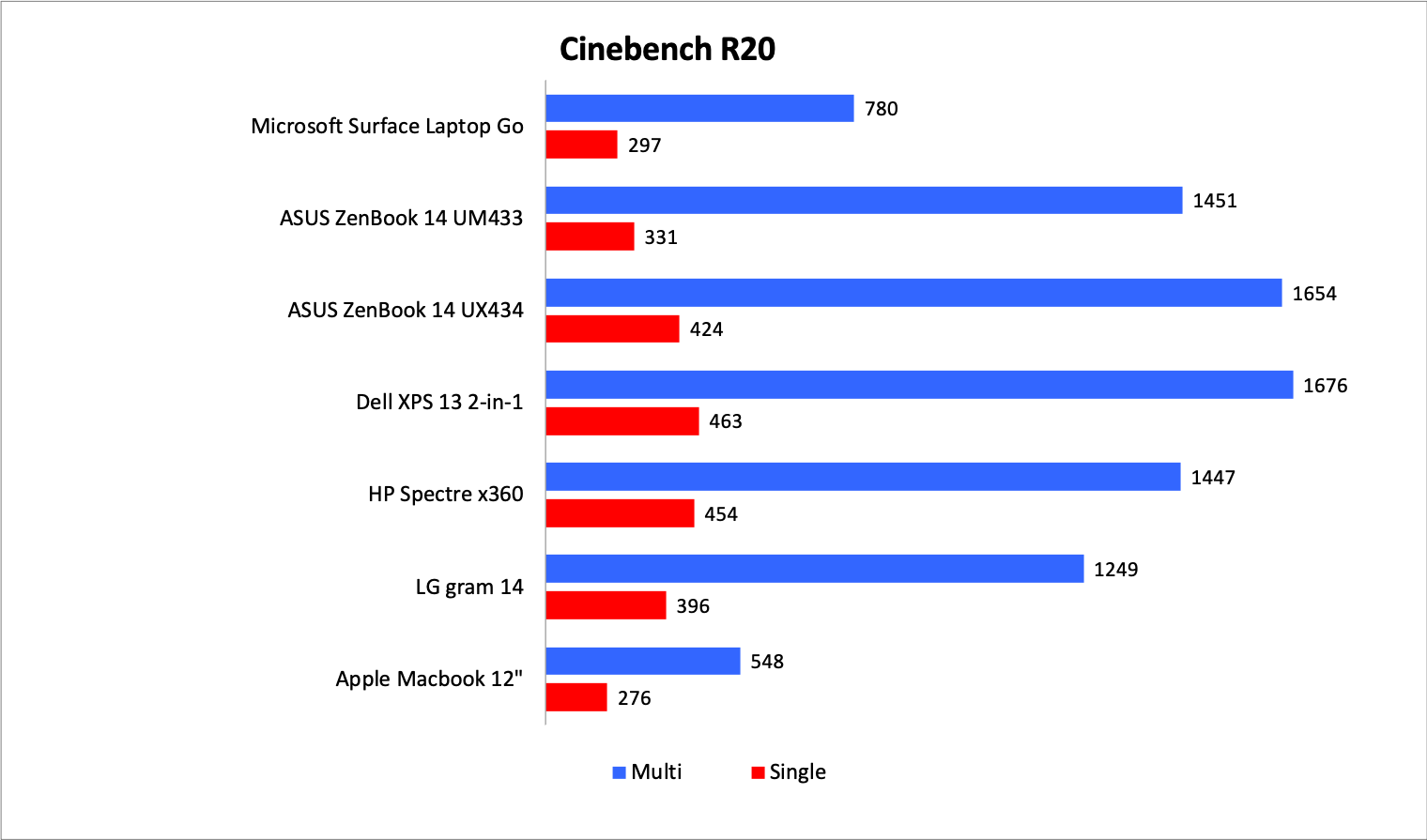 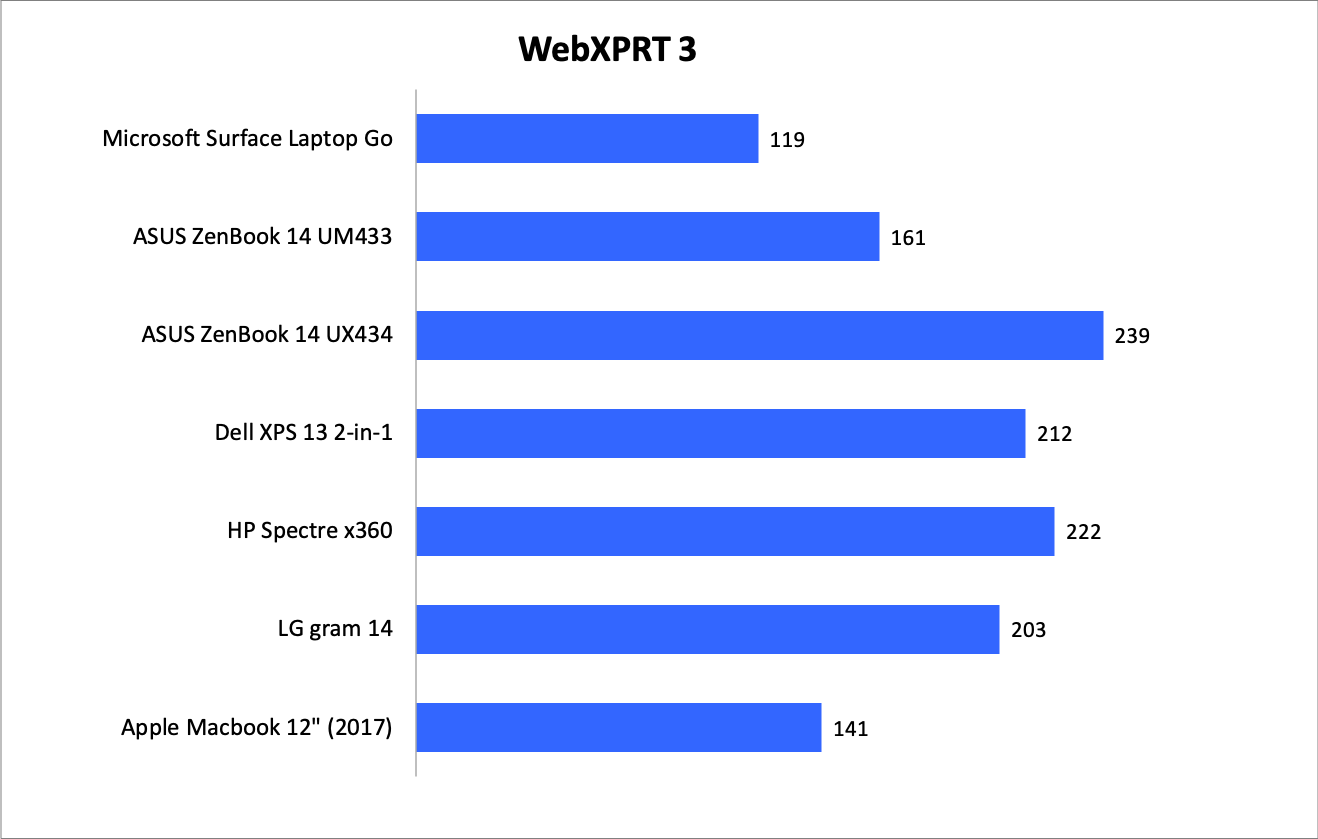 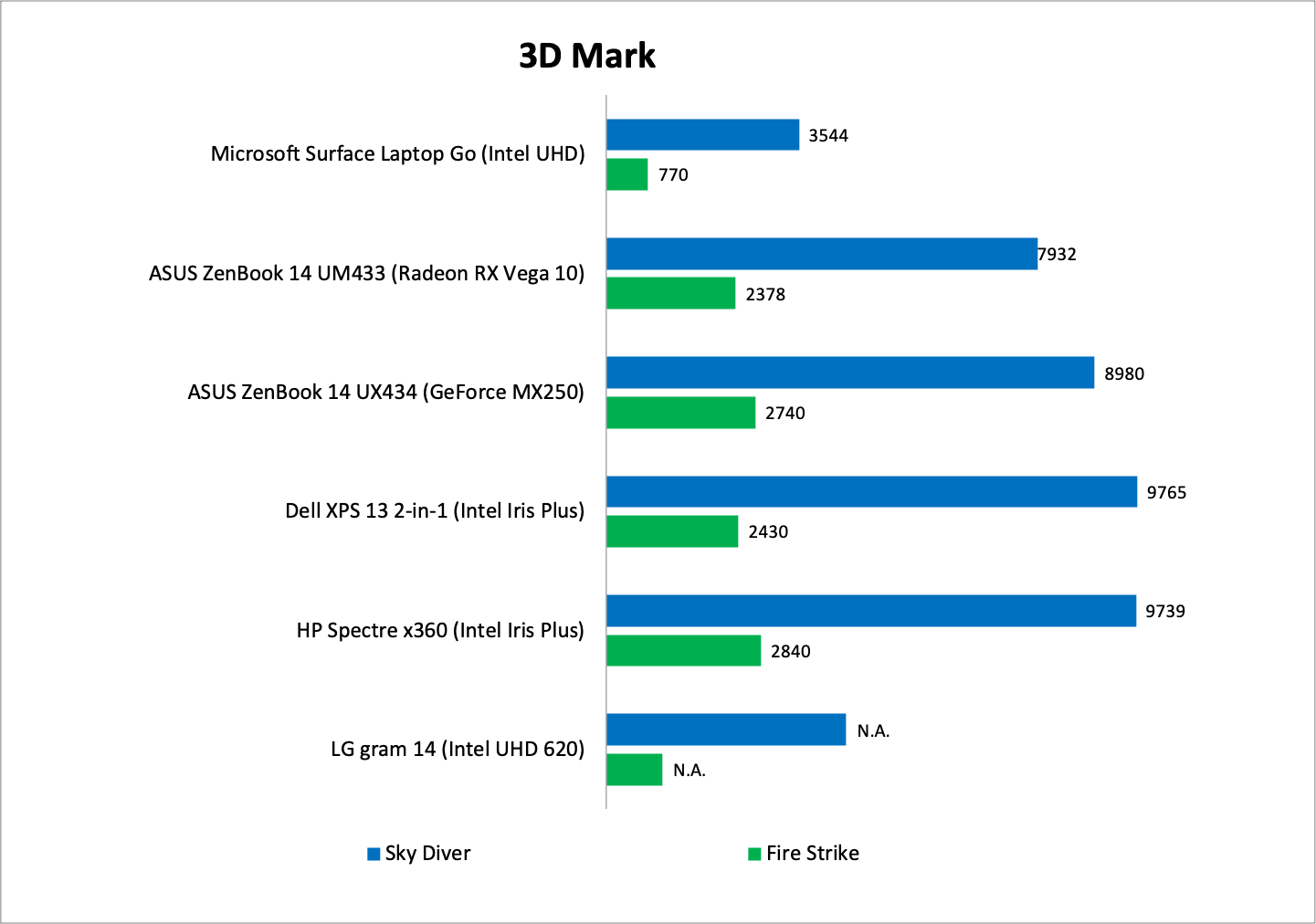 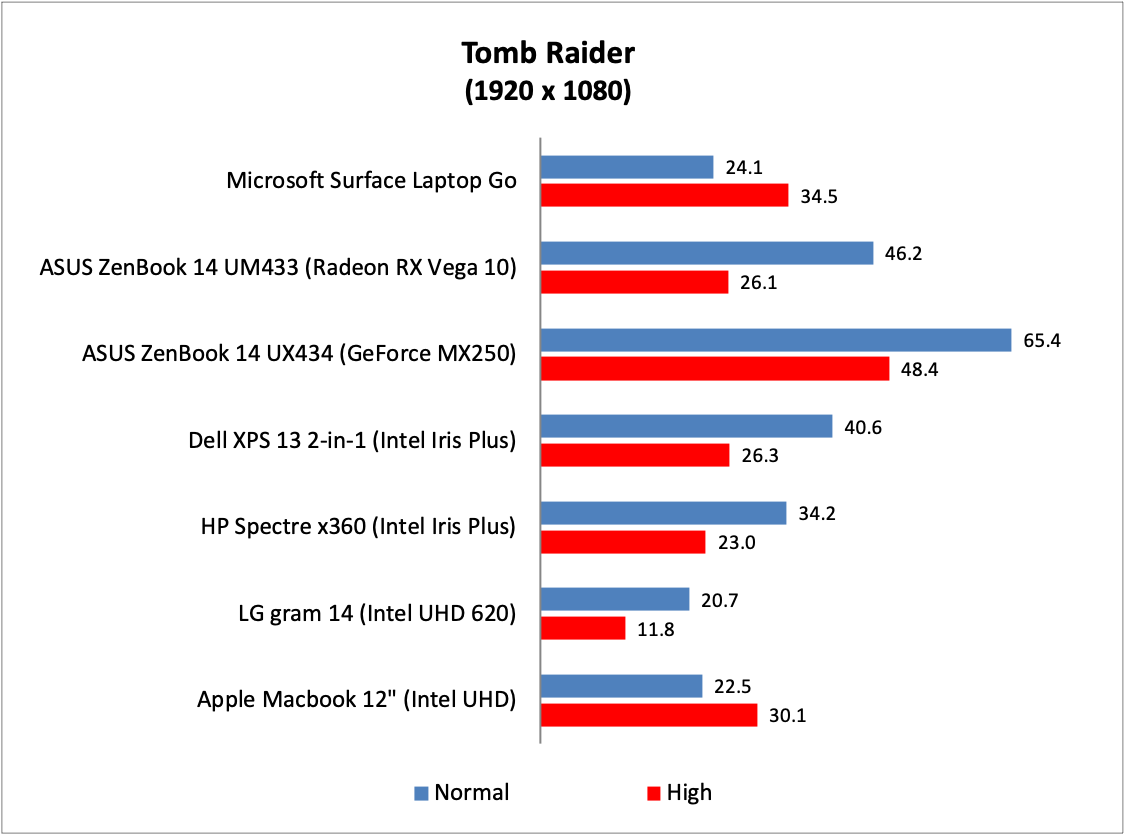 While the results don't look great for the Surface Laptop Go, its limitation is squarely down to the processing subsystem it's endowed with and any other notebook specced similarly would likely cough up similar results if you are aware of the pecking order of the processors used.

That said, we do have a price-compatible fight when considering that the larger and more polished ASUS Zenbook 14 UM433 ultraportable puts out nearly double the performance results of the Surface Laptop Go. Clearly, the Microsoft Laptop Go is not meant for medium-heavy use, but as we will find out later, it's still sufficiently equipped to tackle many day-to-day tasks, and even some software development.

The question you would have to ask yourself is if you need a more compact laptop and if you're okay to dish out an equivalent amount of cash as the larger and more capable counterpart.

Note: Battery tests were conducted using PCMark 10's battery benchmark with display set to 100% brightness. For more details on how this benchmark works and why it was chosen, we have a standalone article. 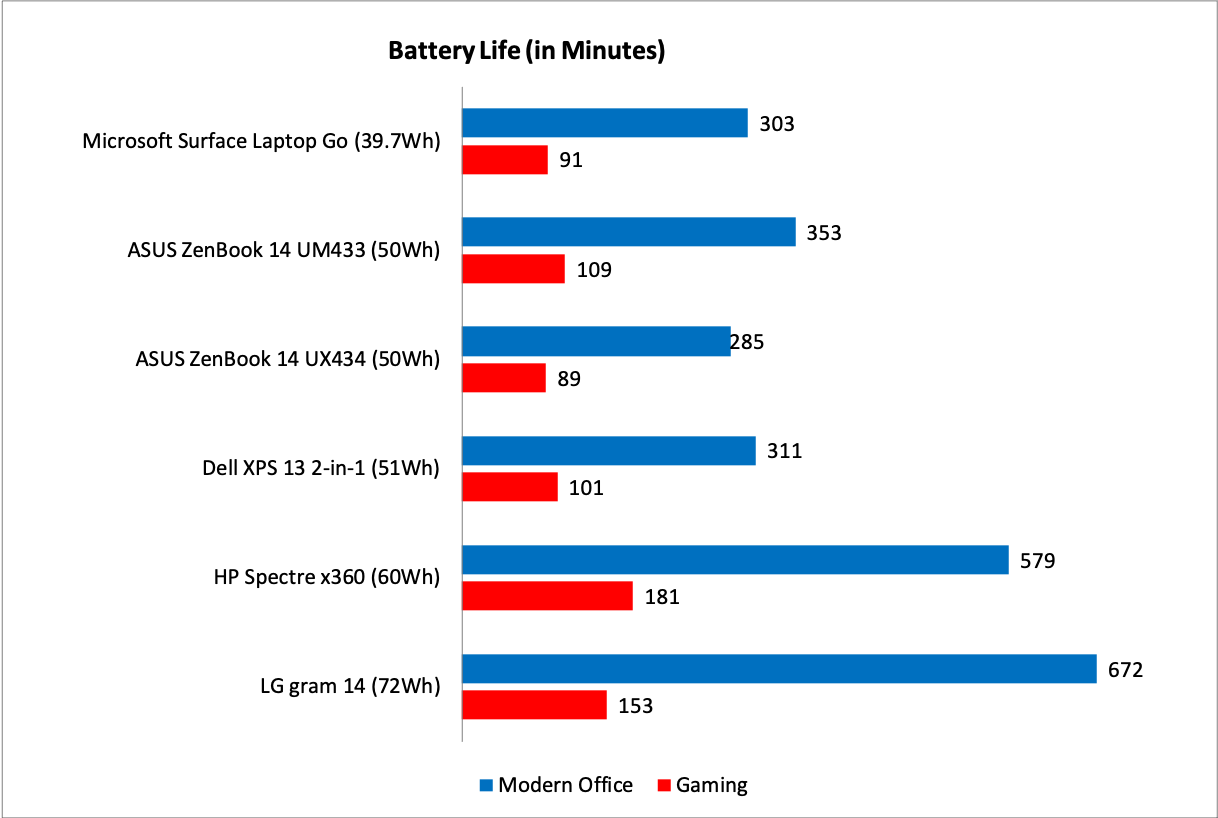 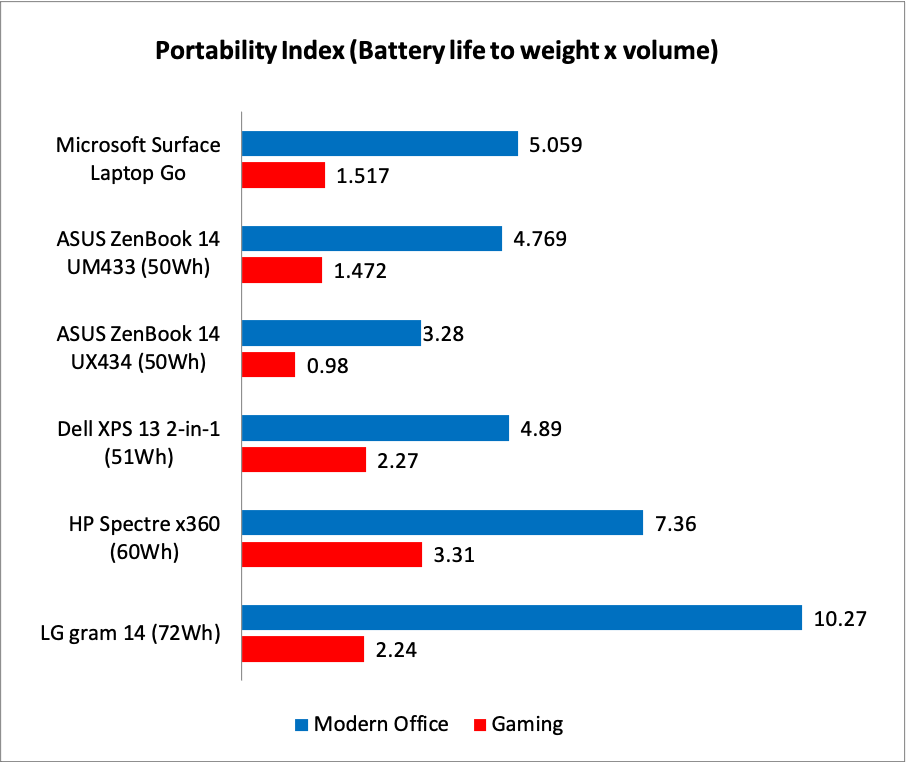 Microsoft claims that its 39.7Wh battery can support up to 13 hours of typical usage, though it is footnoted that this 13-hour claim is derived using a mixture of active use and standby. In HardwareZone, we have chosen to use PCMark 10’s battery benchmark as our test case to mimick certain aspects of real-work usage. Our battery test outcome reflected a modest battery life of just over five hours under the Modern Office battery workload, and 1 hour 31 minutes in the Gaming workload. This is still reasonable, considering that the power consumption is one of the lowest amongst all the other devices benchmarked against, which also helped it rank well in our Portability Ratio index when factoring the device weight, size, volume against battery uptime.

What about matters pertaining to charging? Microsoft claims that recharging the battery from 0 to 80% takes about an hour. To test that claim, we tried charging using different methods:-

During our initial tests, we also found out that if you are using the 40W Surface Connect charger or a higher-powered USB-C PD charger, it is important to leave the machine on, in order to hit the maximum charging rate. It is noted that even if a higher wattage USB-C PD charger is used, the maximum power drawn will always be limited to 20W. Only by using the Surface Connect charger, will you be able to hit a power draw of 27W on average. Unfortunately, none of these above connection methods was able to really charge from 0 to 80% in an hour; even the Surface Connect route took about 1.5 hours before reaching the 80% charge mark.

For laptops, I value portability immensely. To drive home this point, my on-the-go laptop is the 920g Apple Macbook 12, and I use it for mainly software development, and of course word processing. As such, to determine if Surface Laptop Go can truly be called an ultraportable, I subjected the Laptop Go to a few of my real-world tests.

For convenience, I use a Pacsafe Crossbody as my tech bag, in which Surface Laptop Go fits comfortably, without inducing a backache whenever I carry the bag. For comparison sake, an Apple Macbook Pro 13-inch almost can't fit into this crossbody, and is a huge deadweight. As such, the Surface Laptop Go passes the bag test handily, underscoring the compact and portable nature of the device, even if it can't perform on a par with regular-sized notebook at the same price. Yet, it's not as helpless as a Surface Go product and it has just enough chops to pull through basic productivity and creativity tasks with ease.

In lieu of a cafe outing during my time with the laptop, I conducted the 'cafe test' in temporary co-working spaces provided by hotels, whereby the scenario is similar to a cafe in that it's difficult to find a power socket. Two types of tasks were undertaken - one to write this review using Microsoft Word, then Google Docs, and to do some simple software development (Python, NodeJS, React) on the Surface Laptop Go, using Visual Studio Code as a code editor. Both Docker and consequently Windows Subsystem for Linux (WSL) were turned on throughout.

I managed to work through my review for about 2 hours before the battery dipped from 100% to  77%, and for software development, it depleted to about 61%. Not too bad.

One rather bad experience I had with ultra-low-power chips is that the system simply cannot cope with Android app development, nor can they deal with the demands of Docker. Amazingly, even though Surface Laptop Go is powered by an Intel 10th-gen Core Ice Lake processor with quad cores, a chip geared towards low-power usage, I found development to be mostly snappy, though there may be slowdowns when developing for Android initially.

Photoshop and Lightroom apps work fine on the Surface Laptop Go - for the spec I was loaned. I don't think I can say the same for the base model that's endowed with only 4GB of RAM and uses eMMC storage.

It must be noted that the Surface Laptop Go's cooling system incorporates a fan, which is why it can probably sustain peak loads better than fanless counterparts. 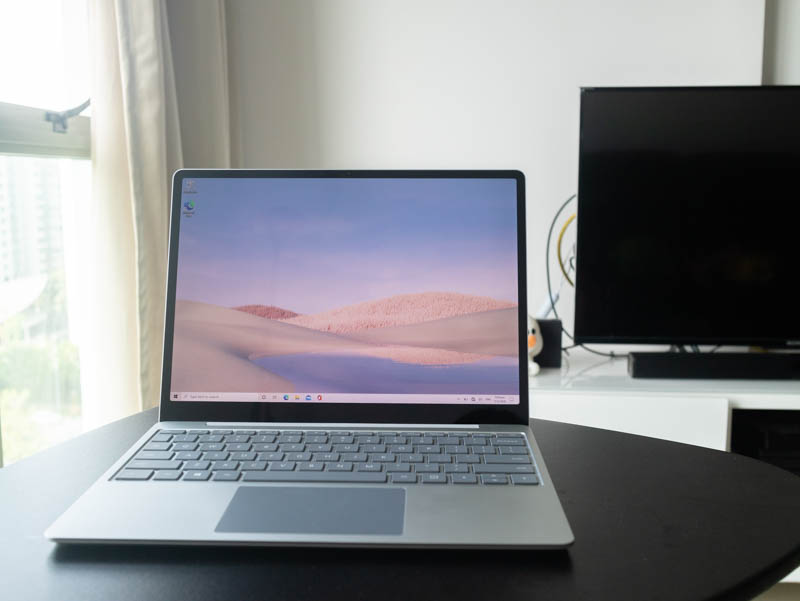 The Surface Laptop Go finally satisfies customers that find it hard to pay a premium price for the regular Surface Laptop, while also satisfying their need for a more powerful machine as compared to a very low-powered (and much smaller screen) Surface Go. Even though the screen may not be Full HD equivalent, it's still decent to use and we didn't find it a drawback, plus at the same time, it offers much better portability than other full-fledged Surface devices (apart from Go). To recap, here are the configurations and prices for Surface Laptop Go, noting that all of them come with Intel Ice Lake Core i5-1035G1 processor:-

Whilst the price point for the entry-level option may seem tempting, we advise readers to reconsider, as eMMC storage is slow, and 8GB RAM is the absolute minimum baseline for modern machines to enjoy decent productivity without slowdowns. This means the most optimal SKU would be the 8GB/128GB variant at S$1088.  128GB storage is usable if you don't plan to stuff the machine with too many applications or large work files, and you plan to use cloud storage or external storage options to augment the system. However, if that's not something you can easily live by, you might want to pony up for the 8GB/256GB variant for much more ample storage and that will cost you $1,388.

While you can make a case that $1,388 can get you a far more powerful laptop plainly by raw specs, such as the ASUS Zenbook UM433, it must be noted it comes with trade-offs in portability, lack of touchscreen functionality, and lack of USB-C PD charging capability. However, and interestingly, the competition for the Surface Laptop Go isn't from other brands, but it's within Microsoft's own Surface Laptop 3 13.5-inch option that starts from S$1,488 (though that's with 128GB storage), comes with a touchscreen and has a speedier Core i5 processor. There's also the Surface Pro 7, which's more similarly sized to the Surface Laptop Go, has a faster Core i5 processor and obviously, it is touchscreen-enabled for S$1,388 (but without the keyboard).

So all said and done, the advantages of the Surface Laptop Go is that it's more compact and is much more affordable than other options. As long you don't really require the extra performance potential and you really just need a simple, no-nonsense traditional laptop (with a touchscreen as a bonus) that can get by with everyday Microsoft applications or cloud applications, and you value portability particularly, the S$1,088 Surface Laptop Go is an easy recommendation. Students can also get 5% off the recommended retail price when making the purchase at the Microsoft Store.

Write a Review
Compare This | Specifications
Lightweight and portable
Fingerprint biometrics-based power button single sign-on
Touchscreen display for its price
Overall performance and value
No Surface pen support
Screen resolution is a little low
No face recognition for Windows Hello login
Our articles may contain affiliate links. If you buy through these links, we may earn a small commission.