To evaluate the performance of the Surface Laptop 3, I'll be comparing it against other ultrabooks like the recently reviewed ASUS ZenBook 14 UX434, the Acer Swift 5, and the Dell XPS 13 2-in-1. It is the only 15-inch notebook here, but it still utilises the same class of hardware as its smaller competitors.

Here's a look at how the Surface Laptop 3 stacks up against other ultrabooks:

The Surface Laptop 3 falls slightly behind the other Intel notebooks in PCMark 10, and it would seem like the Ryzen 5 3580U chip can't quite keep up with the Intel Core i7-1065G7. The Ryzen processor is a 4-core/8-thread CPU with a base clock of 2.10GHz and boost clock of 3.70GHz. On the other hand, the Intel chip is clocked lower at 1.30GHz but boosts higher to 3.90GHz.

Granted, this isn't an entirely fair comparison since AMD has since announced its new Ryzen 4000 APUs, so the Ice Lake processor should really be compared against those. However, it still raises the question as to why Microsoft didn't just wait for the newer APU to release a Ryzen version of the Surface Laptop 3, although it could still update it further down the road.

Graphics performance is a bright spot for the Ryzen chip though, and the Surface Laptop 3 was faster than the Surface Pro by roughly 12 per cent in 3DMark Cloud Gate. 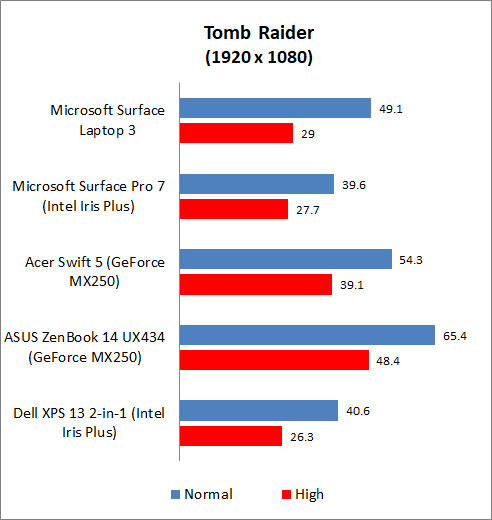 The Ryzen 5 3580U processor is proving to be a pretty efficient chip, although it would really have been nice to see Microsoft take advantage of the extra space and cram in a larger battery befitting a 15-inch laptop. Should this be your next laptop? The Surface Laptop 3 marks the first time that Microsoft has introduced a 15-inch version of its clamshell notebook. However, while the larger screen would seem to be targeted at more demanding users who require more screen real estate, more power, and even longer battery life, the 15-inch Surface Laptop 3 doesn't seem to do a lot to address that.

The Ryzen edition of the Surface Laptop 3 has what appears to be a less capable CPU, at least compared to the Intel Ice Lake chip, and the battery size is also unchanged when coming from the 13.5-inch model. It's puzzling, to say the least, and storage also caps out at 512GB (I tested the 256GB model). Furthermore, you'll only be able to get the 256GB version locally, and only the Ryzen model is available.

The Ryzen laptop isn't terrible by any means, boasting absolutely stellar build quality, a sleek and elegant design, and a great display. But there's just not much of a hook here to pull you in, and I'm not sure why you would opt for the Ryzen configuration over the Intel one. In fact, the Intel version even has better wireless capabilities with support for Wi-Fi 6.

Overall, this is a decent 15-inch laptop if you really need a bigger screen and are a fan of Surface hardware, but I would otherwise look for a laptop that has Thunderbolt 3 support and more USB ports, or even simply the smaller 13.5-inch Surface Laptop 3 with the Intel chip. And if we are talking about smaller 13- and 14-inch notebooks, then it's impossible not to consider also ASUS' ZenBook 14 UX434 and Acer's Swift 5. These notebooks have 10th generation Intel processors, discrete graphics from NVIDIA, and what's more, costs around the same or even less.

In closing, S$2,488 seems like a steep price to pay for the Surface Laptop 3's bigger screen and a previous-generation CPU that wasn't even top-of-the-line when it was released.