We have on hand the higher specced Surface 3 and we'll be putting it through our usual suite of synthetic and real-world gaming benchmarks. For comparison, we’ll of course be including the Surface Pro 3 and other highly-portable 2-in-1 hybrids like the ASUS Transformer Book T300 Chi and Lenovo Yoga 3 Pro. The full list of benchmarks used is as follows:-

Before diving into the results, we’ve compiled tables to show how the Surface 3 stacks up against the competition.

As expected, the Surface 3 doesn’t fare at all well in PCMark 8, clearly lagging behind the other ultrabooks and 2-in-1 hybrids in most of the benchmarks. This is no doubt due to the weaker capabilities of the Intel Atom x7-Z8700, which fails to stand up to the other Core M- and Core i-series processors. Its 4GB of RAM also penalizes it against the others, which - other than the 13-inch MacBook Air - are all fitted with 8GB.

It managed to narrow the difference in the storage tests, although it still fell behind the pack due to its eMMC flash memory, which failed to stand up against the full-fledged SSD solutions used in the other devices. Results were similar in 3DMark 2013, where the Surface 3 scored the lowest among all the devices. This isn’t something that we can hold against it though because the onboard graphics on the Intel Atom x7-Z8700 is something of a lightweight compared to the other devices in the comparison line-up. It is a good 40% slower than the Surface Pro 3, which wasn’t much of a heavy hitter in the graphics department anyway. Clearly, you won’t be running any games on the new Surface 3, but why would you even want to anyway? The 13-inch MacBook Air (Intel HD Graphics 6000) and Dell XPS 13 (Intel HD Graphics 5500) were the only ultrabooks to eek out somewhat playable frame rates (>30fps) in Far Cry 2 at Medium settings. The Surface 3 is once again heavily penalized because of its Intel Atom processor, posting a hardly-playable 6.81fps on High settings. It was on average about 40% slower than the Intel Core M-equipped ultrabooks like this year’s MacBook and the ASUS Transformer Book T300 Chi. 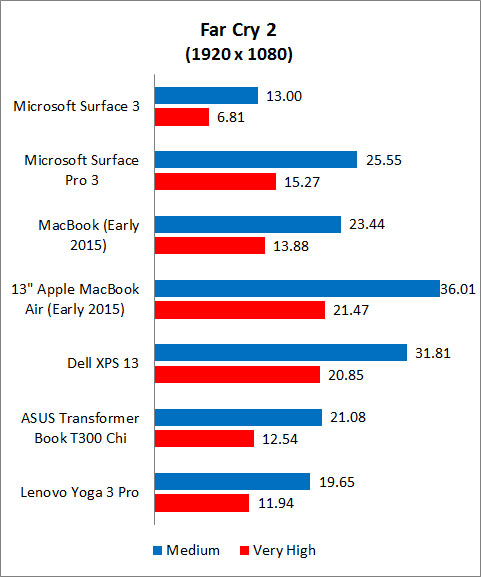 All our compared devices fared quite poorly across the board in Tomb Raider, regardless of whether they were equipped with Intel Core i, Core M or Atom processors. It might seem difficult to derive any significant insights with all the devices performing so poorly, but this benchmark still serves as a useful gauge of the Surface 3’s performance relative to other devices. At 7.1fps and 5.4fps for Normal and High settings respectively, it’s safe to say that Lara Croft won’t be going anywhere. The Surface 3 also once again fell behind the Surface Pro 3 - it was almost 36% slower. Battery life is where the Surface 3’s power-sipping Atom processor really helps it to shine. It had the second-best performing battery, behind only the 13-inch MacBook Air. But when you consider that the latter notebook has a fairly large 54Wh battery, the performance we saw on the Surface 3's 28Wh power pack appears all the more impressive. It lasted a good 5 hours and 9 minutes through our battery tests, which included video editing, gaming and productivity tasks. This put it ahead of the Intel Core M-equipped MacBook, ASUS Transformer Book T300 Chi and the Lenovo Yoga Pro 3. It also lasted a whole 2 hours (and then some) longer than the Surface Pro 3, which should mean that you’ll be able to get a whole lot of more work out of it when away from a charger. Our Portability Index translates factors like battery life, weight and volume into a ratio to help you better judge which device is more convenient to port around. Here, the Surface 3 absolutely runs away with the crown with a ratio of 19.061. With the added bulk of the Type Cover keyboard, this falls to 8.473, which is still ahead of the pack - the 2015 MacBook has a ratio of 7.452. The Surface 3's slim dimensions and excellent battery life combine for a winning combination here.