Detective Yagami is on the case! 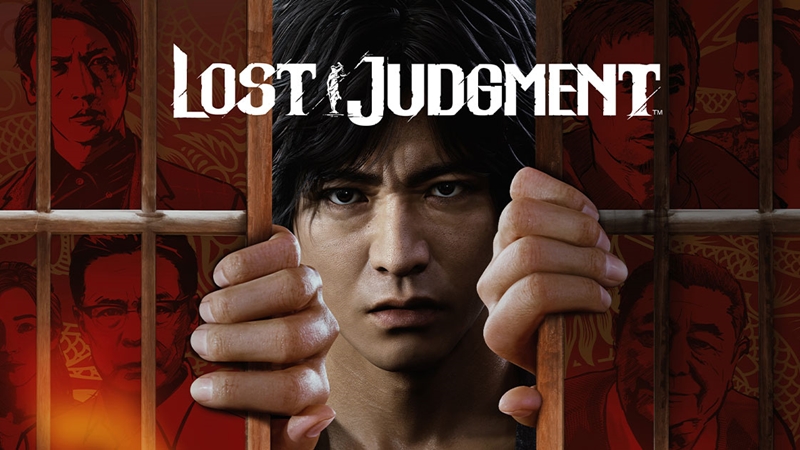 If there's anything I've learned from playing Lost Judgment over the past few days, it's that defense attorney-turned-private detective Takayuki Yagami is a supremely talented guy. I mean, the man isn't just an ace at sleuthing, he's also proficient at martial arts, skateboarding, and even dancing, not to mention he's able to do all of that while maintaining that edgy, smouldering gaze of his.

Well, bless the man and his absurdly diverse skillset then, because you'll need all of it and then some to get the most out of Rya Ga Gotoku Studio's latest title. In this sequel to 2018's acclaimed Yakuza spin-off Judgment, Yagami and Co. once again find themselves embroiled in a web of mysteries that appears disconnected at first, but as the threads begin to intertwine, it quickly becomes apparent that they all lead back to a single point of origin, and it's up to the eagle-eyed detective to uncover the truth.

On paper, Lost Judgment might be listed as an action-adventure JRPG title, but I'm here to tell you that such a description only applies to the core gameplay and not the myriad of quirky mini games and side quests you can undertake. Now, I will admit such a statement sounds pretty commonsensical, but I've certainly got my reasons - one of them being that the spread of content you can tackle on the side is so ridiculously diverse that it actually deserves its own section. However, we'll get into that a little later, because Lost Judgment's narrative is getting first dibs on the spotlight.

One hell of a detective story 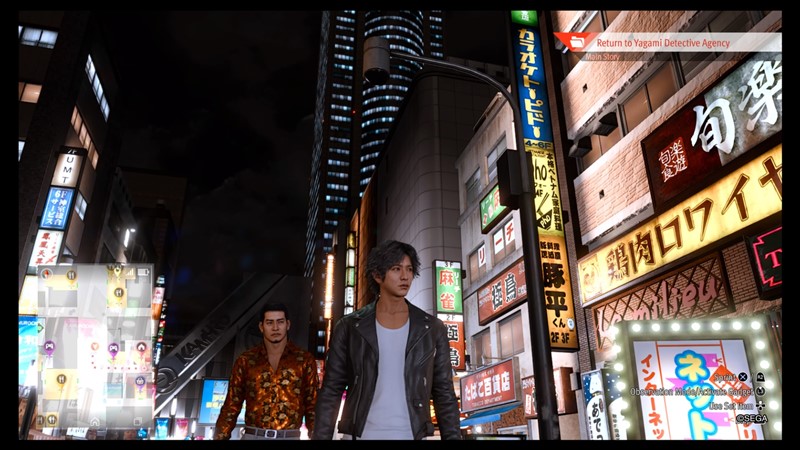 At face value, Lost Judgment's narrative doesn't seem very astounding or extraordinarily innovative in terms of circumstance, but then again, no good detective story plays with an open hand. I wasn't exactly impressed with the seemingly-slow pacing at first, but moving into the second hour, I soon found myself easing into the third, then the fourth as the mystery deepened and I started to see, or to be more accurate, I wanted to see how each discrete thread led back to a larger conspiracy. There's a certain beauty in how the developers have guided the flow of the narrative, and it's quite like a good TV sitcom - once you get baited by that first twist and jump in, they've already got you hook, line and sinker.

In essence, unlike other RPGs which love setting the tone early and then send you on your merry way to defeat the boss, Lost Judgment really takes its time to let the suspense and flavour of each segment set in. As for why it has opted to stretch out its own narrative like that, that's because the game is giving players time to explore what they really think about each character as well as the various social issues that it raises, chief among them being bullying. 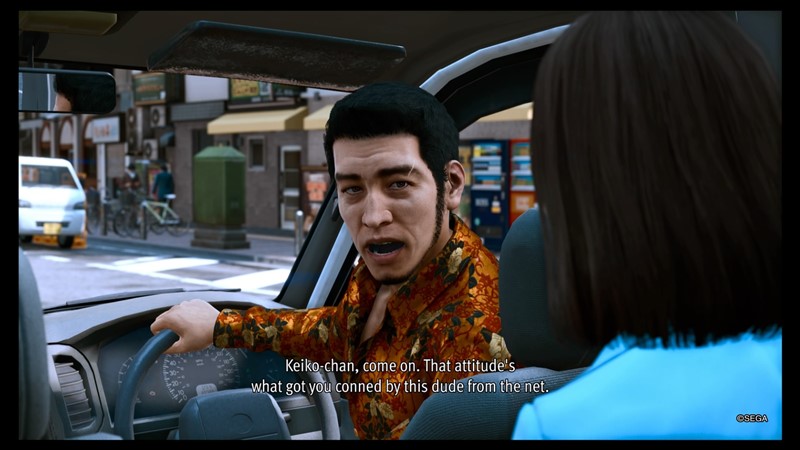 Although you might laugh at the notion of handling something so...trivial, the way the game and the characters are crafted, not to mention the excellent presentation in general will soon have you wanting to give some characters a hug, and to sock others in the face (trust me on this). In that sense, you could say that Lost Judgment offers players "immersion" in a different manner than most of us are accustomed to, because many of these social issues are actually very real, and seeing how they've managed to weave them into the game's own plot without compromising on the mystery aspect is really worth tipping your hat to.

Of course, it's not all doom and gloom - there's also lots of witty banter to be had between Yagami and crew in between all of that, like when Tsukumo goes full fanboy and practically begs his fellow detective to pick up a limited-edition figure for him. So, there are times you will laugh, and times you want to cry - emotion is a huge part of the narrative experience here, and the developers have managed to pull it off exceptionally well, making for a meaningful, memorable story that you'll think about long after you finish your playthrough. 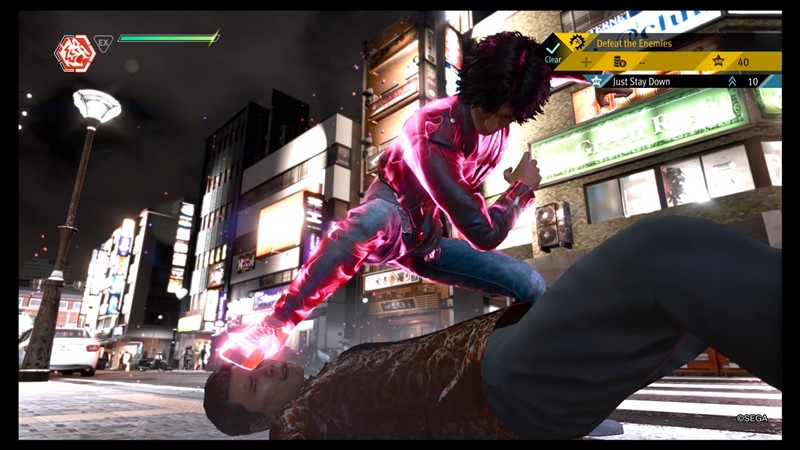 Apart from the enrapturing narrative, Lost Judgment's gameplay is the other gobsmackingly awesome thing about it, especially the fights. Don't get me wrong, though. I have a healthy amount of respect for the game's other segments, like stealth, platforming and tailing sequences, but I just happen to be a nut for good martial arts displays, if you want to call it that.

i mean, this is the same country that can make four guys drinking iced tea look badass as heck (you know if you know), so I'm not surprised to see they can do the same for Yagami's fight scenes. Generally speaking, regardless of whether he's in Crane, Tiger or Snake style, Yagami's fighting skills (and more importantly, the animations) are absolutely on point. It feels very fluid and practical, and the coloured flames on his hands and feet really adds points to the badassery - it makes him feel like a Super Saiyan at times. In fact, as you complete missions and acquire more SP for skills, Yagami becomes even more of a one-man army than he already is. Take it from me; when you do manage to chain a bunch of skills together and top it off with an EX attack, like chucking a chair at an opponent, saying it feels "good" would be a serious understatement. 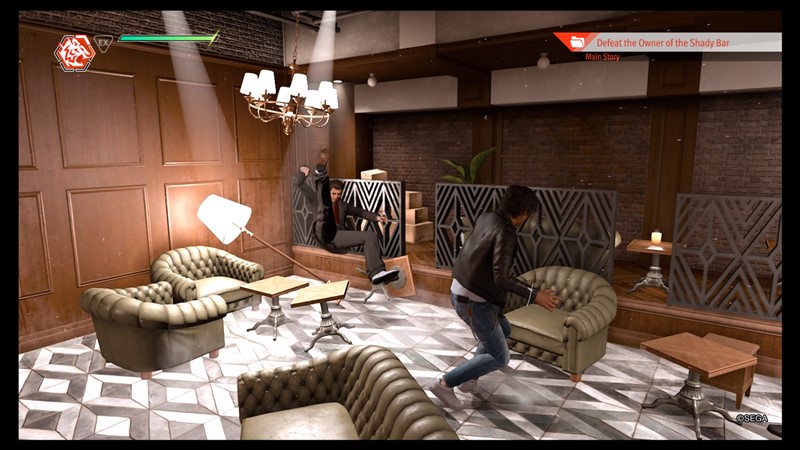 However, what I'm more impressed by is actually the fact that combat isn't as hard to master as you might think, even if we factor in the three martial arts styles. Unlike games such as the original Witcher where you had to switch stances depending on the type of enemy, Lost Judgment's combat styles are separated by "circumstance" rather than by the opponent, which makes it easier for players, especially JRPG newbies to keep track of when to use Crane, Tiger or Snake. For example, if you're fighting a bunch of enemies at once, go for Crane, and if they're armed, perhaps you might want to default to Snake. By keeping things simple where they should be simple, the game lets players focus their attention on other aspects like timing and button inputs, and the sooner players can register these to muscle memory, the sooner they'll be able to appreciate all that this aspect of the game has to offer. 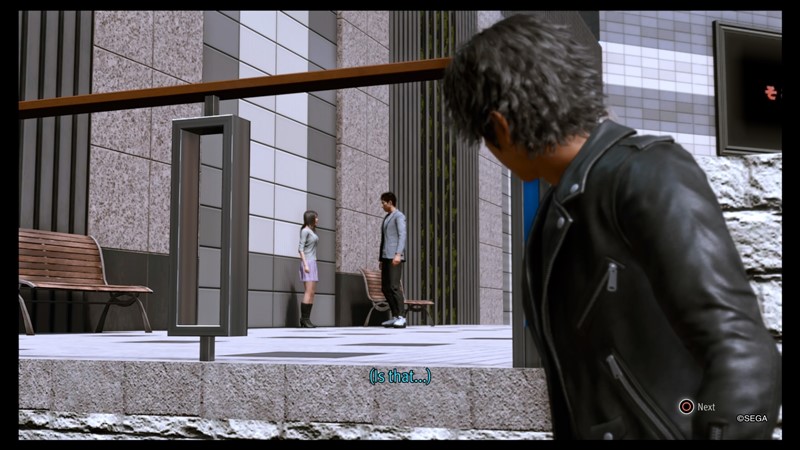 Naturally, Yagami doesn't spend the entire game picking fights with random people on the street like you would in GTA - the gameplay also blends classic detective game elements like stealth, tailing suspects and the occasional platforming sequences, which honestly aren't really worth discussing in detail. What is worth writing home about, however is the variety of side quests available for Yagami and what you do in them.

Just so you have an idea of what the detective can do in his spare time, you can try out old SEGA Master System titles in the arcade, tackle the School Stories mode with Seiryo High's Mystery Research Club, enjoy rhythm games with the Dance Club or even engage in competitions with the Robotics Club, to say nothing of quirky side quests like the one above where you help Tsukumo fetch his limited-edition figure. In fact, you can even get drunk if you so wish, and although you do have to be careful not to go overboard, Yagami's EX gauge fills faster when he's inebriated, and the occasional spot of drunken kung fu never fails to liven up the situation. 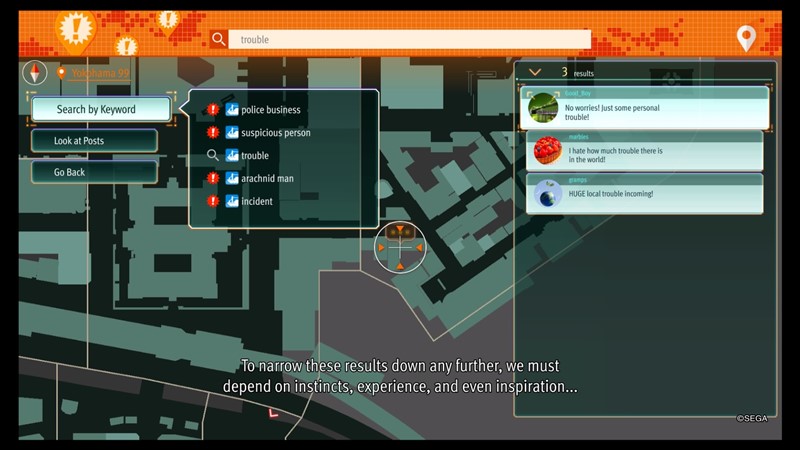 And then there's also the part where Yagami can...well, for lack of a better phrasing, actively look for trouble. As you edge into the mid-game, Tsukumo asks you to take his latest app for a test run - one that narrows down trouble before it occurs by looking for keywords on social media. Essentially, you'll have to roll with your detective's instincts and identify messages that actually correspond to unfolding crimes, which is certainly a novel way of introducing miscellaneous side quests.

However, this is also a good opportunity for me to bring in my one gripe with Lost Judgment's gameplay - the seemingly half-assed open-world. Although the game does afford you a reasonable amount of explorative freedom, you'll be locked into certain regions for the vast majority of your playthrough, and most of the actual "free play" is limited to the post-game. Granted, Lost Judgment isn't exactly marketed as an open-world title, but I certainly wouldn't blame you for feeling a little shortchanged when it comes to exploration given how amazing the game looks and feels in general. Accordingly, it's quite disappointing that we can't just stroll through the entire city on a whim when we're taking a break from the main quests until after the story has been done and dusted. 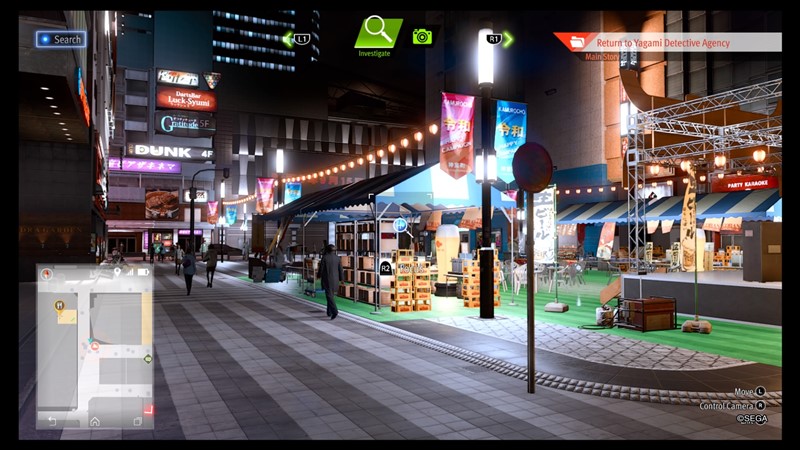 Still, Lost Judgment is very, very far from being a bad game. It might start off a little slower than most and be a little restrictive when it comes to exploration, but I'd wager that its intriguing narrative, engaging combat and surprisingly diverse gameplay more than make up for it. Even among other JRPGs, the cohesiveness of its package is quite impressive, and at the very least, it still functions as a feel-good game even if all you want to do is beat some baddies up. In my opinion, the characters are all given adequate space to shine and develop, and at the end of the day, the player doesn't feel like they're merely playing a game. Rather, the unusual way in which Ryu Ga Gotoku Studio has chosen to deliver "immersion" makes the player feel like they're actually a part of the Yagami Detective Agency as well - solving crimes, kicking ass and of course, looking absolutely cool doing it. An easy 8.5/10.

Write a Review
Compare This | Specifications
Excellent aesthetics and presentation across the board
Intriguing and somewhat realistic narrative
Impressive diversity of side quests and miscellaneous tasks
Flashy, dynamic and immensely satisfying combat that's easy to learn
Being able to whoop an army of delinquents
Limited explorative freedom
Narrative can start off a little slow
Bullying sucks. Period.
Our articles may contain affiliate links. If you buy through these links, we may earn a small commission.
Sponsored Links