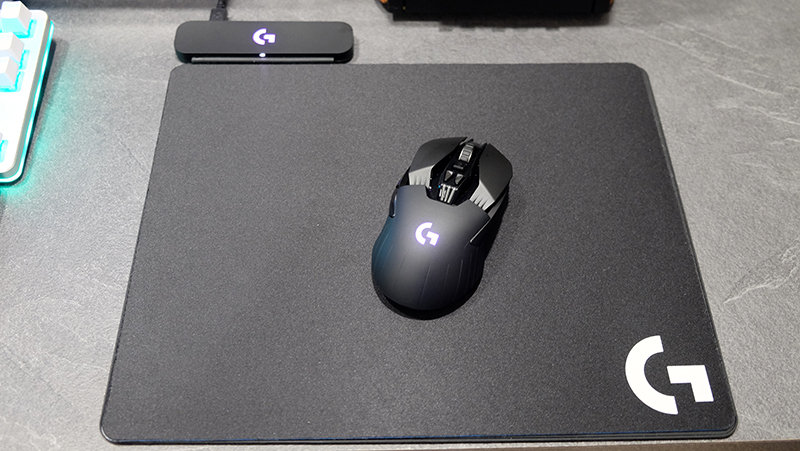 But what I’m interested in today is its PowerPlay mouse mat, which offers a new way to think about how you should use your wireless gaming mouse.

First announced last June, the PowerPlay mat has since inspired a bunch of competing solutions from brands like Corsair, Mad Catz, and Razer. It’s difficult to say whether or not gamers will actually take to this, but it’s clear that manufacturers see enough promise in the idea to attempt to woo gamers who want nothing more than to banish all wires entirely.

The idea behind the PowerPlay mat is pretty simple. It doubles up as a wireless charging pad, so you never need to plug in your mouse to charge again. Furthermore, you can continue using the mouse as it charges, so there’s no need to leave it charging overnight on a specific spot on the mat. 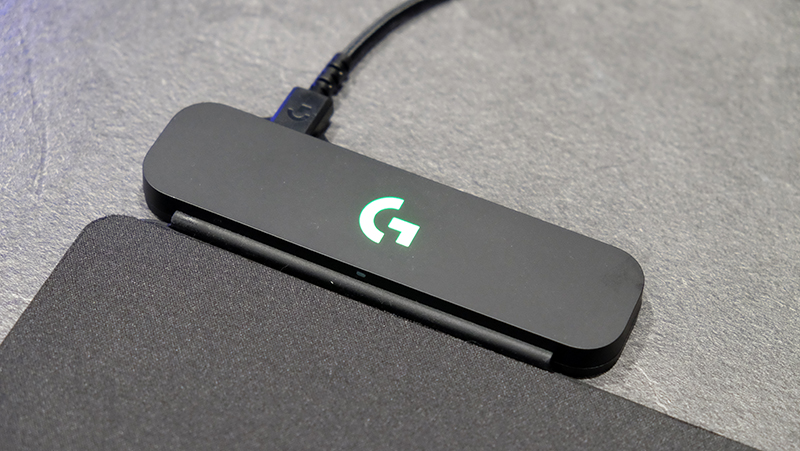 At first glance, this is a pretty appealing prospect, as it means you don’t have to periodically check on the battery level on your mouse. It’s truly hassle-free, as you don’t have to worry about things like plugging in the mouse before you go to bed.

Indeed, the wireless charging system worked flawlessly, and I didn’t experience any performance hiccups or issues with charging or the battery running out. I used it with Logitech’s G903 mouse, one of the two that you can currently use with PowerPlay, which started out with its battery at around 60 percent. It went up to around 80 percent after about four hours of web browsing, but this is a lot slower when you’re gaming.

Logitech's Lightspeed wireless interface is impeccable here as well, and the mouse tracked my movements without any problems and proved thoroughly reliable.

Overall, the PowerPlay wireless charging system is slow, and it’s a far cry from what you’ll get when charging over USB. That’s not a problem when it comes to day-to-day use since it’s constantly charging anyway, but you’ll want to opt for wired charging if you intend to charge the mouse before taking it out for a LAN party.

In addition, you’ll notice that the mouse will almost never charge up to a 100 percent on the PowerPlay mat. Instead, it cycles between 85 and 95 percent battery, part of Logitech’s design to minimize power emission and optimize battery cycles.

The system works its magic by generating an electromagnetic field across most of the surface. This extends for a few millimeters above the surface, which is why it’s able to accommodate a separate, removable mousing surface.

You’ll have a choice of either a hard or soft mat, and you can swap between the two depending on your personal preferences. I tend to favor cloth mats, so what was the one I went with. It provides a slightly slower glide than most cloth mats I’ve tried, so it’s better for games that require greater precision and more control, such as FPS games.

On the other hand, the smoother hard mat offers a faster glide with less friction. If you find the cloth surface too slow, this is the one you should use instead. 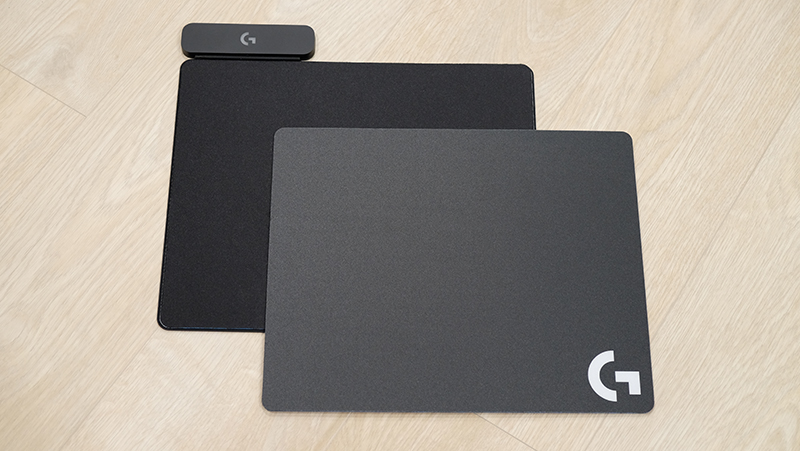 The final component of this setup is a small, round puck that sits in the base of the mouse. This PowerCore module, as Logitech calls it, transfers the charge from the mousepad to the mouse. It clicks securely into place with magnets, and you can replace it with a plastic dummy piece if you’re using the mouse alone. 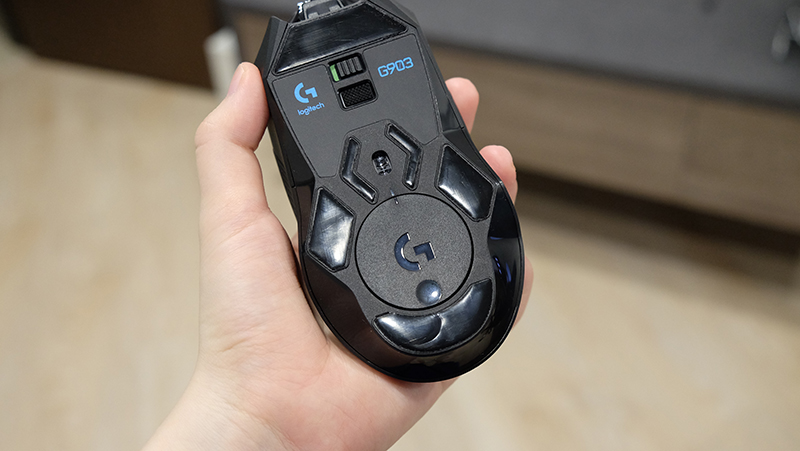 The module is interchangeable between both the G703 and G903 mice, but this is also one of the biggest limitations of the PowerPlay system. It currently only supports these two mice, so you’re out of luck if neither appeals to you. 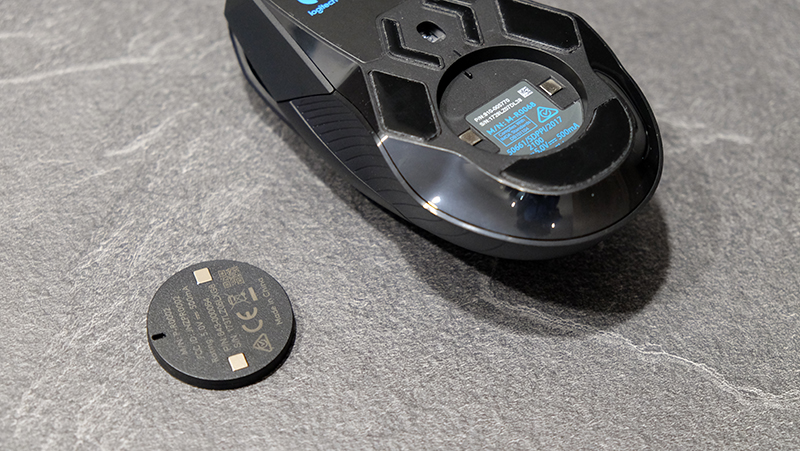 However, there’s no doubt that it works seamlessly, and the mouse is good to go from the second you power it on, with no need for any sort of pairing. With no delays, stuttering, or lag, it’s a great experience for those skeptical of wireless mice.

Having said that, the medium-sized pad still feels a little smaller than what I’d like. It measures approximately 344 x 280mm, not including the control module at the top of the pad. It’s a bit on the short side, and I found myself often bumping into the plastic module. While I didn’t run out of mousing area because I don’t use that low a sensitivity, it might cause issues for those do. 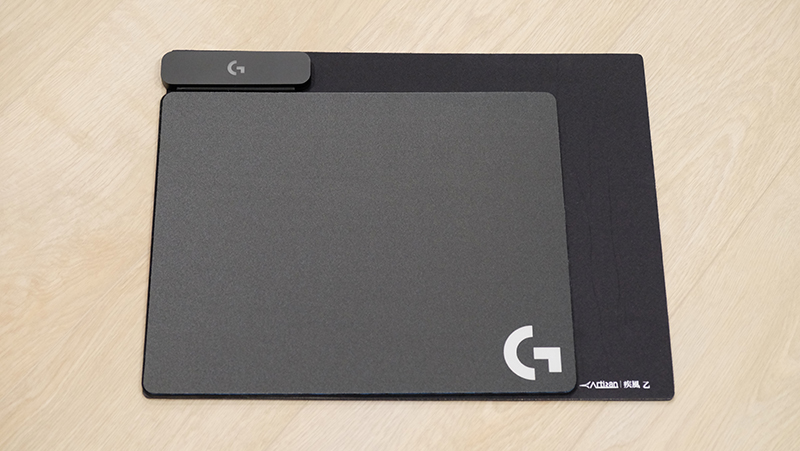 One reason for this could be the difficulties in getting the charging field to cover a sufficiently wide area. As it is, the existing field already doesn’t span the entire pad. You don’t notice this now because of its smaller size, but it’d definitely have been more obvious if Logitech opted for a bigger mat. Unfortunately, this means I also can’t see esports professionals picking this one up, as the limited surface area is likely going to be a problem.

Then there’s the issue of price. This is an expensive, proprietary solution that locks you into a single brand with only a couple of mice options, so it’s quite a tough sell. The PowerPlay mat alone costs S$199, a stiff asking price that comes up to S$358 with the G703 and S$448 with the G903.

Furthermore, after using it for a week, I have my doubts about how truly novel it is. There’s still a wire going out of the mouse pad, so you’re really just reversing roles and transferring the cable from a traditionally wired component to a non-wired one. And surely, plugging your mouse in occasionally to charge isn’t a chore that warrants a few hundred dollars to get rid of.

That said, I have to acknowledge that a wired mouse pad is easier to deal with than a wired mouse, as the cable is mostly stationary and you don’t have to contend with problems like drag.

All things considered, the PowerPlay mouse pad is a godsend for all those who really dislike their mouse being tethered to their PC (or if you’re just really, really lazy). It performs great and once again shows that wireless peripherals are now truly on par with wired ones. But while there's a ton of potential here, Logitech needs to offer more, and cheaper options before this will gain traction in the mass market.

Write a Review
Compare This | Specifications
Performs flawlessly
Choice between hard and soft mats
Eliminates any need to plug mouse in to charge
Only works with two Logitech mice
Can feel a little small
Very expensive
Our articles may contain affiliate links. If you buy through these links, we may earn a small commission.
Sponsored Links