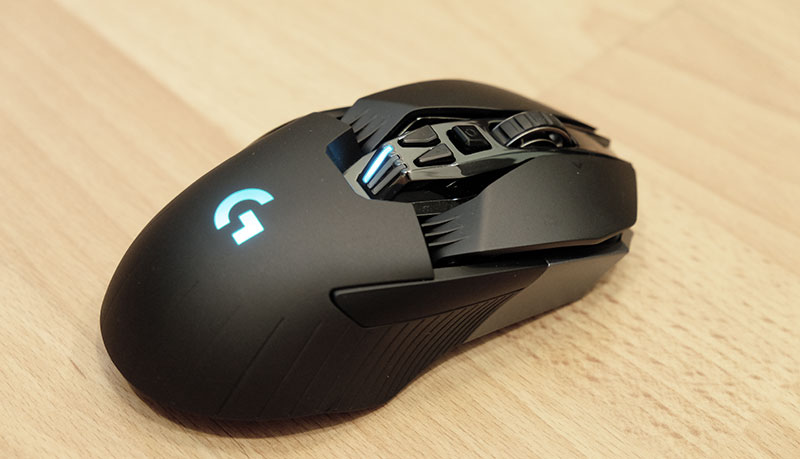 When it comes to design, there’s a lot to like about the mouse as well. First off, its weight, or rather the lack thereof. At a mere 107g, it is freakishly light, and I found myself half wondering if I had forgotten to install the battery (it’s a built-in unit). So if you favor heavier mice because they give you better control, you’ll probably want to think twice before getting the G900.

Logitech has been quite creative when it comes to reducing the weight of the G900. This boils down to the small things, like the thin wall molding and scroll wheel that ditches the conventional solid design in favor of a hollow design resembling bicycle spokes. The weight is even more striking when you consider the mouse’s size. This is not a small mouse, and you’ll need fairly large hands if you want to palm it.

And speaking of grip styles, Logitech says that the mouse will take to a variety of grips, including palm, fingertip, and claw grips. There’s some truth to that, seeing as the G900 has a rather generic, oblong shape that doesn’t prefer one grip over another, but fingertip gamers may probably prefer a slightly shorter, more compact mouse. 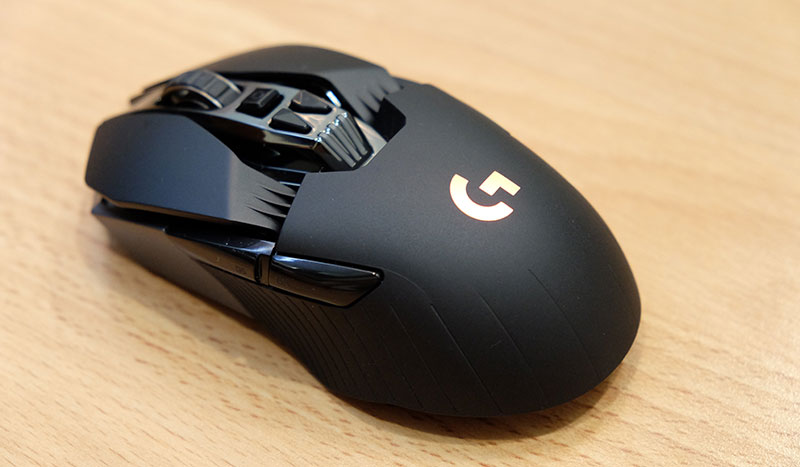 The mouse shape was also one of the few areas where I wasn’t too satisfied with the G900. As someone who prefers smaller mice – I’m a big fan of the Logitech G100S – the G900 could be a tad bit unwieldy at times. So although I can’t fault the tracking of the mouse, gaming over long hours could get a little tiring because I wasn’t used to such a large mouse. But if you prefer big mice, the G900 is right up your alley.

This is also an ambidextrous mouse, with options to cater to both right-handers and southpaws. There are actually painfully few mice out there that left-handers can use, and the selection of good mice numbers even fewer. Now, those ranks have been bolstered by the G900, which features modular side buttons that can be swapped out according to your dominant hand. They click in place with magnets, and even though they are easy enough to remove, at no time did I feel like they were in danger of falling off. Logitech has also included blank pieces to block out the buttons on the other side, to prevent you from accidentally pressing them with your ring finger.

In the way of buttons, there are a total of 11 programmable ones, if you count the scroll wheel that clicks from side to side as well. Two buttons below the scroll wheel serve as DPI buttons by default, and the adjacent three LED indicators help show the current value you’re at. Above that, a separate button can be toggled to activate the “hyper-fast” scroll wheel, so you can tear through reams of digital documents with little trouble. 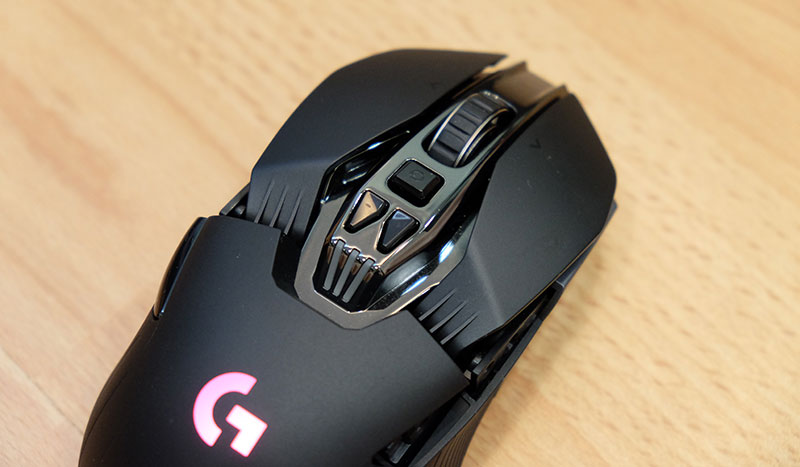 The left- and right-click buttons utilize a metal spring tensioning system with metal pivot hinges for a nice clicky feeling that has just the right amount of resistance. I’ve never enjoyed buttons that were too light to click, like Razer’s Hyperesponse buttons, and the G900 provides a judicious amount of feedback. If I were to nitpick, I’d say that the side buttons can feel a little mushy, but it’s not really all that big a deal.

Finally, the matte material that the G900 is built out of proved wonderfully adept at resisting dirt and grime. One of the most annoying things with gaming mice is to have to continually wipe down their glossy surfaces, and it’s always nice to have a mouse that holds up well under long hours.

The Logitech Gaming Software itself offers its own share of customization options. For starters, you get to pick the layout of the mouse, that is, whether you’re using it in left- or right-handed mode, or with all side buttons in place. It goes without saying that each button can also be programmed with a custom command of your choice.

In addition, you can tweak the PMW3366 optical sensor in steps of 50DPI, which should be a small enough adjustment for most folks. You’ll also get to set a maximum of five DPI levels at any one time, which you can cycle through with the DPI selection buttons. 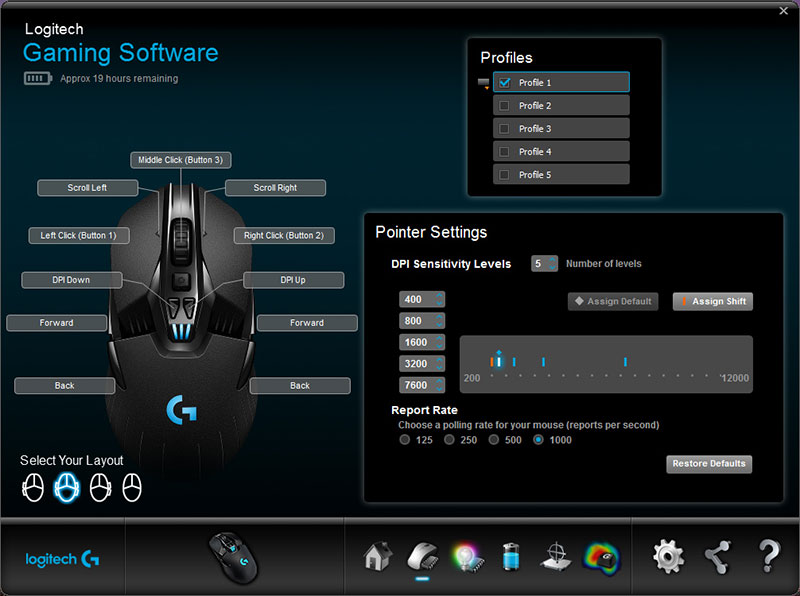 When it comes to the RGB illumination, you can customize two different lighting zones independently – the scroll wheel and the Logitech logo on the mouse’s body. There are just a few effects to choose from, like color cycle or breathing, but you can also tweak the brightness levels and the speed at which the colors change or pulse. 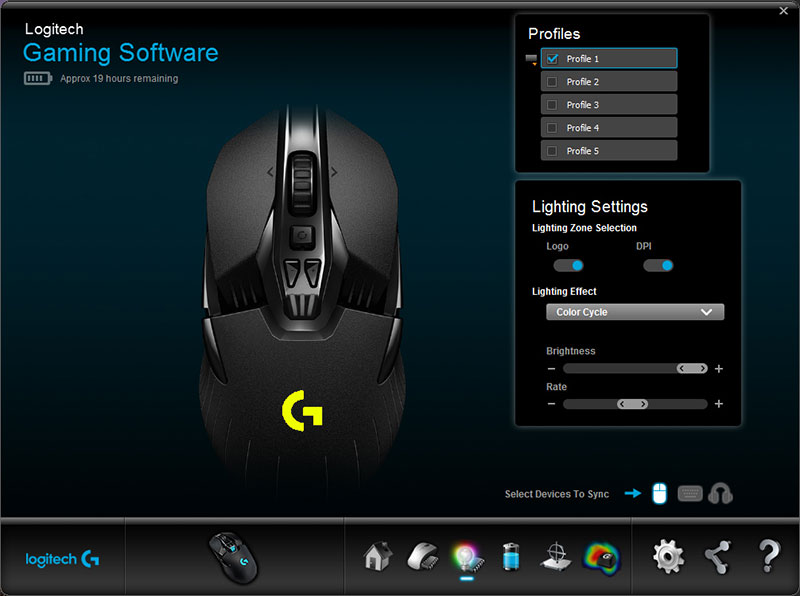 After you’re done making your adjustments, you can save your settings, which are then stored on the G900’s onboard memory. There’s room for up to five profiles, so you can preserve your settings even on a different PC.

And if you’re wondering how much charge is left on the mouse, clicking on the battery tab will provide quite an accurate estimate. 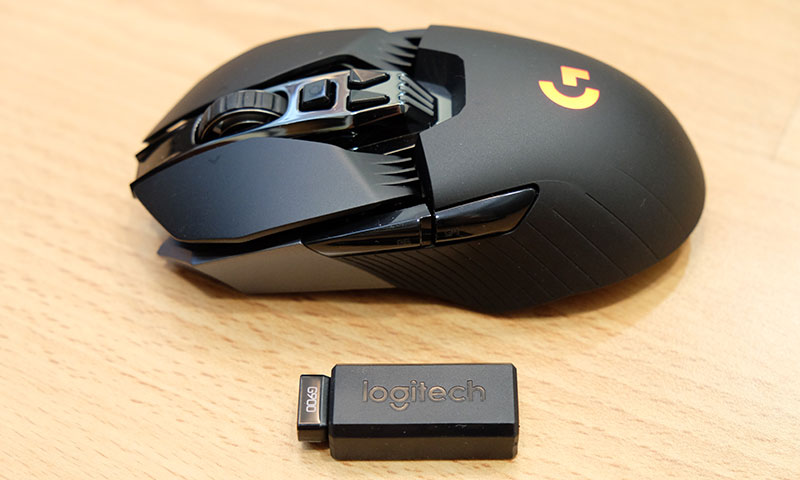 The bottom line is this: If you want a zero-compromises wireless mouse for gaming, the G900 Chaos Spectrum is the way to go. Despite its light weight, build quality and construction feel impeccable, as does its tracking performance.

There’s only one downside – price. At S$249, the G900 borders on exorbitant. Even with its wide range of features, that’s still a lot to pay for a mouse, even a very good one. Ultimately, it’s probably only those who want the best possible wireless gaming experience that will go for the G900.

But if you do decide to get the G900 after all, you’ll find it well worth your money. In this case at least, you do get what you pay for. We're just looking forward to the day when this level of wireless performance doesn't command such a high premium.