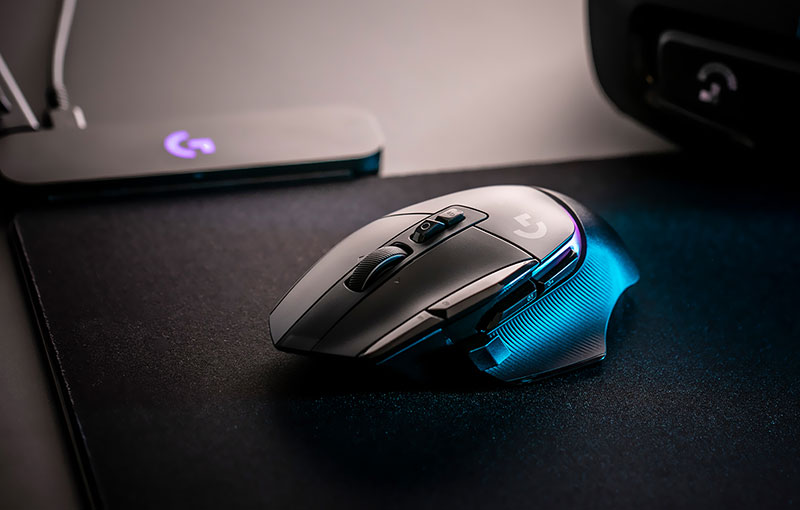 The Logitech G502 X Lightspeed is a reinvention of one of Logitech's most iconic mice. The G502 has always been a perennial favourite, thanks to its multiple programmable buttons and comfortable, ergonomic shape.

The G502 X Lightspeed builds on the improvements already made in the previous Lightspeed model, featuring additional customizability, better hardware, and design tweaks.

The Lightspeed wireless tech itself has also been updated — you can now connect two Lightspeed devices to the same receiver using the Device Pairing Tool in G Hub. At the same time, Logitech is claiming a 68 per cent faster response rate than the previous generation. 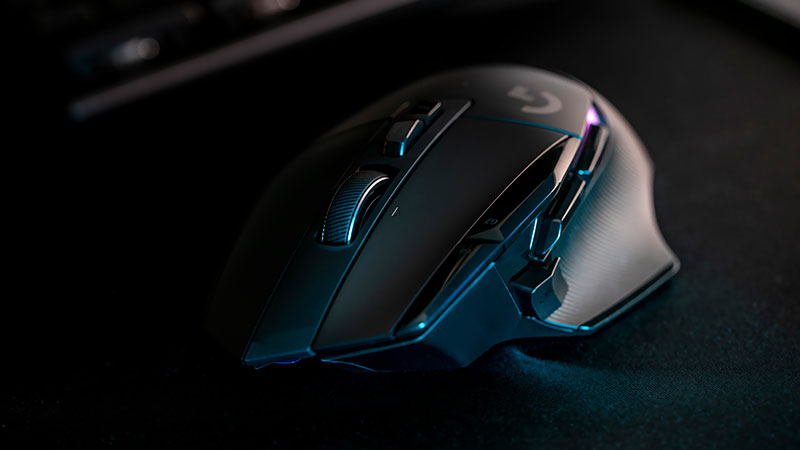 Logitech has made some progress in terms of weight reduction as well. The G502 X Lightspeed weighs 99.7g, compared to its predecessor's 114g. However, that is still a far cry from the new breed of ultralight rodents that have hit the market in recent years.

The G502 X Lightspeed is still a really heavy mouse by today's standards. But while it can feel relatively clunky in hand, its target audience probably won't mind. This is not an esports mouse targeted at FPS gamers. It is far better suited to MMO players, with six additional programmable buttons and a dedicated G-Shift paddle that lets you access secondary bindings on each key.

Two DPI buttons flank the left mouse button, while the two below the scroll wheel toggle between the dual scroll wheel modes and onboard profiles. 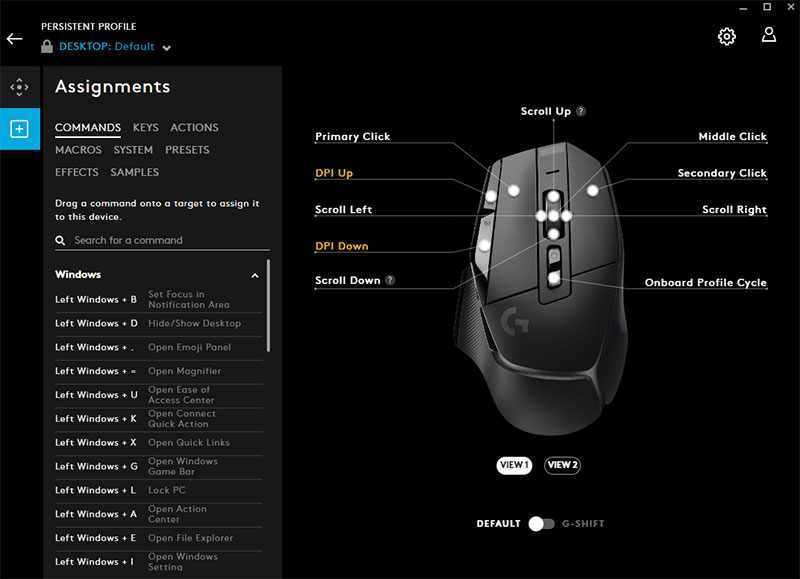 And with prominent ergonomic contours and a large ledge for your thumb, the shape lends itself primarily to the palm grip. This is also not a mouse for those with small hands — I had trouble reaching the G-Shift paddle and topmost DPI button comfortably without shifting my hand forward.

The G-Shift paddle is modular and does support two different orientations. You can flip it around to bring it closer to your thumb, which should help some people reach it more easily. Logitech has also included a rubberised blank cover, if you don't want to use the paddle at all.

One of the most nifty features is the dual mode scroll wheel. It supports both hyperfast and a ratcheted mode, so you can scroll through long documents more easily and switch to a more precise mode when gaming. There are also left and right tilt functions for some extra key bind functionality, or simply for navigating Excel spreadsheets.

The G502 X Lightspeed also boasts new Lightforce Hybrid optical-mechanical switches, which Logitech says combines the speed of optical switches with the tactile feel of mechanical ones. In practice, this translates to incredibly crisp switches with minimal post-travel.

The switch still uses light for actuation like other optical switches, but it incorporates a spring blade and contact plate to retain the mechanical feel. The switch does not rely on metal contacts to produce actuation, so it is also more resilient when it comes to wear and tear.

The 2.4GHz wireless dongle can be stored in a storage compartment at the bottom of the mouse. Wireless performance has so far been excellent as expected, with no lag or dropped connections. 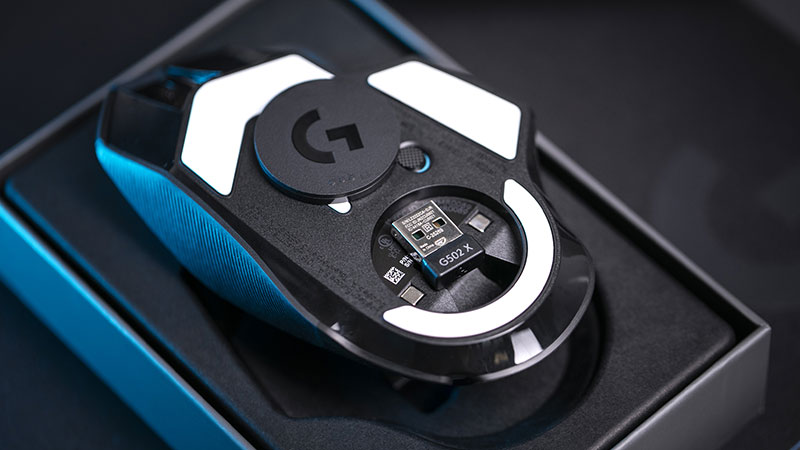 Logitech is also talking up its Hero 25K optical sensor, which is basically a software update of the previous Hero 16K sensor. This is the same one as on the G Pro X Superlight, going up to a maximum DPI of 25,600. I can't imagine anyone maximising the full range of that, but you will be able to set up to five DPI stages in G Hub. I generally prefer to stick to 800 DPI in-game, and experienced no jitter or acceleration issues.

Overall build quality appears extremely robust, with no flexing, creaking, or rattling anywhere. However, my one complaint would be the liberal use of glossy plastic. While most of the mouse's body has a matte finish, the side buttons and select areas on its flank are glossy. These areas have also already started to pick up some grease and oil stains in just a few days of use, so it's going to be a little trickier to keep the mouse looking pristine. 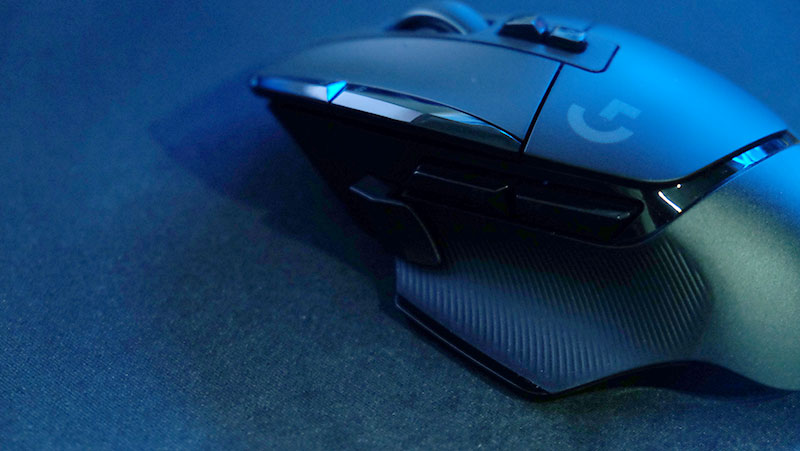 Logitech is claiming up to 140 hours of battery life. Battery life has been stellar so far — even after half a day of use on the first day, the percentage indicator in G Hub still had not budged. G Hub also provides a useful battery life estimation based on the current battery level, which is very handy when deciding if you need to plug it in to charge.

RGB lighting has been reserved for the Plus version which costs extra, but I'm not really complaining since LEDs add extra weight and drain battery.

The mouse also marks the first time Logitech has implemented USB-C charging on a gaming mouse. This change has been a long time coming, and even the G Pro X Superlight still uses micro-USB. Hopefully, this is the start of Logitech leaving behind micro-USB for good.

The cable itself is a regular, run-of-the-mill rubber cord. It is fairly soft and supple, but it would have been nice to have a paracord-style cable included. 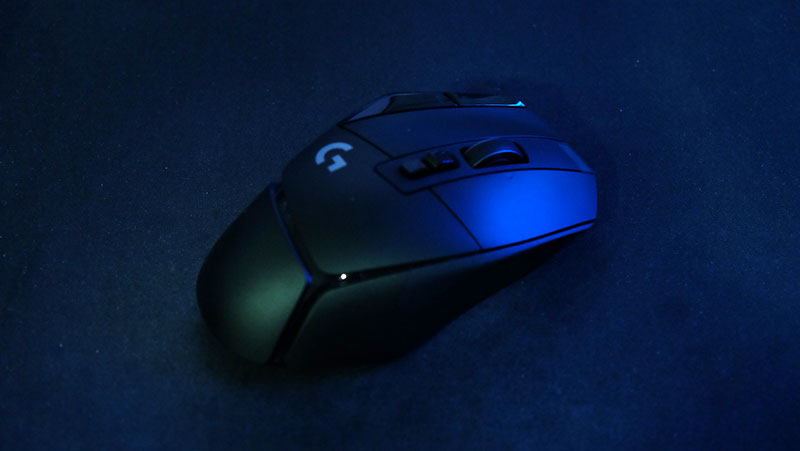 The G502 X Lightspeed iterates on a proven formula, and it will no doubt endear itself to fans of its predecessors. At S$209, it is fairly pricey, but it comes packed with a bevy of features and deep customizability.

Its weight and shape may not be the best, but for those who play single-player open-world titles or MMO games, it is right up their alley. Its closest competitor is the Razer Basilisk V3 Pro, which is pricier but comes with Bluetooth and a nicer paracord cable. However, the Basilisk is also heavier, so it really comes down to a matter of personal preference.

But if you're in the market for a solid all-rounder that can handle both work and play, you can't really go wrong with the G502 X Lightspeed. You can get it now on Logitech G's Shopee and Lazada official stores.