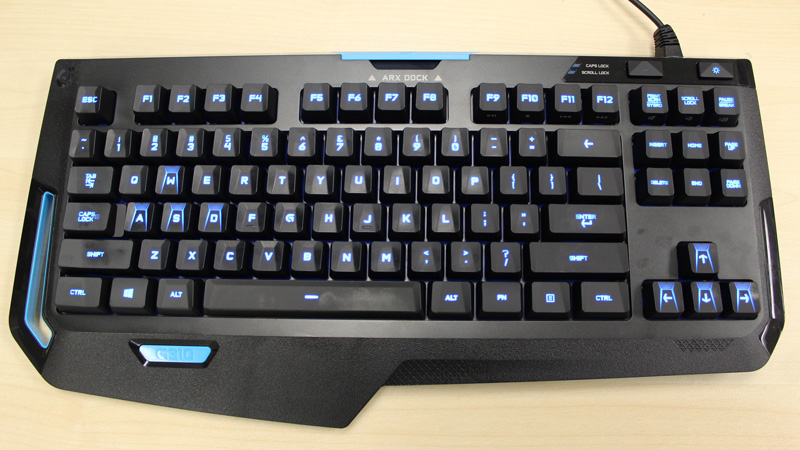 Not really the dawn of a new age

It's hard to follow up on a good opening act, which probably explains why most movie sequels are flops. The urge to go bigger is always there, to top what's so successful in the first one by adding more of it for the follow-up. Logitech's done pretty much the opposite to the G310 Atlas Dawn. Instead of trying to top the G910 Orion Spark with a keyboard that has more of everything, the company has decided to pare down on some of the frills and released a compact TKL version of the keyboard. Just to be sure you're aware of the "TKL" acronym, it stands for "ten-key-less", or in other words, a keyboard without the 10-key number pad.

As a follow-up to the G910 Orion Spark, the new G310 Atlas Dawn shares many of the same design cues as the former. As a result, the two keyboards are similar in not just looks, but also in the way they feel and work. But before you dismiss the G310 Atlas Dawn simply as a basic version of the G910 Orion Spark, let's take a close look at what makes this TKL keyboard keyboard stand out from its more illustrious stablemate.

Despite being smaller, the G310 Atlas Dawn still apes many aspects of the bigger G910 Orion Spark, right down to the build and material used. The keycaps are made from a smooth plastic, while the keyboard itself is divided into sections of textured, glossy and matte plastic.

The G310 Atlas Dawn is the second Logitech mechanical keyboard to use Logitech's custom Romer-G keys, the exact same type of keys that premiered in the G910 Orion Spark. The Romer-G switches here come with the unique concave keycaps, which are angled at the sides to guide your fingers into the best position to depress the key. 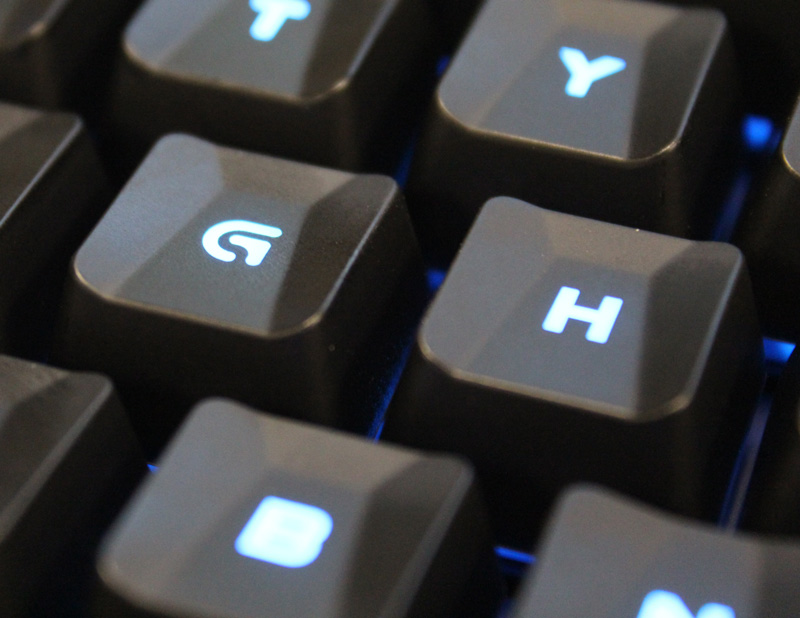 As Logitech puts it, the Romer-G keys have a very low actuation point of 1.5mm, which means very little pressure is needed to trigger them. In our use, they feel just like Cherry MX Red switch based keys, though perhaps a bit stiffer. Even though the new Logitech G310 Atlas Dawn uses the same switch as the G910 Orion Spark, we felt that the keys were a just tad stiffer.

There's not much to say about the G310 Atlas Dawn as it is a rather spartan keyboard. All the extra macro and media shortcut function keys found on the G910 Orion Spark have been stripped. The only remaining extra functions are the backlight control and the Windows lock (which disables the Windows shortcut button). The wrist rest feels similar to the one on the G910 Orion Spark, though it's a tad shorter now, making it much more comfortable to use.

We miss the rather useful volume rollbar that the G910 Orion Spark had, but other than that, the TKL configuration of the the G310 Atlas Dawn didn't really faze us too much. It's great that the backlight control has different intensity levels, allowing users to quickly adjust the brightness levels of the backlights without needing to launch the Logitech Gaming Software utility.

Speaking of backlights, the Romer-G system's backlights are the brightest we've seen on a keyboard - equivalent or brighter than what we've experienced with the G910 Orion Spark. Unlike the bigger brother, the backlights on the G310 Atlas Dawn only project a single color, which is the blue glow you see in our photos. 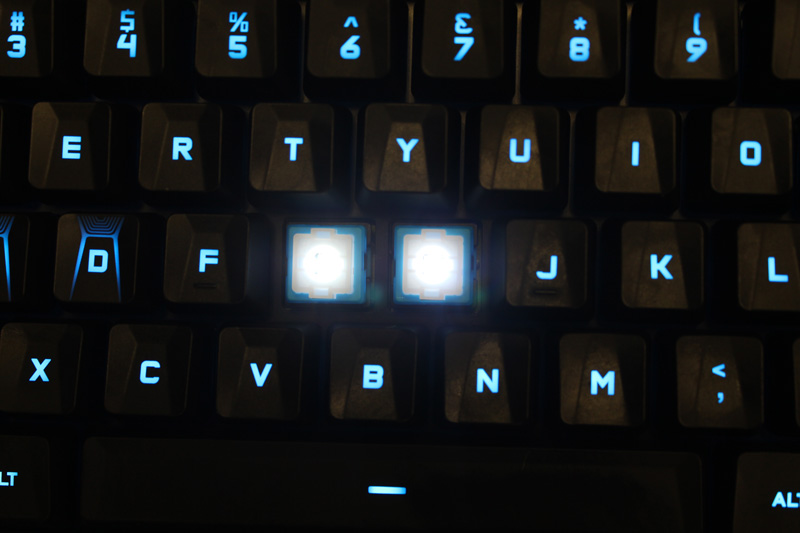 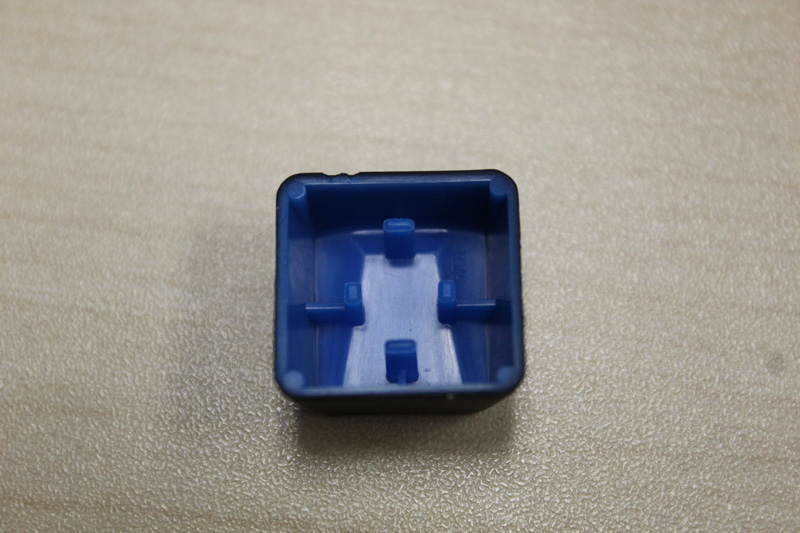 Since the Atlas Dawn is a TKL keyboard, it's more compact than the usual keyboard to facilitate packing the keyboard for LAN gameplay and freeing up valuable desktop space for more mouse roaming area. Due to the size constraints imposed on the G310 Atlas Dawn for its TKL nature, some users might find issues with the keys being too close to each other.

Like the G910 Orion Spark, the G310 Atlas Dawn also doesn't come with detachable wiring. Detachable cables are very much preferred especially since the Atlas Dawn is a TKL keyboard that is meant to be compact and facilitate usage in tournaments. With a detachable wire, one can just swap in any length that's desired, which is especially useful for those who prefer longer cables as an option. It'd also offer better portability since you can lug it around without a cable getting in the way. 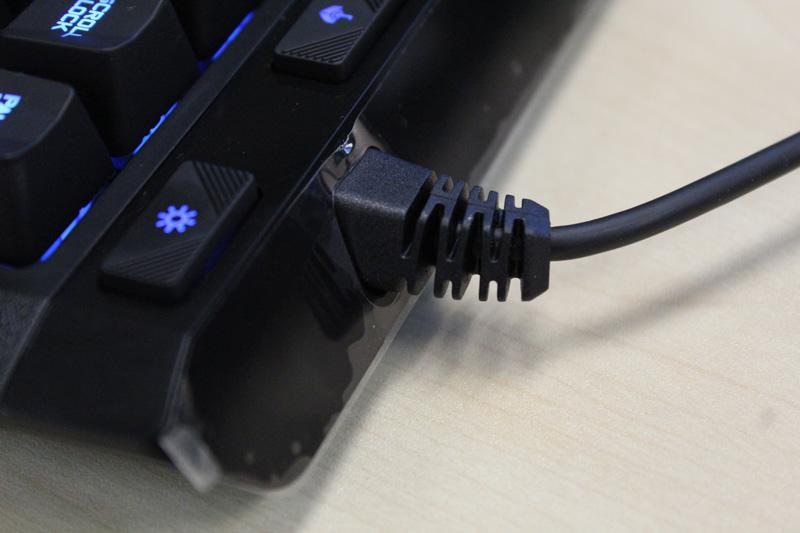 Luckily, Logitech opted to keep our favorite part of the G910 Orion Spark for the G310 Atlas Dawn as the Arx Dock feature returns yet again, in improved form this time.

Despite its fancy name, the Arx Dock is actually a smartphone or tablet holder, and a very useful one at that. We love that Logitech actually gives you a place to place your smart device in a prominent position even if you're not using the Arx Control capabilities. The Arx Dock on the G310 Atlas Dawn is a definite upgrade from the G910 Orion Spark as it's removable, which means you can place it wherever you like. With the Arx Dock being removable, the G310 Atlas Dawn addresses the problem of the Arx Dock not being in an optimal position for the user. 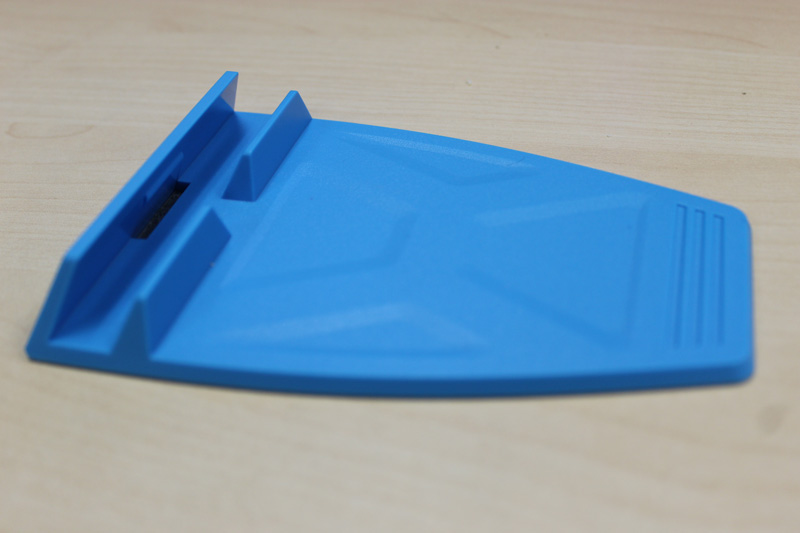 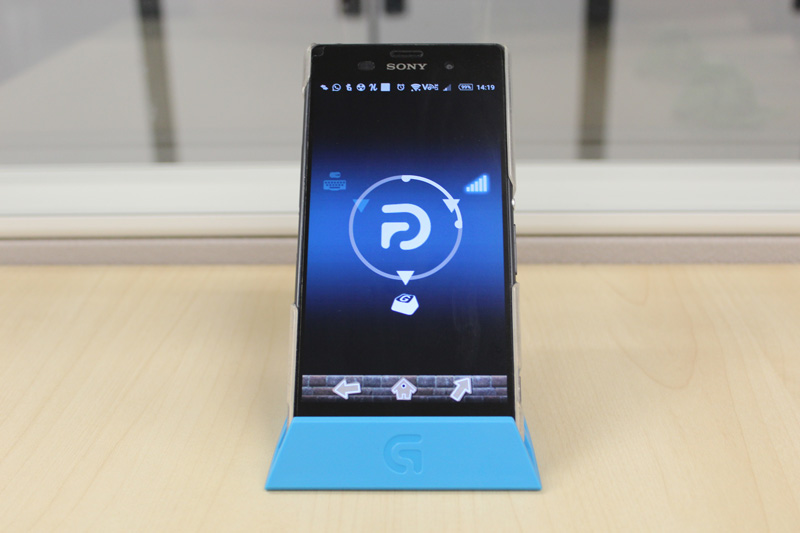 Like the G910 Orion Spark, the G310 Atlas Dawn has stubby legs as well. They add about a single cent to the overall height when used, which we feel is too little and doesn't add much angle to the keyboard. Of course, if you don't use a keyboard's legs, this is unlikely to impact you in any way.

For those who detest unsightly cables running around, it's worth noting that Logitech didn't create any cable channels underneath the keyboard to run the USB wire through. If you're one who likes everything neat and tidy, this omission is sure to irk you. 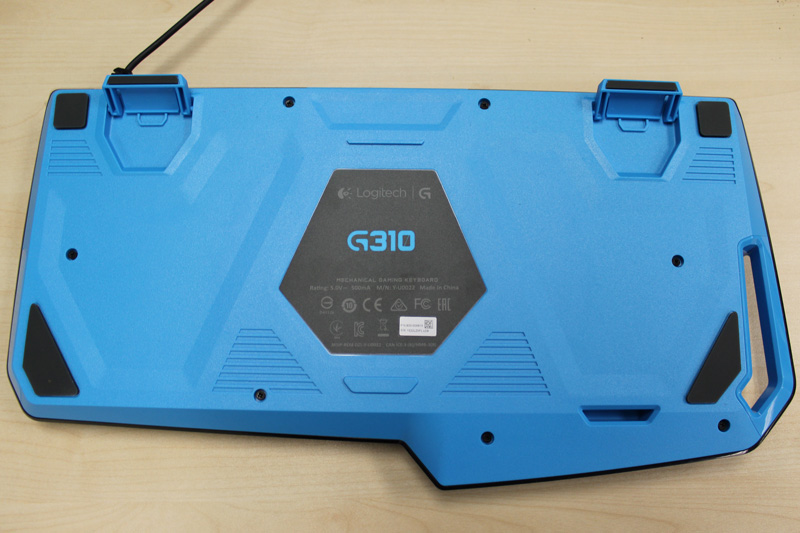 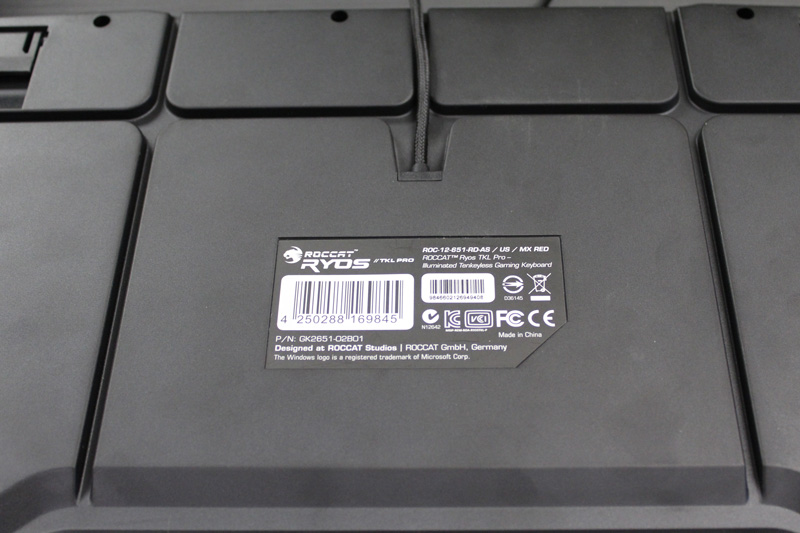 Even though the G310 Atlas Dawn doesn't come with as many features as the G910 Orion Spark, we'll want to install the Logitech Gaming Software (LGS) to get the best out of the keyboard. If you're unfamiliar with the LGS, it's Logitech's universal utility that lets you adjust and modify your peripheral settings to your heart's content. Since the G310 Atlas Dawn has no macro keys and has little customizable effects, LGS only allows users to save and load custom profiles and also enable some lighting effects. 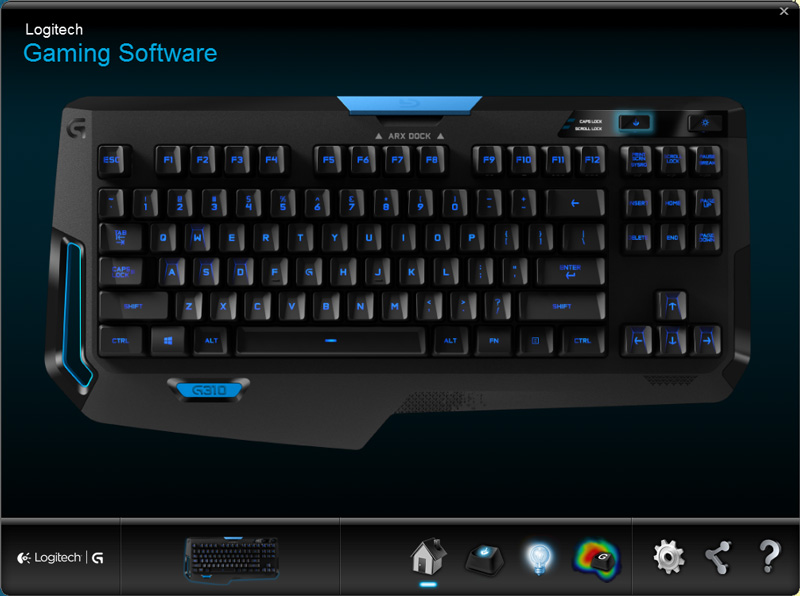 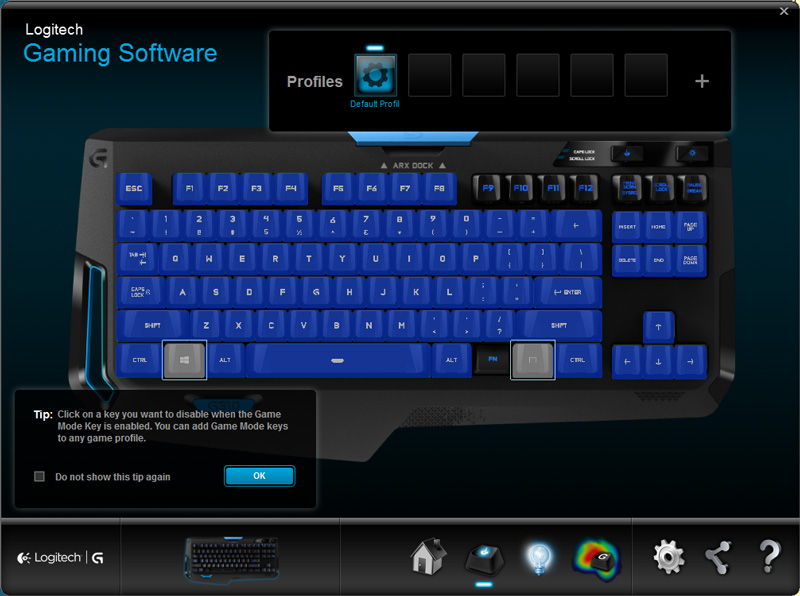 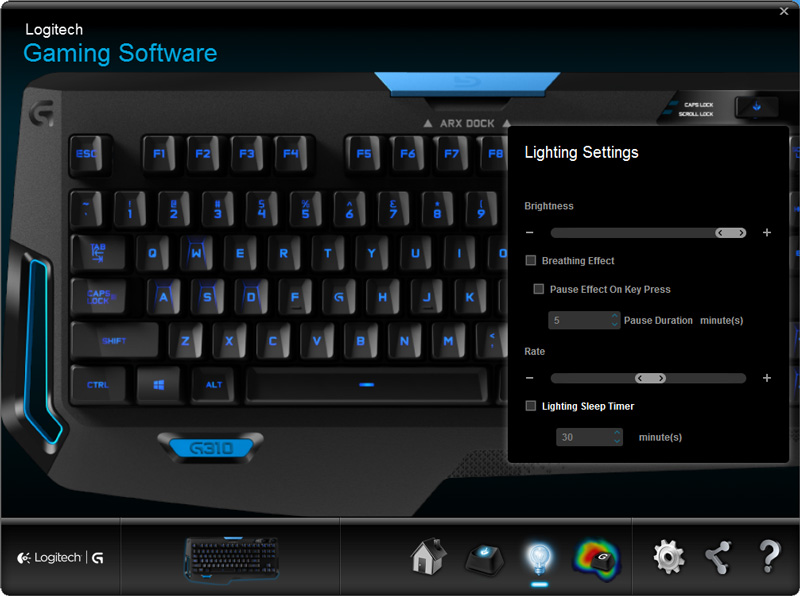 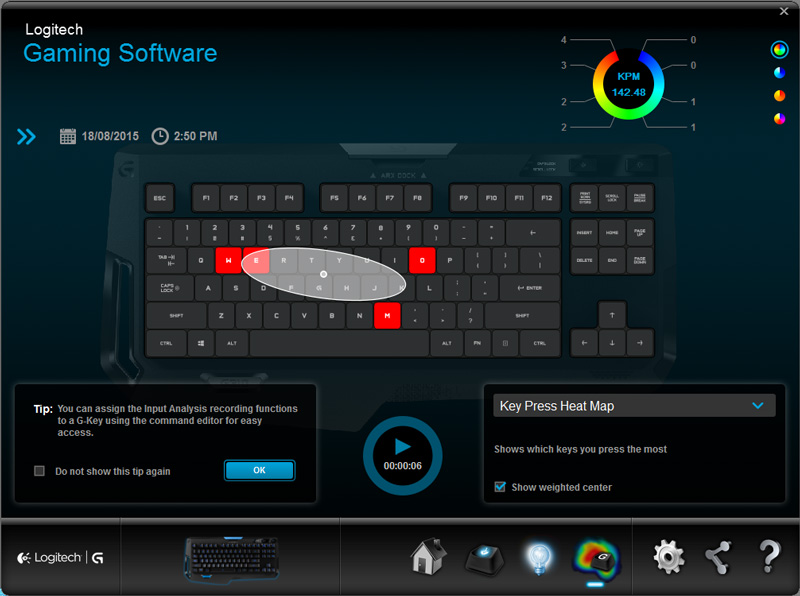 Finally, the keyboard also has Arx Control integration. Arx Control is Logitech's second screen software that can display various screens on a connected device. It also functions as a second screen for compatible games like World of Warcraft or World of Tanks. You install it on a smart device and then connect it to the same network as your peripheral. 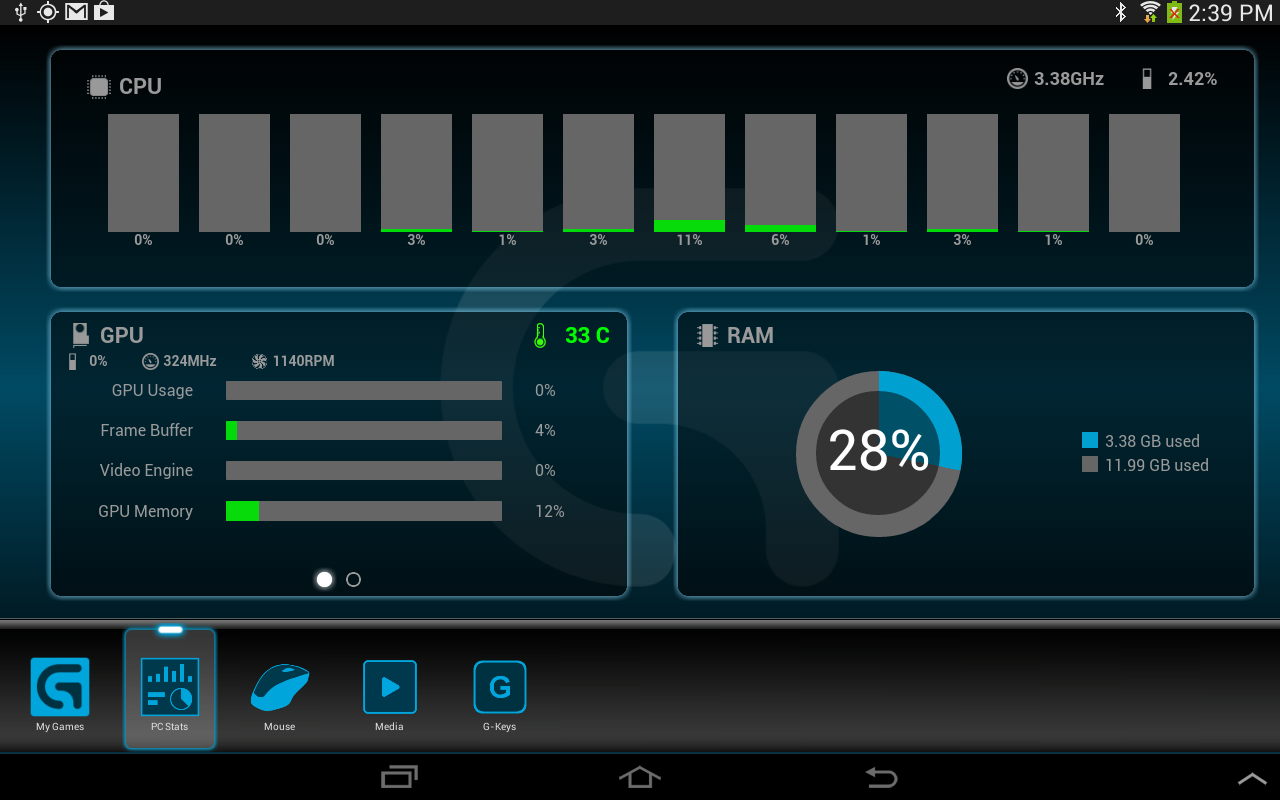 We still think the Arx Control software is an unneeded companion to the Logitech Gaming Software. We've still not found a single game where Arx Control integration meant a big difference, so unless you have to a need for a second screen with details of your GPU or RAM usage, we suggest skipping it entirely.

As with all the recent mechanical keyboards (including the NovaTouch TKL and the G910 Orion Spark) we tested, the G310 Atlas Dawn was put to the test in The Typing of the Dead: Overkill.

The Typing of the Dead: Overkill has you typing out random words in order to kill zombies. If there ever was a game where typing accuracy and speed would matter, this is it. As such, it's the perfect test of the G310 Atlas Dawn.

We instantly felt at home while using the G310 Atlas Dawn in the game. The Romer-G system was instantly familiar to our fingers and we found ourselves performing just as well as we did on the larger G910 Orion Spark, despite the TKL nature of the G310 Atlas Dawn. Like in the bigger keyboard, the concave keys on the Atlas Dawn made typing much easier as they guided our fingers directly into the keys we wanted to hit. And since the keyboard supports anti-ghosting technology, we didn't encounter issues where our strokes didn't get registered.

As we mentioned earlier in the review, the keys on the Atlas Dawn seemed a bit stiffer when compared to the Orion Spark though typing still became second nature once we got into our groove in the game. 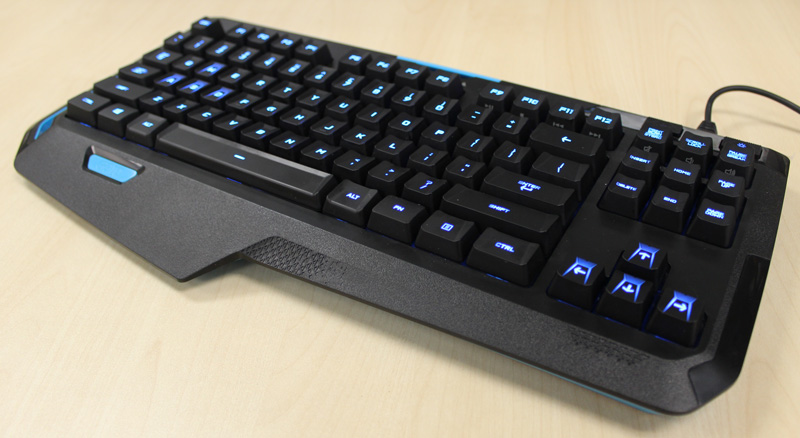 As a TKL keyboard, it is somewhat inevitable that the G310 Atlas Dawn loses much of the features of the G910 Orion Spark. Fortunately, it continues to use Logitech's own Romer-G switches, which we really like. However, some features could definitely have been brought over, such as macro keys and customization of backlights, but we suppose that would have made the G310 Atlas Dawn more costly.

Speaking of price, the G310 Atlas Dawn is a relatively cheaper keyboard than the G910 Orion Spark as it goes for S$70 less at S$179. It might be cheaper, but it's worth noting that at that price, you're forgoing the macro and media shortcut keys, colored backlights and the numpad present on the G910 Orion Spark. The trade off is that you get a removable Arx Dock, less dependence on the LGS, a much lighter and compact keyboard.

Of course, the G310 Atlas Dawn isn't the only TKL keyboard out there, though it is the only one with Logitech's Romer-G system. If you're willing to consider Cherry MX keys, the Roccat Ryos TKL Pro is a decent alternative too. It costs a bit more at S$189 but the extra price nets you Roccat's great Easy Shift [+] functionality, which gives you the option to assign a secondary function to almost any key on the keyboard.

Also, it's worth considering Cooler Master's NovaTouch TKL, which is S$110 more at S$289. The NovaTouch can use both Topre and Cherry keys and a hybrid capacitive switch system with a 1mm actuation point. The best part for long time mechanical keyboard owners is that their custom keys, be it Topre or Cherry, can easily be used on the NovaTouch TKL, which might make the asking price a bit easier to swallow.

Logitech's latest TKL keyboard isn't a bad choice at all for a gamer, though some aspects of it might not be for everybody. If you can overlook the minor limitations, the keyboard is a nice and relatively affordable compact mechanical keyboard that does exactly what it sets out to do.

Write a Review
Compare This | Specifications
Romer-G system is responsive and comfortable
Shaped keys that guide fingers in
Removable Arx Dock
Adjustable backlight intensity
Lightweight and compact
Non-detachable USB cable
Lacking macros and media function keys
Short on defining features
No built-in USB hub
Keyboard legs are too short
Keys can be a tad cramped for some
Our articles may contain affiliate links. If you buy through these links, we may earn a small commission.