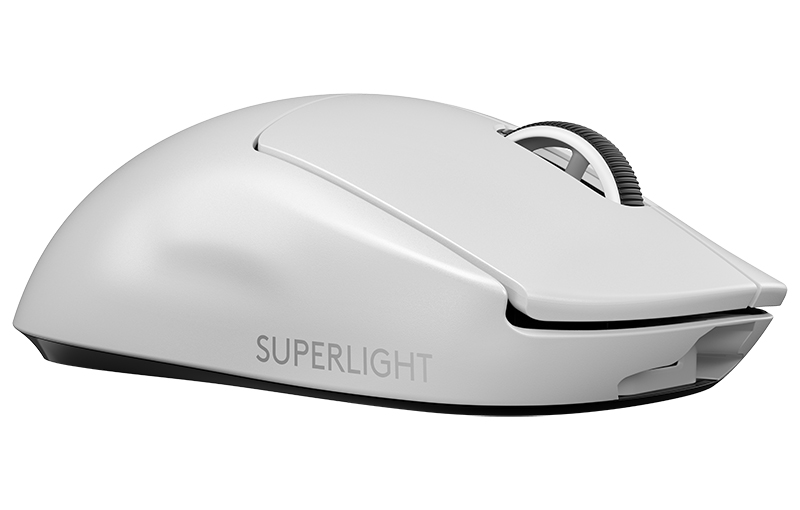 The successor to the legendary G Pro Wireless is here

Logitech is finally getting into the ultralight game, and it's doing so in the form of the successor to one of the best mice it's made. The G Pro X Superlight weighs less than 63g, making it significantly lighter than the 80g G Pro Wireless, and also the lightest wireless gaming mouse you can buy today. It is lighter even than some wired mice today that profess to be part of the ultralight crowd, such as the Razer Viper and Endgame Gear XM1, so Logitech has certainly achieved quite a feat here. It's also done that without a honeycomb shell, which some people won't go near with a 10-foot pole.

The result is a sleek mouse that looks especially stunning in its matte white finish, and which feels exceptionally good in hand. The line where the mouse's sides meet the top plate is also virtually invisible, even though you can feel it ever so slightly when running your finger over it.

Logitech did actually launch a white G Pro Wireless, but that was in the form of the limited edition Ghost model, which still had black mouse wheel spokes. Now, anyone can get the G Pro X Superlight in white, and it's got matching white mouse wheel spokes to boot, which I think is much more pleasing visually. 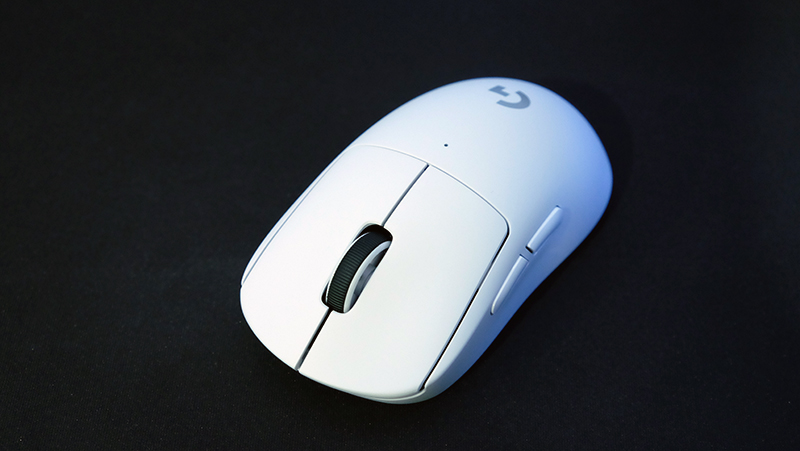 There is no rattling or flexing when pushing down on the sides, and the mouse overall feels really solidly built. There is some side to side wobble to the mouse buttons, but I only noticed it because I was looking for it, and it didn't bother me at all when I was actually using the mouse.

The clicks on the primary buttons are crisp and responsive, but given the persistent double-clicking issues that plagued the G Pro Wireless, you're probably wondering if the Superlight will face similar problems. There's no way to verify this on a brand new review unit, but for what it's worth, Logitech has reportedly transitioned to 20M Omron switches on the Superlight, which are supposed to be less prone to double-clicking. I enjoyed the feel of the buttons, and my review unit had minimal post-travel.

The side buttons are fairly springy, and there is slightly more post-travel than on the main buttons. However, I wasn't particularly bothered by this, and I was still able to execute my usual key binds in-game with little issue. The scroll wheel is excellent, offering both pleasant tactility and silence. It is really smooth as well, and feels great to use. 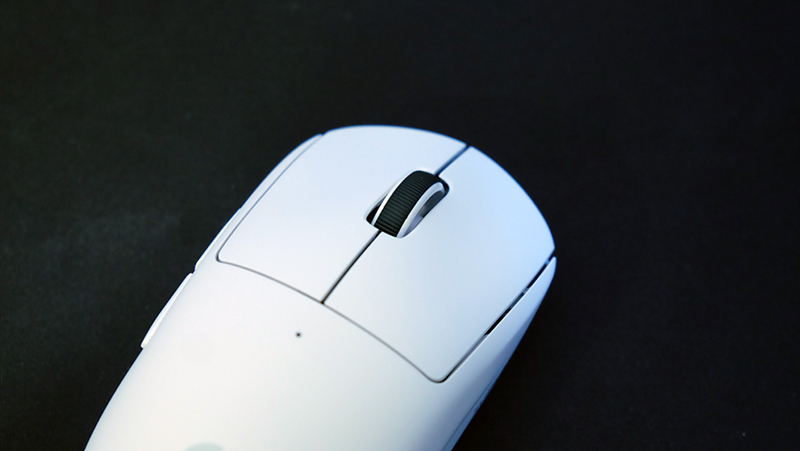 The shape of the mouse is the same versatile sculpt as the G Pro Wireless that fits a wide range of grip styles, and it is still a medium-to-large mouse that will better suit those with larger hands. This is not a flat mouse, but there also isn't a large, prominent hump that would exclude fingertip grippers, and I think most folks will adapt to it quite easily.

The sensor is the same 25,600 DPI HERO 25K sensor as on the G Pro Wireless (made available through a recent software update), and it's a mind-bogglingly high number that I can't really imagine anyone making full use of. And considering that Razer's latest sensor goes up to 20,000 DPI, gaming companies are clearly still locked in some sort of DPI race, even if it confers few tangible benefits. As expected though, tracking is flawless, with no acceleration or jitter whatsoever. As with most of the latest gaming mice released over the past couple of years, it's almost not worth discussing the sensor anymore. 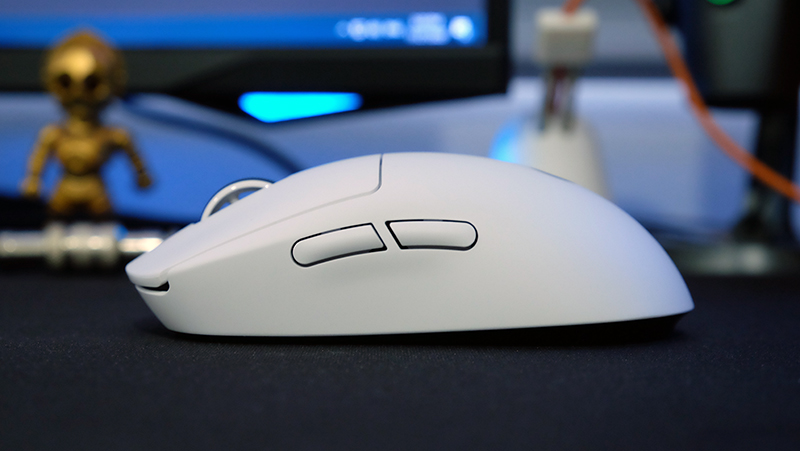 Despite their outward similarities though, the G Pro X Superlight features some significant changes when coming from the G Pro Wireless. It has stripped what some might consider either key or essential features, presumably in the interest of weight reduction, which may or may not be a deal-breaker for some folks. For starters, Logitech has ditched the support for modular side buttons, and the Superlight will only properly work for right-handers now. There is also no longer any RGB lighting on the mouse, and the Logitech G logo on the back is just a plain silver print against a white background.

Another thing that the G Pro X Superlight dropped is the DPI button. The only way you can change the DPI now is to launch G Hub and do it from there, and I can imagine some people thinking this a major inconvenience. If being able to change your DPI on the fly is absolutely crucial to you, there are workarounds like reprogramming one of the other buttons, but I get that that's not completely ideal. That said, most professional players probably don't find themselves fiddling with various DPI settings all that often, and I don't think the missing DPI button is that big of a deal. 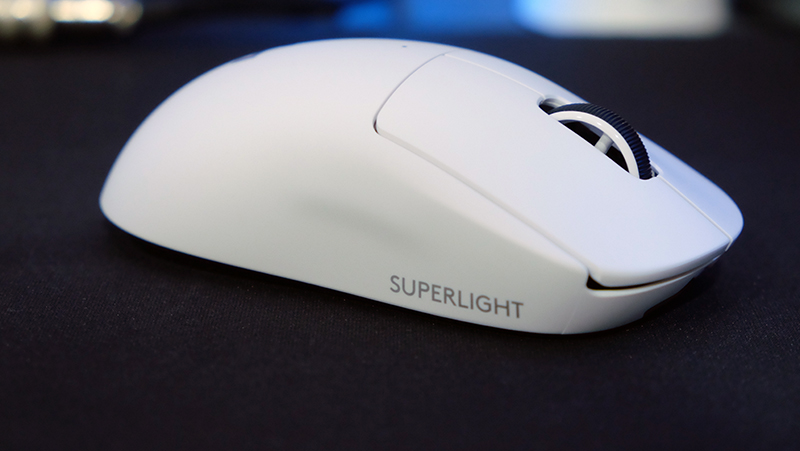 The lack of LEDs has the benefit of extending the battery life of the mouse though, and Logitech is now claiming up to 70 hours of battery life, up from 48 hours before. Indeed, battery life proved to be pretty stellar, and after days of use and hour-long gaming sessions at night, I was still left with more than 50% battery. I expect this to comfortably last you a week of heavy use, and likely even more.

Unfortunately, Logitech has puzzlingly stuck with a micro-USB cable for charging the mouse, a decision that seems almost archaic in late 2020. The cable comes with a couple of prongs to make the connection more secure, but it's really past time that Logitech started adopting USB-C. 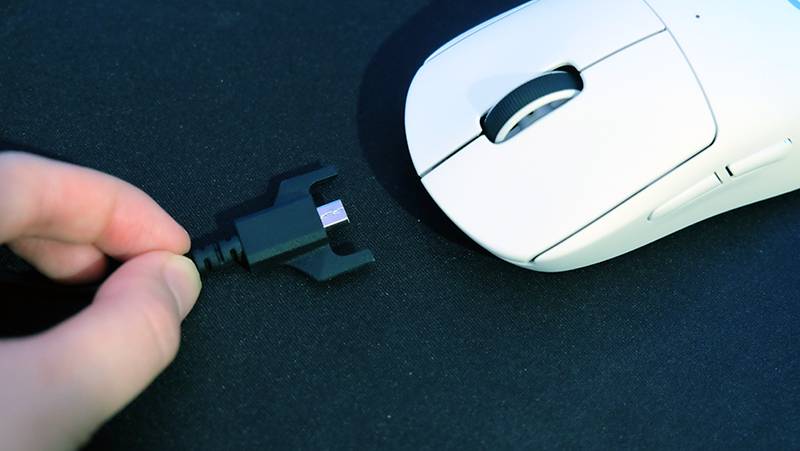 Flip the mouse over, and you'll notice another big change. Logitech has upgraded the feet to what it calls zero-additive PTFE feet, and they are indeed quite smooth and feature rounded edges so you get no scratchiness out of the box. There is also a lot of feet here, and I mean that quite literally. These are among the largest feet I have seen on any mouse, with the top feet occupying what looks to be a good third of the base. There's even an option to add even more feet, and you can swap out the cover for the dongle storage compartment with a puck covered by the same PTFE feet. The difference between both configurations is minimal, but I preferred the PTFE puck by a hair. 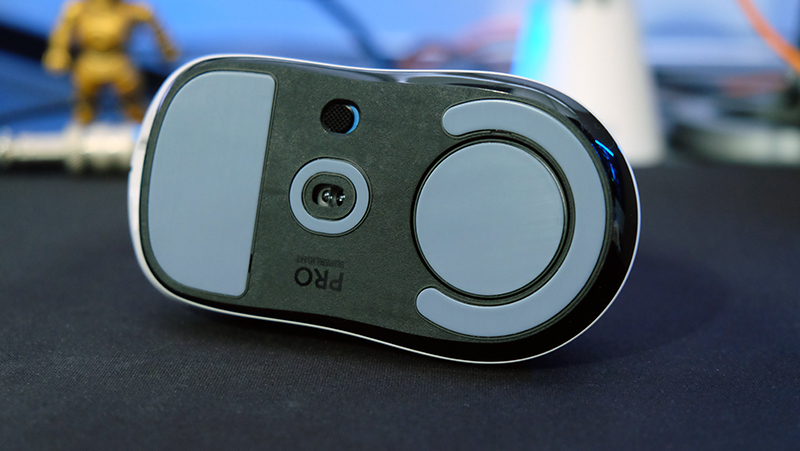 The bigger feet help provide a more even glide when you're pressing down hard on your mousepad, particularly if you're gaming on one that is slightly more squishy. It's not that big of a difference compared to smaller feet, but it does help create a more consistent experience overall.

To add on, Logitech has also included a helpful microfibre cleaning cloth in the box, alongside rubberised grip tape if you need some extra purchase on the mouse. 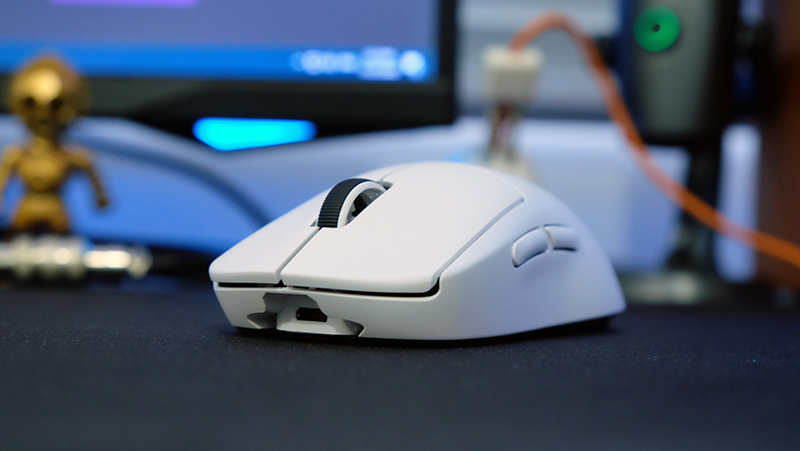 At S$239, the G Pro X Superlight is slightly cheaper than the G Pro Wireless. It's still super expensive however, and has been undercut by the Glorious Model O Wireless, which can be pre-ordered from Xtreme Solutions for just S$129. The Model O Wireless isn't as light, weighing 69g, but it's hard to argue that 6g of weight is worth paying over a hundred dollars more for. In addition, you get RGB lighting on the Model O Wireless, and Glorious is still claiming up to 71 hours of battery life.

Having said that, the G Pro X Superlight is not the game-changing mouse that the G Pro Wireless was when it came out in 2018. Wireless gaming mice with lag-free performance are common now, and the Superlight even lags behind on things like the lack of a USB-C connector. Still, that doesn't change the fact that it is an excellent mouse, and is also the lightest wireless gaming mouse you can buy today.

I'd have a much easier time recommending it if it didn't cost so much, or if the Model O Wireless didn't exist, but if you're a fan of the G Pro Wireless' versatile shape, the Superlight is almost a no-brainer.

Interested to get the Logitech G Pro X Superlight? It will soon be available at these outlets: Lazada, Shopee and Harvey Norman.

Write a Review
Compare This | Specifications
The lightest wireless gaming mouse you can buy
Comfortable, versatile shape
Excellent battery life
Flawless wireless performance
No USB-C; still uses micro-USB for charging
No DPI switcher button
No RGB lighting
Very expensive
Our articles may contain affiliate links. If you buy through these links, we may earn a small commission.
Sponsored Links