Microsoft launches an "enhanced" Surface Pro 7+ for businesses and schools 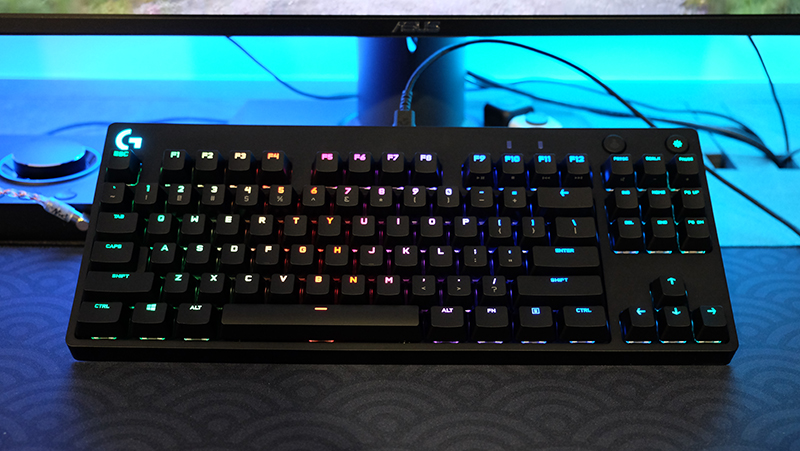 Where have I seen the Logitech G Pro X before? Oh that's right, it looks exactly like the old G Pro keyboard that was released in 2017, except it comes with hot-swappable switches this time around. The G Pro X keyboard is the latest addition to Logitech's series of esports-oriented Pro series, and I'm slightly disappointed that not much has changed in terms of design.

Don't get me wrong. There's nothing wrong with the design per se. However, it would have been nice to have a fresh, new look to commemorate Logitech finally leaving its Romer-G switches behind. The biggest upgrade on the Pro X resides under the keycaps, and the new keyboard now sports hot-swappable switches. This means you can easily pluck out the switch and change it to any other Cherry MX-style switch, so you can change up your typing experience if you ever get bored of the switches.

That's a pretty significant upgrade if you ask me, but if you looked at the Pro X, there's nothing to indicate that it's the newer version with hot-swappable switches. Even the branding on the side just reads "Pro" instead of "Pro X", so it could be the older 2017 keyboard for all I know. 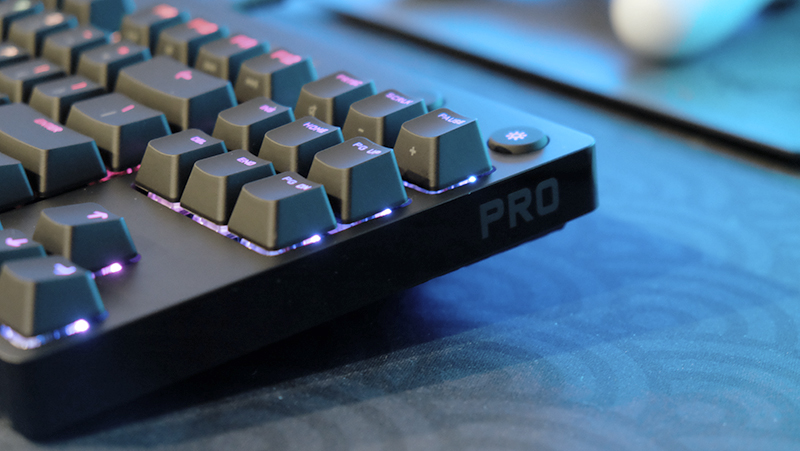 Fortunately, The G Pro X's chassis has aged pretty well, and it still looks quite good. That's no doubt due to its minimalist design and clean lines. It'll go well with just about any gaming setup, and Logitech hasn't bothered with an additional row of macro keys or anything like that. I'm personally not a fan of extra keys, and I think they add unnecessary bulk to a keyboard.

However, if you really need programmable macros, the entire function row can be programmed with your own actions or commands in the Logitech G Hub software. Furthermore, if you turn on the G-Shift toggle, you can assign an additional layer of commands to the F1 to F12 keys, effectively giving you a total of 24 keys you can customise. 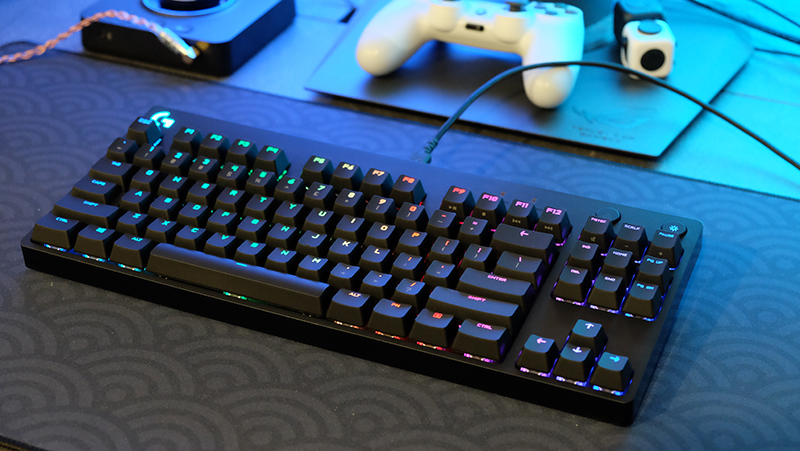 The keyboard is constructed mostly from plastic, and it sports a matte finish on its top plate and a glossy frame. It is quite well-built overall, and there's hardly any discernible flex. The switches are also mounted on a metal plate for some extra rigidity. An illuminated Logitech G logo sits in the top left corner, and you'll find Game Mode and LED toggle buttons in the top right. There are no dedicated multimedia keys here, but seeing as how this is a keyboard targeted at pro players, that's not too big a deal.

Flip the keyboard over, and you'll see two sets of rubber feet with either a 4° or 8° angle. I generally preferred the larger set, which gives a steeper incline. 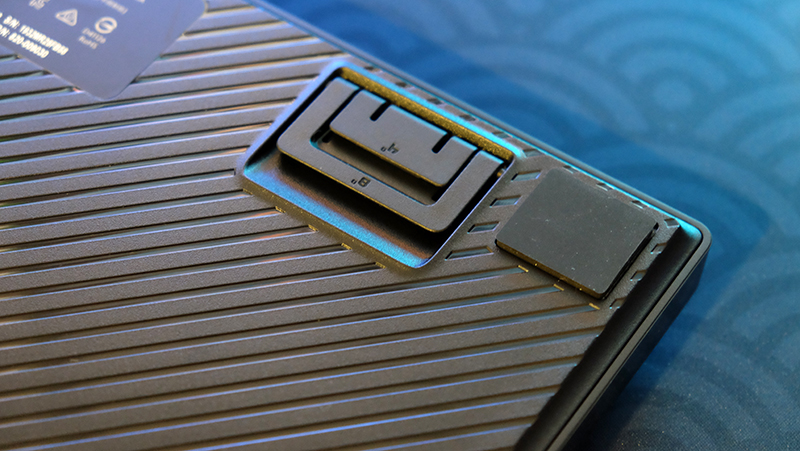 The detachable, braided cable uses a pronged micro-USB connector. This has been a staple for Logitech for a while now, but it's 2019, and I'd really have liked to see USB-C on a gaming keyboard at this price. Micro-USB is notoriously flimsy, and while the additional prongs do help maintain a more secure connection, it's still kind of dated. Razer is already leading the way with USB-C on the Huntsman Tournament Edtion, and Logitech really should have done the same on the Pro X. 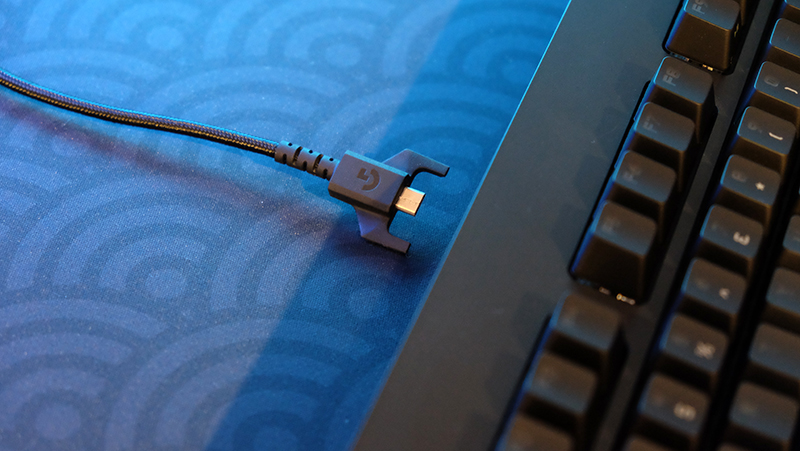 Pluck out those switches

But it's now time to talk about the switches. These are the same GX-series switches that Logitech first introduced on the G512 Carbon, but they now come in more flavours than before. The G Pro X is available with GX Blue, Brown, and Red switches, which are clicky, tactile, and linear switches respectively.

These switches are manufactured by Kailh, and they have the Kailh branding on their housings. In fact, they're actually modified Kailh Blue, Brown, and Red switches. Unlike Logitech's proprietary Romer-G switches, they use the traditional Cherry MX-style stem and rely on a surface-mounted LED that shines through from the rear of the switch. 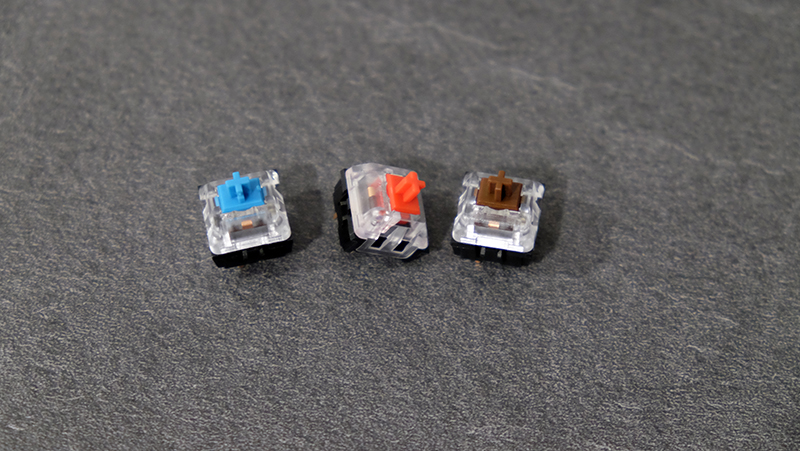 One of the benefits of Romer-G switches was the centralised light pipe, which resulted in more even backlighting. To get around this, the Pro X has legends that are located closer to the top of the keycap, so they sit directly above the LED. The secondary legends are also opaque – it would have been difficult to illuminate them evenly, so it's probably better that they don't need backlighting at all. 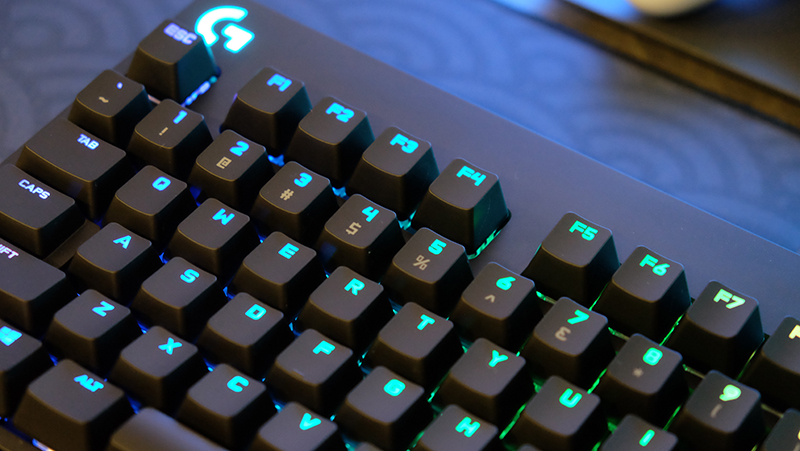 Logitech offers per-key customisations in its G Hub software, and you can also create your own animations on a frame-by-frame basis.

That aside, I'm really glad that Logitech dropped the Romer-G switches on the Pro X. The light pipe was hardly enough to make up for the subpar typing experience, and the Romer-G was generally a mushy, scratchy disaster of a switch. 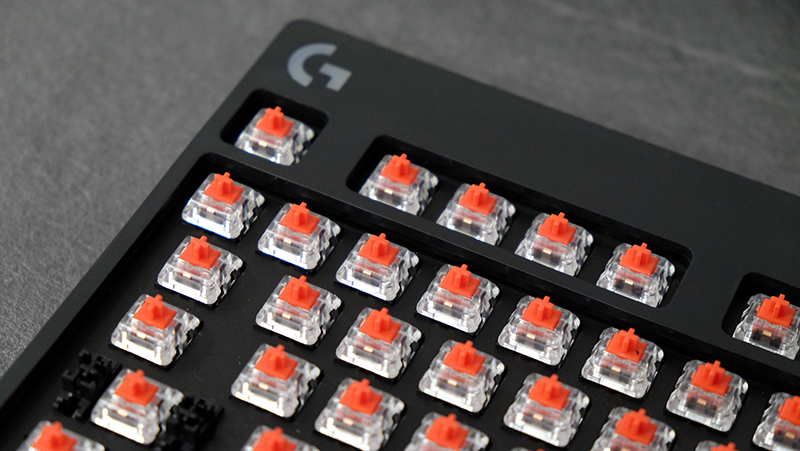 But that's all behind us now and the GX switches are far better. They all have the same 50g actuation force, but I vastly prefer the Brown and Reds over the Blues. That's mostly because the reset point on the Blues is higher than the actuation point, which means you have to release the switch farther before you can register a second key press. This makes the key feel less responsive, and it's not exactly ideal for games that require rapid-fire key presses. This characteristic is not unique to the GX Blues though, and the Kailh Blue switches they're based on are designed this way as well, as are Cherry MX Blues.

That said, the Browns and Reds don't have this issue, and they're also quieter, which I personally prefer.

In terms of tactile switches, the Browns don't actually have a very prominent bump. This is okay if you don't want a super tactile switch, but they can come across as slightly underwhelming if you're looking for more tactile feedback. On the other hand, the Reds do come off as a little scratchy. Smoother switches just feel better and more satisfying to type on, and the Reds leave much to be desired in this area. In fact, that's why certain keyboard enthusiasts like to open up their switches and lube them in order to remove some of that friction.

Then again, the quality of Logitech's offerings don't matter too much since the hot-swappable sockets on the G Pro X means they'll take just about any Cherry MX-style switch. This includes a massive selection of switches from Kailh, Gateron, and even Zeal PC, so you can easily replace the stock GX switches with your favourites. If you're looking to buy your own switches, you can check out ILUMKB, which ships from Singapore, or Australian vendor Daily Clack. There's also NovelKeys, but they're located in the US. 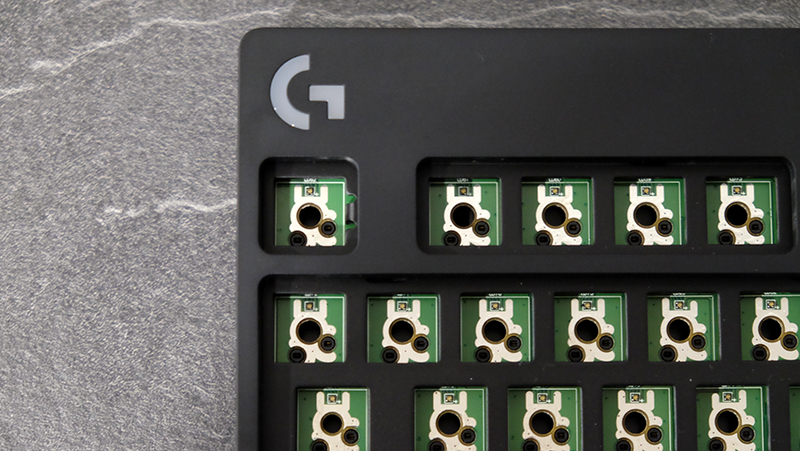 That aside, it's really easy to pluck out the switches, and the included plastic tool works quite well. You just need to be careful not to bend the pins when inserting your new switches. And if you find that a certain key is not working, you've likely just got a bent pin, which can be straightened out quite easily. 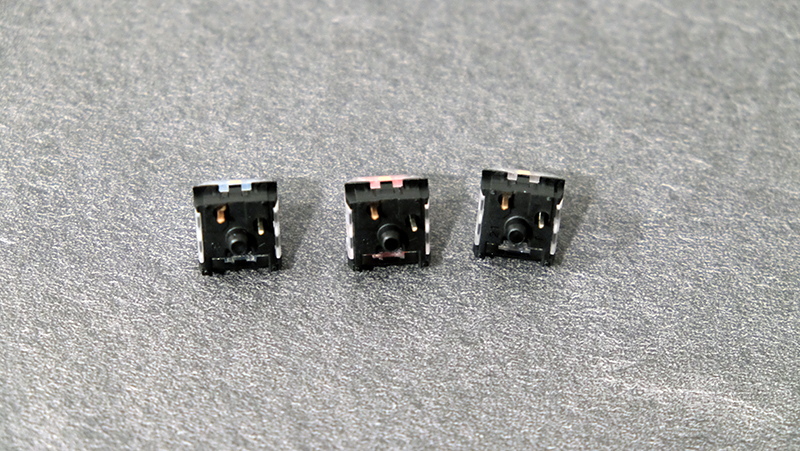 I also want to mention the price for a second. Logitech is selling a 92-switch replacement pack (this leaves you with 5 extra switches) of GX switches at S$79 each, which is a rather steep price on top of the S$229 price tag for the G Pro X keyboard. To be fair, some custom switches are still more expensive, but you can also get 90 Gateron Yellow switches at a mere S$27 from ILUMKB.

Finally, the keycaps are cheaper ABS plastic, which don't feel as good as the PBT keycaps that came with the Huntsman Tournament Edition. They have a soft-touch matte finish, and I'm not sure how well this will hold up over time. Furthermore, unlike the Razer keyboard, the G Pro X also doesn't have a standard bottom row, featuring instead a 6U spacebar and 1.5U CTRL keys. That severely limits your selection of custom keycaps, so if the ABS keycaps decide to wear down, you unfortunately won't have a lot of choices when it comes to replacements. There's also none of that lower-pitched "thock" sound that you get from denser PBT keycaps, so the overall typing experience wasn't as enjoyable for me personally. 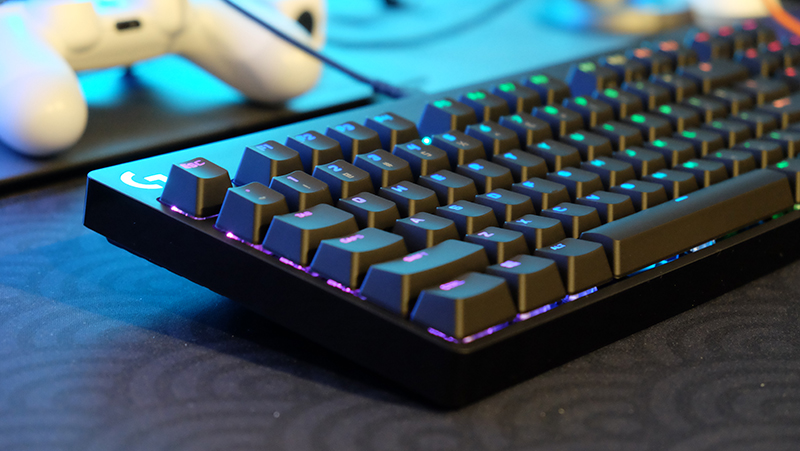 The Logitech G Pro X is a long-awaited update to the company's Pro line, but it unfortunately falls short in several areas. Instead of taking the Pro series forward in a new direction, Logitech has opted to stick with the same dated micro-USB connector and ABS keycaps. It even looks the same as the original G Pro keyboard from 2017.

Its one saving grace is its hot-swappable switches, and Logitech may just be the first mainstream gaming brand to offer this. This opens up a brand new avenue of customisation, but it's also at odds with the non-standard bottom row, which limits the selection of custom keycaps available to you. Ultimately, the G Pro X feels like a missed opportunity for Logitech. It could have been a breath of fresh air and a strong challenger to the Razer Huntsman Tournament Edition – which by the way, has addressed all the issues I mentioned here – but it ends up falling short because of Logitech's conservative approach.

At S$229, it's difficult to recommend it over the Razer keyboard, unless you really want to be able to swap out your switches. Furthermore, if you're an enthusiast that wants the hot-swap feature, you're more likely to be looking at custom boards than something like the G Pro X. At the most, I could maybe see the G Pro X being something of a stepping stone for someone curious to try out different switch types, and the world of custom mechanical keyboards.

The G Pro X is not a bad keyboard in and of itself. It's just that the competition has raced ahead of it and it has some serious catching up to do.