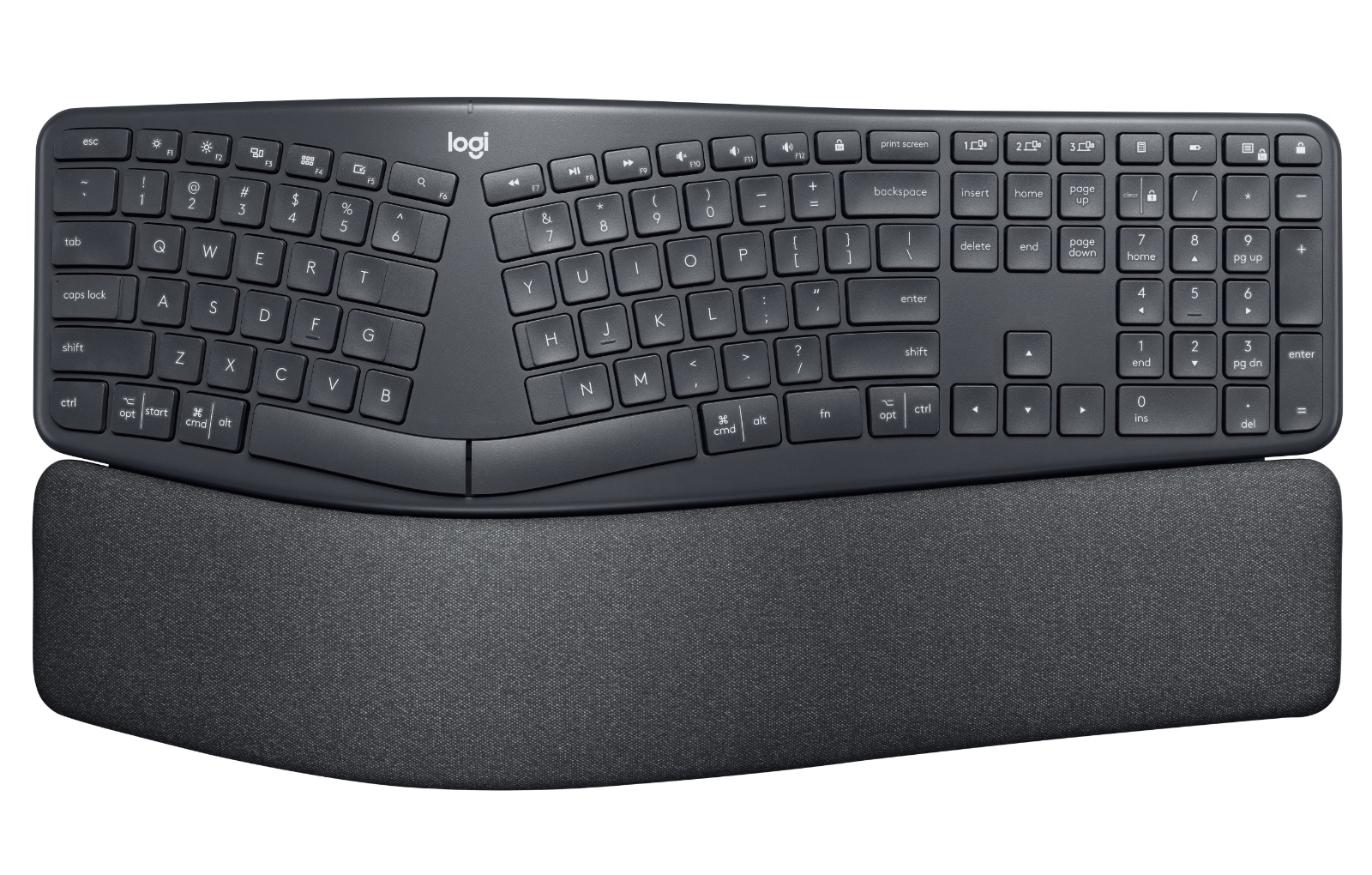 I've never used to really care about the type of keyboard I use. Whether it’s small like the Magic Keyboard from Apple or my regular Logitech MX Keys, they are just accessories and tools to do what I need to do.

But I’ve gotten older, the aches and pains have become more pronounced. Spend a weekend gaming in Azeroth and I’ll be spending Monday massaging my shoulders.

This is where the ergonomically friendly Logitech Ergo K860 modern keyboard comes in. 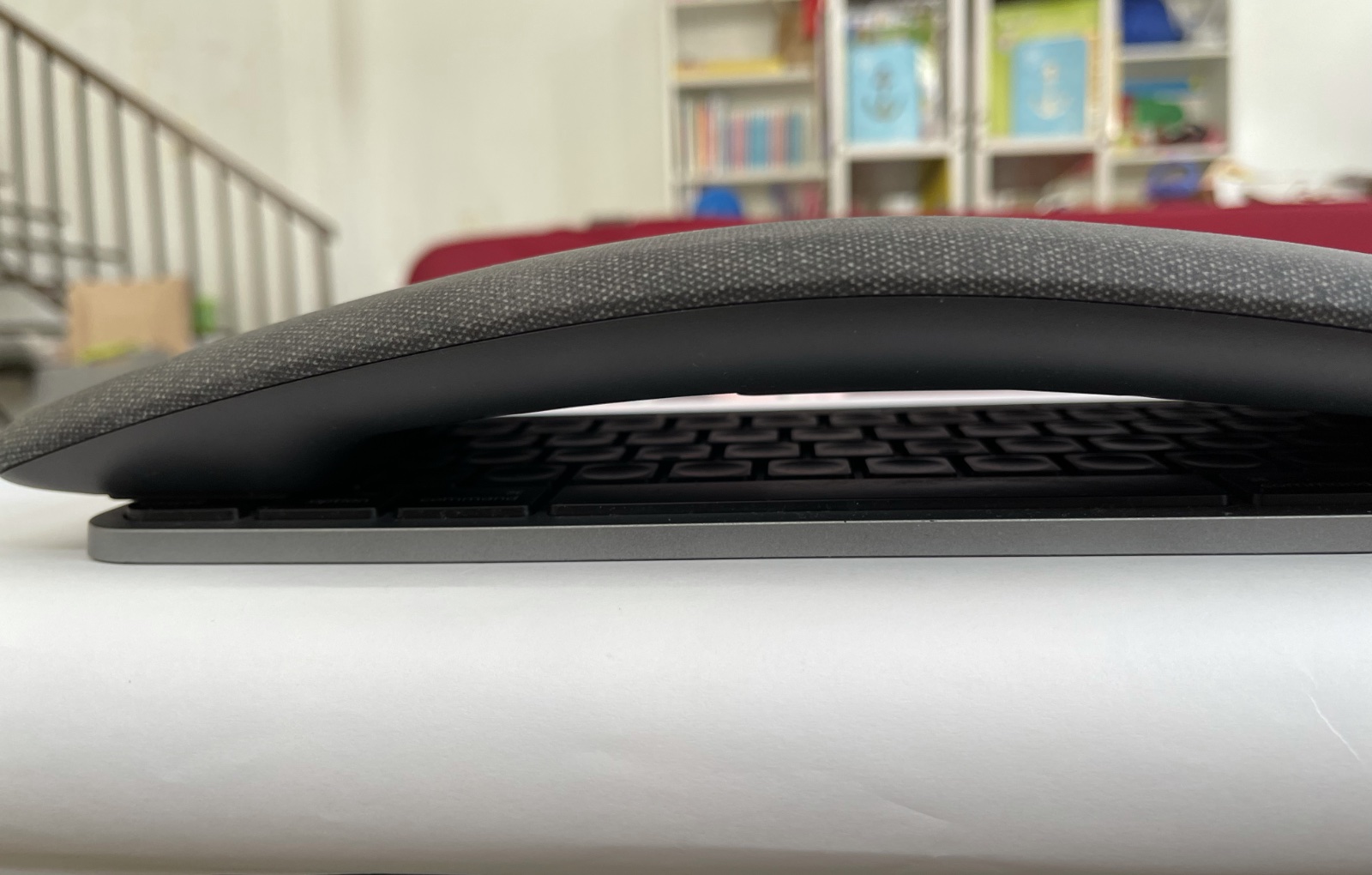 According to the company, the K860’s curved design places your hands, wrists, fingers and forearms in a more natural posture and has even been proven to reduce muscle activity by 21% in the back compared to a traditional keyboard. This is definitely not just marketing speak, but there is some science to back it up as we've covered in our previous ergonomic keyboard review. Here's a small excerpt from it:-

The natural position of your forearm and wrist is closer to what you would adopt for a hand shake, which means that the flat position we adopt when typing on traditional keyboards isn't the best.

Now you know why your hand aches after prolonged periods of typing. Heck, this also applies to mice, which is why Logitech has products like the MX Ergo and MX Vertical mice to pair with their ergonomic keyboards.

Getting familiar with the Logitech Ergo K860 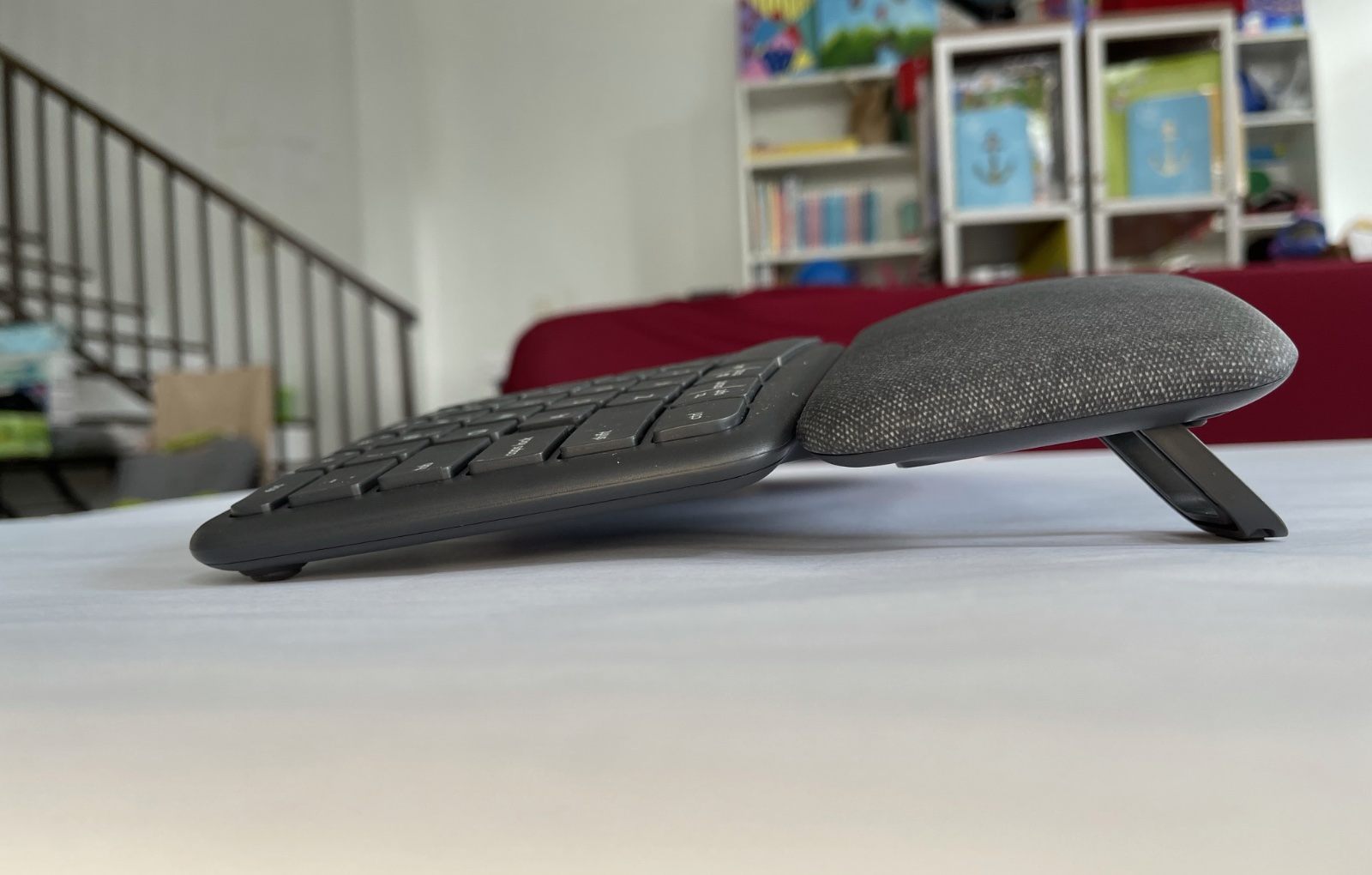 The Ergo K860 is a wireless, full-sized ergonomic keyboard with a large integrated wrist rest that adds up to a third more to the size of the product.

Logitech paid a lot of attention to the wrist rest. It consists of three distinct layers. On the top is a knitted stain-resistant fabric layer, and underneath it is a 2mm-thick foam layer and another 4mm-thick memory foam layer. It also has built-in stands that tilt the keyboard at a reverse angle. 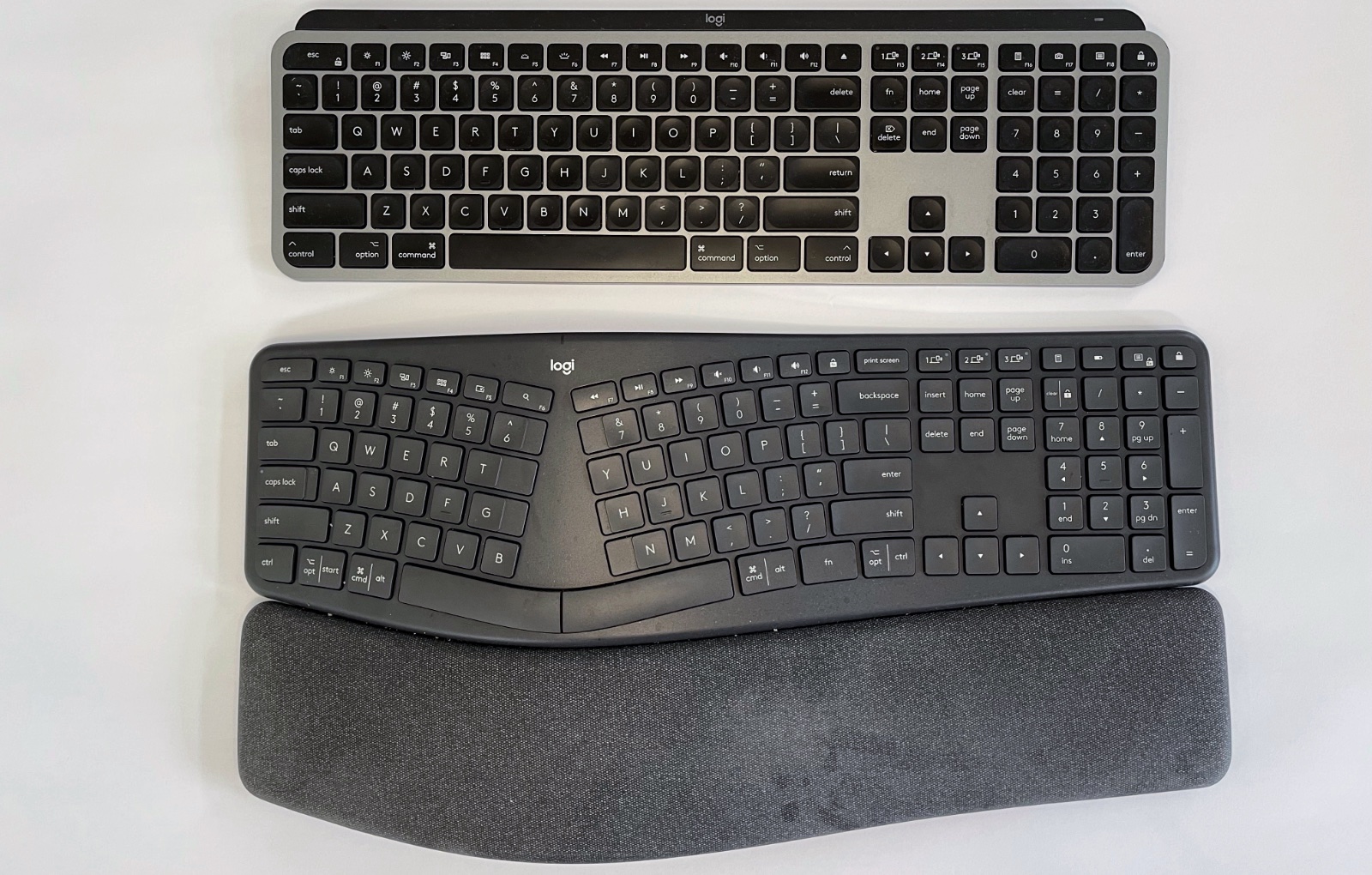 That said, the size of the keyboard can be an issue for some. It's only slightly wider than your typical full-sized keyboard but the wrist rest adds a lot of depth. Most keyboards are about 13cm to 15cm front to back, but because of the wrist rest, the Ergo K860 measures a whopping 23.3cm. Make sure you have a deep enough working space.

The wrist rest is a bit of a hit and miss for me. While it certainly feels nice and comfy, I can't get over the fact that it adds so much size to the keyboard. I find it most useful if I'm standing or using it from an elevated position (i.e. with the keyboard positioned lower). But with the K860 keyboard flat on my desk, I found that it was less helpful and I wished there was a way I could remove the wrist rest from the keyboard and reclaim the space it was taking up. 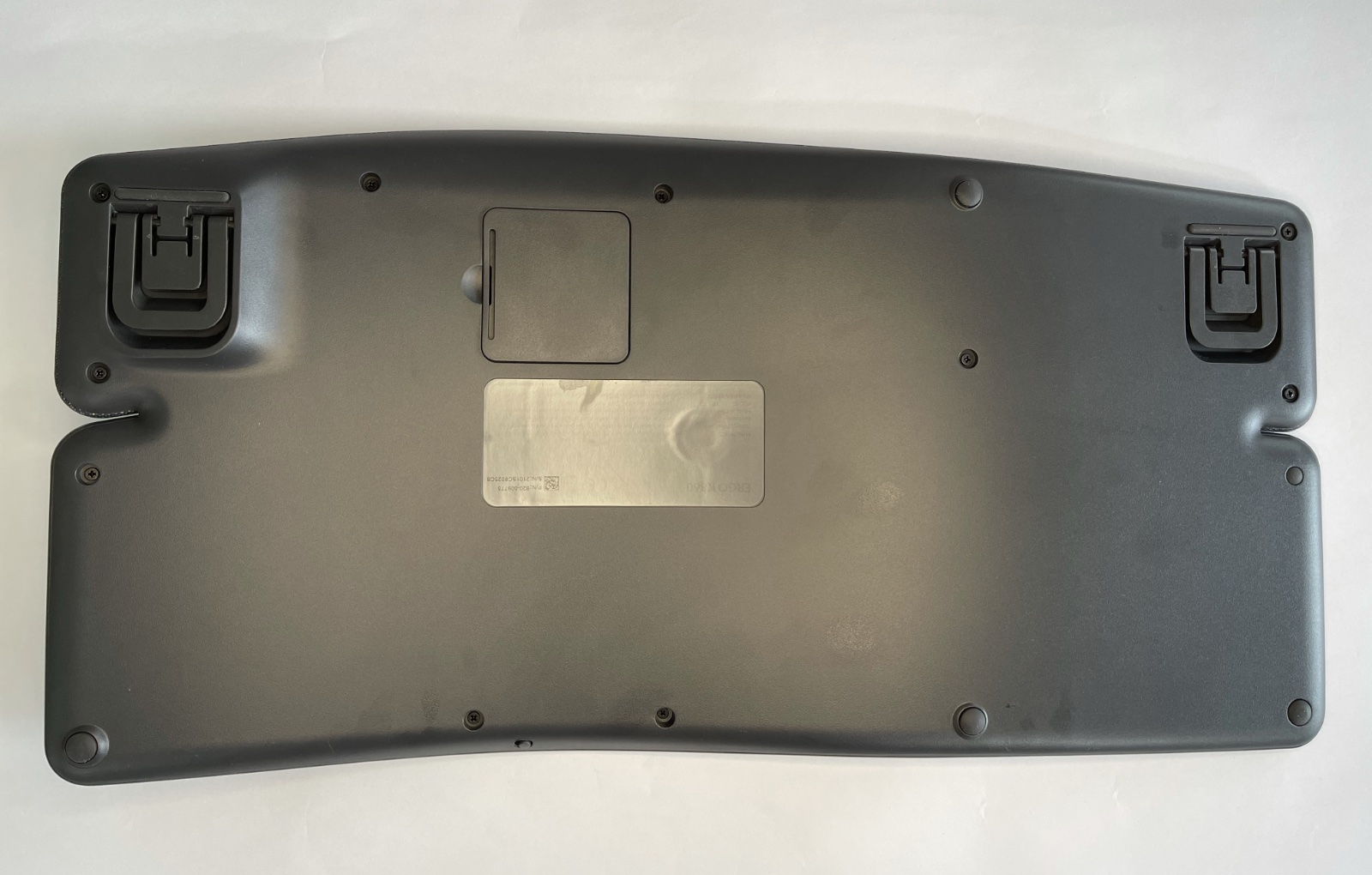 Since it's an ergonomic keyboard, there's a split in the middle of the alpha keys. This design supposedly reduces strain on your wrist. And unless you are someone who has been using ergonomic keyboards, this split in the keyboard will need some getting used to. As someone who never formally learnt how to touch type, I had to relearn how to best place my fingers, so I’d cut down on mistakes. But once I did, I could type on the Ergo K860 confidently. 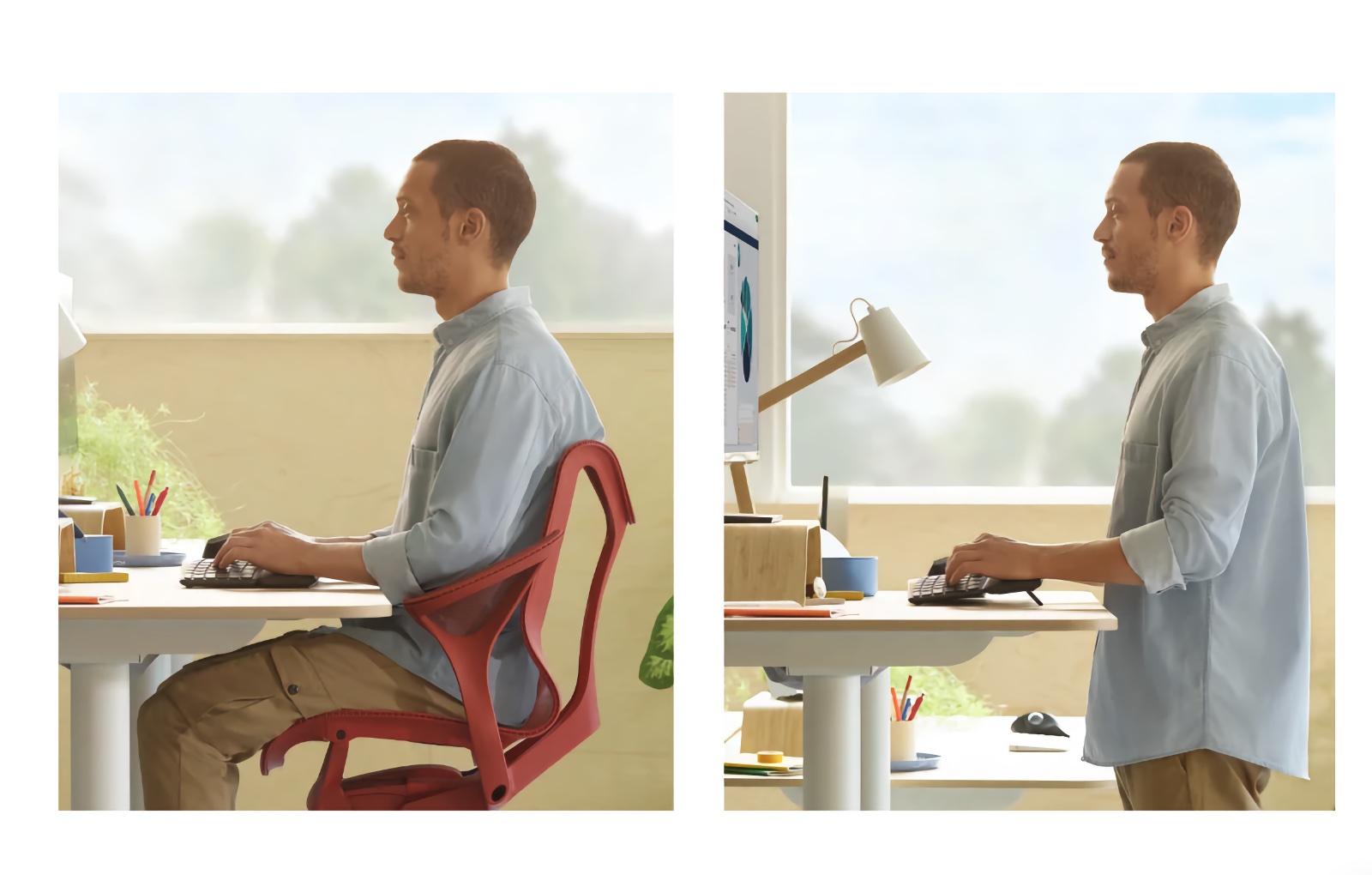 As for solving arm and shoulder aches, I have to say that I didn’t really notice any strains after switching over to the Ergo K860. Also, I wasn’t actively trying to keep myself upright or hold a good posture. Whether or not it helps in the long run is something I’ll have to keep an eye on. 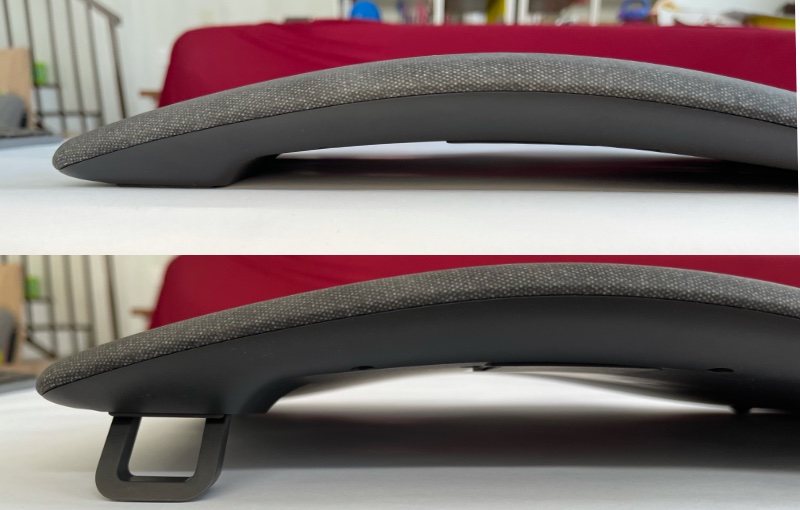 The Ergo K860 doesn't use mechanical switches. Instead, it uses rubber domes. These are typically associated with an inferior typing feel but it's certainly not the case with this keyboard. The keys have sufficient tactility and the overall action is best described as plosive and smooth. It also helps that the keycaps are gently sculpted to help guide your fingers. Insofar as typing is concerned, my only major complaint is that the keys aren’t illuminated. I work into the night at times and having a backlit keyboard really helps. 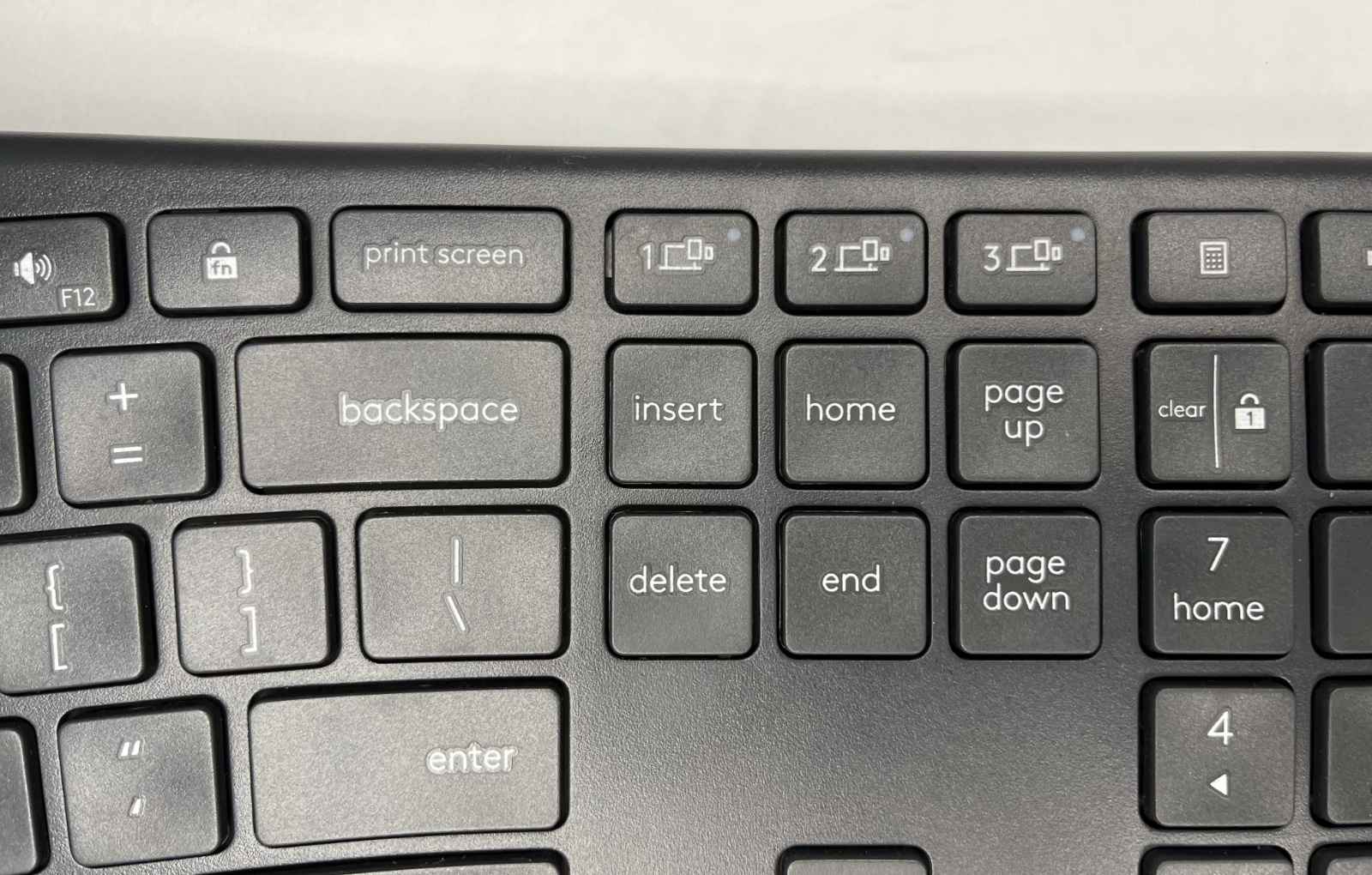 You can connect the Ergo K860 via Bluetooth or the included USB receiver to up to three Mac or Windows devices and switch between them easily. The keyboard even has the dedicated OS keys needed for each OS to work properly. Logitech says that the keyboard will stay powered for up to two years using AAA batteries. I guess we’ll update this in two years if this holds true. 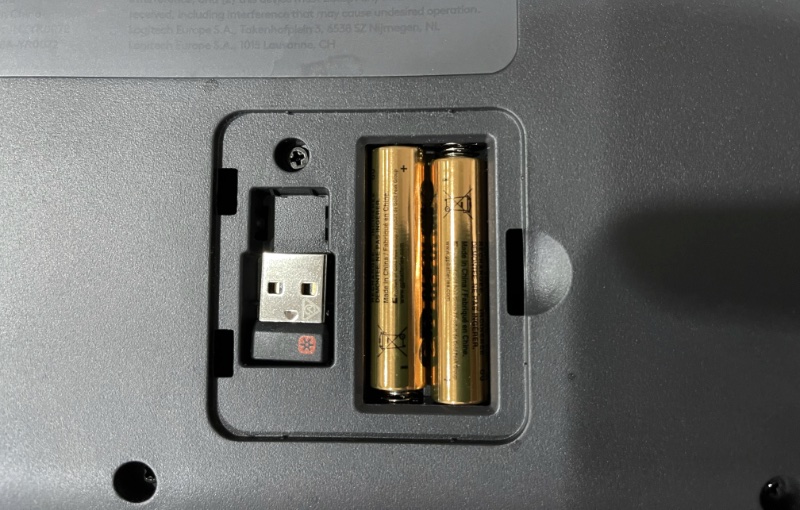 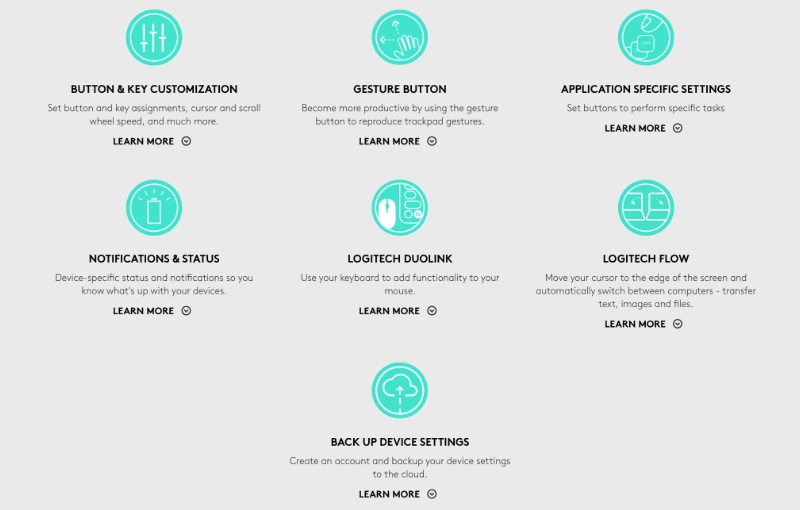 The Ergo K860 also works with Logitech's Options app. Apart from showing you the remaining battery life, the Options app lets you customise keys such as the function keys and also enables some really cool features. The highlight of which is arguably Flow, which lets you seamlessly use the keyboard with up to three systems if you also have a Flow-enabled mouse like the MX Master 3. Yes, you can switch between devices with the Ergo K860's dedicated keys, but Flow does it automatically whenever you mouse over with a Flow-enabled mouse. Flow also lets you copy and paste text and transfer files between computers, which can be invaluable if you often work with multiple systems. 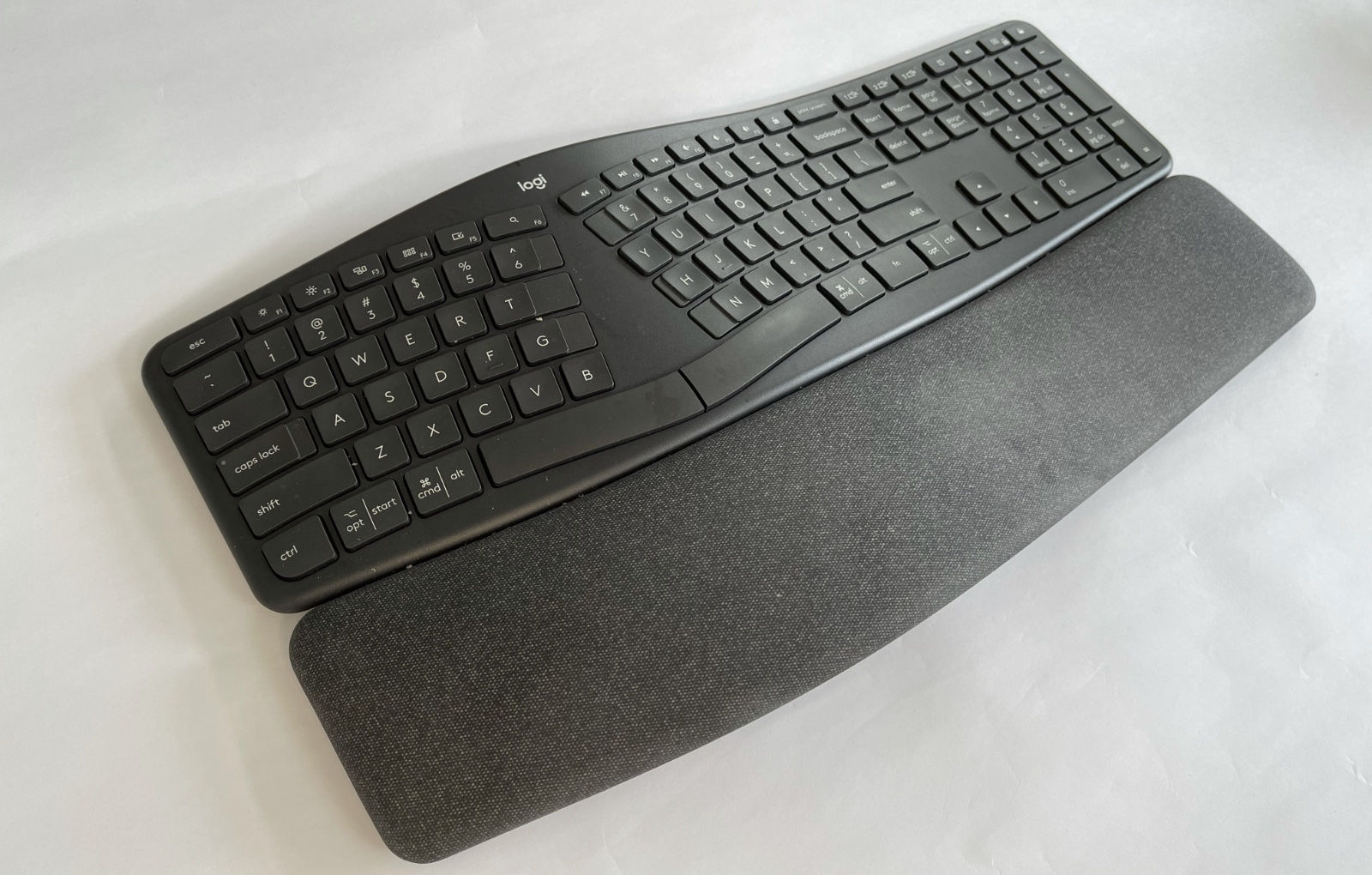 At S$199, the Logitech Ergo K860 is a rather pricey keyboard when you consider it’s missing some features like built-in batteries and backlights. It might be cheaper than esoteric options like the US$339 Zergotech Freedom, but it definitely appears expensive in light of cheaper alternatives from Microsoft. The Ergonomic Keyboard is just S$90 while its Sculpt Ergonomic Desktop keyboard is S$159.

However, Microsoft’s options have some glaring shortcomings of their own. The Ergonomic Keyboard’s low price is justified by its humongous size (nearly 50cm wide) and the lack of wireless connectivity and backlights. The best way to think of it is as a gateway to ergonomic keyboards. 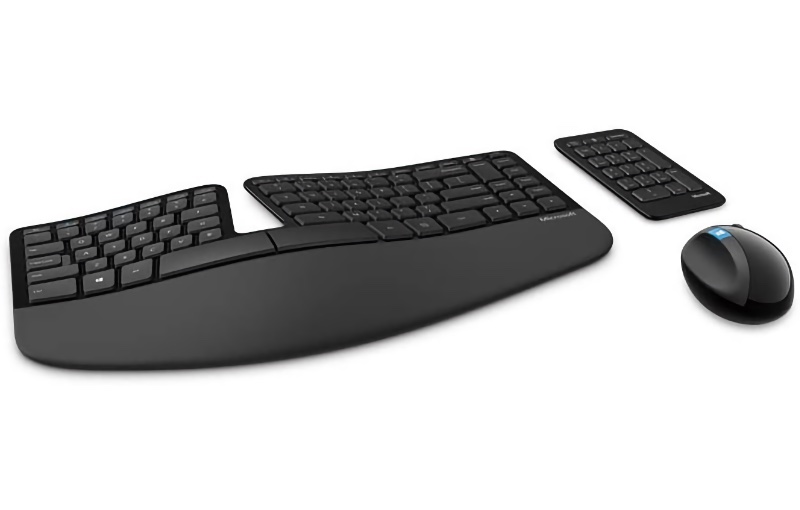 The Sculpt Ergonomic Desktop keyboard looks like good value when you consider it comes with a dedicated numpad and ergonomic mouse, and it’s a wireless system. It also has a more pronounced split that some users might like. But annoyingly, all components (keyboard, numpad, and mouse) require separate batteries. Also, the keyboard and numpad lack backlights and cannot connect to multiple devices like the Ergo K860 can.

In light of these, the Logitech Ergo K860 shines with its ability to connect to and quickly switch between multiple systems. Also, compared to my usual MX Keys keyboard, I haven't noticed as many shoulder aches from prolonged gaming sessions or felt the need to stretch extensively after a day of work typing.

Overall, I found that apart from its large footprint and lack of backlighting, there is a lot to like about the Ergo K860 keyboard. I found the split design and keys to be easy to get used to and comfortable to use. The wrist rest with its soft padding and integrated stands is particularly useful if you like to work standing. On top of that, the keys themselves are also nice to type on because of their tactile feel. And, the keyboard has useful and interesting features like Flow, customisable keys, and great battery life.

All in all, the Logitech Ergo K860 is worth a shot if you often find yourself with aches and pains from prolonged typing. Just make sure you have the desk space for it.

You can find the Logitech Ergo K860 keyboard on the Shopee Logitech Official Store.

Write a Review
Can pair with up to 3 devices
Two-year long battery life
Support for Logitech Flow
Customisable keys
Easy to use with both Windows and macOS devices
No backlit illumination
Needs a lot of space to be used
No built-in battery
Our articles may contain affiliate links. If you buy through these links, we may earn a small commission.
Sponsored Links