AC-3200 and AC-2400 are the two latest buzzwords in the consumer networking space. If you are unfamiliar with these two terms, we suggest you check out our guide to wireless 802.11ac networking here. There are a lot of differences between the two and it is necessary to understand them first.

But to recap briefly, AC-3200 class routers are typically tri-band routers that broadcast two separate 5GHz networks and a single 2.4GHz network. The total theoretical data transfer rate of 3200Mbps is derived from the maximum 1300Mbps data transfer rate of each 5GHz network and 600Mbps on the 2.4GHz network - 1300Mbps + 1300Mbps + 600Mbps = 3200Mbps. The idea of such routers is to split fast and slow devices between the two independent 5GHz networks. Also, unlike AC-2400 routers, any existing device that supports Wireless-AC will be able to take full advantage of the speed and bandwidth of the AC-3200 routers. Nevertheless, AC-2400 routers are potentially still tops in terms of outright speed since they offer up to 1733Mbps of throughput on their 5GHz band, assuming you have a fully compatible 4x4 client. 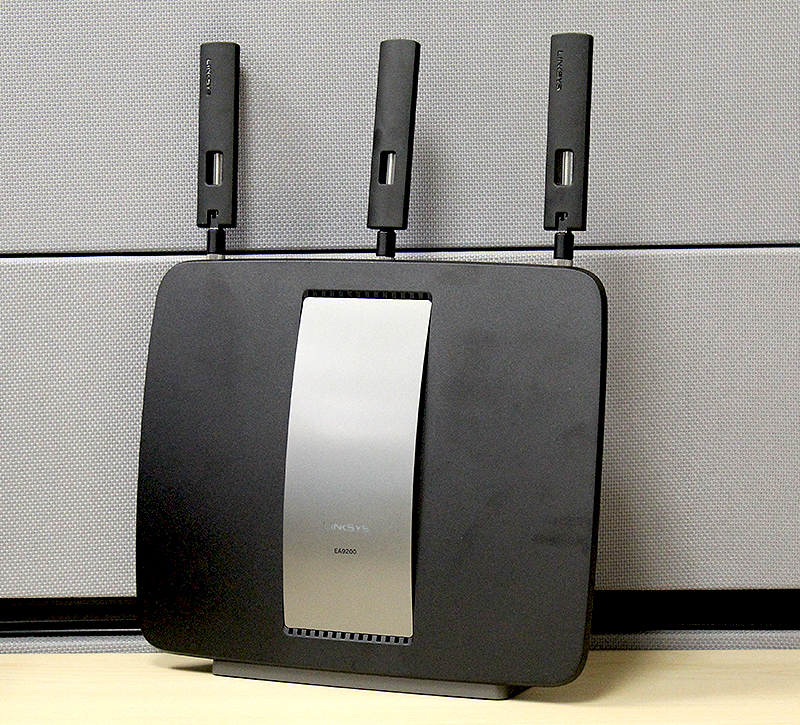 Since these two classes are routers represent the zenith of home networking, Linksys has saw fit to follow up on the earlier AC-2400 E8350 router with the new EA9200 Tri-band Smart Wi-Fi router. The previously reviewed E8350 was disappointing in terms of performance and lacked features that should be in a high-end router. Fortunately, Linksys assured us this would not be the case with the EA9200 router as it is classed as one of Linksys' Smart Wi-Fi routers, meaning the full suite of capabilities that Linksys currently offer on their routers.

The first thing that most users would notice about the Linksys EA9200 router is that it only has three antennas, which is unusual considering most AC-3200 routers have six - the Netgear Nighthawk X6 and the ASUS RT-AC3200 both have six antennas. To be sure, the Linksys EA9200 router does have six antennas, just that three of them are hidden internally. According to Linksys, the decision to do so was to give the EA9200 router a less busy appearance, plus they were certain that performance would not be compromised.

Unlike most modern high-end routers, the Linksys EA9200 router is actually quite compact and is designed with a stand so that it sits vertically - wall-mounting is not possible. As a result, it does not take up much desktop real estate, though it sits very tall, at around 30cm including its antennas, so make sure you have headroom. In terms of design, the EA9200 router is rather simplistic. Unlike its rivals ASUS and Netgear, whose routers are highly angular and almost aggressive looking, the Linksys EA9200 router looks much more subdued and conservative The front panel is a bare black with a silver panel down the middle with the Linksys’ logo that lights up when the router is turned on, while the sides and rear panels are highly perforated and vented to let heat escape.

Like its E8350 sibling, the EA9200 router does not have LED status indicators on front, which can be problematic if something goes wrong and you are trying to troubleshoot. There are however LED indicators on the WAN and LAN ports and even for the USB ports, but since these are on the back of the router, their helpfulness is limited. 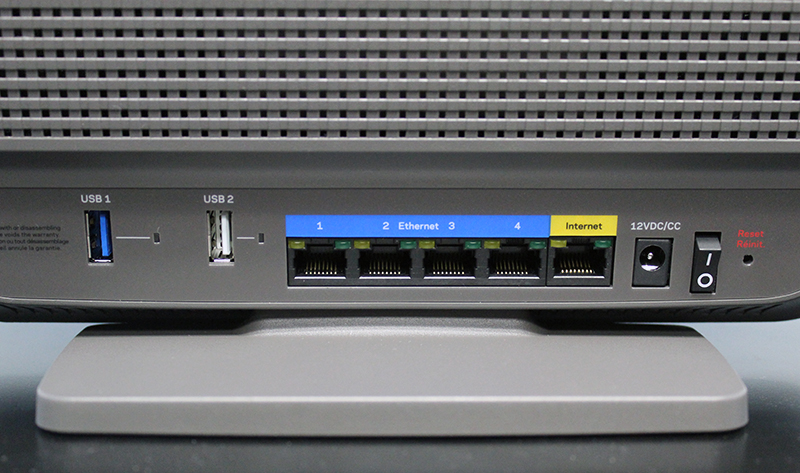 Behind the router, users can find the usual assortment of ports. There is a single Gigabit WAN port and four Gigabit LAN ports, and also a USB 3.0 port and a USB 2.0 port. And looking to the left (relative to the back of the router), we find two buttons - one for WPS setup and another for turning off Wi-Fi.

Inside, the Linksys EA9200 router is powered by Broadcom’s 5 XStream chipset - the same as Netgear’s Nighthawk X6 router. This chipset consists of a single dual-core Broadcom BCM4709 chip running at 1GHz with 256MB of RAM and three offload Broadcom BCM43602 processors, each dedicated to one of the EA9200’s three Wi-Fi networks. This offload processor handles all wireless processing thus freeing the the host CPU for other applications.

Setting the Linksys EA9200 router up was a breeze as the Smart Wi-Fi user interface is arguably the most user-friendly setup interface around. It offers a good balance of ease of use and control, and offers features such as traffic monitoring, QoS, parental control, cloud storage and more. Clearly, a lot of thought has gone into its design. An example would be Linksys’ QoS management system, which gives users the option to prioritize connections based on devices as opposed to simply just specifying applications and the ports they use. This is both easier and considerably more practical for most users. 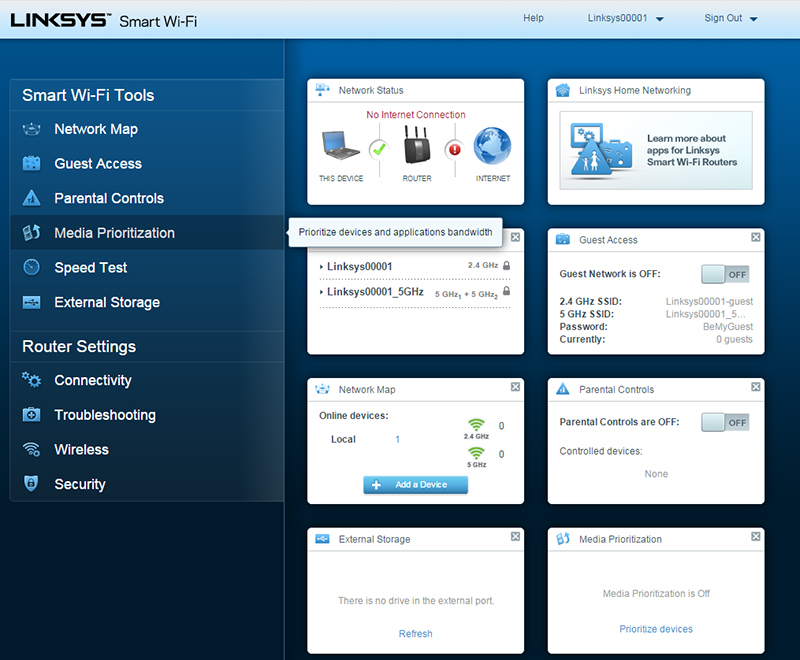 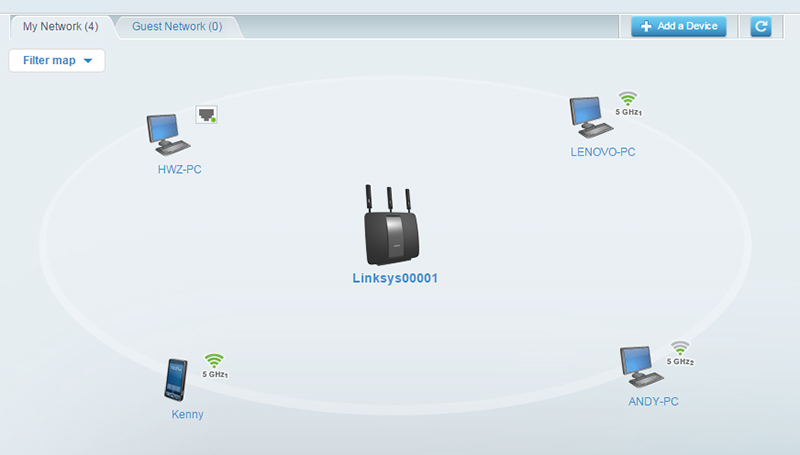 The EA9200 router also features Smart Connect, which is a feature that pertains to the router’s dual 5GHz frequency bands. If enabled, the router will use “5GHz band steering”, which means that it will broadcast a single 5GHz SSID, but devices connected to it will actually be split between its two 5GHz bands to spread the load and reduce congestion. This all takes place automatically and the router will assign devices on its own. However, for users who want more control, the EA9200 router can also be setup to broadcast two separate 5GHz SSIDs. 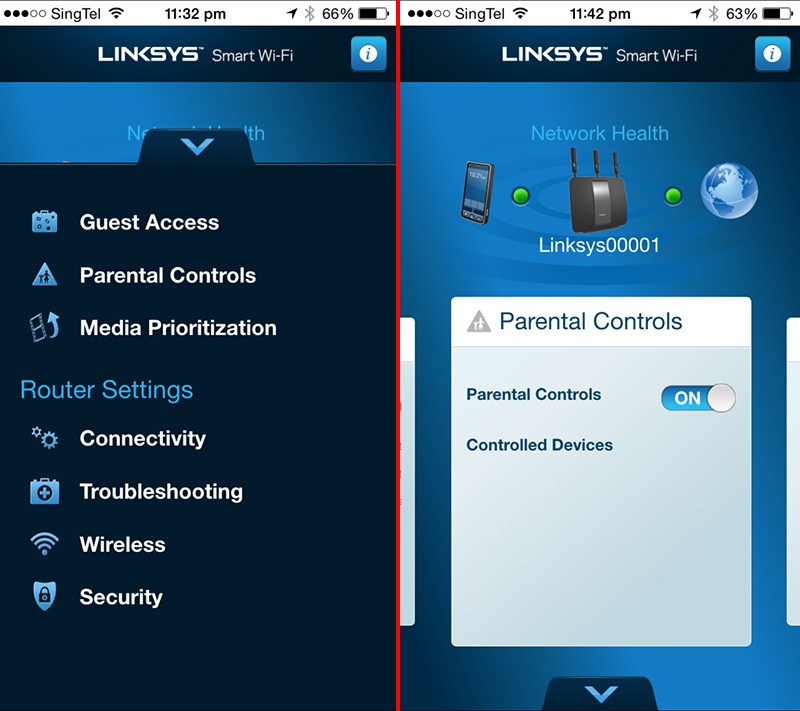 Write a Review
Compare This | Specifications
Reserved design with only 3 external antennas
Ideal for many devices
Linksys Smart Wi-Fi interface
Remote router management
Cloud storage functionality
Only vertical standing
Inconsistent performance at extended ranges
Pricey but justifiable
Our articles may contain affiliate links. If you buy through these links, we may earn a small commission.
Sponsored Links