An important thing to note is that we will be steadily phasing out 2.4GHz testing from our benchmarks. For one, 802.11ac is now being widely supported by most if not all mobile devices. If your device supports 802.11ac, it makes absolutely no sense to connect to the router via the slower and more congested 2.4GHz band. Speaking of congestion, our test environment currently has no less than 19 different 2.4GHz networks being broadcasted. The amount of noise and interference makes it very difficult for us to properly evaluate 2.4GHz performance. As such, we'll only be presenting performance from the 5GHz band.

Since MU-MIMO only works with clients with compatible MU-MIMO adapters, we are including additional tests using three specially prepared notebooks outfitted with Qualcomm’s QCA9377 1x1 MU-MIMO adapter (single stream and up to 433Mbps). We will first test transfers speeds using a single notebook and then with two and finally all three notebooks simultaneously. If MU-MIMO works as advertised then what we should see is that transfer speeds should not differ greatly whether the router is transmitting to only a single device or three. Since the Linksys EA8500 router supports up to four spatial streams, it has more than sufficient bandwidth for these three notebooks and their single stream Wi-Fi adapters. But of course, this is all theory. As we all know, networking performance in practice is often far from theoretical ideal - the environment and positioning of the notebooks can all affect performance. For this test, we placed the three notebooks at a range of about 2m in front of the router and in a fan shape, to keep the distance of the notebooks from the router equidistant.

The Linksys EA8500’s results on LAN Speed Test were very encouraging and we saw a marked improvement over the older Linksys E8350 router. Uplink speeds were generally very high and also comparable against the current crop of high-end routers. Performance dipped quite considerably at our longest test range of 17m, but that’s in keeping with other routers as well so there’s no need to be alarmed.

Downlink speeds were good too, but not as strong as consistent as some other routers here. For example, its performance at 5m was a little underwhelming. At 5m, the Linksys EA9200 and WRT1900AC routers outperformed the EA8500 router by 10% to 20%, which is significant. At 17m, the Linksys WRT1900AC router was faster by around 19%.

File transfer speeds were generally quite impressive, especially at closer ranges. However, speeds dropped quite steeply when we got up to 17m. We calculated a performance drop of around 35%, which was one of the highest amongst the router.

In our performance load test, where we downloaded data simultaneously using two notebooks from our host computer, the Linksys EA8500 managed a speed of 72.73Mbps, which was about the same as the other dual-band routers that we see here. Bear in mind that our notebooks were not MU-MIMO compatible, we are not expecting to see any boost in performance. Obviously, it was no match for tri-band routers, which could dedicate individual 5GHz networks to the two notebooks.

As we expected, there was hardly any difference in performance when there was only a single client on the network. With two clients simultaneously downloading data, we can see that although performance took a serious dip, it could have been worse if we had not enabled MU-MIMO. Performance with MU-MIMO enabled is up by around 35%. Even though this was far from ideal, it still marks a significant improvement in performance. With three client devices, we saw performance drop even further. But again, greater speeds were achieved when MU-MIMO was enabled - up to 24%, which is again a considerable amount.

To jump on the MU-MIMO bandwagon or not?

Who would have thought that you could use the word “exciting” and “exhilarating” to describe routers? But that’s exactly the case with Linksys’ new EA8500 router. Even though the Linksys EA8500 might not look like much, it is one of the most important routers to hit the stands in a long time thanks to its support for MU-MIMO. While 802.11ac helped double theoretical data transfer rates, MU-MIMO has the potential to have the same impact by significantly improving the way in which routers communicate to its connected clients.

Looking at the performance figures here, there’s no doubting that the Linksys EA8500 is one speedy router. While performance was generally good, we found its downlink speeds to be a bit shaky and inconsistent when compared to other routers of similar standing. Its performance at our extreme test range of 17m was also not as strong as other routers. As for MU-MIMO, it did deliver some boost in performance, but they were not as great as we had hoped. Still, the 20% to 35% bump in performance that we saw is certainly substantial and should not be scoffed at, especially in our noisy test environment.

Excellent performance aside, we also applaud Linksys for its robust and easy to use Smart Wi-Fi user interface and software. We mentioned this many times before, but its worth repeating here that the Smart Wi-Fi interface is arguably the most considered and user-friendly router setup interface in the market. User-friendliness aside, it also has a wealth of useful features including remote management, basic cloud storage functionality and more.

At S$399, the Linksys EA8500 is a pricey router, and it matches other premium high-end routers from competitors like the ASUS RT-AC87U and the D-Link DIR-890L, just to name a few. It is also identically priced to another high-end Linksys router, the EA9200. The two are fine routers that offer very high levels of performance and because both support Linksys Smart Wi-Fi, they have identical features too. To decide on which high-end router is right for you, the question to consider is if should you buy into MU-MIMO technology now. 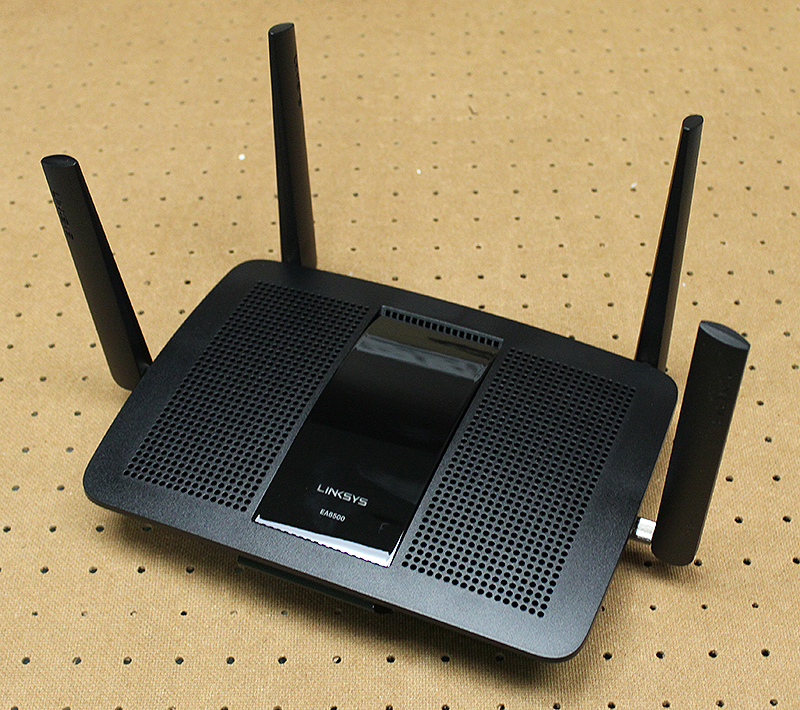 The biggest problem with recommending the EA8500 router is that the advantage of MU-MIMO can only be fully realized with the right compatible devices. And as of today, there aren’t many of these around. As a result, you probably won’t be able to maximize the full performance capability of the EA8500 with the devices you have right now. However, according to reports and people we spoke to, there should be no doubt that we will see more devices supporting MU-MIMO in the very near future. In that case, the EA8500 router can be regarded as the future-proofing route.

As for the EA9200 router, it features technology that works right here and now, and it is pretty effective to boot. Furthermore with its additional third network, it certainly has much better capacity, in comparison to regular dual-band routers, to handle the needs of today’s increasing connected homes.

If you already have an AC2400-class router, then there’s no real need to upgrade at all as AC2400 routers will support MU-MIMO at some point, pending firmware updates from their respective manufacturers. One advantage the Linksys EA8500 has over these routers is faster performance on the 2.4GHz network over the older 802.11n standard - which isn’t really worth the trouble since there’s hardly any device out there which can maximize the full 800Mbps capability of the EA8500’s 2.4GHz band.

To sum up, the Linksys EA8500 represents the very cutting-edge of wireless technology and comes highly recommended for enthusiasts who demand the latest and the very best. For others, the Linksys EA8500 is still worthy of consideration, but don’t forget that there are also AC3200 class routers out there can also significantly and immediately help improve your wireless performance especially if you have many connected devices.