LG V30+ review: More feature-packed than ever and with a stunning new makeover

Despite being released quite late in the year, and the V20 being the first phone to launch Android 7.0 Nougat, the V30+ is unfortunately still running on Android 7.1.2 Nougat, and according to LG, an Android 8.0 Oreo update won't be available until late January/early February next year.

LG has also heavily skinned Android with its UX 6.0 UI, which removes Android's standard app drawer in favor of an iOS style app-filled homescreen. Fortunately, you can restore the app drawer by going to Settings > Home Screen > Select Home > and picking Home & app drawer. LG has also reskinned the icons themselves to look more like iOS icons with rounded square backgrounds applied to every app. This isn't really a problem except with Google's default apps like Chrome and the Play Store, because these can't be skinned to follow LG's re-design, so they just look like folders with the app icon sitting on a grey square background. Even the app folders use an iOS-style full-screen display rather than Android's superior in-place folder popup. Personally, I wish LG would just lay off the skinning because Google's Material Design philosophy looks great, so why go to such lengths to make your phone look more like iOS? 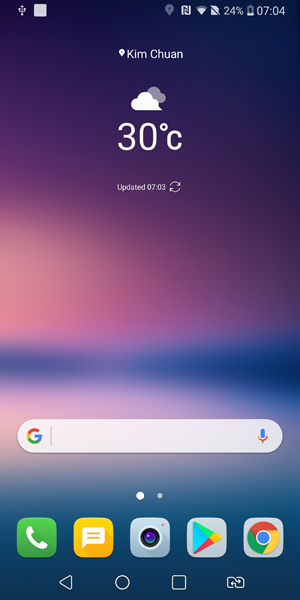 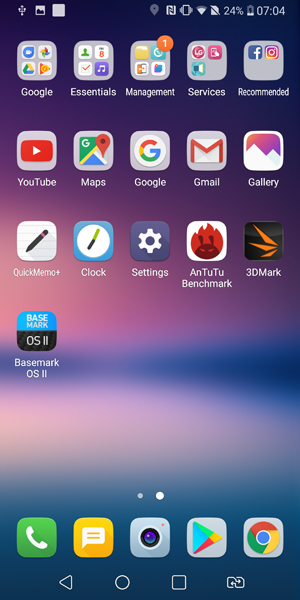 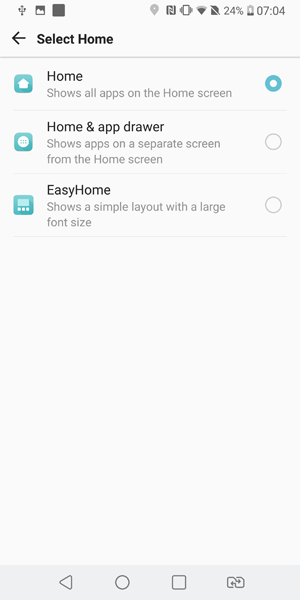 The most notable new addition to UX 6.0 is a new Floating Bar option that acts as a virtual replacement for the V10 and V20's second screen, offering up similar functionality as a place for shortcuts and controls. It lives on the edge of the screen and you can move it anywhere you want, tapping it to show app shortcuts, a set of screen capture tools, contacts, and music controls. Like the secondary screen on the V20, I didn't find it to be particularly useful, and it was more distracting than helpful, so I ended up turning it off entirely. Your mileage may vary though, so give it a try. 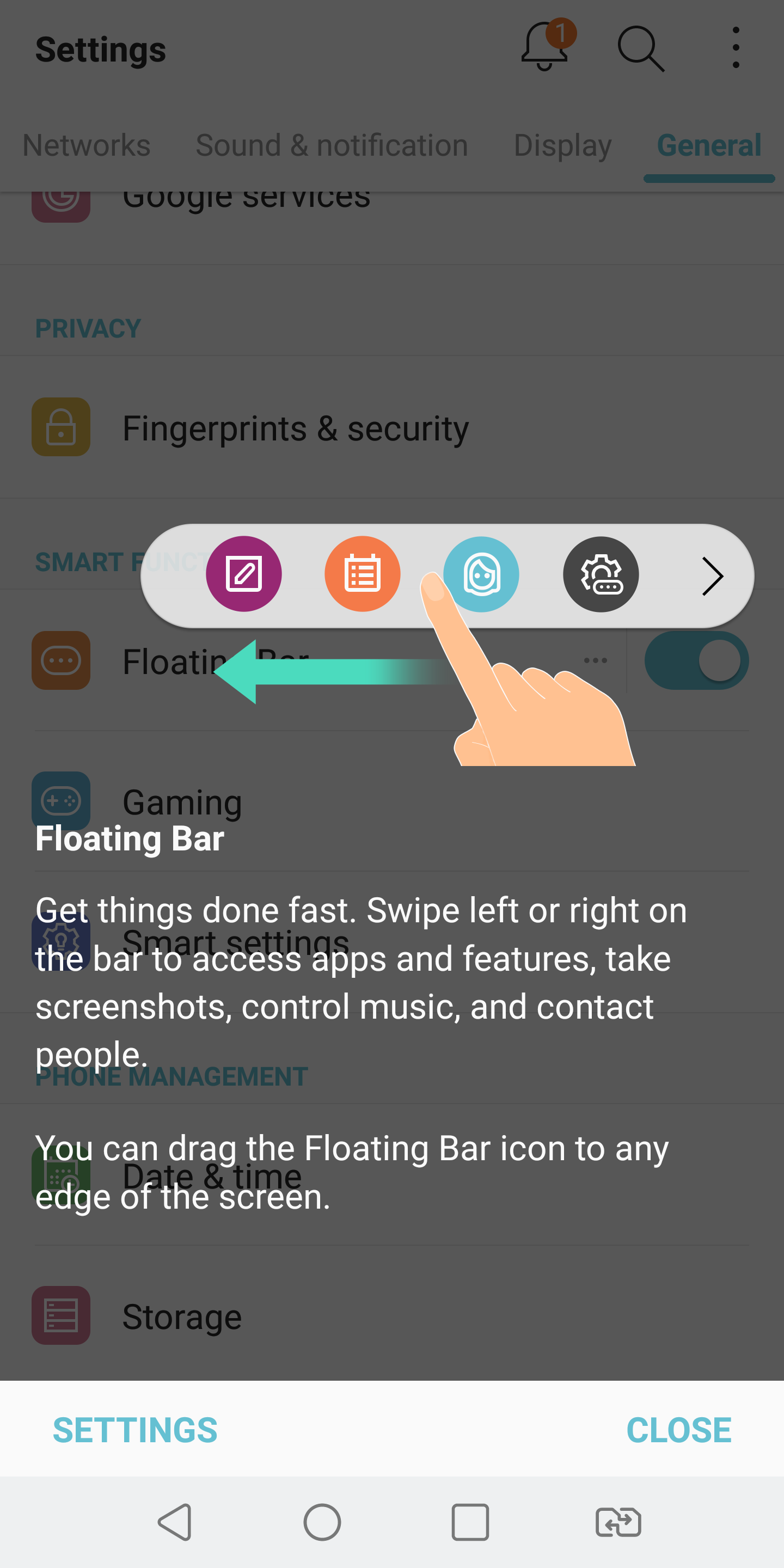 There's also some new settings for the always-on display. You can select different clock styles, and there's also the option to display your signature (or rather some custom text in a squiggly handwriting font). There's even an option to display a color photo from your image gallery (or you can select from a range of full color stock images). In another effort to replace the second screen, swiping the top of the always-on display will display a useful set of quick controls that will let you turn on or off the Wi-Fi, flashlight, Bluetooth or launch the camera. Unfortunately, you can't customize these. 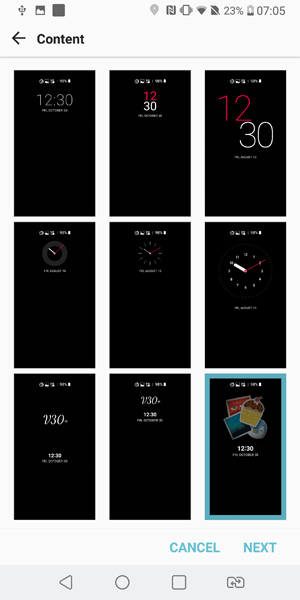 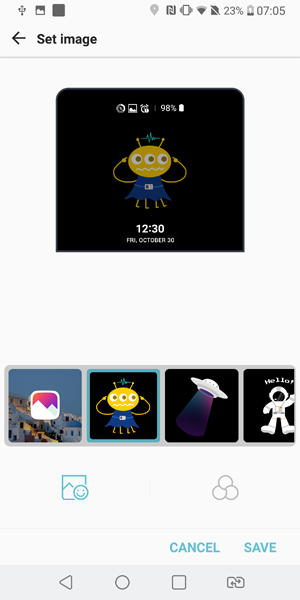 Alternative forms of biometric security, like the iPhone X's FaceID, and Samsung's iris scanning are a hot new thing this year, and LG has also included two forms of secondary biometric security - your face and your voice. Facial recognition isn't as advanced as Apple's FaceID and merely compares the image in the front camera to the one it has on file. As you might expect, this can be easily fooled with a picture (which is why LG warns you that using it will make your phone less secure) and is more for convenience than security. It's basically the same facial recognition software Samsung has on its phones. 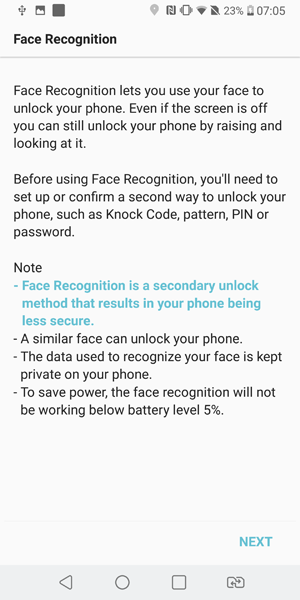 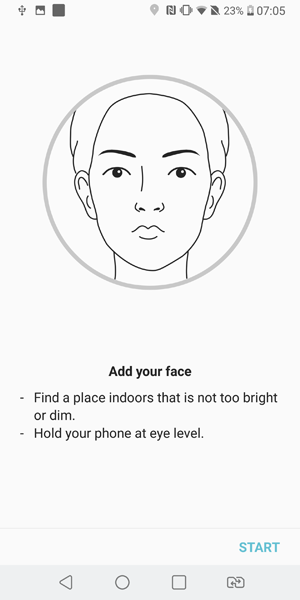 Voice recognition lets you unlock the V30+ by saying a pre-defined key phrase, such as "Open Sesame". The phone is always listening, so you can just say this at any time to unlock it, similar to how you launch Google Assistant by saying "OK, Google." Obviously you don't want to blurt this out in the middle of a crowded train where anyone could hear. While the phone didn't unlock when my wife tried speaking my unlock phrase, my father, who I guess can do a pretty decent impression of me, was able to get the phone to unlock pretty easily. A voice recording of me saying the phrase also worked no problem. Honestly, it's faster and more convenient to just use the fingerprint scanner to unlock your phone, so I wouldn't recommend this option either. And saying your password out loud just seems like a bad idea anyway. 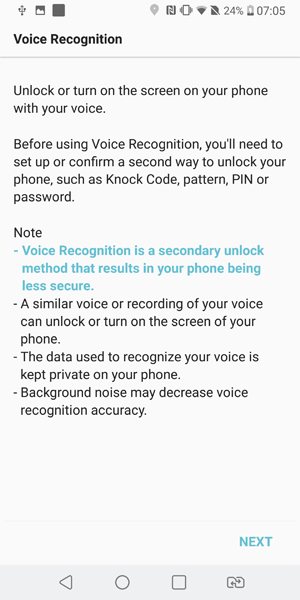 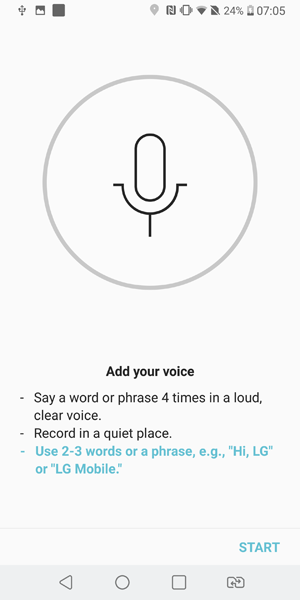