While this review is about the G6T, I managed to take a look at the E6T at around the same time, and I’m happy to report that picture quality differences between the two are few and far between. In other words, for the most part, the following observations also apply to the E6T. Perhaps more importantly, especially for those who broke or are breaking the bank for either of these OLED TVs, both of them trump all other LED-lit LCD TVs I’ve come across this year. 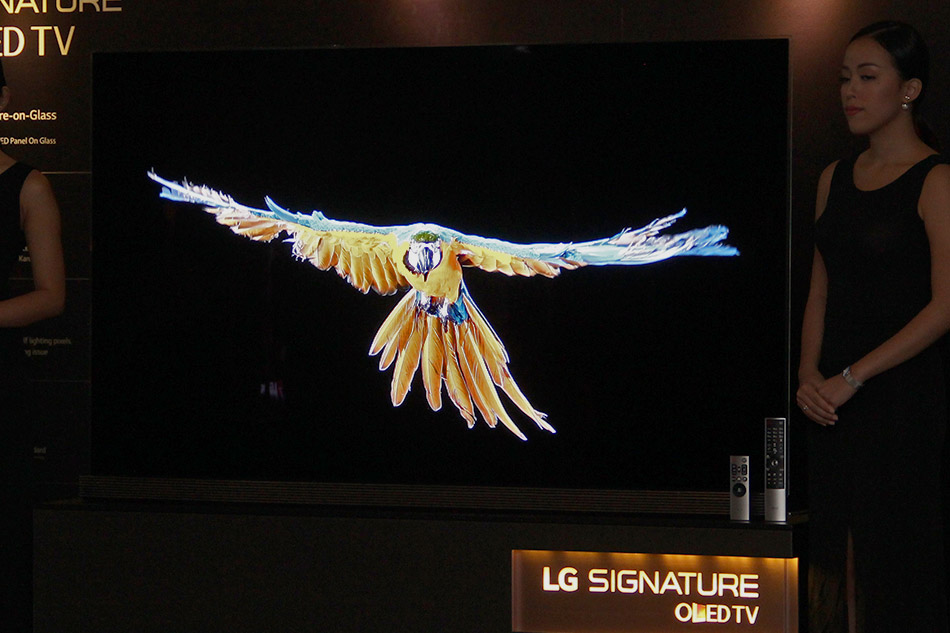 In terms of DCI-P3 color space coverage, the G6T is able to cover nearly the whole space. This is based on CIE 1976 uv; in CIE 1931 xy, it’s probably closer to 95%. Either way, these are chart-topping results.

The G6T’s OLED advantage is very apparent in my test environment, which is a fairly dim room with just a bit of natural light coming through the shades on one side. You don’t really need to be an expert to tell an LCD TV and OLED TV apart: while the very best LCD models like the Samsung KS9000 and Panasonic DX900 are neck and neck with the G6T in terms of color vibrancy, the G6T’s way deeper blacks are unmistakable and easy to pick out. Be it the starry night sky, letterbox bars from a 2.40:1 image, or the copyright notice before a Blu-ray movie, the blacks on the G6T always remain…well, black. For the uninitiated, this is all possible because each of the OLED pixels is able to produce its own light and turn it on or off as required, as opposed to LCD tech that needs groups of (LED) backlights to be placed behind or at the side of the panel. As such, OLED TVs are also immune to the haloing or blooming shenanigans that LCDs face.

The inherent per-pixel control nature of OLED also lends well to contrast. Since a black OLED pixel is simply an unlit pixel, contrast ratio is infinite. If you’re always wondering why people say OLED displays look “gorgeous” and “more realistic”, these are the main reasons. 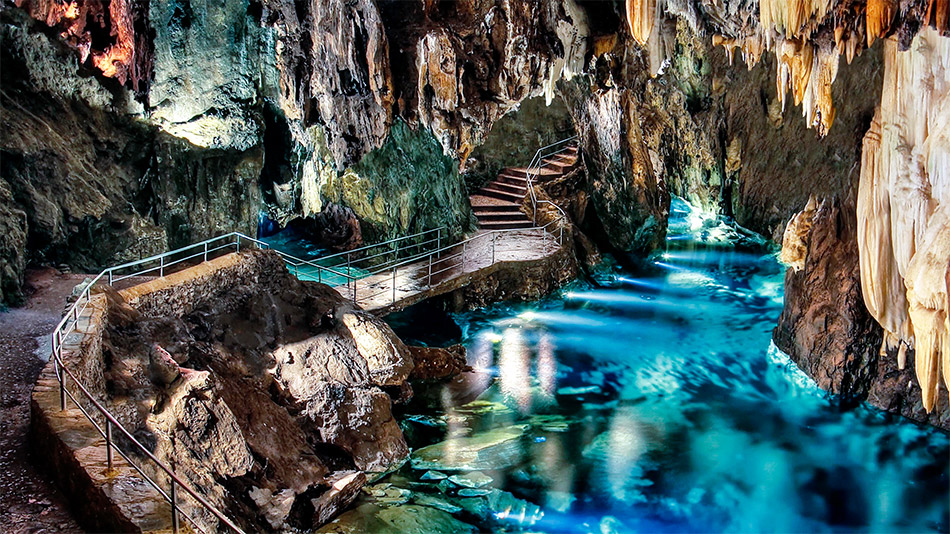 Of course, OLED isn’t perfect. Uneven screen uniformity is a commonly-cited issue, and I’ve no reason to believe that the G6T is an exception to the rule. Being LG’s highest-end TV however, manufacturing tolerance is probably tighter for this model, because I didn’t notice any banding or brightness irregularities on my G6T test unit. In any case, unless it’s super serious, minute screen uniformity issues aren’t likely going to be noticed by most people, as regular content playback tends to do a good job masking them. If you observe any picture quality issues, there’s a Clear Panel Noise function under Picture > OLED Panel Settings. You can choose to start the correction immediately, or when you next switch off the TV. Because this is a 4K TV with millions of pixels, expect the process to take at least an hour. 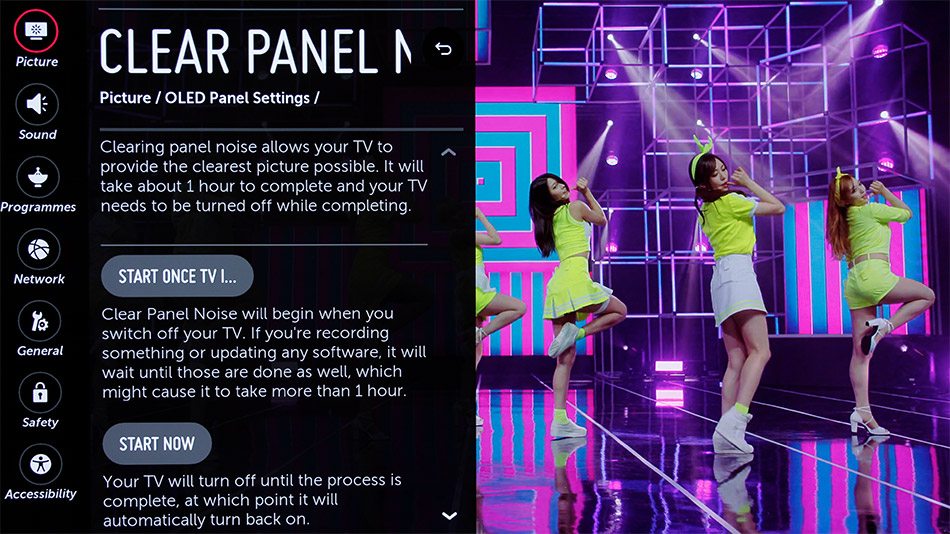 In theory, OLED TVs like the G6T are not as good as LED-LCD TVs in a bright room, because aided by a backlight unit, the latter have the headroom to go way brighter to mitigate contrast dips or legibility problems brought about by the strong external light source. In reality though, unless you’re going to put the G6T under the sun, I find the OLED TV equally enjoyable in a well-lit room. It is true that the G6T is unable to hit the 1,000 nits brightness heights of premium LED-LCD 4K HDR TVs (the G6T tops out at around 600 nits), but once again, because most scenes don’t stay at that level of brightness, OLED’s exceptional black level performance and contrast eventually swing the image quality contest to its favor. And oh, viewing angles are near-perfect for the G6T, which isn’t surprising as that’s a well-documented strong suit of OLED.

If I were to nitpick, the G6T’s handling of motion is still a bit iffy. When TruMotion is disabled, pictures don’t look sharp enough. And while motion resolution improves when TruMotion is at work, 24fps material will lose a bit of its charm as everything now looks smooth. If you like to tweak, there’s a User setting that offers De-Judder and De-Blur controls.

The other gripe I’ve is the occasional crushing of shadow details. Thankfully, increasing brightness just a couple of notches brings them into view, with no ill effects to black level performance. 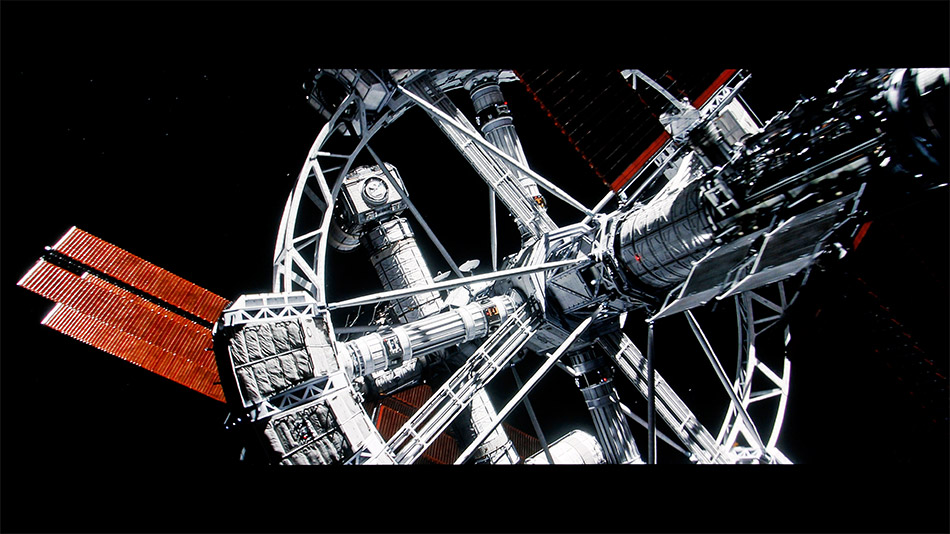 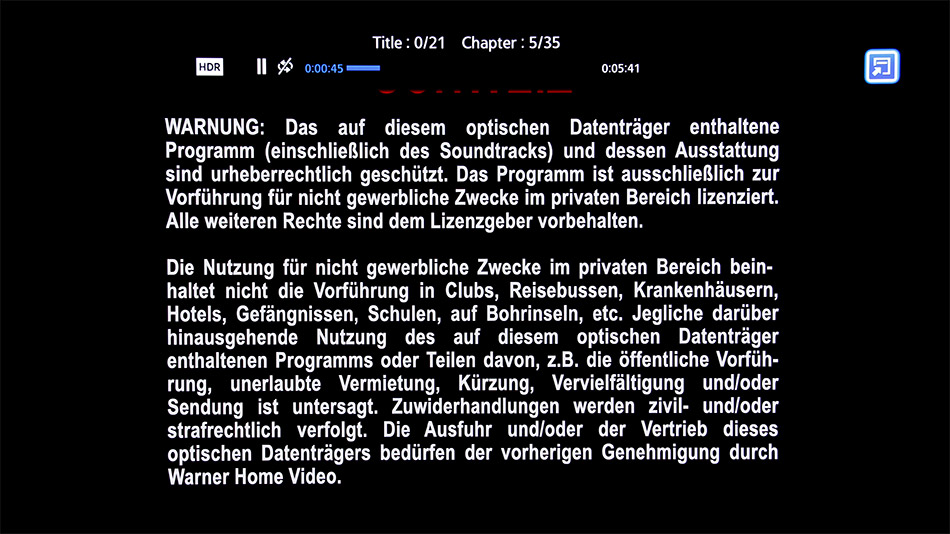 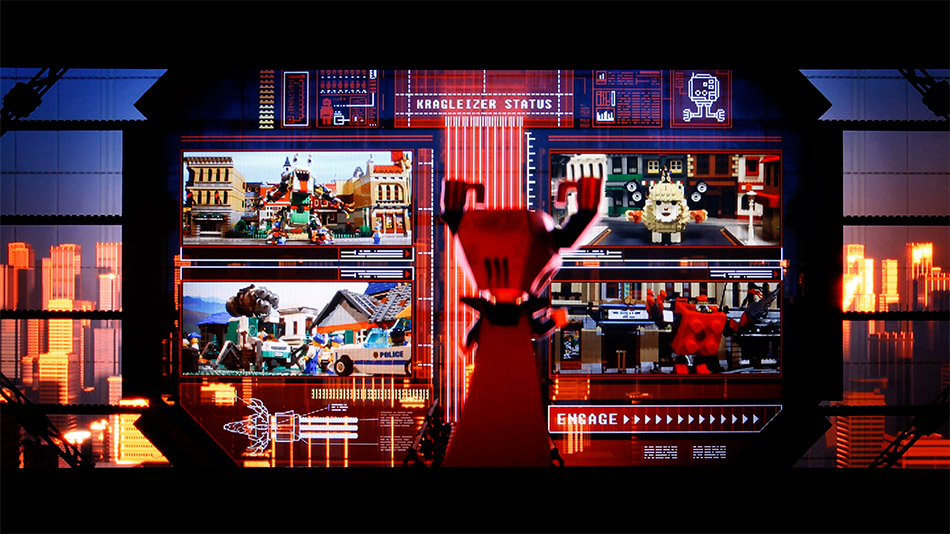 Conclusion: If you can afford it, get it

I’ve written about TVs for quite a while now, and the LG Signature G6 OLED TV is bar none the best TV I’ve laid my hands and eyes on. The best thing about technology is that next year’s OLED and LCD TVs will get better, but this year, this very exact moment, the G6T is the king of the hill.

I’ve already spent quite a bit of digital ink explaining why I think the G6T is great, but at the end of the day, only you can be the arbiter of its worth. Personally, I find no major pain points with the G6T. The design is super sleek, its WebOS system is speedy and fun to use, it’s filled to the brim with features (UHD Premium-certified, HDR10 and Dolby Vision support, Smart Remote, Harman Kardon speakers), and its picture quality is top drawer. But are all these enough reasons for you to fork out S$12,999 for the 65-inch model?

It's a little too pricey, any other options?

Which is probably why LG makes the E6T. At S$9,999 for the 65 incher, the E6T is S$3,000 cheaper than the G6T, and that’s substantial. Sure, there are some cosmetic differences (mostly the stand and the ports area, and fit and finish stuff like the remotes), but these are little things. Image quality-wise, it’s as good as the G6T. So the more pragmatic half of me would say to go for the E6T and use the savings to maybe buy a UHD Blu-ray player and tons of discs. That said, if you want the biggest and the best, you’ve to go with the G6T, as it’s the only one to have a 77-inch version, and that costs a staggering S$36,888.

Of course, it’d be remiss of me to not point out that there are several very fine 65-inch 4K HDR LCD TVs out there today, such as the Samsung KS9000 SUHD TV, the Panasonic Viera DX900, and the Sony Bravia Z9D. The Z9D is the priciest of the trio, but even that only costs S$8,999. So if you're shopping for a high-end TV, there’s certainly a good case to consider these premium LED-LCD TVs from a cost perspective or if you're lukewarm to the benefits of OLED.

The LG Signature G6 OLED TV is out in stores. Go see it in action at major electronic superstores like Harvey Norman and Best Denki if you need further convincing. 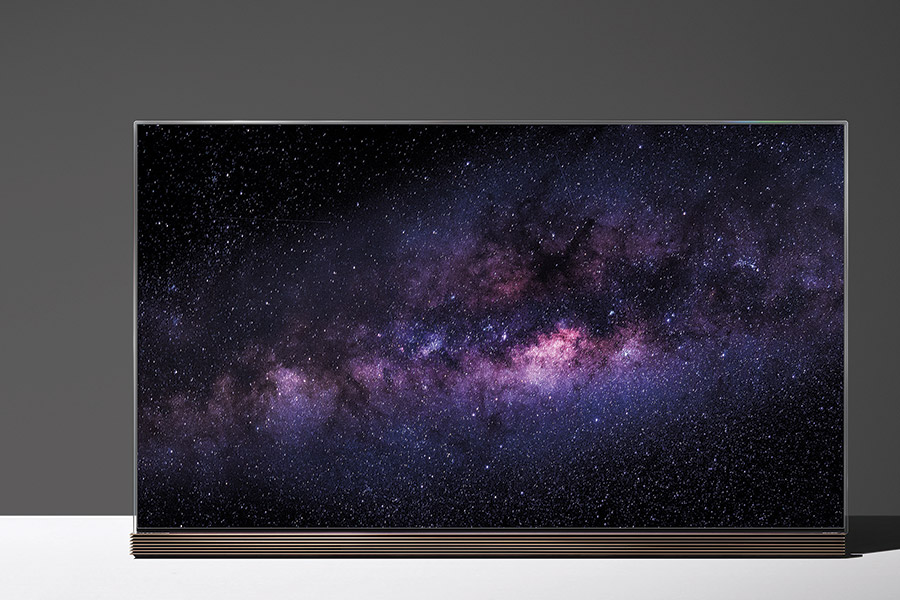 Update, Nov 4, 9 PM: Amended price of the 77-inch G6T. The initial price announced during its April launch was S$41,999. With the TV finally arriving in stores, LG has finalized the retail price to be S$36,888.

Write a Review
Compare This | Specifications
Crazy-thin picture-on-glass design
Best-in-class black level performance
Wide viewing angles, wide color gamut
HDR10 and Dolby Vision support
WebOS 3.0 is non-intimidating and fun to use
Very, very expensive
Similar performance can be found in OLED series before it
Only 2 HDMI ports support UHD Deep Color
Minute crushing of shadow detail
Our articles may contain affiliate links. If you buy through these links, we may earn a small commission.