News of the LG Optimus G first broke days before IFA 2012, where the company was alleged to announce the flagship device. On 28 August 2012, LG Electronics took the wraps off the Optimus G, and proclaimed its latest flagship device to be the best smartphone for consumers. To understand why is it such, it's important to know that LG worked with its sister companies (LG Chem, LG Display and LG Innotek) and Qualcomm to develop the Optimus G, which is also the first quad-core LTE smartphone to be powered by the Snapdragon S4 Pro APQ8064 processor.

Within four months, LG has sold over one million units of the Optimus G worldwide. An impressive reception considering that the phone was only available in Canada, Japan, South Korea and the U.S in January 2013. Locally, M1 and StarHub started the registration of interest for the LG phone in late January in anticipation of its availability in early February, a marketing and promotional activity that is usually reserved for very popular smartphones such as the Samsung Galaxy S III, Galaxy Note II, Apple iPhones and iPads. Now the main reason for the disparity in worldwide availability (according to LG) was due to the company's strenuous quality testing which meant the supply outflow was limited. This is unfortunate since it's now competing with newer 5-inch phones touting full HD screens like the Sony Xperia Z and the HTC Butterfly.

Still, you must be wondering what industry leading technologies and innovations are within the Optimus G that propelled the South Korean company to center stage with their latest device. Well, you will find out all about that in our review and if it's worthwhile your time. Before we dive into the details, here's a quick look at the key specs of the LG Optimus G: -

It is apparent that the design of the Optimus G is inspired from the essence of the company's previous phones which include the Optimus 2X, Optimus Black, Prada Phone, L9 and the Optimus 4X HD. Suffice to say, the Optimus G boasts a simple and clean look that is neither boring nor refreshing.

As seen in the LG Nexus 4 and Sony Xperia Z, we noticed a growing trend among Android vendors to outfit their devices with rear glass panels. This is actually not a new trend as Apple has implemented the same design strategy in the iPhone 4 and 4S. However the Optimus G design team didn't stop there and adopted an LG developed and patented technology, Crystal Reflection Method to give the Optimus G a unique look. Through Crystal Reflection, the rear glass panel is able to display differing patterns under varying angles and lighting conditions.

Despite LG's efforts, the intricate look is marred by the speed at which the glass panel picks up fingerprints and smudges. The Optimus G is not alone in facing this issue; the Nexus 4 also suffered a similar fate after a few minutes of handling. If you are concerned about scratches appearing on both sides, fear not as the glass layers are made up of Gorilla Glass 2 which will keep scratches at bay most of the time.

The front of the Optimus G is dominated by a 4.7-inch dislay, with the LG logo and brand prominently located at the top center. You will find a LED notification and the 1.3-megapixel front camera on the right.

Below the display are three capacitive navigation controls which light up when touched: Back, Home and Menu. You can set the duration at which they remain lit (1.5-sec, 3-sec, 5-sec or always on). For now, the Xperia Z and Nexus 4 are the only two recent phones in the market to sport on-screen buttons. One may argue that on-screen navigation keys take away unnecessary screen real estate, but we feel that it ultimately depends on individual preferences. In the case of phones with on-screen navigation buttons, they usually have more room to handle the phone and you don't have to stretch out to the bottom of the device, thus providing you a more balanced handling experience. To better understand this point, just look at the below photo comparing the Optimus G on the left and the Nexus 4 on the right. 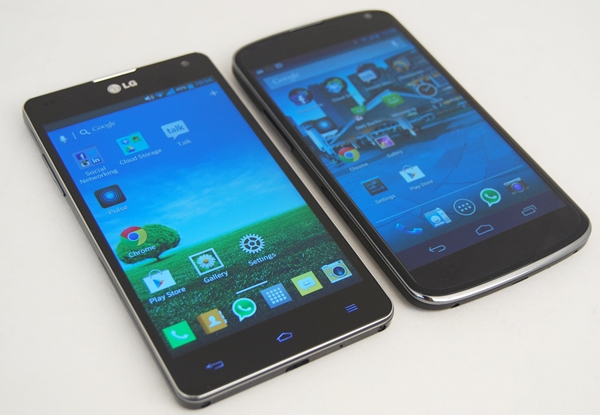 In terms of handling, we had no problems with the Optimus G. Measuring 131.9 x 68.9 x 8.45mm and weighing 145g, the Optimus G is the most compact (in volume) among the 4.7-inch Android smartphones although it is the heaviest. Below is a quick comparison with the other similar screen sized phones:

The Optimus G is powered by Android 4.1.2 Jelly Bean and like its HTC and Samsung counterparts, has a customized user interface. While we've seen similar features on the Optimus 4X HD,the Optimus G sports some new features that are quite interesting.

Peek under the Lockscreen 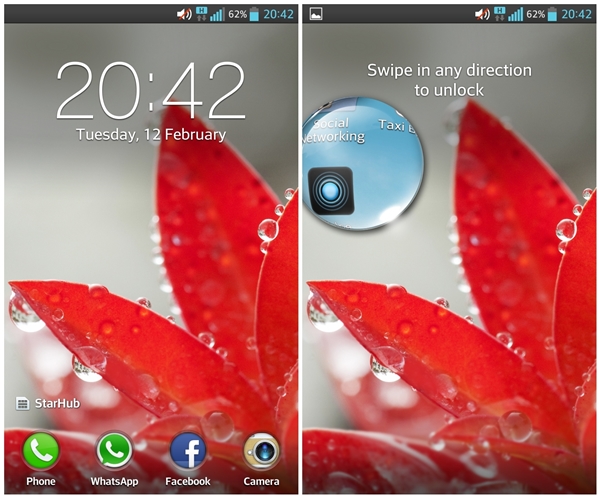 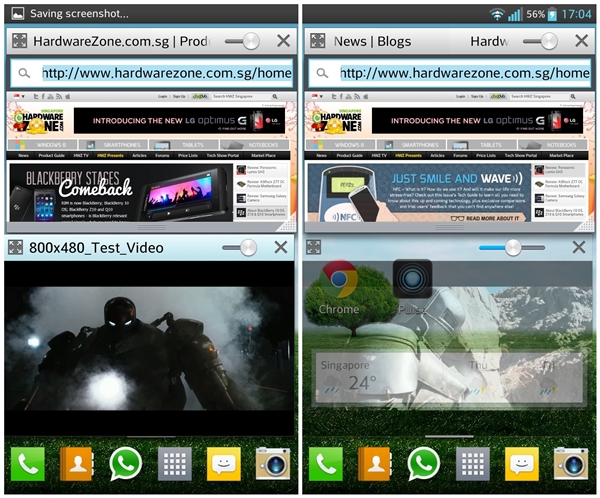 At first impression, you may think that LG is blatantly copying Samsung's multitasking features on the newer Galaxy devices. However, there is more to than meet the eye. LG includes a toggle to adjust the transparency of the app, so that you can focus on doing the other task.

In a scenario where you are watching a video and an email pops into your mailbox. You do not want to stop the video halfway but you are wondering if the email is an important one. You engage the QSlide feature, increase the transparency of the video while navigating to your inbox to check out the new message. Here's a quick video demo of it in action when we first played with the device in CES 2013 (pardon the video quality as YouTube's option in improving the video actually made it worse):-

For now, you can only choose two out of the five QSlide enabled apps to multitask on the 4.7-inch display. They are Videos, Internet, Memo, Calendar and Calculator. Samsung, on the other hand, has a list of 13 apps for you to select. In both cases for LG and Samsung, they depend on apps to be designed for this function and it's not a universal interface tweaking option that could apply to any and all apps.

In the next iteration, we hope these proprietary functions are somehow made a part of the skin used in each phone, else it's either a never-ending chase of updating apps for these added functions or the more likely case would be users having to live with those few enabled apps. For now, the good thing is that both companies have identified key apps that will often be used and ensured these added functions would better help productivity and user-friendly multitasking. 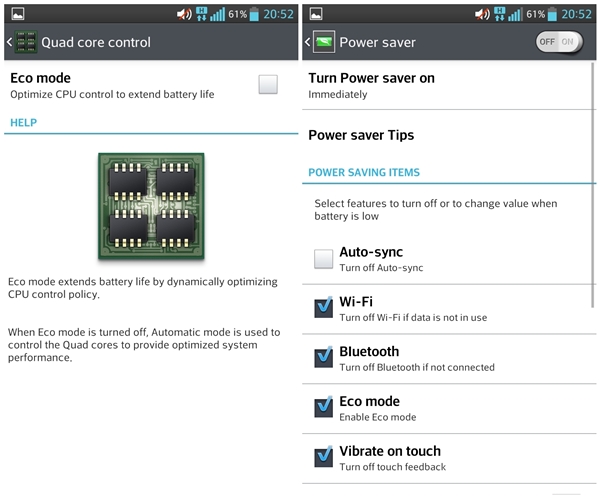 Eco Mode and Quad core control are basically the same feature. In the Quad core control app, you can enable Eco Mode where the device will automatically switch to dual-core function so as to optimize CPU control for extending battery life. 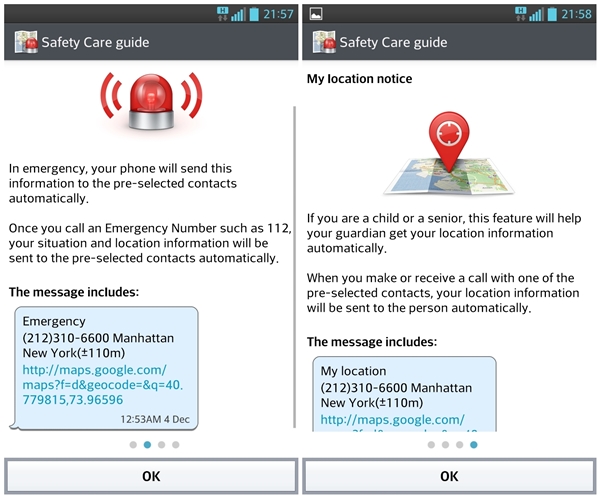 Safety Care offers three services: emergency call forwarding, phone non-usage notice and location notice. In the first scenario, once the phone detects that you dial an emergency number, your situation and location information will be sent to the pre-selected contacts automatically.

In the second scenario, if the phone is not used for a period of time, it will automatically send an alert to the pre-selected contacts. As for the third scenario, the phone will automatically send the user's location information to the pre-selected contacts whenever the user makes or receives a call with one of the contacts. In all, this function acts as an emergency tracker of sorts. 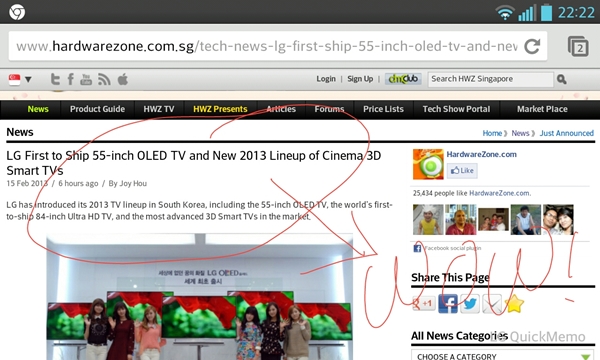 Similar to S Memo on the Samsung Galaxy Note devices, LG also has its variant, QuickMemo. However, the absence of a stylus or pen input like the S Pen makes one truly appreciate the need for a stylus to be used in conjunction with such note taking apps. LG's own take of the Smart Stay feature on Samsung's newer devices is Smart Screen, where the front-facing camera is used to detect whether the user's eyes are looking at the screen. While it may sound and function similarly to its competitor, we can assure you that you will really enjoy having this function, especially when using the phone as an e-reader.