We have adopted a few benchmark tests specific to the Android platform for a few reasons. With the Google Android platform maturing so quickly, choosing a suitable phone in a growing sea of Android devices with close to identical specs is extremely difficult. To add on, with manufacturers jumping on the dual-core processing bandwagon, these results will give a gauge of how they will fare against their lesser-endowed counterparts. Also, should a phone not perform favorably in our usage experience, these results would also help add a valuable dimension to further back up why it didn't meet expectations. Hopefully, these benchmarks will allow for a clearer picture on which smartphone is worth your while.

Within this page, we'll be looking at two specific benchmarks, both of which are downloadable via the Android Market.

Do note that the above two benchmarks are not absolute in measuring performance, but they give you a good rough estimate of how the device performs. Our tests were conducted on devices from a fresh reboot on a stock firmware. To show how the LG Optimus 3D performed against similar smartphones, we compared its results against the following high-end Android devices - HTC EVO 3D, HTC Sensation and Samsung Galaxy S II. 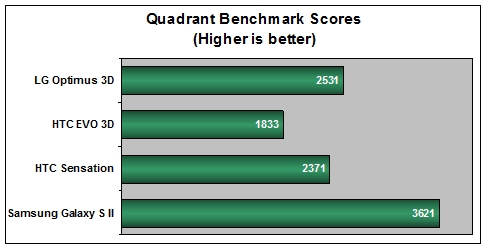 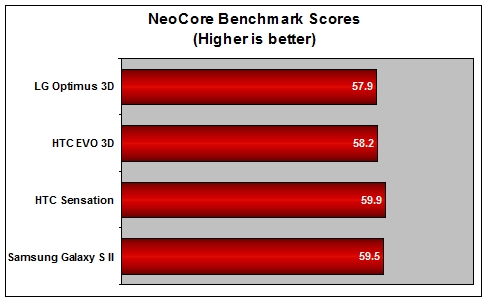 With a score of over 2000 on most of the dual-core devices (considering how usually only single-core variants manage below this mark), the Quadrant benchmark did not deviate much from the expected results. The LG Optimus 3D comes with the least powerful hardware specs out of the lot (not to mention that it is preloaded with Android 2.2 instead of 2.3). Nonetheless, the smartphone sports a powerful dual-core 1GHz processor and ample 512 RAM. Benchmark results show however, that the LG Optimus 3D came in second in terms of Quadrant benchmark scores, almost nose-to-nose with the HTC Sensation's results. Noticeably, it performs better than its closest competitor, the HTC EVO 3D despite the latter's dual-core 1.2GHz and 1GB worth of RAM. Considering both HTC devices run on a graphics-intensive Sense UI, this fact might play in LG Optimus 3D's favor.

However, when it comes to the NeoCore scores, all devices gave remarkably similar scores. With an FPS score of 57.9, the device admittedly has the lowest result of the lot but just slightly. This however, has little bearings on its actual performance; in fact, the LG Optimus 3D performed smoothly. 2D and 3D apps loaded almost instantaneously and we experienced no lags and crashes in performance while surfing the web, or running various apps during our test run. However, we noticed two irregularities: occasionally, navigation does get rather sluggish especially when it comes to adding on widgets and shortcuts; secondly, the phone heats up relatively easy, even after only about 15 to 20 minutes of 3D gameplay.