Television makers tend to favor edge-LED backlights since they typically involve lower production costs. On that note, we'd like to applaud LG for braving the odds with a direct LED model as seen in their newly minted 55-inch LM9600 Cinema 3D Smart TV. Essentially, the LM9600 comes with LG's full-array Nano LED structure and local dimming perks, much like the one found on last year's 55-inch LW9800. For our local market, however, the LW9800 was unfortunately ditched in favor of the LW9500. Now, most television enthusiasts would understand the benefits of a full-array LED backlighting solution. Generally, they offer a deeper and more uniform black levels across the LCD display panel, depending on how exclusive the segmented LED clusters are. Not only has LG managed to accomplish a full-array formation in a 38mm-thin display, but they've also trimmed their bezel down below the 5mm mark - a design marketed as "Cinema Screen" according to the South Korean firm. 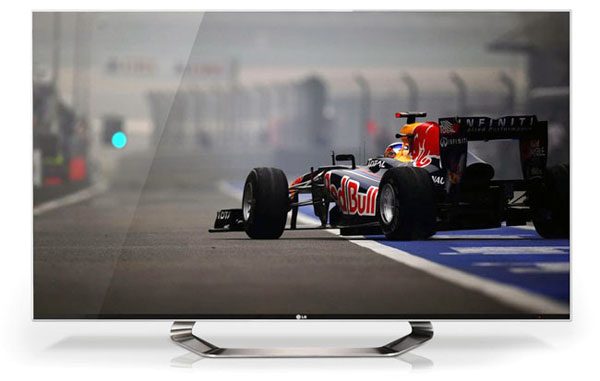 It's good to know that LG hasn't rested on their laurels either. The LM9600 flaunts a very zippy Motion Clarity Index of 1,000Hz (via frame interpolation and scanning backlights dubbed as TruMotion) with an equally impressive native refresh rate of 400Hz. Picture quality wise, LG has improved on their scaling algorithms for lower resolution videos, plus a 10,000,000 to 1 contrast ratio rating. That said, we'll regard the latter specification with a pinch of salt and revisit this later after our through analysis of the TV in the following pages. At the 3D end, LG latest passive 3D TV continues its assault on the active-shutter faction with more tweaks of its own. Some of the new features include 3D Depth-Control, and Color Correction - designed to correct the possibility of mismatched colors due to separate cameras used for left and right eye images. Powered by a dual-core central processor and a quad-core graphics processing unit, this model possesses the chops to meet Samsung's flagship ES8000 on the warpath as well. There are more new features, of course, like the reworked Magic remote which we'll update you along the course of our review. The LM9600 has form, but will it offer the same cool finesse too? If you're ready, it's time to visit this Cinema 3D set in detail to find out!