As its name suggests, Spiral mode cleans in circles, beginning with a small one and then gradually moving outwards in bigger circles. In Zig Zag mode, the Hom-Bot Square moves back and forth in an orderly fashion, which is useful for large areas with little obstacles. An extension of Zig Zag mode is Cell by Cell mode, in which the Hom-Bot Square would divide the rooms into smaller blocks and then proceed to clean each block in Zig Zag mode before moving to the next. This mode is probably most suitable for most homes.

Complementing all of the above mentioned cleaning modes, it also has a Turbo function that increases the power of the vacuum cleaner, which is useful if an area is especially dirty. Turbo mode is also automatically activated if the Hom-Bot Square finds itself on carpets, which will require more suction to dislodge dust and dirt particles.

Finally, the Hom-Bot Square also features Scheduled Cleaning, which lets users set a time that the Hom-Bot should begin cleaning. This is useful especially if you want it to clean when you are outside or if you are going to be away from the house for holidays or extended periods of time.

Our Usage Experience and Performance

In our experience with the Hom-Bot Square, we felt that cleaning performance is definitely above average when compared to most robotic vacuum cleaners out in the market today. This can be attributed to its long sweeping brushes, its ability to navigate around obstacles and its pathfinding logic and algorithm. We also found that it had no problem picking up most of the dust and dirt in its path and that it remains fairly quiet during operation, being much less noisy and intrusive than standard vacuum cleaners.

The Hom-Bot Square’s pathfinding algorithm deserves special mention because unlike most robotic vacuum cleaners which just goes about cleaning in a random and haphazard fashion, the Hom-Bot Square tries to do it as logically as it can. It does not simply move in a single direction and then changes direction randomly when it approaches an obstacle like some other robotic vacuum cleaners do. Instead, it uses its front-facing ultrasonic sensors to try and clean as close and as much of the area around the obstacle as possible. As a result, we found that it cleans more thoroughly and precisely.

However, the LG Hom-Bot Square is far from perfect. While its pathfinding abilities are above average, it still suffers from some problems that make it less helpful than we would have liked. For example, while the longer sweeping brushes are good for picking dirt and dust in hard to reach places, we found that it is especially prone to getting tangled with wires. This is in partly due to the fact that the ultrasonic sensors are not sensitive enough to identify wires, and also because the Hom-Bot Square was programmed to clean as close to walls as possible. As a result, it often gets close to walls and power sockets and gets tangled up with wires found in that vicinity.

The long sweeping brushes would often get stuck in soft rugs too. This is because the Hom-Bot Square was designed to automatically mount and clean thick rugs and carpets; as a result, it will not avoid these softer, lighter material rugs. The workaround is to either remove these rugs prior to activating the Hom-Bot Square or to use the My Space mode to specify the cleaning area to avoid the rug altogether. 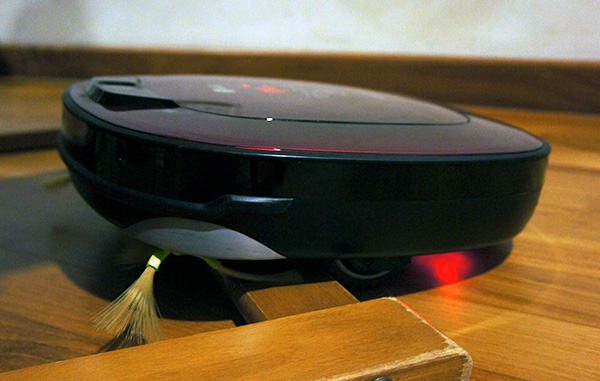 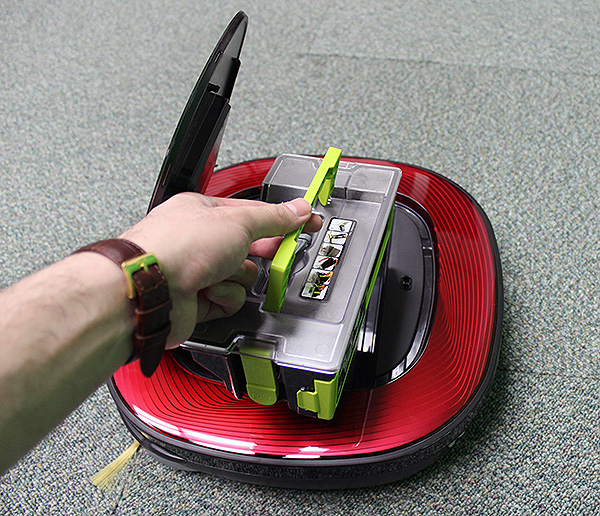 Maintenance and cleaning of the Hom-Bot Square is delightfully straightforward. Pressing on the top panel of the device releases the lid and exposes the HEPA dust bag, which can be easily emptied simply by pulling upwards and away from the device. It is a thoughtful touch considering many robotic vacuum cleaners have dust bags that need to be slid out or yanked out from the device, which in the process creates an unwanted cloud of dust and dirt. LG also provides a cleaning brush to clean the sweeping brushes and the dust roller on the underside of the device.

A Helpful but Expensive Little Helper

Having someone else, or in this case something else, to do the things that you do not like doing is invaluable. And generally speaking, the LG Hom-Bot Square is a decent performer in that it can help clean your room with minimal input and supervision - sometimes.

As advanced and as clever as it is with its ultrasonic sensors and dual cameras and optical sensor, it is no replacement for a human (not yet at least). As we have mentioned in the paragraph above, the key word is "minimal" and in our experience with the LG Hom-Bot, we found that it encounters problems with certain types of furniture, rugs and wires. Therefore, it would not be fair to say that the LG Hom-Bot Square is completely automatic as some preparatory work is needed. For users, this means either removing all potential obstacles, or using the device’s My Space mode to map out the area for cleaning. While this puts a dent on the whole idea of hands-free, fire-and-forget automatic cleaning, it is still a great deal better than having to get your hands dirty. 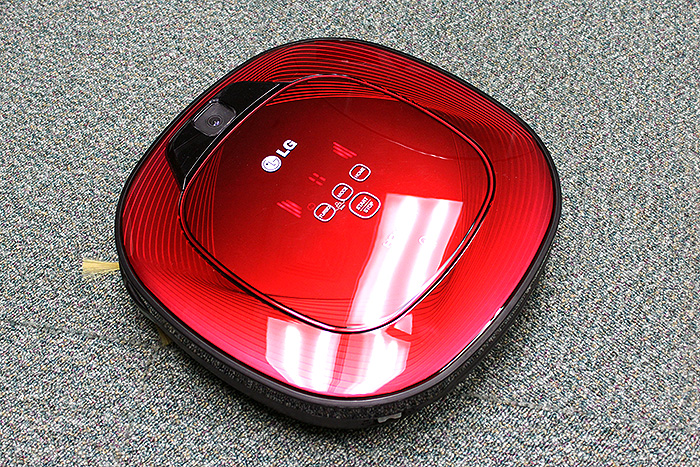 Unfortunately, such convenience comes at a high price as the LG Hom-Bot Square costs a very substantial S$1299, which makes it one of the most expensive robotic vacuum cleaners in the market today.

Is the premium justified? Well, yes and no, because while we were impressed with its variety of cleaning modes and its pathfinding logic, and also of the fact that its cleaning performance was noticeably better than the competition, we were frustrated that it seems to get tangled up in things quite easily if left to its own devices and that some types of furniture could trip it up and cause it to get stuck. Further frustrating us was the fact that the Hom-Bot isn't able to save mapped out areas to be cleaned using the My Space cleaning mode. Had it incorporated saved profiles for users to quickly launch, it would save time and hassle of mapping rooms and areas to be cleaned every time and there's less prep work required by the user to have the room bot-friendly for cleaning. So close and yet so far.

All things considered, the LG Hom-Bot Square is a helpful and useful device, but with its high price, it is only really appropriate for those who have deep pockets and have a really, really strong aversion to cleaning chores.

Take note that this generation of LG's Hom-Bot doesn't yet support LG's HomeChat feature that would allow you to send commands via Line's chat application. That function along with smartphone control via LG's Smart Control app is featured in the next generation LG Smart Hom-Bot Square. There haven't been any announcements on when it would be out in retail, but seeing that it was unveiled in CES 2014, we figure it would make it to the local retail channels in the second half of this year. Perhaps it has improved on some our misgivings from the current generation Hom-Bot Square? We'll find out when we get hold of its Smart counterpart for review in the future.