Since the LG Gram 15 is as light as most Ultrabooks, we'll be comparing its performance against some of the 13-inch Ultrabooks that we have recently tested such as the gorgeous HP Spectre and the very excellent Dell XPS 13. You can find the list of benchmarks used and notebooks tested below.

PCMark 8 tests a system’s performance by putting it through different tasks that reflect the workloads typical of various kinds of users, for instance the casual home user or the working creative professional. The LG Gram 15 has almost identical specifications to the other 13-inch Ultrabooks and so it was no surprise to see that it managed very comparable scores on PCMark 8. The only outlier was the Apple MacBook, and that’s because it is equipped with a less powerful Intel Core m3 processor. 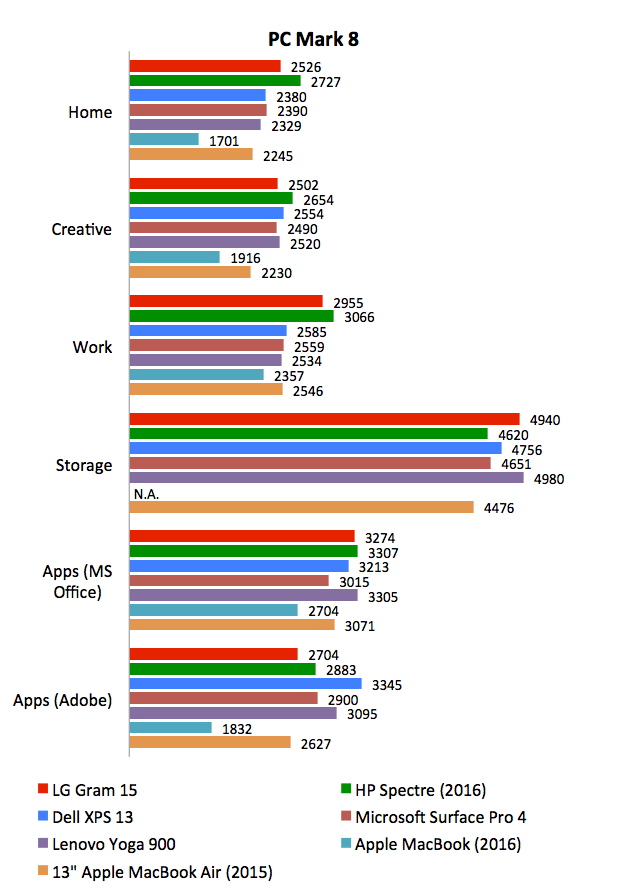 The LG Gram 15 has the same Intel HD Graphics 520 integrated GPU as most of the other notebooks here, but its numbers here were a little underwhelming. On Cloud Strike, it managed 4828 points, which was nearly 15% less than the other notebooks with the same integrated GPU. And on the more intensive Fire Strike, it scored 669 points, which was again the lowest of all other comparable notebooks. This could be because of its less efficient cooling system, which wouldn’t be out of the ordinary since it has to use smaller fans to accommodate its smaller dimensions. 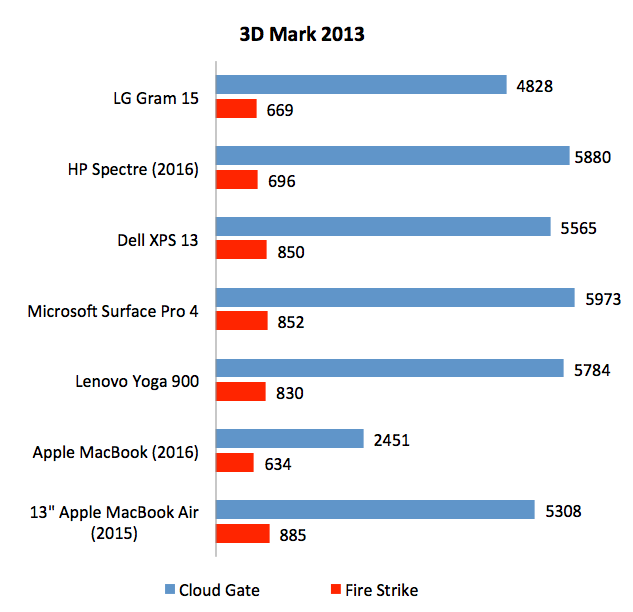 The LG Gram 15’s underwhelming graphics performance continued on Far Cry 2. Again, despite having the same integrated GPU, the Gram managed frame rates that were about 25% lower than the other notebooks with comparable specifications. It even scored lower than the MacBook Air, which is powered by last year’s Broadwell processor. 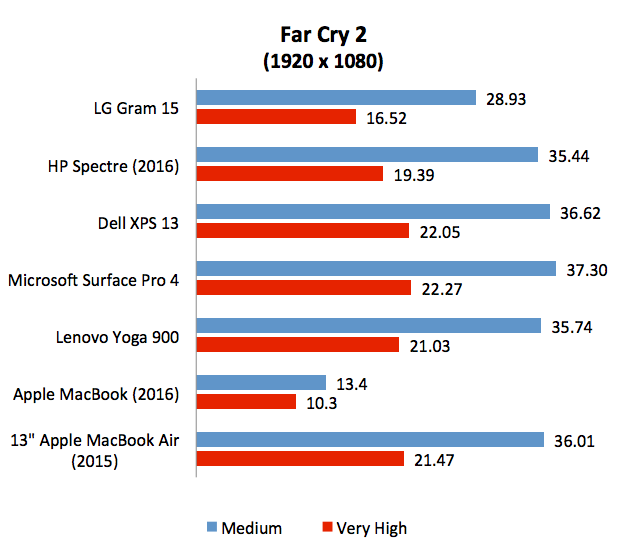 It wasn’t any better on Tomb Raider, which is a far more intensive game. Even though the frame rates suggest that the performance was pretty close, the LG Gram15  was still consistently slower than its rivals, though the difference in this case was reduced to a much smaller margin of around 10% on average. 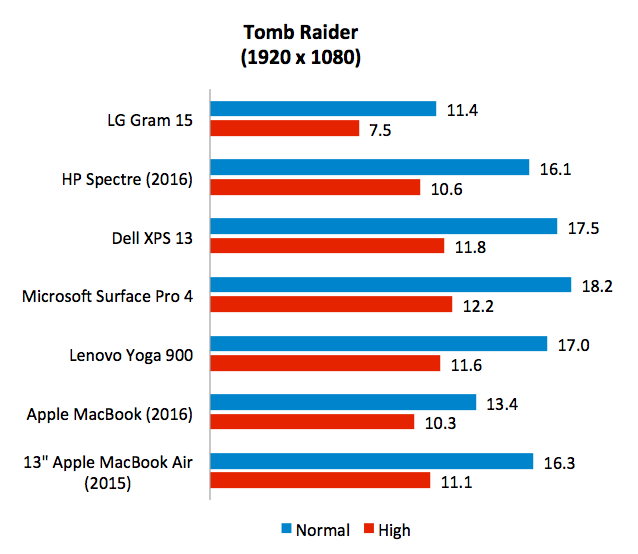 In our battery life test, the LG Gram 15 managed a respectable 183 minutes or just over 3 hours. Though that may not seem much at first, we must remember that the Gram 15 actually has the smallest battery here at just over 34Wh. Its power draw of 11.35W was also one of the lowest - bested only by the Apple MacBook and MacBook Air. That said, our battery test is pretty intensive and consists of intensive graphics workloads and gaming that quickly drains batteries. Users will certainly be able to get more out of the Gram 15 if their intended use is for lighter tasks like web browsing and watching videos. 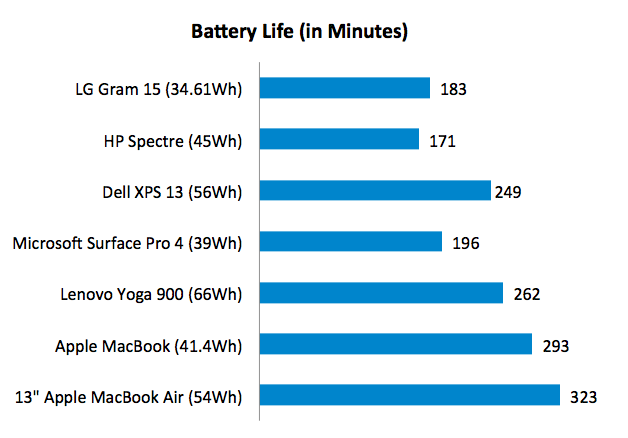 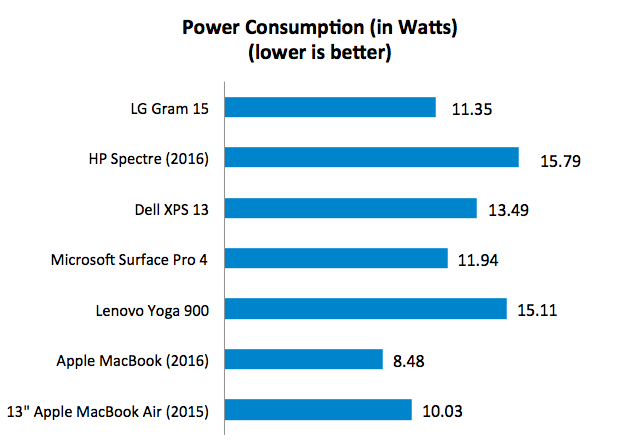 Our portability index attempts to provide an objective measure of how portable the different ultrabooks are relative to each other by taking into account things like size, weight, and battery life. Though the LG Gram 15 managed a ratio of just 2.276, it is actually very impressive for a 15-inch notebook. Most 15-inch notebooks will struggle to get a ratio of even 1, as can be seen in our review of the ASUS ROG G501 here. The ROG G501 is a thin and light gaming notebook and even it managed a ratio of just 0.889. Hence, the Gram 15’s portability ratio is really an impressive achievement. 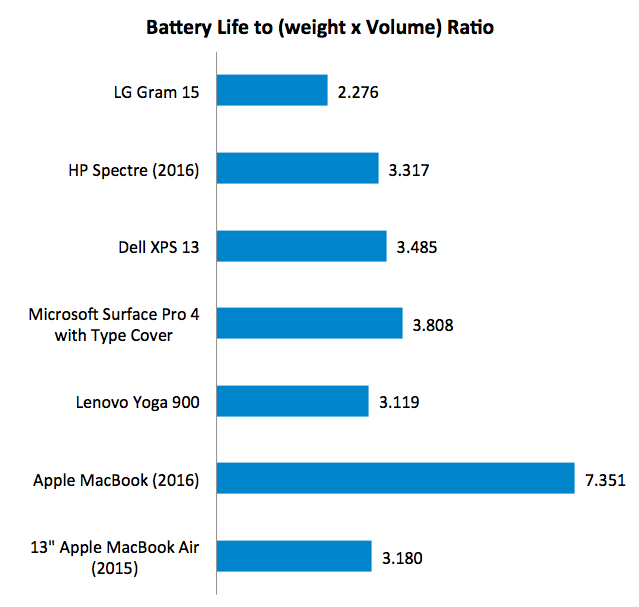