A stunningly light notebook, albeit with some compromises

The LG Gram 15 is a stunning achievement in notebook design, mainly because of its weight, or rather lack of it. Very few 15-inch notebooks even come close to hitting the 2kg mark, so for the Gram to manage under a kilogram is just amazing. And as our video shows, everyone we showed the Gram 15 to was amazed by its incredible weight for its screen size.

Unfortunately, in its pursuit of weightlessness, the Gram 15 does suffer from some compromises. Most of all, it is the feel of magnesium alloy, which feels eerily like plastic. Given our past experiences with Sony being one of the earlier notebook vendors to dabble with various material designs, we can safely concur that this plastiky feel is a downside despite the use of an all metal-alloy design. And then there’s the flex in the body, and the wobbling that the top panel suffers from when typing. All in all, the feel of the Gram doesn't inspire much confidence, even if LG insists that the new 15-inch Gram is up to 70% more durable than last year's 14-inch Gram.

There are also some minor gripes with regards to the keyboard and the display. Though the display offers wide viewing angles, and is sharp and vibrant; it is a little too dim for our liking. On the other hand, the keyboard takes time to get used to as it feels a tad cramped and some keys - "Enter" and "Backspace" - are far too small. While incorporating a numpad is definitely a good idea for those who dabble with numbers often, some of the main keys have had to make do with a tighter layout. 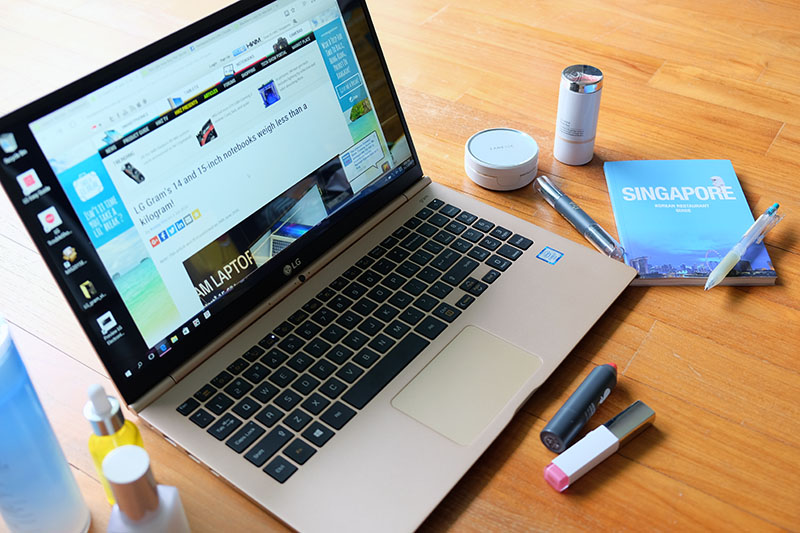 On the bright side, there’s also plenty to like about the Gram 15 aside from its weight and portability. First of all, we were especially pleased to find that LG hasn’t decided to sacrifice on functionality by cutting down on I/O ports. The Gram 15 features full-sized USB and HDMI ports, which makes connecting peripherals such as external storage devices and external displays a breeze. It even has a USB Type-C port, which means its ready for newer peripherals too. We also liked that LG has gone one step further and equipped with the Gram 15 with an integrated DAC. This shows that they were clearly designing the Gram 15 with entertainment enthusiasts in mind.

Apart from its rich set of features, the Gram 15 also impressed us with its overall performance. It’s certainly more a match for other notebooks with similar specifications, albeit the graphics performance was a little below par, though we sort of expected such an outcome for a notebook that's this thin. In practice however, it runs smoothly and briskly, and is more than capable of handling any amount of videos, emails, and photos, that you can throw at it for general productivity/creativity tasks as our PCMark benchmarks peg it just as good, if not better than some of the compared machines.

The Gram 15 is available in three different configurations and ours is the top-of-the-line model that comes in at S$2,199. The mid-range model is S$1,899 and differs in only having a smaller 256GB SSD. The entry-level model is S$1,699, and it has a less powerful Core i3-6200U (2.3GHz, 3MB cache) processor and also only 4GB of RAM and a 256GB SSD. Here’s a table that details the three configurations.

This makes the Gram 15 good value for money, because comparable notebooks with similar specifications that we have tested with the same portability as the Gram 15, such as the Dell XPS 13 and Lenovo Yoga 900 are slightly pricier at S$2,299. HP’s new Spectre, which weighs just 1.11kg, is even pricier still at S$2,599. And if you find the top-of-the-range model a bit much, there’s two additional, and more affordable, configurations to choose from. Last but not least, there's also 14-inch variant of the LG Gram that is only available with a Core i5-6200U processor with 4GB of RAM and a 128GB SSD for priced at S$1,499.

To sum up, the new 15-inch LG Gram is a design and engineering achievement for 15-inch notebooks. It might not be perfect, but to build a 15-inch notebook that’s so light and portable is truly remarkable. If you have been put off from 15-inch notebooks just because they are too bulky and heavy, you’ll definitely want to give the new Gram 15 a try. For such a game-changing effort for the 15-inch notebook industry, we're awarding the LG Gram 15 our Innovation Award.