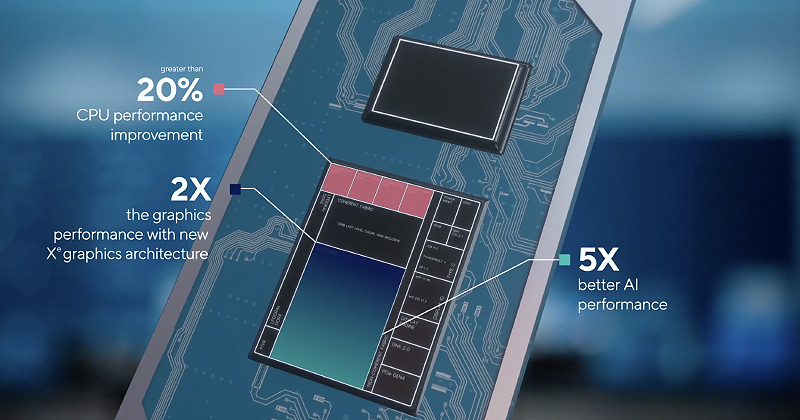 The LG gram 14 is powered by a Core i7 version of Intel's Tiger Lake processor. It also has 16GB of memory and integrated Intel Iris Xe graphics. We will be comparing its performance against that of other ultraportable notebooks like the Acer Swift 5, Dell XPS 13, Razer Book 13, and more.

The notebooks will be tested using the following benchmarks and applications:

Here’s a quick recap at how the LG gram 14 stacks up against its competitors:

As you can see from the graphs below, the LG gram 14 often finds itself in the middle of the pack. It was neither the fastest nor the slowest. If performance is a priority then you'd be better off with notebooks like the Acer Swift 5 or Lenovo Yoga Slim 7i Carbon. Where the gram 14 really excels is power efficiency and battery life, which you will see in the battery life section below. 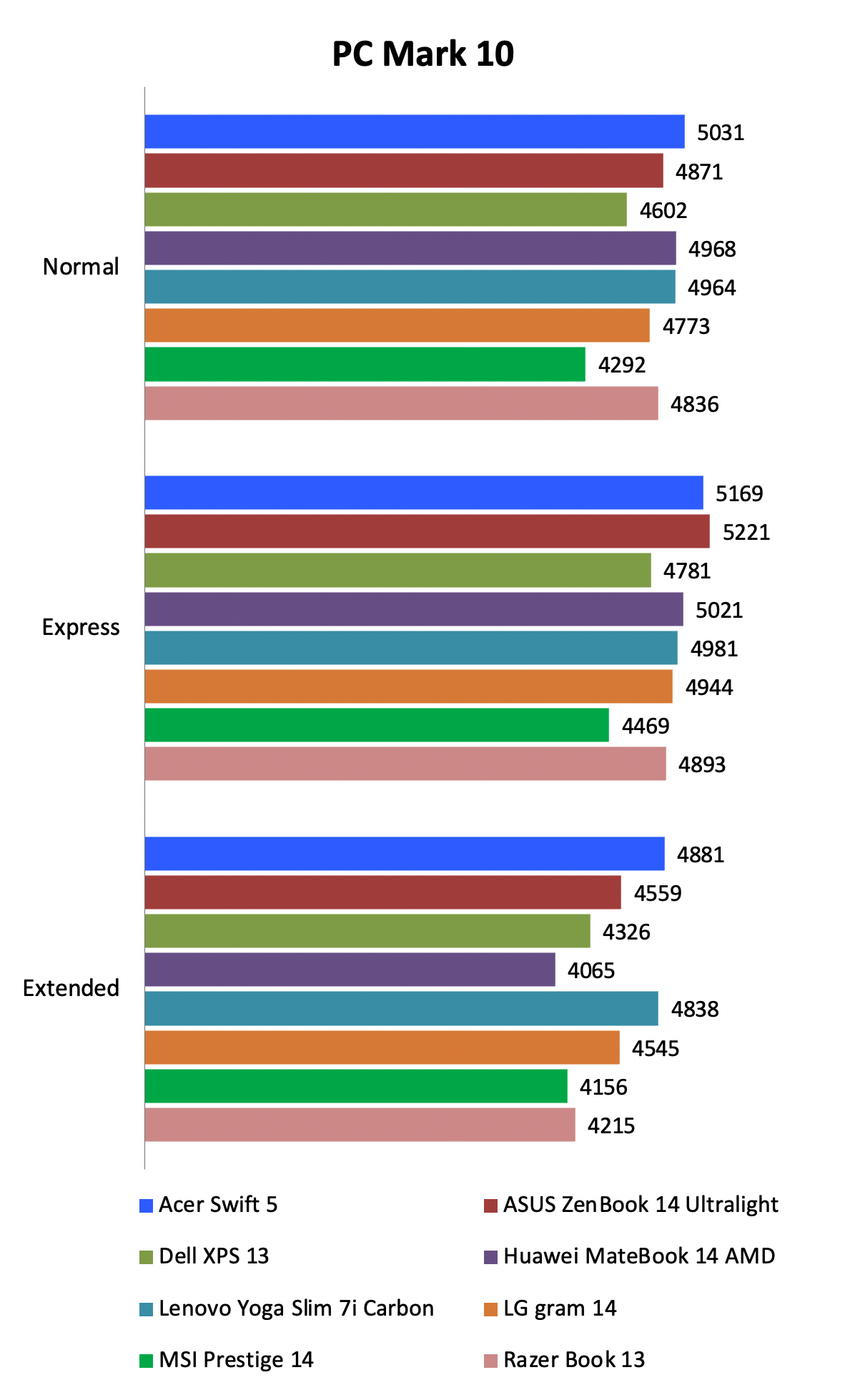 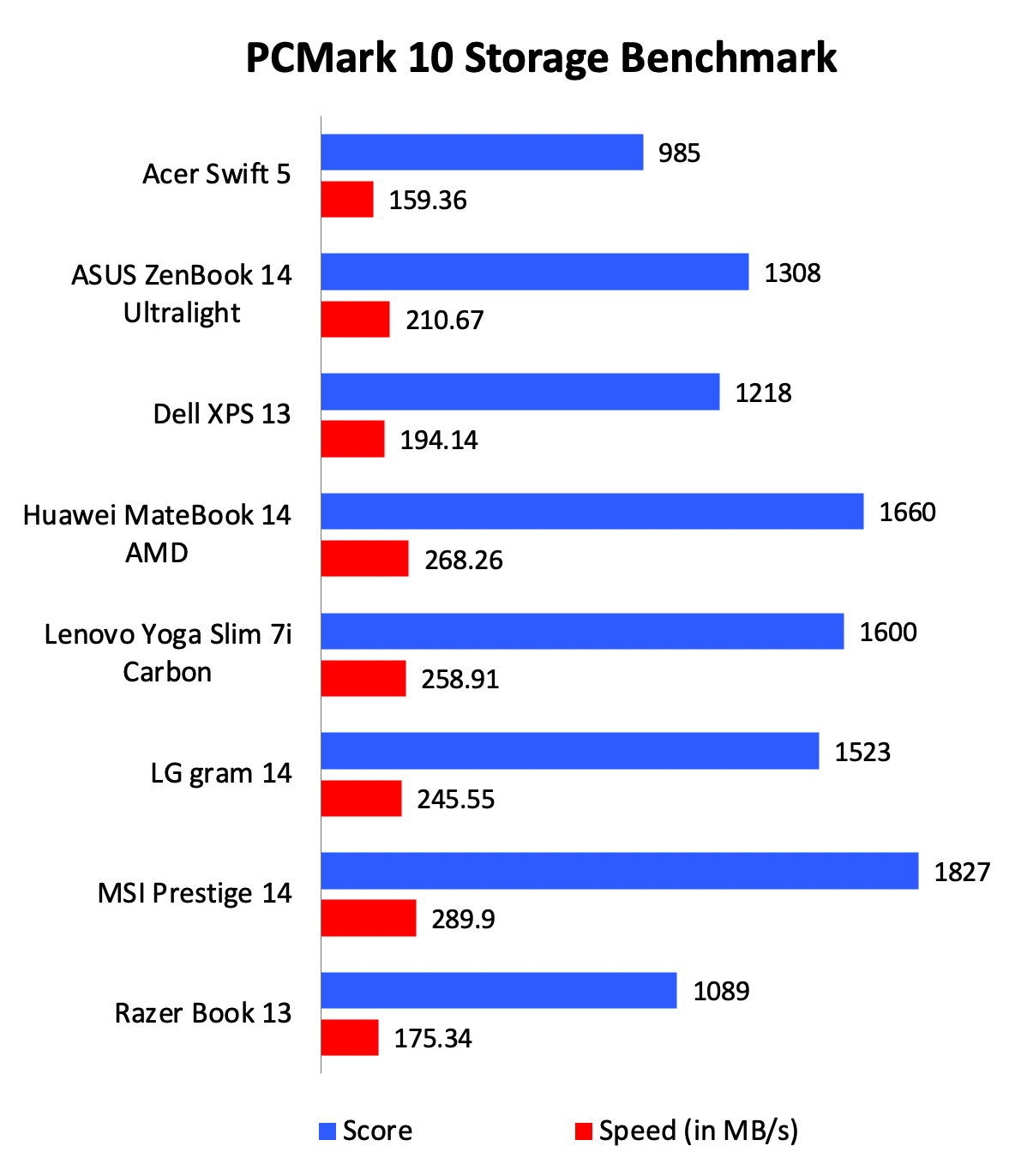 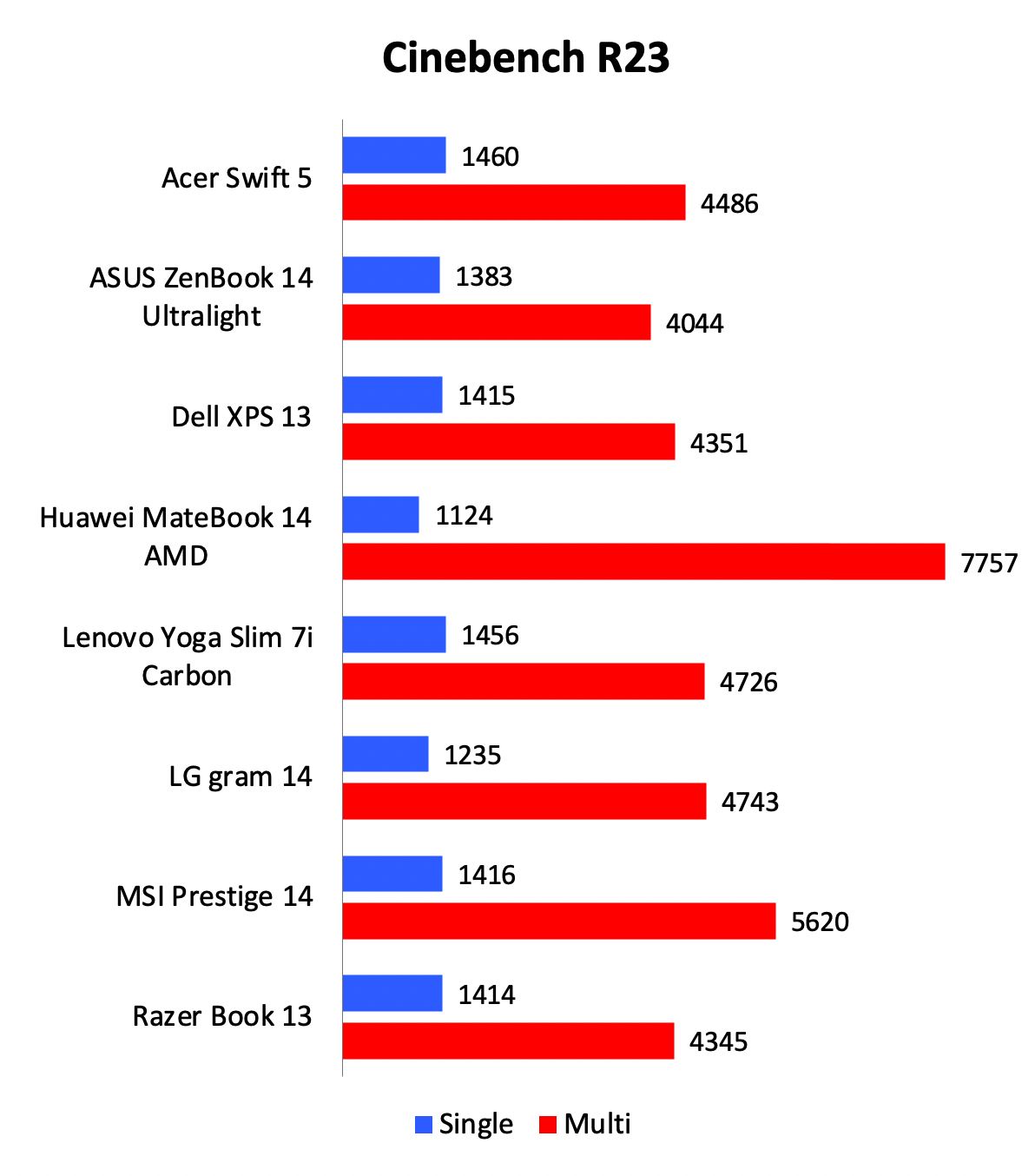 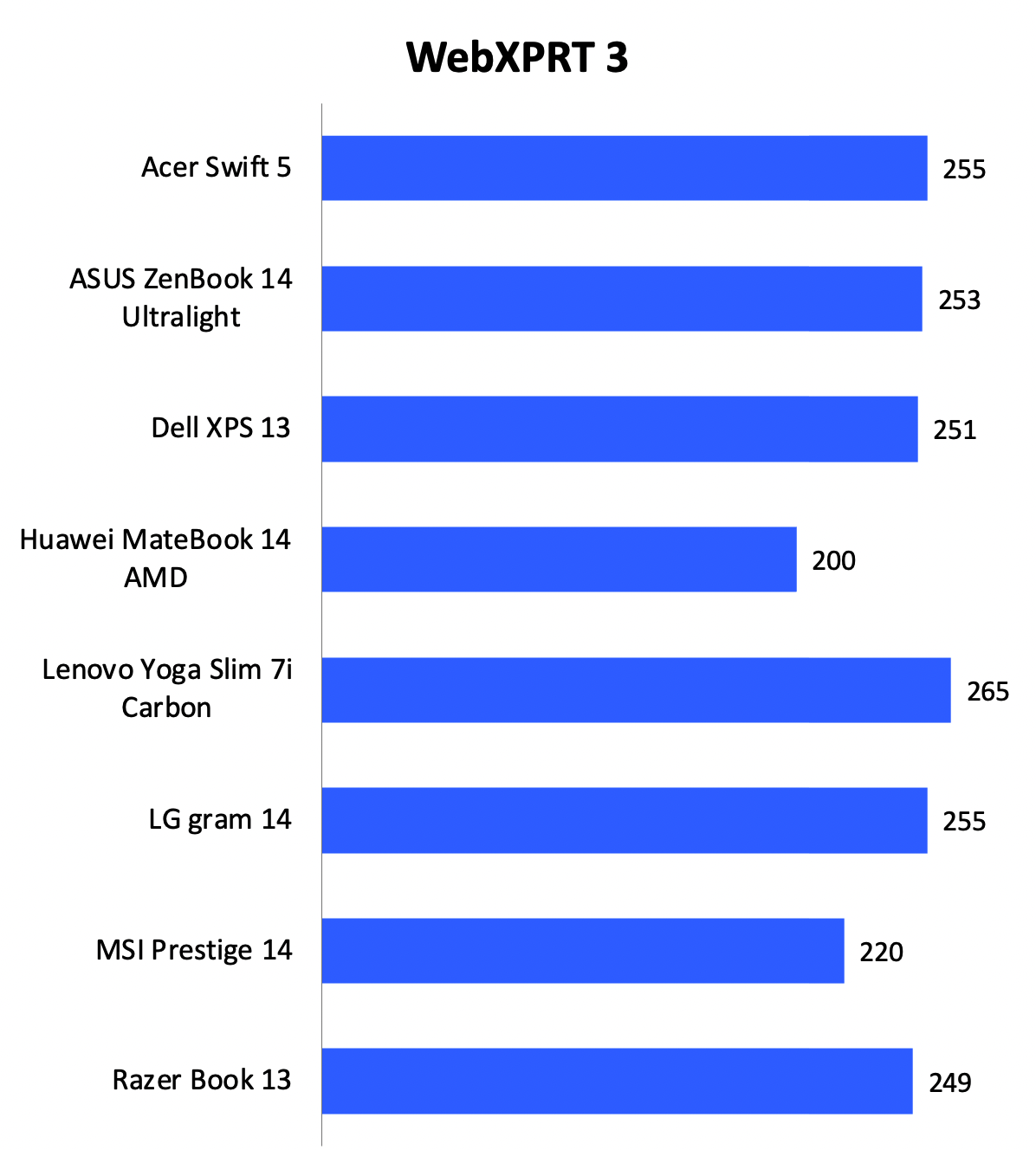 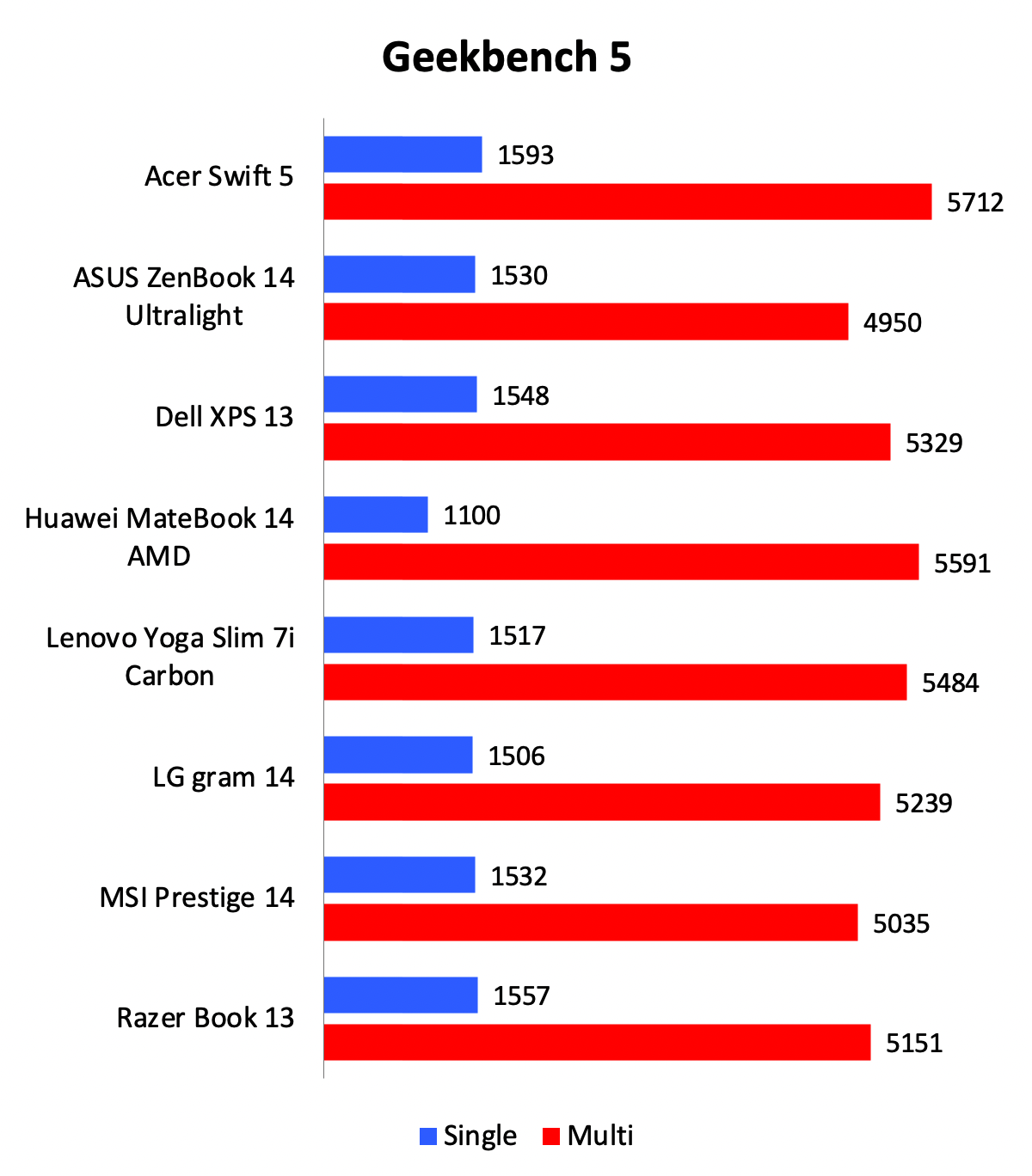 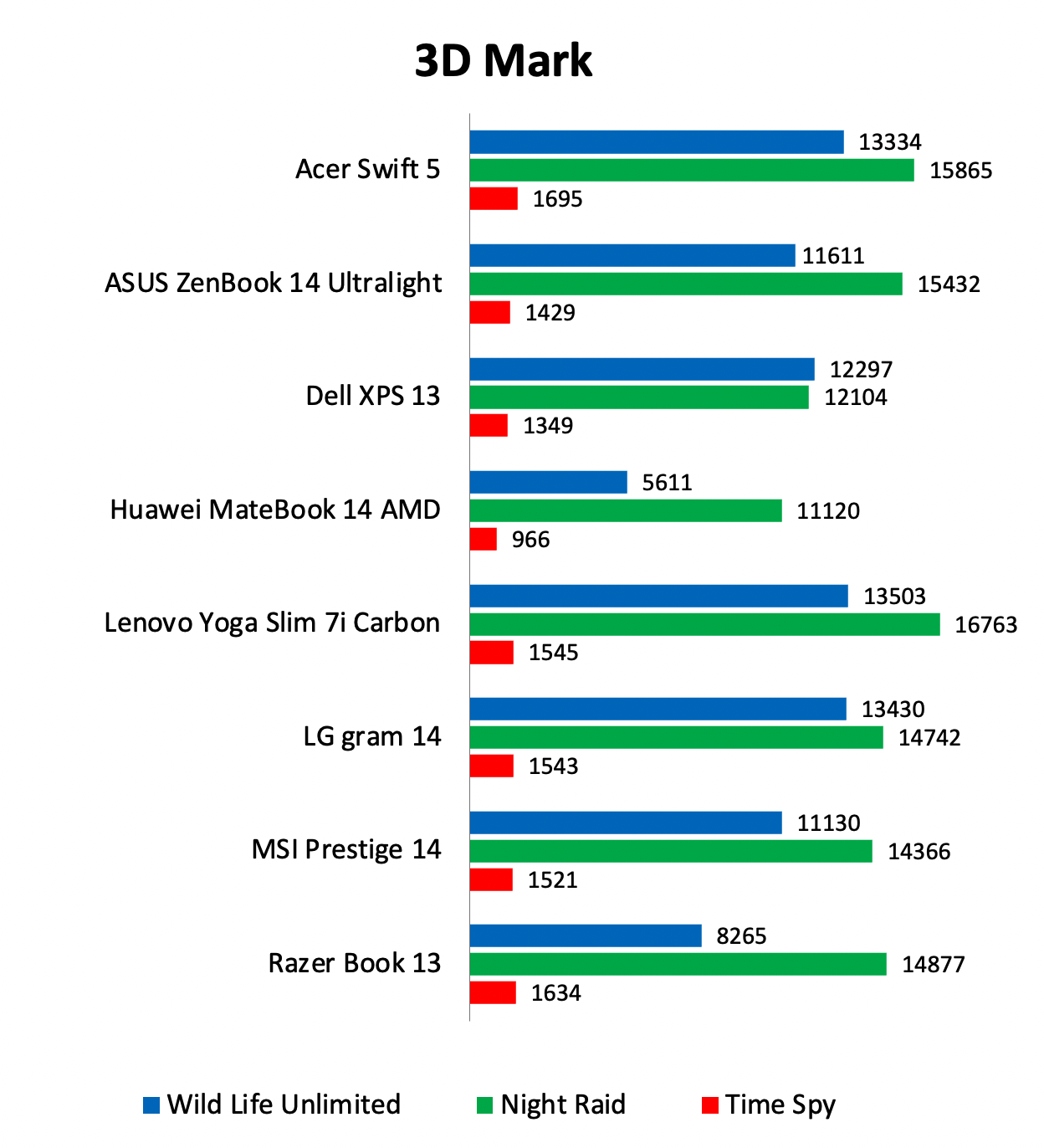 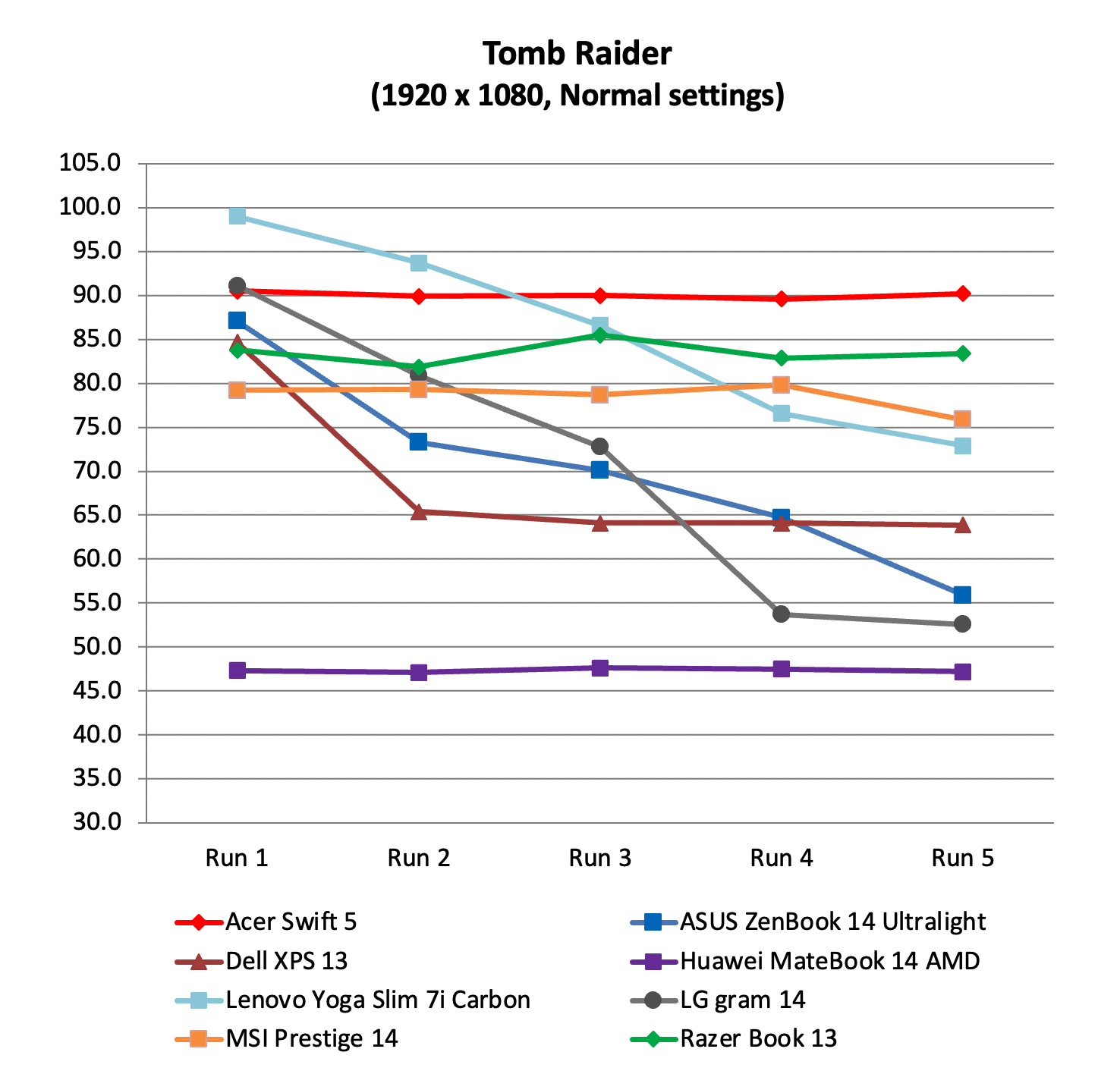 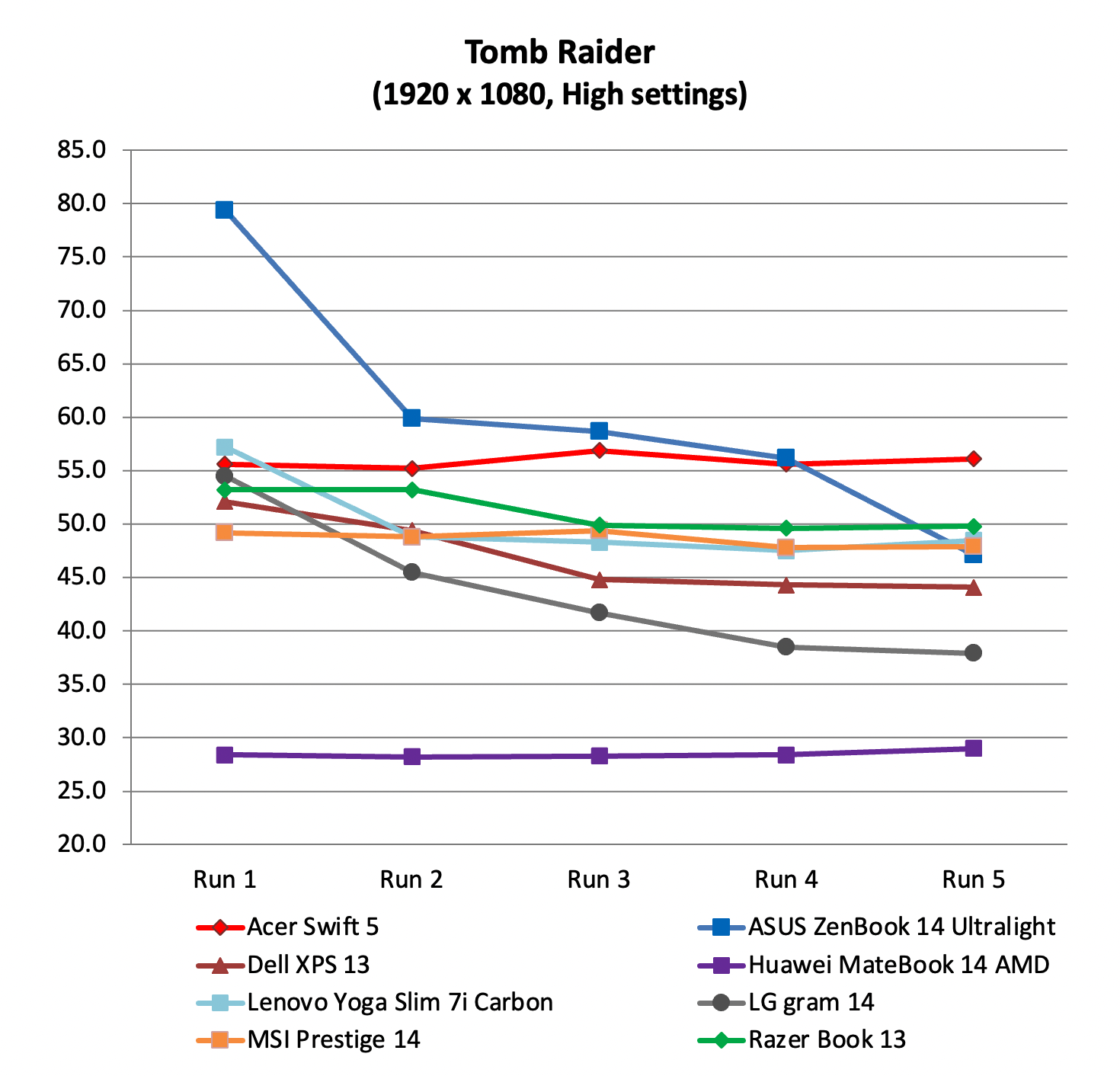 With its large 72Wh battery (largest in its class), the LG gram 14 lasted an incredible 702 minutes which is very nearly 12 hours. Mind you, the test was conducted with the screens at maximum brightness, so if you were to use it at more typical levels, you could feasibly stretch the gram 14's battery life to close to 20 hours. Even when running the more intensive Gaming workload the gram 14 could last over 3.5 hours. 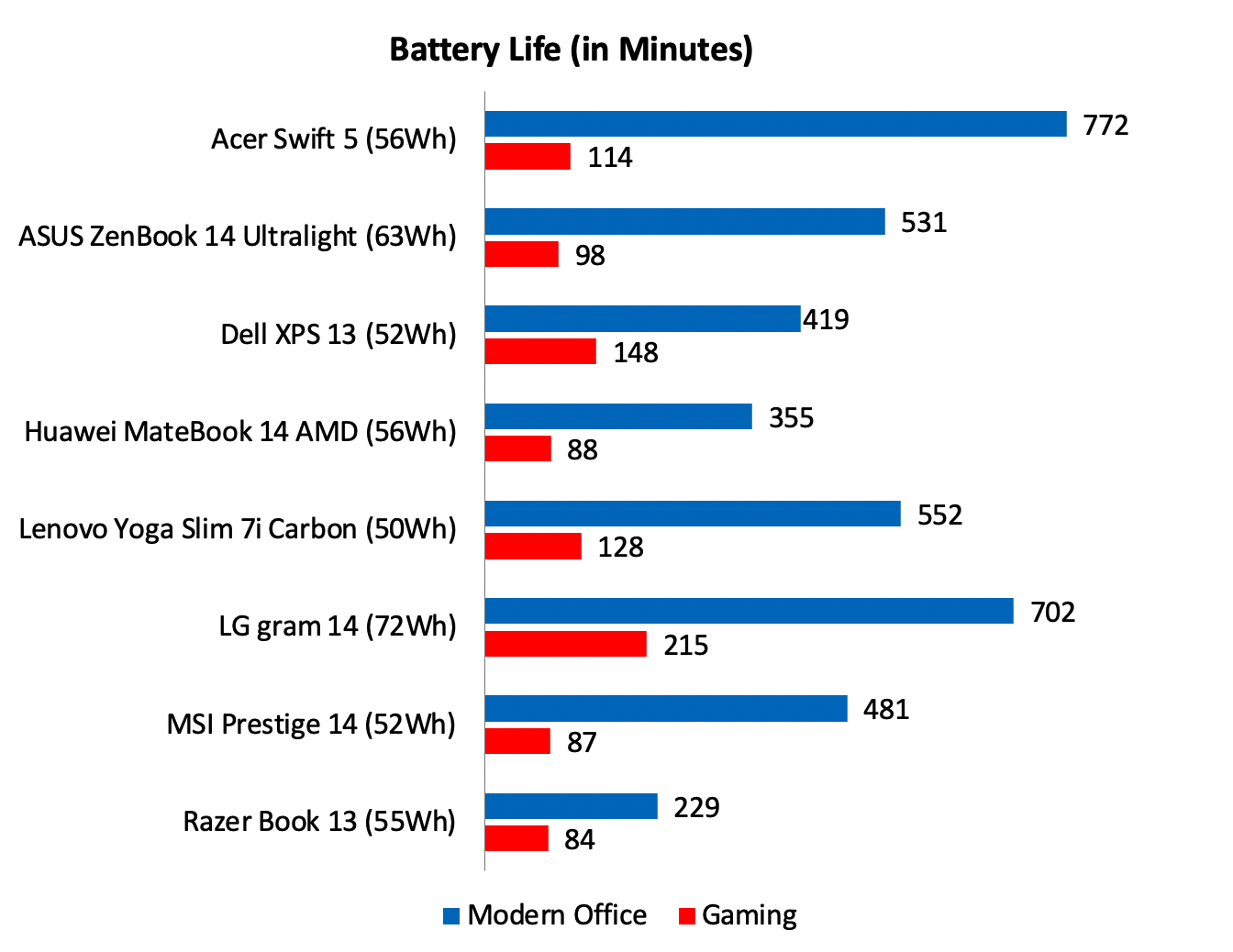 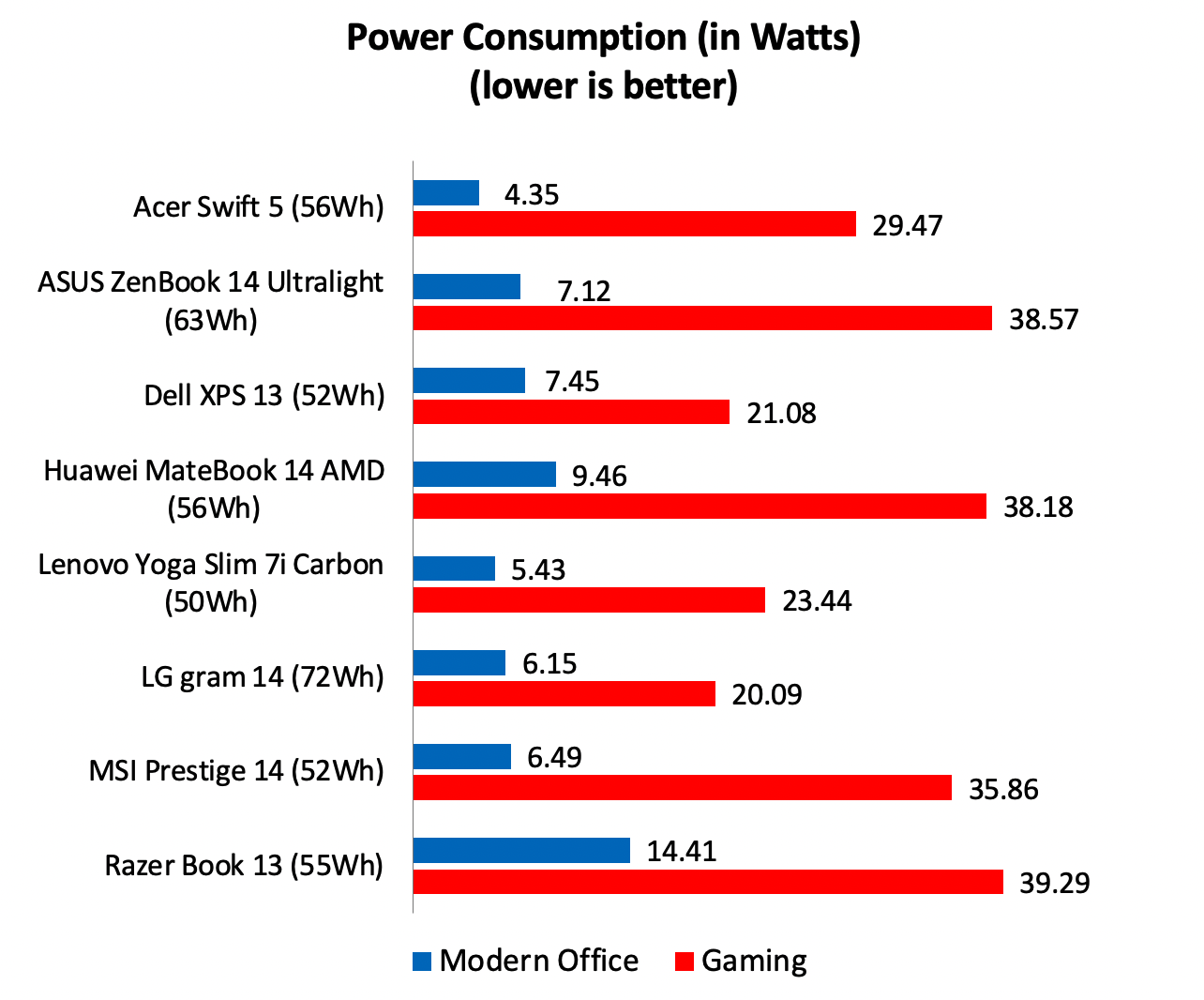 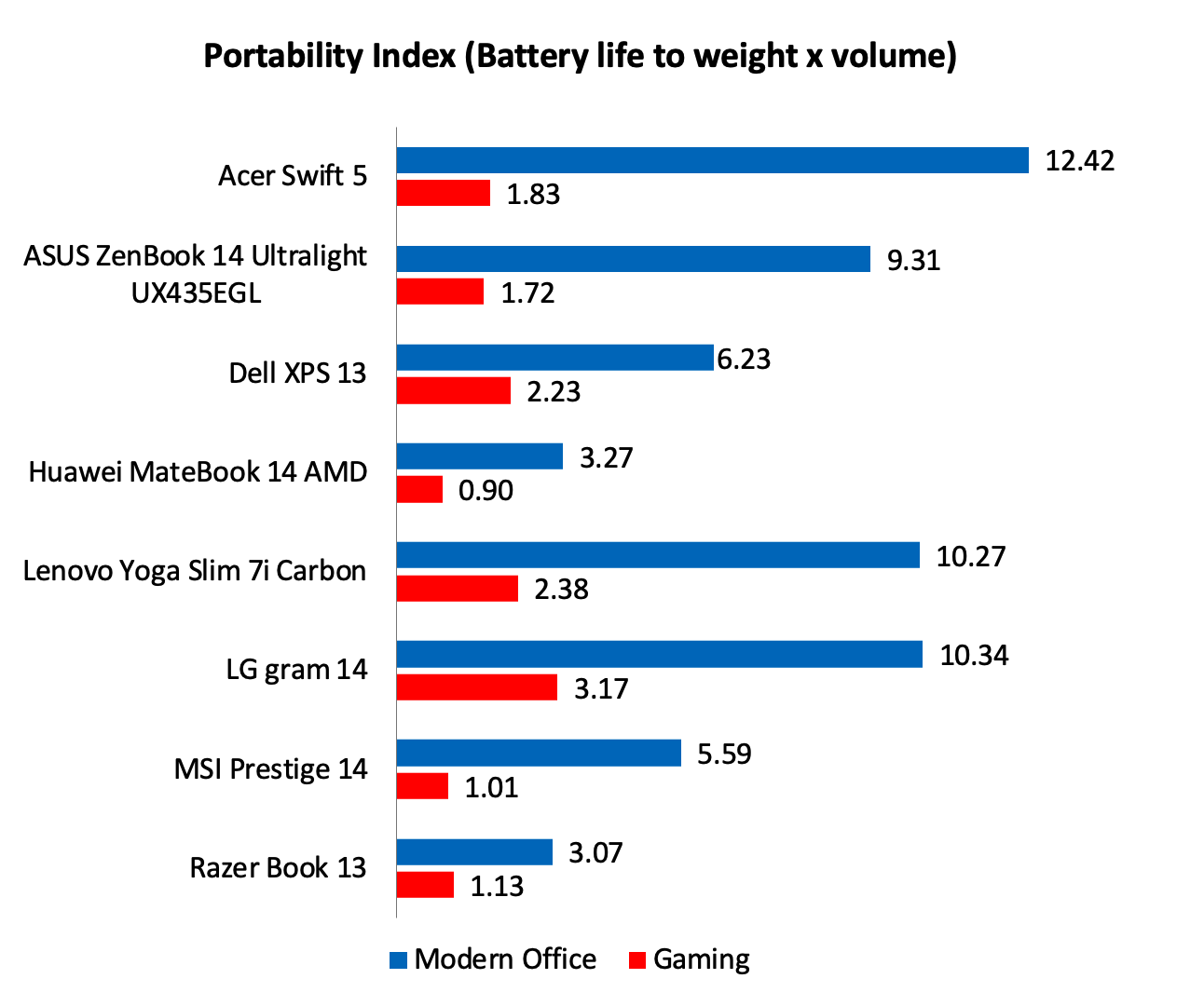 LG decision to focus on lightness and portability when it decided to reenter the market is paying off now. It’s quickly becoming the first name people think of when they are looking for the lightest possible notebook. However, for the past few years, that has come at the compromise of performance.

The latest Z90P 2021 version of the gram 14 ducks this tradition. This new model is easily the company’s most polished ultraportable notebook yet, blending decent performance with incredible battery life and terrific usability. There are lighter and thinner notebooks but they don’t have the ports that gram 14 has and consequently requires their owners to carry dongles. The gram 14, though, has both USB-C Thunderbolt 4 and USB-A ports, and it’s the only notebook in its class to do so. 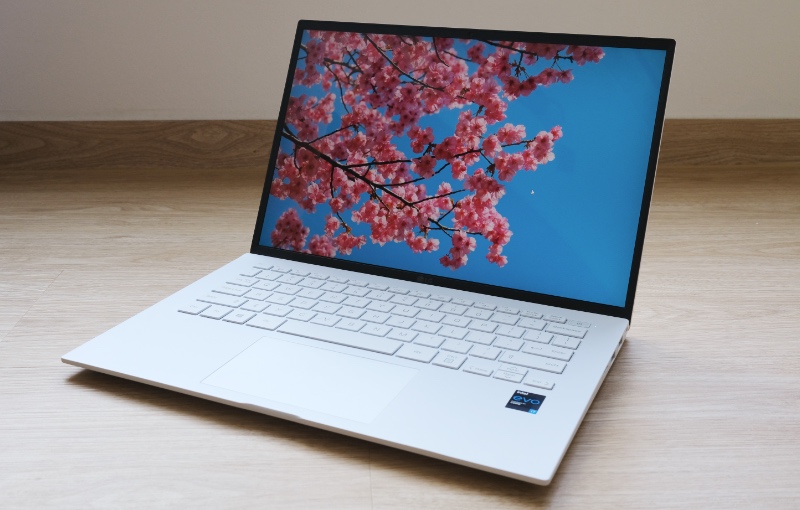 At S$2,199, it's also quite reasonably priced. As it is, my only real gripe with this notebook is that it doesn’t have a higher resolution display nor is the display touch-capable. All in all, this is a very solid option especially if you are looking for a notebook that doesn't require dongles to work, is super light and has great endurance.

You can find the LG gram 14 on the LG Official Store on Shopee here.

Write a Review
Compare This | Specifications
Generally good performance
Good build and very light
Good selection of ports
MIL-STD-810G certification
Impressive battery life
Performance throttling can be quite severe
Keyboard feel slightly cramped
Display resolution could be better
Our articles may contain affiliate links. If you buy through these links, we may earn a small commission.
Sponsored Links