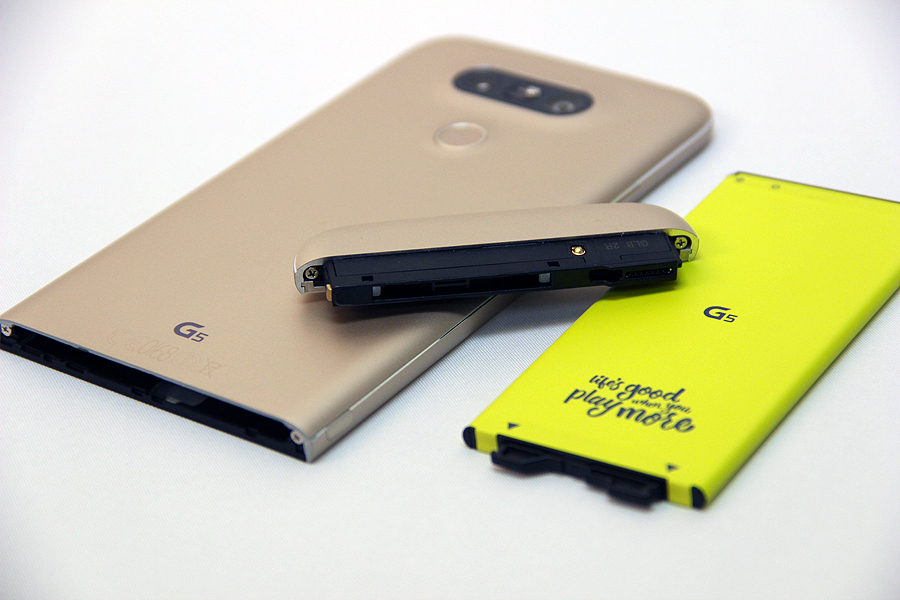 The highlight of the LG G5 is its modular design, which allows the user to swap the phone’s bottom bunk out for other functional attachments. LG is one of the first companies to bring a modular type smartphone into retail at a global scale. With that said, there are modular phones that came before it. Project Ara by Google was one such attempt, but its development is currently delayed. There’s also the Fairphone 2, a commercially available smartphone that claims to be designed for repairability. The detachable lower bunk of the phone can be released by pressing a small catch on the lower-left corner of the phone’s body. When released, the bezel will slide out, and the removable 2,800mAh battery follows through. Understandably, the phone will be turned off until you replace the battery and bezel. It feels like LG decided to make the modular design to have a clever way to replace discharged batteries, instead of it being hot-swappable while you exchange attachments. Removing the battery from the bezel’s latch takes a bit of practice, too. Go slow first, and you’ll master the art of swapping batteries or modular attachments without a hitch. For users who want something unique among readily available smartphones, the G5’s unconventional design is certainly novel and promising. However, having only two attachments available in the foreseeable future with the lack of hot-swapping merely hints at the potential of the modular type design. This particular feature may be one of the biggest things to happen to mainstream flagship phones, but it won’t be game-breaking until LG decides to release more attachments. 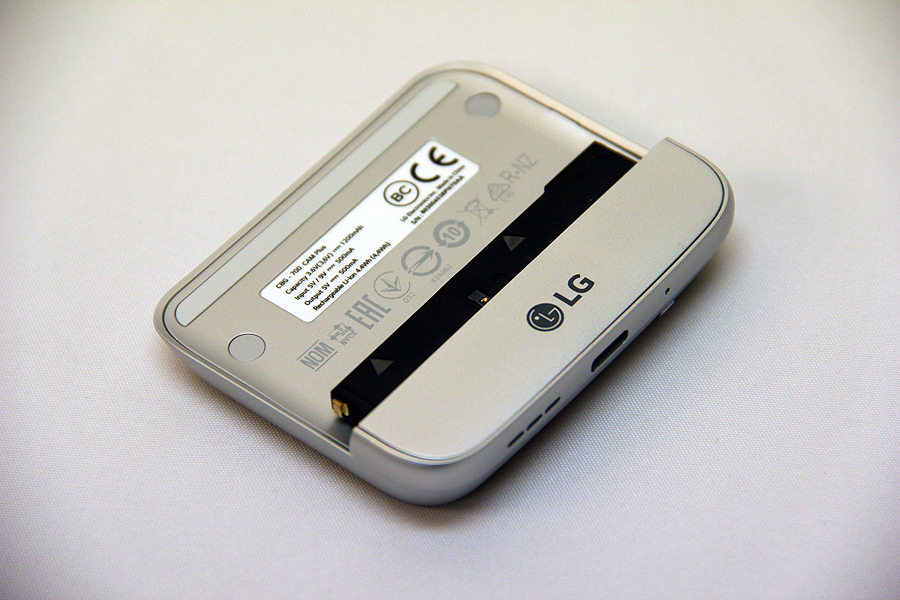 The first of the two available modules is the LG Cam Plus (sold separately at S$158). This is a camera grip module that offers a slew of physical controls for the in-built rear cameras. With the Cam Plus equipped and the phone's screen facing you, you will find a round video Record button and an oblong shutter button at the top. The corner has the zoom dial. Below the dial is a toggle nub for jumping into, or exiting out of the smartphone’s proprietary rear camera app. The grip attachment itself has a 1,200mAh battery, which extends the total battery capacity usable by the phone to 4,000mAh. You can still control the camera from the phone even with the grip equipped. Plugging the entire phone with its grip attachment to its USB Type-C charging cable will disable all of the grip’s controls. While the physical controls are far more tactile than tapping tiny symbols on a phone screen, it is not as ergonomic as a conventional compact camera, and neither does it feel secure when you wield your modified smartphone with one-hand. Even with the attachment adding considerable girth, the workable area is still too narrow for your average hand, and it feels awkward when you ready the phone for a shot. In order to make swift adjustments, you will need to balance the weight of the phone in your opposite hand as you maneuver your fingers along the LG Cam Plus’s controls. On the plus side, the bonus 1,200mAh from the attachment is very handy if you just need a little bit more juice to keep the phone operational during a long day out.

LG Hi-Fi Plus with B&O PLAY The second attachment is the LG Hi-Fi Plus (worth S$298) - a DAC (digital-to-analog) converter for higher quality audio. The attachment comes tuned with B&O PLAY’s sound technology, and it physically features B&O’s Scandinavian design language. It provides 32-bit Hi-Fi DAC upsampling, similiar to the LG V10's integrated audio file upsampling from 16-bit/44.1kHz files to 24-bit/192kHz. LG Hi-Fi Plus also has 32-bit 384KHz high-definition audio playback support. This DAC module can work with non-LG G5 gadgets - when it’s sheathed, you can plug one end into a PC or smartphone using the USB port, and the other end connects to your headphones or in-ear monitors. Unfortunately, we didn't get a review unit at the time of writing, so we can't comment on the Hi-Fi Plus' performance. LG G5 uses Android 6.0 OS (Marshmallow), and a fresh LG UX 5.0 interface. It may be technically new, but you’ll still get all the good ol’ LG conveniences such as KnockCode for securing your phone. The power button doubles up as a fingerprint sensor, and it is fast and reliable for unlocking the device. LG UX 5.0 itself has new add-ons too, such as a File Manager for accessing your phone’s contents using a directory tree, and LG Friends Manager for connecting to LG Friends - a range of LG G5 companion devices. It also comes with 32GB internal storage, and it’s expandable via microSD card (up to 2TB). LG G5’s 5.3-inch screen has a neat feature that’s also available on its rival’s 2016 flagship phone - the Always-on Display (AOD). To recap, an AOD allows you to check the time, date, battery status, missed calls, and other notifications - even when your phone is idle and locked. According to LG, the G5’s AOD uses merely 0.8% of the phone’s battery capacity every hour. LG’s AOD shows you notifications from a variety of apps - not just unread SMS messages. If you’re expecting an e-mail or a message from a different app, this phone’s AOD shows you the pending notification below the date. However, the AOD is less bright than the Galaxy S7’s AOD. At a typical office desk, you’ll have to place your LG G5 at an angle optimal for your line of sight, without the glare from your artificial lights above. The AOD is still sufficiently visible under direct sunlight.

The AOD allows some customization, but you’re only limited to a time/date display or a screensaver with your signature. It’s less fancy and varied than the Samsung’s spread of AOD templates, but LG’s AOD feels more practical in comparison since it includes a wider spread of notifications. If you don’t like AOD itself, you can always turn it off in the settings.

Update (8th April 2016, 6.04pm): LG has informed us that a future software update will include App Drawer as an option within the settings. 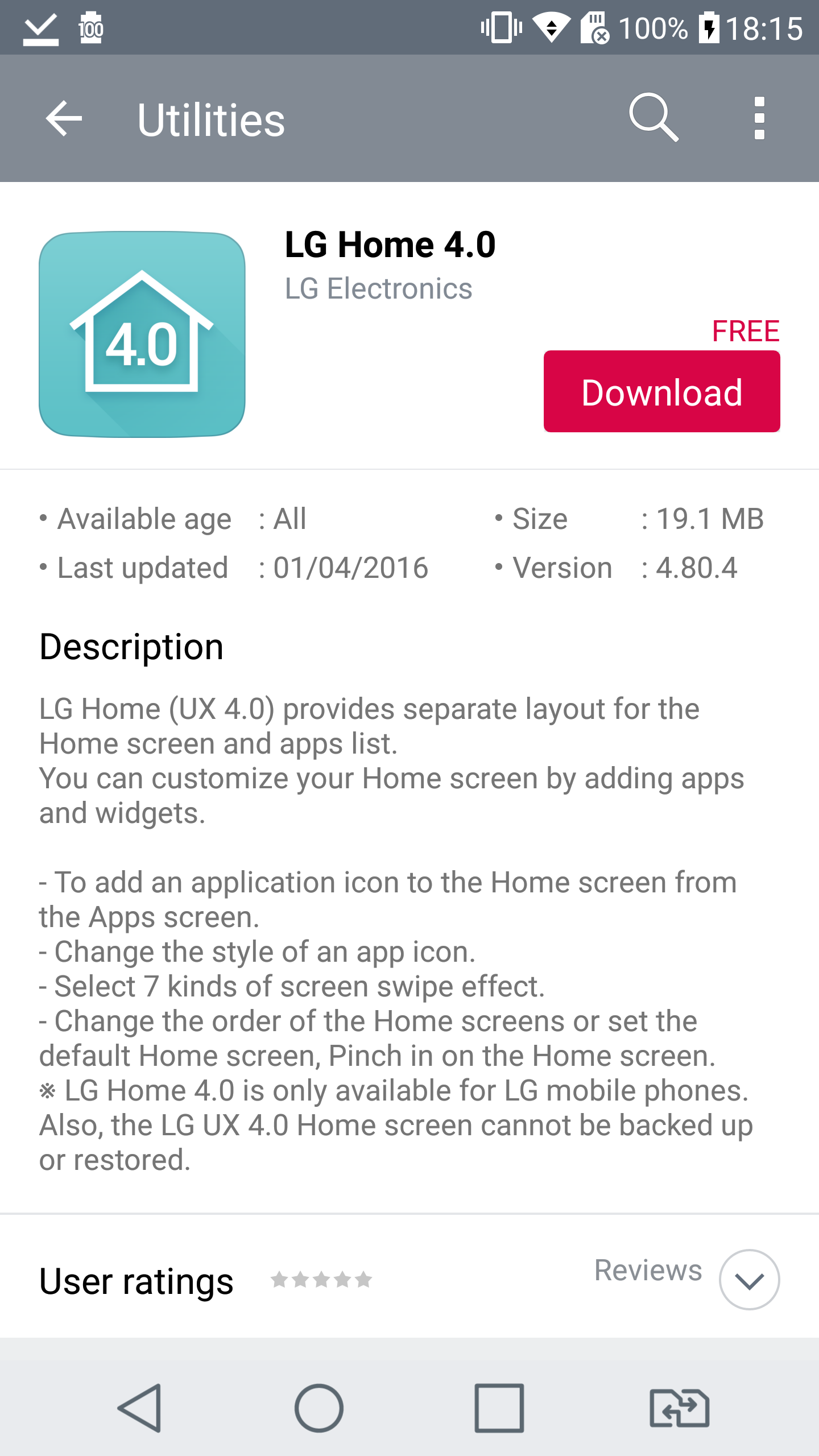 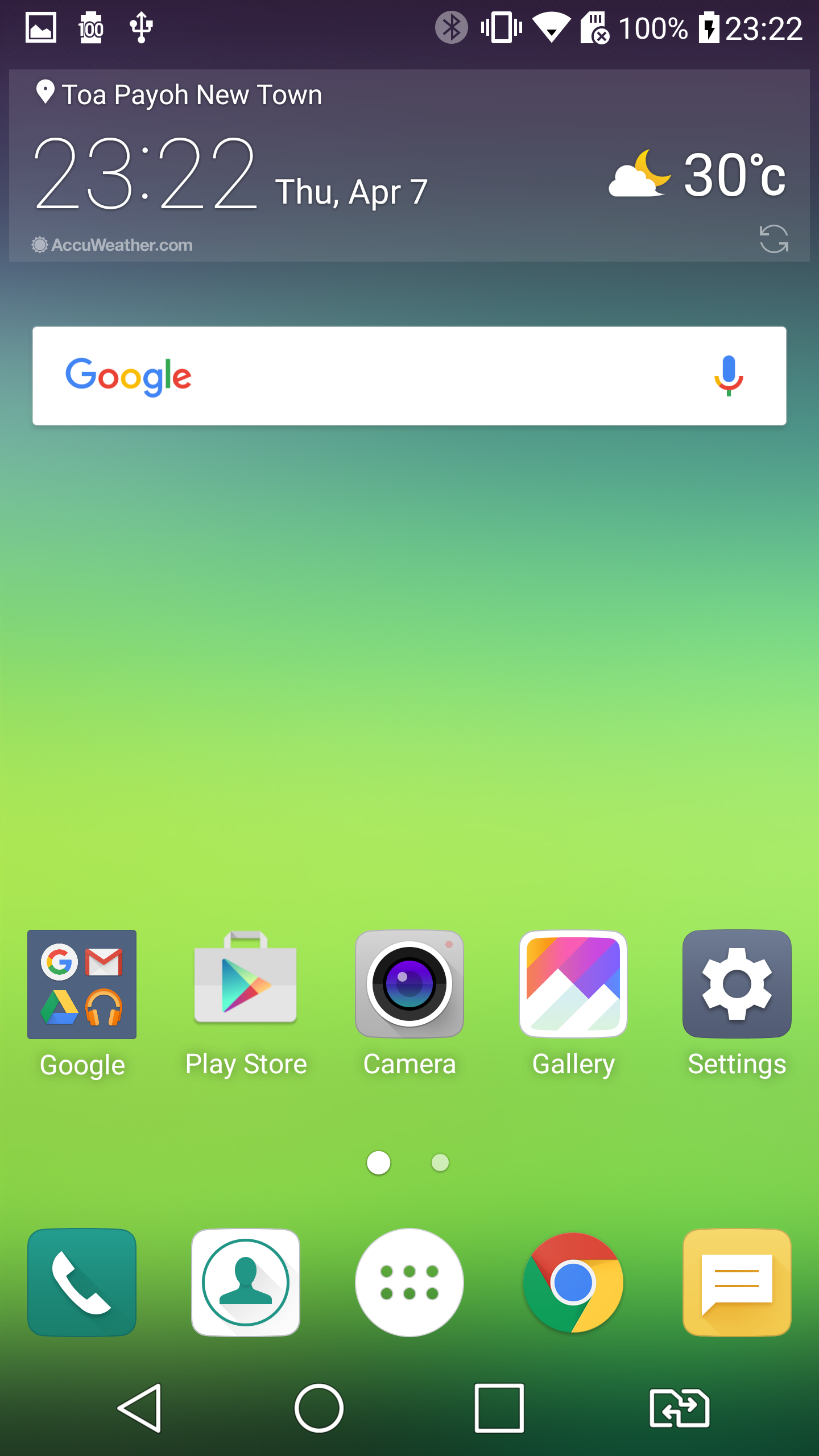 The App Drawer is an optional add-on for the LG G5, and it is ideal for users who are familiar with Android OS, or if they install numerous apps on their LG G5. App Drawer can be downloaded via LG’s proprietary SmartWorld app store (the app name is LG Home 4.0). Once the download has completed, you will need to go into Settings > Display > Home Screen > Select Home to choose the App Drawer home screen layout. The default UX 5.0 comes with a Home interface that doesn’t do widgets or app drawers, which is also fine if you like tidy home screens and if you don’t install that many apps. What’s puzzling is LG’s decision to make users jump through hoops just to install the App Drawer, as opposed to leaving it as an option within the phone's settings.