LG announced the G Tablet 8.3, also known as the G Pad 8.3 outside of Singapore, a week before IFA 2013. It is part of the premium G Series devices that LG is positioning as an equal to the HTC One family, Samsung Galaxy branding and Sony's portfolio of Xperia devices.

The other members of the G Series (Optimus G Pro, G2 and G Flex) showed great potential during our reviews and we expect similar results from the G Tablet 8.3. In some ways, it has already outdone its rivals by being the first Google Play Edition tablet. So what makes the G Tablet 8.3 so appealing to Google that it is the first Google Play Edition tablet? Is it as good or even better than the Google Nexus 7 (2013)? Read on to find out more. 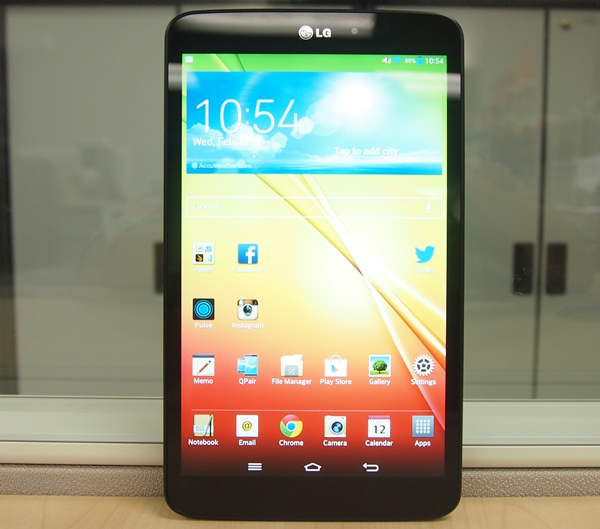 LG is moving in a direction similar to what Apple, Samsung and Sony have been doing for the past few years - maintaining a distinct look across its portfolio of mobile devices and differentiating them with certain, deliberate design elements.

Having said that, the G Tablet 8.3 looks like a bigger G2 variant without the ultra thin bezel and glossy black plastic rear. Its rear has a canny design resemblance to the Apple iPhone 5/5S, where there is a metallic plate in the middle with accents of a different color tone at the top and bottom of the phone.

The G Tablet 8.3 seems and feels very well-made thanks to the brushed metallic rear. In fact, LG did a very good job this time as the G Tablet 8.3 is better built than most of its rivals except the Apple iPad Mini with Retina display. 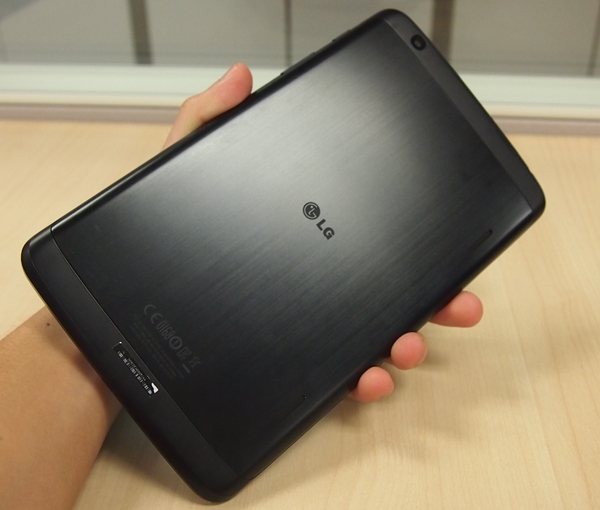 We can also see the design team paying particular attention to the placement of the speakers on the rear of the G Tablet 8.3 to avoid a situation where your hands might muffle the speakers (you can just barely make out the placement from the above photo). As noticed in the above photos, the official usage orientation of the G Tablet 8.3 is in portrait mode as denoted by the brand placement on the front of the device. In this orientation, the speakers are found on the top left and bottom left. This might seem odd, but once you shift to landscape mode to enjoy videos, you'll appreciate that the speaker vents are now either on the top or bottom length of the device (depending on which direction you swiveled the device). In either orientation, whether you're a left or or right-handed user, your hands wouldn't be blocking the speakers. The only downside is that in portrait mode, audio output is left-biased due to the speaker placement, but that's a design choice LG made to give you an optimal move viewing experience. Perhaps it's time that tablets come equipped with multiple speakers and the appropriate stereo speakers come in to play based on your display orientation, which is easily taken care by the device's built-in gyroscope sensors.

You will find the power button on the top of the device's right profile and below it are the volume controls. LG has yet to implement the rear button setup that we saw on the G2, G Flex and the G Pro 2. As noted in the review of the 6-inch G Flex, we find the rear button setup to be more practical for a larger form factor and we wonder if LG will eventually integrate this for its compact tablet devices. As for the 3.5mm audio output jack and microSD memory card slot, they can be found on the top left corner of the device. There is no slot for a data SIM card as the G Tablet 8.3 is a Wi-Fi only model. 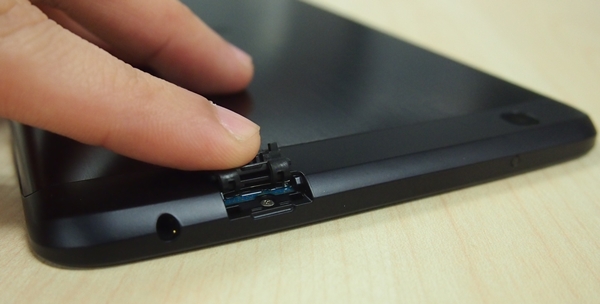 The front of the tablet is dominated by the 8.3-inch IPS display with no physical buttons. Like all non-Samsung Galaxy tablets, the G Tablet 8.3 relies on software buttons for navigating the interface. This helps to keep the front of the device clean and sleek.

Weighing at 338g and measuring 8.3mm thin, the G Tablet 8.3 finds itself in the middle ground when compared to its peers. It is also quite tall for a tablet of its class at 216.8mm, which makes it top heavy if you happen to handle it at the bottom edge. This is probably another reason why we feel users will generally hold the tablet in the middle where the rear speakers will not be covered. 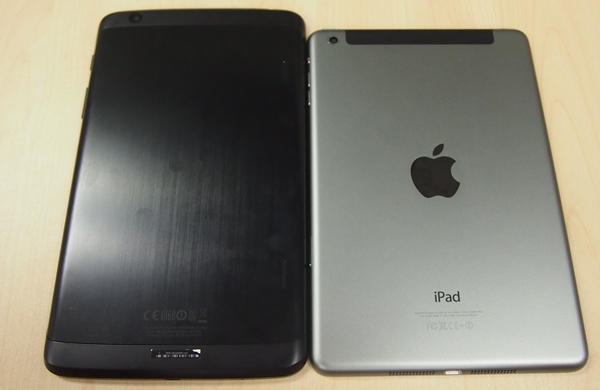 Even though the G Tablet 8.3 does not inherit the insanely thin bezel of the G2, its bezel is still relatively thin compared to the Apple iPad Mini with Retina display. This may pose some usability issues when you rest your thumb on either side in portrait mode.

During our testing with the G Tablet 8.3, we noticed that the tablet does not come with a software feature to reject unwanted and unintended touches on the sides of the display. A check with LG Singapore also confirmed the same. It's a pity it doesn't feature this technology because such a feature is present on the two generations of iPad Minis and it works most of the time in ensuring that accidental touches do not taint the user experience.

LG is fond of introducing unconventional screen sizes for its mobile devices and this tablet is following in the footsteps of the 5.2-inch G2. As the name suggests, it has a 8.3-inch display with a resolution of 1,920 x 1,200 pixels.

While the Google Nexus 7 (2013) also comes with a Full-HD display, the G Tablet 8.3 is the first to have it in an 8-inch form factor. Due to the difference in screen sizes, the Nexus 7 (2013) actually boasts a higher pixel density at 323ppi. Here's a quick look at the display resolution of the different tablets compared:

If these figures are not your cup of tea and you only care about the actual viewing experience, you can be well assured that the G Tablet 8.3 has one of the best displays we've seen so far. Colors are rich and vibrant, the blacks are deep and the contrast is good. As it uses an IPS panel, viewing angles are excellent if you were to use the tablet in an off-axis position. This is great for sharing a screen between friends and for casual laid-back usage where you're not viewing the display perpendicular to the screen.

The interface of the G Tablet 8.3 will be familiar to anyone who is using or has used LG's recent mobile phones. As such, the usual suite of software features such as Slide Aside, Q Slide, KnockON. QuickRemote, QuickMemo are present on the tablet.

One particular feature, which makes more sense on a tablet than a smartphone is Q Slide. It is a multitasking feature where you can open up to three different apps as small windows on the same screen. You can then move, resize and change the transparency of the app windows according to your preferences. Here's a video demo of it when we first trialed it on a smartphone.

As the the tablet has a larger display, resizing three app windows is more practical than on a smartphone. The only drawback of Q Slide is the limited number of apps that can be used.

First introduced in the G2, we are also glad to see KnockON on the G Tablet 8.3. KnockON lets you turn on and off the screen by double tapping the center of the display. This is very convenient as you do not need to reach out to the power button on the right side.

Unlike Nexus devices, LG offers you the option to select the combination of touch buttons that suits your needs. There are a total of 8 combinations to choose from, most of which have one or two more buttons added alongside the standard back, home and menu buttons.

Unique on the G Pad Tablet 8.3 is the QPair app. In lieu of of mobile data connectivity, QPair pairs the G Pad Tablet 8.3 with an Android smartphone via Bluetooth. Call, message and social network notifications will then be synchronized on both devices. For example, you can reject a call or read and reply to text message on the G Tablet 8.3. Social network notifications will appear on the status bar of the tablet. This is very thoughtful and useful as you don't have to shuffle between devices to get these basic tasks done if you're busy with your tablet. QPair can be downloaded for free from the Google Play Store and should be supported on most Android smartphones running version 4.1 and above.

In addition to message and call management with QPair, notes created on LG's QuickMemo are saved in the Gallery on the LG smartphone and tablet. You also have one-click tethering connection between the two devices so that you no longer need to spare extra time to turn on the Wi-Fi hotspot through layers of menu settings.