The G Pro 2 is powered by the Qualcomm Snapdragon 800 quad-core 2.26GHz processor and 3GB RAM. It's strange that LG chose the Snapdragon 800 processor instead of the newer 801 chipset that is used in the new Android flagship smartphones such as the Samsung Galaxy S5 and Sony Xperia Z2. Given our past experiences with LG's product managers, the reason could likely be down to the point of when LG chose to qualify the G Pro 2 device months ago and it had to do so based on what was available during its preliminary design and testing phase which LG prides itself to produce quality products.

We will be comparing the G Pro 2 against the other phones of its class which it competes against. The list will include the HTC One Max, Huawei Ascend Mate, Nokia Lumia 1520, Oppo N1, Samsung Galaxy Note 3 and Sony Xperia Z Ultra.

The G Pro 2 held its own against the other Snapdragon 800-touting phablets (G Flex, Galaxy Note 3 and Xperia Z Ultra) although Samsung's performance seems to be better due to the artificial tweaking of its CPU.

The One Max and N1 use the older Snapdragon 600 processors, which explains why their benchmark scores are far lower. As a point of reference, the Optimus G Pro has a score of 11662 in the Quadrant benchmark. 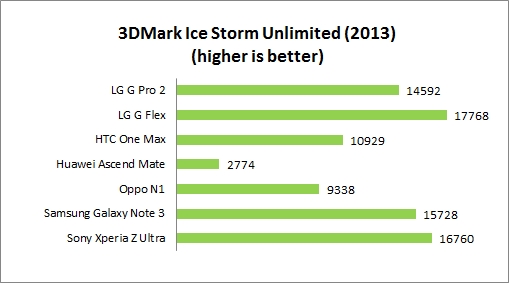 Without other factors affecting the outcome, the performance of the G Pro 2 is almost on-par with the Galaxy Note 3 and Xperia Z Ultra. The Optimus G Pro scored 7965 in the Ice Storm Unlimited, which mean the successor has double the graphics prowess. Oddly though, it couldn't outrun its own G Flex smartphone.

The performance of the G Pro 2 in the SunSpider Javascript benchmark is expected, although the Lumia 1520 has a lead over its Android counterparts.

Putting benchmark scores aside, the G Pro 2 delivered an overall smooth user experience. The interface navigation was snappy and multitasking was a breeze.

Although the imaging sensor is still a 13-megapixel unit, the G Pro 2 adds optical image stabilization plus (OIS+) and a host of new software features to enrich the photo-taking experience. First up, here's how good its imaging quality is:- 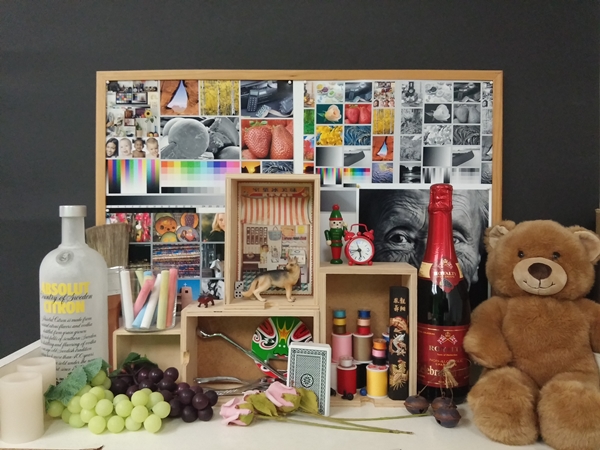 What makes OIS+ different from the hardware-based OIS on the G2 is the addition of digital imaging stabilization such as modified automatic exposure, noise reduction, frame per second functions and frame selection algorithm to compensate shaky hands by 20% compared to the G2. How effective is it? Here's a preview of it image stability from a quick video we shot at Barcelona at MWC 2014:-

The G Pro 2 is also capable of 120fps HD and slow motion video recording. You can playback the videos in three speeds:1/2x, 1/4x or normal.

Magic Focus enables you to select the preferred depth of focus after you have taken a shot. You can either choose a particular section of the photo to focus or press the all-in-focus icon to make every object in the frame look their sharpest. For Magic Focus to work properly, you have to hold the camera very still as the camera will take multiple shots at one go. As such, it's not suitable for moving shots. Depending on your situation, holding really still may not be an option for you; as such, your mileage with this function will vary. Below are some screenshots to show the Magic Focus in action: 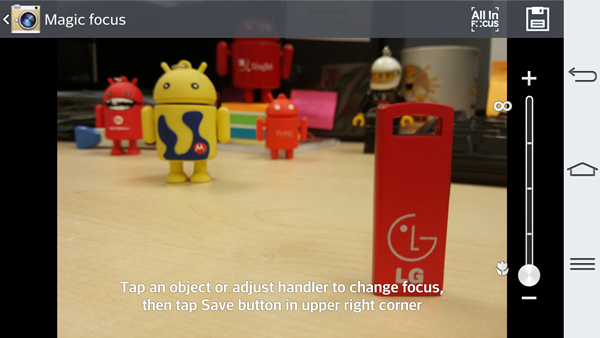 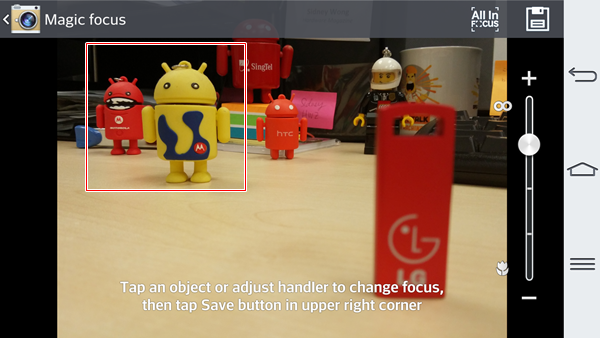 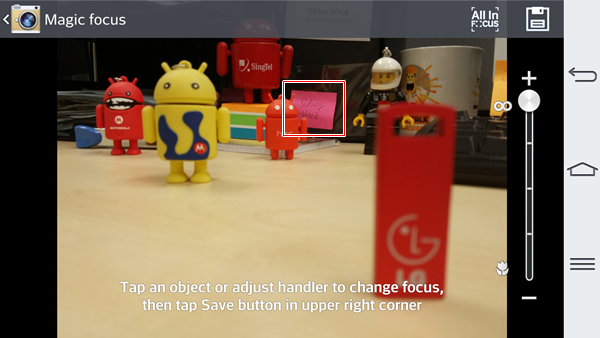 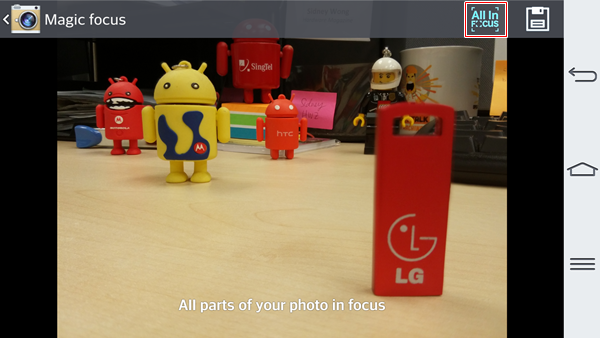 Last but not least, here's a video of this feature in action from our trip to MWC 2014 in Barcelona:-

The G Pro 2 managed to last 7 hours and 29 minutes in our video test. This is shorter than the HTC One Max (10 hours and 26 minutes) and Oppo N1 (11 hours and 7 minutes), which have similar display sizes at 5.9-inch. The slightly bigger batteries in the HTC and Oppo phablets should explain for the difference in battery uptime.

In case you are wondering why the G Flex and Ascend Mate could last longer despite their larger displays, both phablets sport 720p displays which require lesser power to light up compared to a 1080p display. In addition, both phablets have larger batteries.

Compared to the Optimus G Pro, the G Pro 2 marked a significant improvement in terms of battery performance as it is able to last about an hour and a half more. Its power consumption is also lower despite having a bigger display with higher resolution. Despite the great strides the newcomer has made, it's overall battery life performance is just about average.

We measure the portability of a device by calculating its battery life to (weight x volume) ratio. As the G Pro 2 has one of the slimmest and lightest form factors of the lot, it is ranked ahead of its rivals in the Portability Index even though its battery mileage could not match up to them.

But benchmarking gives only one view to the above assessment. To give you a more realistic understanding on how the G Pro 2 fared under real world usage conditions, we included screenshots of the usage and history graphs based on our usage.

As seen from the graphs above, the LG G Pro 2 could last close to 25 hours before the battery hit 5% . Screen-on time is about 4 hours and 6 minutes. Some notes:

Do note that battery mileage varies depending on your usage patterns. We noticed that the battery percentage dropped quite rapidly when we were using WhatsApp. If the phone was used with a 4G SIM card, we reckon the battery mileage to be shorter. Thankfully, you have the option to buy an additional battery to swap if you are a heavy user and not have access to a power outlet to charge the depleted unit.

The G Pro 2 stands out from the crowd with its rear button setup, which is practical and offers a better handling than similar or bigger-sized phablets. It also has an excellent 5.9-inch Full-HD display and a 13-megapixel rear camera that delivers good image quality.

LG has made great progress in boosting the battery performance of the G Pro 2 over its predecessor, although there is room for improvement. Unlike HTC and Nokia, LG developed specific software features (Dual browser, Mini View and KnockCode) to maximize the use of the large display. Overall, its interface also looks less cluttered from that of TouchWiz on the Galaxy Note 3.

On the flip side, LG doesn't seem to boast a killer feature for the G Pro 2 that can rival or better some of its close rivals. Its rear button setup makes sense for us, but there are consumers who may find it awkward. Furthermore, LG and the other brands have yet to develop a compelling alternative to the S Pen functionality found on the Galaxy Note devices. In some sense, it's an oversight on LG's part as the G Pro 2 may not be enticing enough for consumers who require excellent productivity and entertainment on a single device, which is the very reason why phablets exist in the first place.

Nonetheless, the LG G Pro 2 get a solid recommendation from us for consumers who don't need a stylus and related functionality such as that offered by the Samsung Galaxy Note 3. More than ever, LG has a better shot at Samsung's throne in the phablet space this time round, but in today's highly competitive market, being second best is not an option.

The LG G Pro 2 is available for purchase from March 29 at a recommended retail price of S$828 (without line contract and inclusive of GST). Two colors will be available at launch: Titan (black) and white. There's even red model, but that will be launched at a later date.

Write a Review
Compare This | Specifications
Overall smooth performance
Good imaging quality
Ergonomic rear buttons
Better handling than other phablets
No standout or killer feature
Battery life could be better
Our articles may contain affiliate links. If you buy through these links, we may earn a small commission.
Sponsored Links