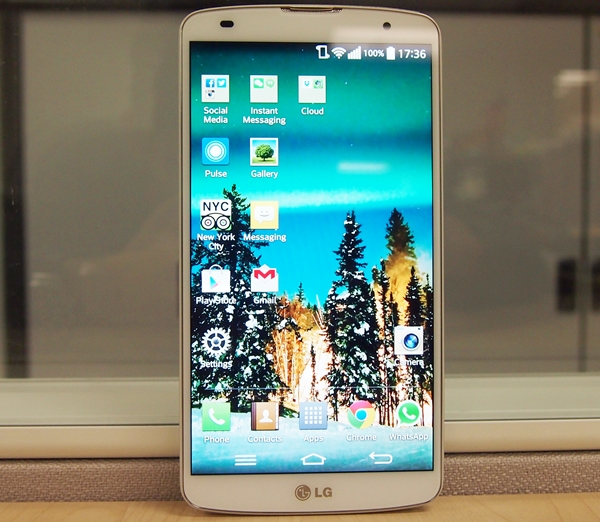 With the phablet market forecasted to hit 120 million shipments by 2018, LG is entrenching itself as a key player in the market. The latest G Pro 2 will succeed its first phablet, the Optimus G Pro and fight for a larger slice of the pie.

There was a lot going for the Optimus G Pro; it was one of the few 5.5-inch phones at that point in time to sport a Full-HD display and the overall performance was smooth. However, it stopped short of being a show stopper due to its late market availability and below average battery life.

Will the G Pro 2, with its suite of hardware and software upgrades, be able to make a bigger splash than its predecessor and earn its place among the increasing numbers of phablet devices? That's what we intend to find out. Before we begin further analysis, here's an overview of the specs between the two LG phablets:

(Note: We've done a hands-on article with the G Pro 2 a Mobile World Congress 2014, so we'll summarize the key points here instead of going into great lengths again.)

Keeping its mobile devices button-less on the front and side is becoming a signature design attribute of LG's recent smartphone (the G2, G2 Mini and G Flex). While some consumers may not be sold on the rear button concept on the 5.2-inch G2, there is little reason to doubt its implementation on a larger form factor such as the G Pro 2.

As a quick recap of those who are new to the rear button concept, this deliberate design allows users to easily access the power button on the back regardless whether they are left or right-handed. This also makes sense as we typically rest our index finger at the back of a phone, thus you should have a more comfortable handling experience. 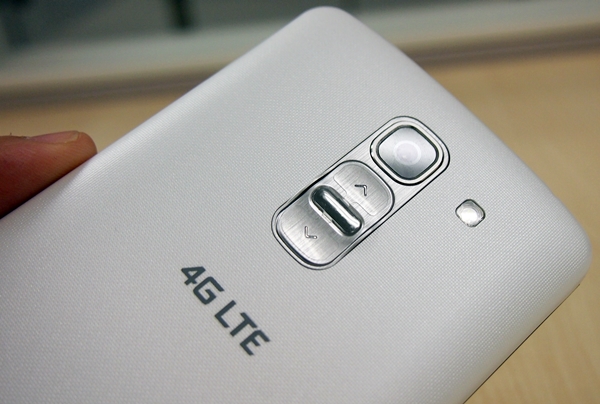 When we reviewed the Optimus G Pro, we realized its glossy plastic rear cover to be slippery. This is no longer the case as LG adopted a metal mesh finish for the back of the G Pro 2. The metal mesh offers a partial texture with friction, which makes the rear of the case non-slippery and easier to grip. Here's yet another shot of it.

LG's obsession with ultra slim bezels is carried over from the G2 to the G Pro 2 as the latter has a 3.3mm bezel. In comparison, the G2 has a 2.65mm bezel around its 5.2-inch IPS display. The 0.65mm difference may seem negligible, but it helps the G Pro 2 achieve the largest display area of any phone as it occupies 77.2% of the front face of the device.

As the display resolution remains identical to its predecessor, the pixel density drops from 401ppi to 373ppi which is still  excellent. The 5.9-inch IPS display is bright and offers eye popping colors with great viewing angles. Below is an overview of the display sizes, type and pixel density of the phablets you can find in the market:

The G Pro 2 ships with the latest Android 4.4.2 KitKat OS underneath LG's UX interface. While it is running the latest Android OS version available, it remains to be seen whether LG is able to deliver future software updates swiftly.

In case you haven't realized, LG doesn't have a good track record of supporting future software updates for its mobile devices. Its Optimus G Pro and G2 are still stuck at the Android versions they were shipped with, and we were told that there is no time frame as to when LG will deliver the latest software updates for these devices. The Android 4.4 update is available now for the G2, while the G Pro, G Tablet 8.3 and G Flex are slated to receive the software update in Q2 2014.

Having said that, LG introduced four new software features on the LG G Pro 2 - Dual browser, Mini view, KnockCode and Content Lock. We detail each of these features below:- 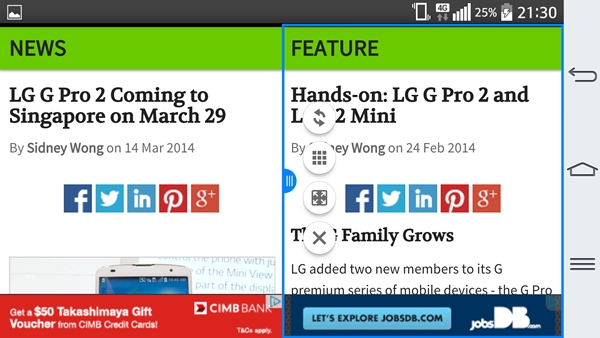 LG also 'took inspiration' from the one-handed operation feature on the Galaxy Note 3 to develop its Mini view feature. Using the same concept, Mini view enables you to adjust the size of the home screen according to your preferences.

This is essential since not everything you do on the G Pro 2 requires the extra screen real estate such as typing email or text messages, and having a smaller window allows you to carry out these functions in one hand. To activate Mini view, simply swipe the front touch buttons left or right. You can then position the Mini View window anywhere on the screen and resize the screen seamlessly  between 3.7 to 4.7 inches.

Remember the KnockON feature that was first introduced on the G2? KnockCode is an evolution of that feature where you can power on and unlock the G Pro 2 by tapping the display. According to LG, KnockCode uses a combination of LG's intelligent algorithm and advanced hardware to recognize the knock pattern that you enter on any part of the screen.

The chances of anyone guessing your unique tap combination are low since LG claims that KnockCode supports 86,367 different combinations. You can tap on any quarter of the screen using a minimum of two taps (which is easily hacked) to a maximum of 8 taps (which is much harder to guess) per quadrant. This flexibility helps you create a secure alternate method of unlocking your device and once set, supersedes  your other phone lock options. As such, if you opt to use KnockCode, choose a reasonable pattern that's not too easy to guess or too difficult to recollect and execute for maximum effectiveness.

KnockCode can be enabled via Settings > Lock Screen > KnockCode. In the event that you forgot your tap combination, the G Pro 2 will prompt you for the backup PIN after five unsuccessful attempts.

After testing out the feature for a few days, we realized that it seemed to work best with a four-tap combination. We tried using combinations of 8 taps, but the greater number of taps meant that there's a higher chance that the device may not register our taps correctly and that's exactly what this reviewer observed. At the fourth attempt, the screen will power on (if the screen was asleep) and warn you that there has been four unsuccessful attempts. The screen will then be partitioned in four quadrants just as you first saw when you enabled the KnockCode to provide better guidance on where to exactly tap for your final attempt. Overall, we find KnockCode to be a hit and miss affair and your personal mileage may vary. It's an interesting attempt to improve your phone unlocking experience to fast track it, but it may not be appropriate for everyone.

Guest Mode may be too obvious to friends or family members that you are trying to hide something from their eyes. To protect certain key content and yet appear 'open' to everyone, LG introduced Content Lock on the G Pro 2. It's however limited to hiding selected files, photos and LG memos.