LG G Flex - Ahead of the Curve?

We see many engineering concepts in the tech industry - cool, but often impractical, products that showcase the design and engineering prowess of a company. The curved, flexible display has been the dream of many a product designer. From tablets and monitors that can be rolled up and stored away, to smart watches that you can wrap around your wrist, such a breakthrough would completely change the way we design any device with a display.

But while everyone else was conceptualizing, LG actually went out and mass produced a curved display device, the 6-inch LG G Flex smartphone - an engineering concept you can buy right now (or at least, buy when it launches in Singapore on 21st December).

The G Flex isn't quite as malleable as the concept products people have been dreaming of, but it does curve - gently from top to bottom - and it flexes too, capable of being straightened completely flat, and then immediately reverting back to its original state.

So is this the future made real?

Before we start, let's take a look at a few of the G Flex's key highlights:

The G Flex is an undeniable head turner. While the actual curvature isn't that pronounced, the device is large enough that it immediately draws attention. Even so, our experience with the G Flex over the last few days has elicited much the same response from everyone we've shown it to: "Wow, that looks cool! Why is it curved?" And honestly, we don't have a particularly compelling answer for that. While Samsung's horizontally curved Galaxy Round is far more ergonomically awkward than the G Flex, at least Samsung has added some unique features to take advantage of the curved form factor (tilting the screen will display information such as missed calls and battery life). 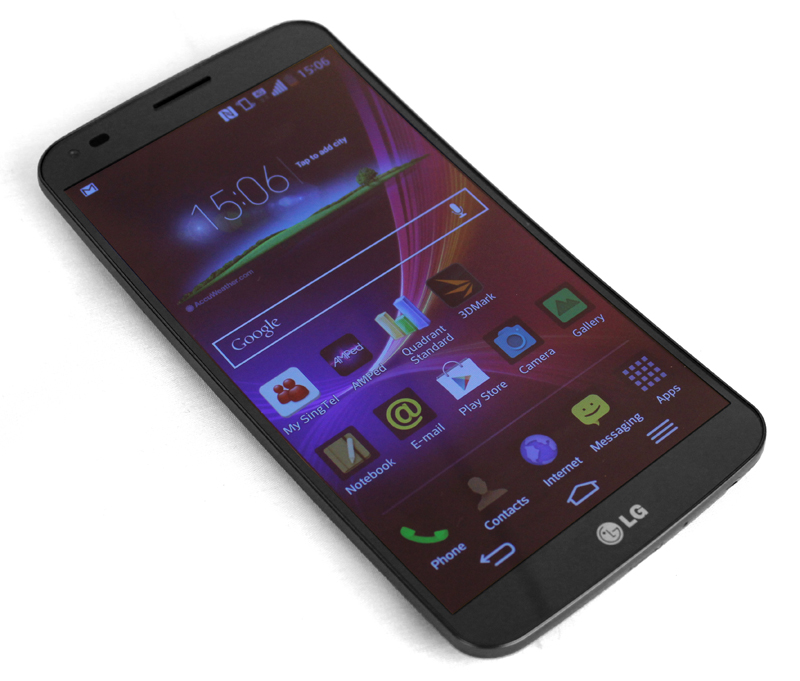 LG's literature does state that the curvature increases audible levels by three decibels, but placing two back-to-back phone calls to the same friend from the same crowded restaurant, first with the curvy LG G Flex, and then with a regular straight smartphone produced no discernible difference in clarity or volume between the two.

It's not like the curve introduces many ergonomic advantages either. It doesn't feel any more comfortable in hand or against your face than a regular straight smartphone. In fact, the only area where the G Flex's curve does provide an ergonomic benefit is when you're sitting on it. Put the G Flex in your back pocket and sit down and you'll enjoy the, shall we say, 'cupping' nature of the G Flex's design, although you do find yourself wishing you had a matching G Flex for the other side. Would it snap the G Flex in half? Due to the curved nature of the device, LG also ensured that the phone can flex a fair bit (as seen in the video above) and withstand up to 32kg of weight officially. Though the product managers have mentioned the phone can take up to 80kg, it's understandable to leave a large overheard of safety margin. Unfortunately, we know there are many people who weigh over 100kg, thus we wouldn't recommend that the phone is suitable to be in everyone's back pocket while seated. This again poses the question if the phone's curved design is practical to begin with. 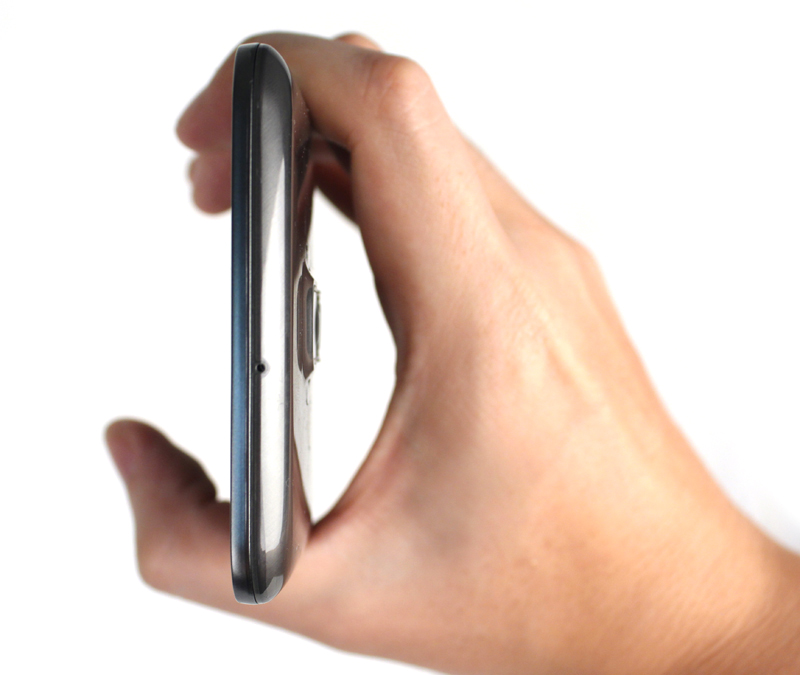 Honestly, LG seems to have just curved the display and called it a day - we're given no reason as to why we would actually want a curved display, other than to show off LG's admittedly impressive engineering.

As with pretty much all LG smartphones, the G Flex is entirely plastic. The front has a dark mirror finish that looks quite nice, while the rear sports a brushed, metallic grey color. The rear of the device is also coated with a unique self-healing finish that actually works pretty well (see our video). The finish will heal from most light scratches, and even deep gouges will recover, if only to a certain extent - reflect some light onto the scratch and you'll still be able to see the deeper wounds.

The G Flex achieves its party trick through the use of a soft and elastic, clear plastic finish. Scratch the finish and over time, it will effectively bounce and melt back together, reducing the appearance of scratches - you can also rub furiously on the scratch to heat up the finish and speed up the process. The underlying dark metallic color and brushed design also help disguise scratches. Our only complaints are that the finish attracts dust quite easily and because of the thick coating, it also looks extra plasticky and perhaps a bit cheap as a result - still, it might be considered a reasonable trade off for keeping the back of your phone looking relatively brand new. 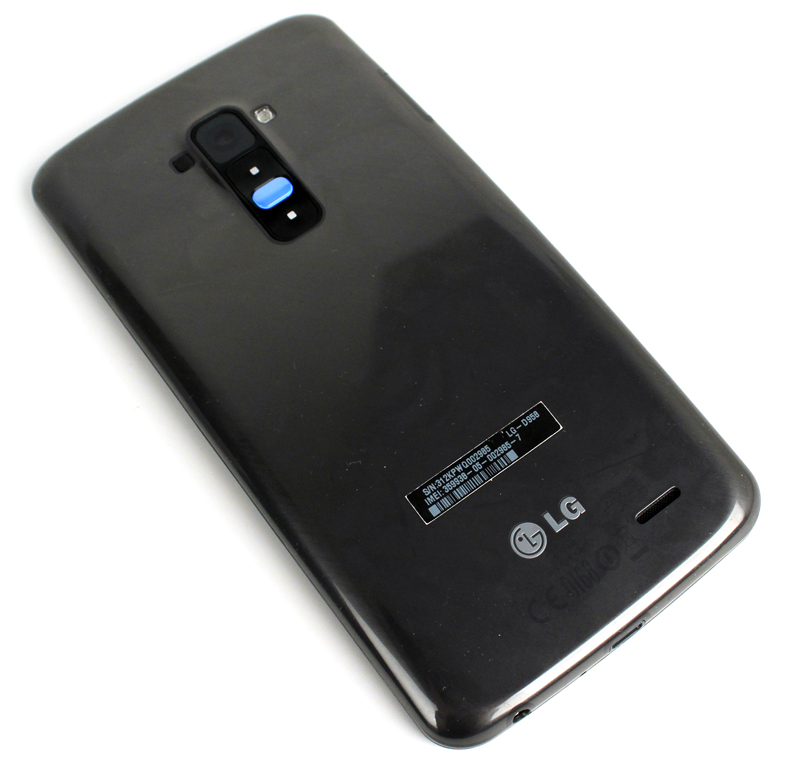 Unfortunately, the large display on the front of the device won't heal from scratches - which is probably where you actually want the self-healing to take place. In fact, we suspect the display is a lot more susceptible to scratches than most smartphones due to the lack of the usual Gorilla Glass. You'll definitely want a screen protector - a quick search online reveals a few already available - although, due to the curve it might be a bit trickier to apply than usual.

Edited 16/12/13 - According to LG, the G Flex does actually have a layer of Corning Gorilla Glass, which should make it as scratch resistant as other straight smartphones.

The G Flex adopts the rear button design of LG's G2 smartphone, with the power and volume buttons all located at the top-middle rear of the device. The micro-SIM tray can be found on the left edge, while the headphone port and micro-USB port can be found on the lower edge. Like the G2, there's unfortunately no microSD card slot for expandable storage (and it would probably be difficult to design one with the curved and flexible nature of the phone).

While of debatable beneficial use on the 5.2-inch G2, the rear buttons on the G Flex are a definite boon, making it far easier to handle than other large display phablets, which often require some hand juggling to turn on and use the volume controls. Improved from the G2, the G Flex's central power button is backlit with a notification LED that can be customized to display different colors for a variety of scenarios; this is more visible and helpful than the G2's LED notification light ring surrounding its central power button. One thing we would have liked to see changed is the positioning of the camera lens, which, like the G2, is located directly above the volume up button. This often results in your finger smudging the lens as you feel around for a button. For a more in-depth review of the rear button layout, please refer to our LG G2 review.

Surprisingly, the LG G Flex does not have a full HD display, armed instead with a middling 1280 x 720 pixels resolution screen which gives it a very ho-hum ppi of 245 - the last time an LG device had a ppi this low was the 2011 Optimus 2X. The display is using LG's new P-OLED technology, with the P standing for plastic (as opposed to glass like on a regular OLED, which wouldn't be able to flex). It's likely due to how new the technology still is, that LG is currently unable to put a full HD display into the G Flex.

In usage, while watching movies and viewing photos on the G Flex look fine, with a display this large, it's easy to see the lack of clarity when viewing websites, especially when compared to full HD phablets like the Nokia Lumia 1520 or Sony Xperia Z Ultra. 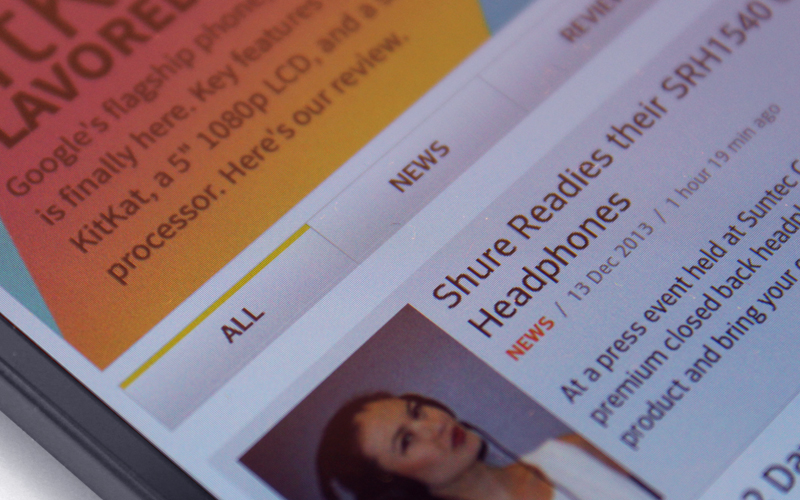 At maximum brightness, the display looks decent enough, with bright and vivid, if rather over saturated colors, and good contrast with deep blacks - although there is a slight but noticeably bluish tinge when viewing white websites, reminiscent of a computer monitor. If you decrease the brightness however, some alarming issues quickly become apparent, including fairly obvious image retention that looks a bit like persistent ghosting (although it does fade after a few seconds) and a noticeably grainy quality that reminds us of a poor quality screen protector.

The graininess is actually present at maximum brightness too, it's just not as noticeable due to the brightness of the screen - we suspect it's caused by the plastic screen causing distortion. Viewing angles at all brightness levels are also quite poor, so you really have to keep the G Flex facing head on - which means no watching videos with friends. 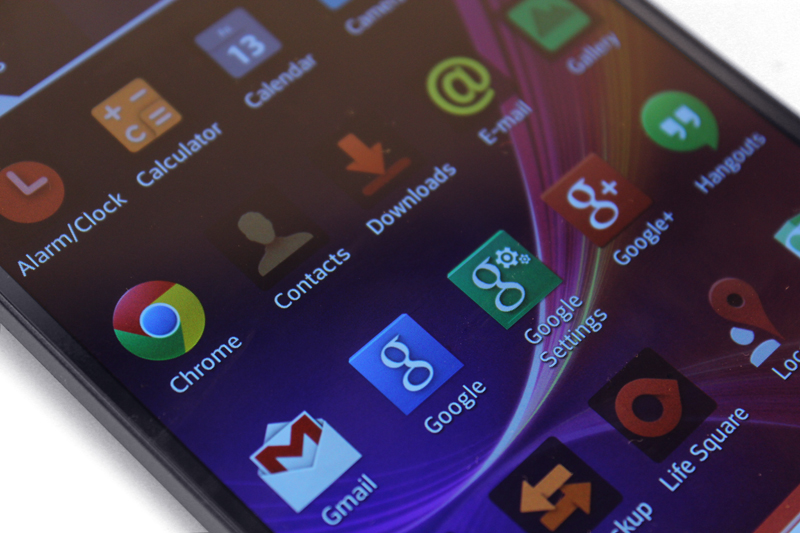 Having said that, it's not all bad. Viewing content in landscape mode at full brightness is quite satisfying. And while we wouldn't agree with LG that the display is more 'immersive' (it's hard to justify using that word on a 6-inch screen), it certainly looks good. According to LG, the curved display also reduces glare, but we didn't notice any difference ourselves; this is of course subjective to individual usage, but theoretically based on the design principles, it should help reduce glare marginally due to the screen's curvature. The display also has the odd quality of horizontally stretching reflections (imagine a fun house mirror), which makes them somewhat more noticeable than they probably would be. 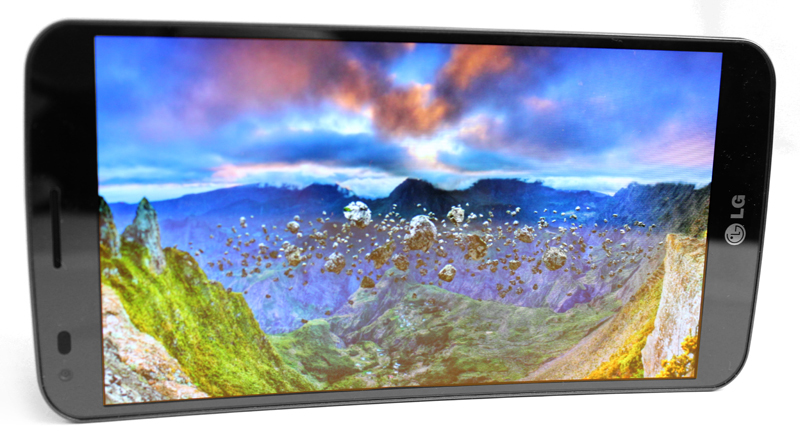 Overall, while the display isn't unusable, we can't help but feel disappointed. For a device that boasts such advanced technology behind the screen, it's a real shame that the screen itself feels like a step backwards. 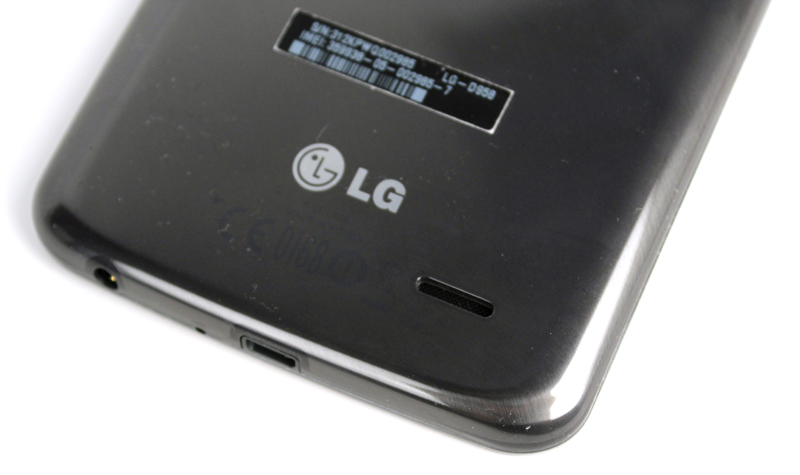 Audio on the G Flex is supplied via a single speaker located on the rear lower edge - unfortunately positioned right under where your hand is likely to rest (although this isn't as much of a problem in landscape orientation). Audio is rather lacking in both volume and quality, with a tinny aspect that isn't helped by the fact that the speaker is facing away from you. On the plus side, like the G2, the G Flex will come supplied with LG's Quadbeat 2 in-ear earphones, which are a fairly decent step above most bundled earphones.

Like the G2, the G Flex will be running Android 4.2.2 Jelly Bean with LG's TouchWiz skin and includes all of the enhancements and custom apps that we saw on the G2, including QuickRemote that transforms your smartphone into a universal remote control, KnockON, which lets you double tap the display to turn the screen on and off, and Answer Me, which will automatically pick up your call (without any swiping or button pressing) when you place the ringing phone to your ear. You can also customize the on-screen soft keys and set up a Guest Mode with limited access to apps for friends and family to use.

The only real difference between the G2 and the G Flex UI is a darker overall look and theme. Overall, while the G Flex's UI isn't the most aesthetically pleasing around - it actually looks rather dated - it does provide a fair amount of utility and customization. 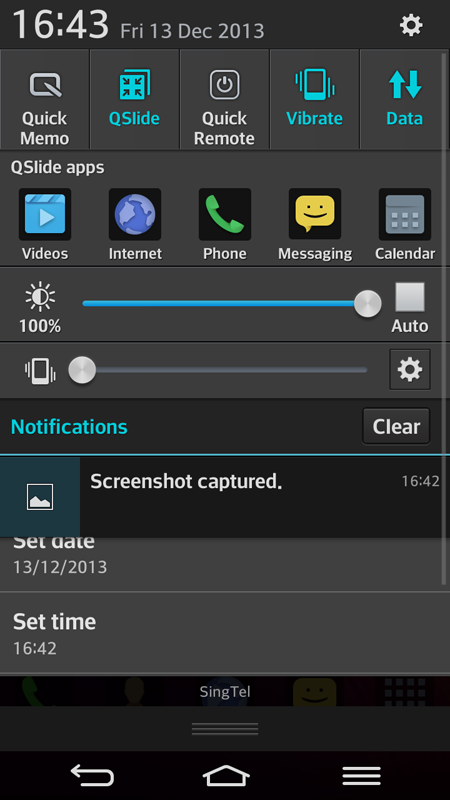 Write a Review
Compare This | Specifications
Curved form factor
Easier to handle than other phablets
Self-healing rear finish
Flexible build
Solid performance
Good battery life
Easy to take selfies
Low res display with noticeable graininess and image retention
Lack of utility to take advantage of the form
No Optical Image Stabilization
No expandable storage
Expensive
Our articles may contain affiliate links. If you buy through these links, we may earn a small commission.
Sponsored Links