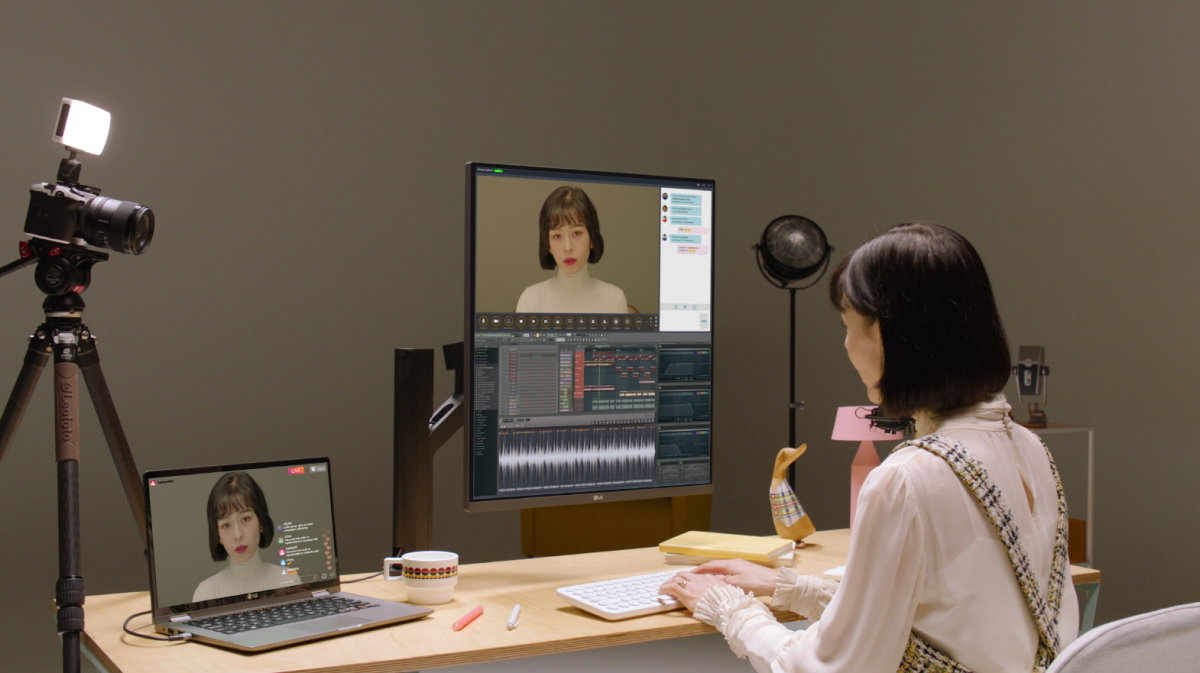 A focus on getting work done

While there are several office-centric screens, LG’s DualUp Ergo 28MQ780-B is possibly the first purpose-specific productivity monitor that isn't targeted squarely at the corporate market and is to help creators get work done efficiently. Remember typical widescreen monitors have a 16:9 aspect ratio, and those that stress that it allows you to read more vertical content have a 16:10 aspect ratio? Well, LG has taken a bold step forward with the industry's first 16:18 aspect ratio monitor that's totally focused on vertical screen space usage in a big way. Its 27.6-inch Square Double QHD (SDQHD) resolution display sports an unorthodox resolution of 2,560 x 2,880 pixels and has a vertical split view function that lets users see more in one glance.

Launched at CES 2022 and nabbed a CES Innovation Award (which our Editor-in-Chief was a part of the judging panel), the LG DualUp Ergo monitor finally made it to Singapore in the second half of 2022, and we spent a good amount of time assessing its proposition. 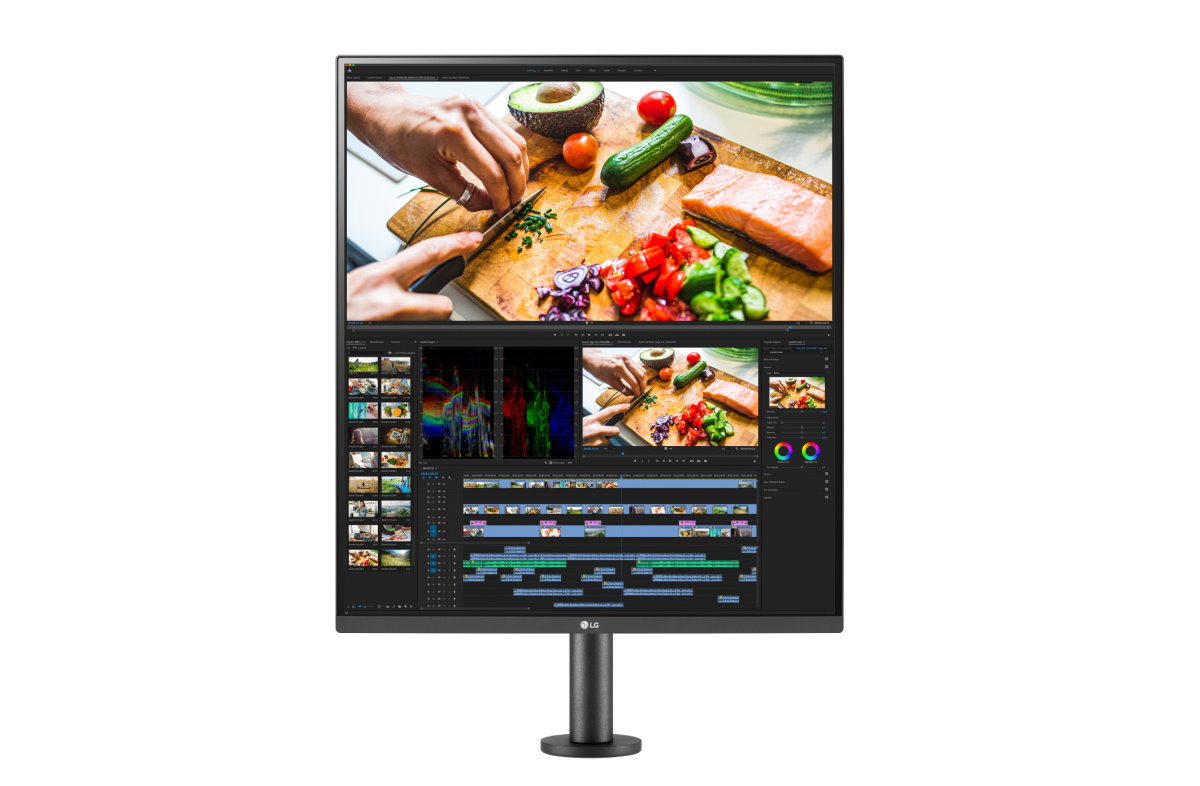 This is quite unlike the growing number of monitors on the market with gaming-friendly specifications and a focus on widescreen gaming and entertainment needs, LG's DualUp Ergo has dropped all pretences on that front to focus exclusively on productivity. You won’t find low response time, blistering response rate, or a curved panel here; this is a monitor designed squarely (pun intended) for the non-gamer. To this extent, the Nano IPS panel supports a wide colour spectrum, with a claimed 98% DCI-P3 colour space colour accuracy, has HDR10 content support and can output up to 300 nits of brightness. 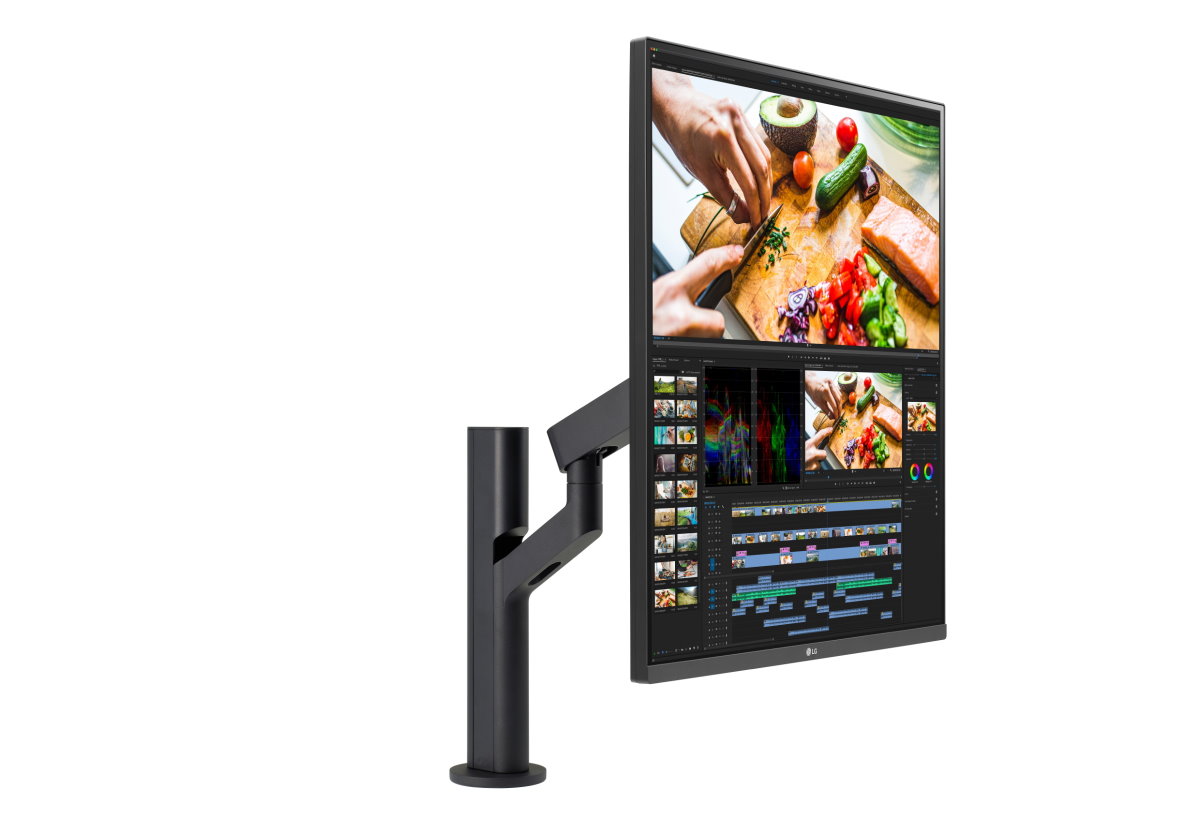 While most monitors come with a desktop stand, the DualUp comes with what LG calls the Ergo Stand, which is a C-clamp monitor arm that clamps to the edge of your desk. This offers the advantage of freeing up desk space usually taken up by a traditional desk stand, while the stand packs in screen swivel, pivot, tilt, height and arm extension/retraction capabilities to cover almost any repositioning need:-

A clever notched design lets you adjust the desk clamp to its maximum extension of 75 millimetres without the need for any tools. The clamp will also work with grommet holes. Simply remove two retaining screws, take out the bottom latch, thread the stem of the clamp through the grommet hole, fit the latch back and tighten. This flexibility comes in handy when your desk and partitions aren't friendly enough to clamp the screen from the rear edge. Don't forget that thanks to its ergonomic and flexible arm built with the stand, you can also consider clamping the monitor to the side of the desk and still not worry about the angle of use. 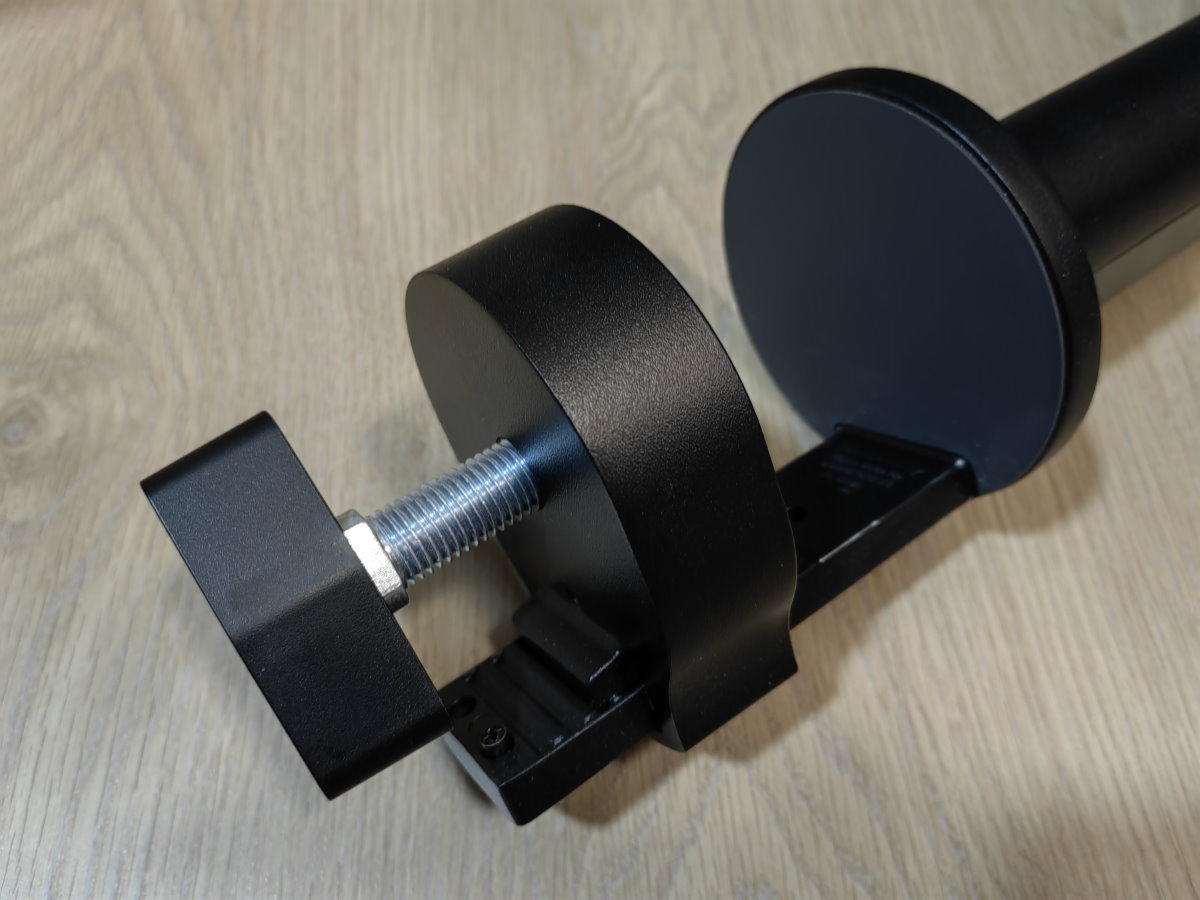 The monitor arm itself feels substantial with a metal core sheathed with some plastic and offers excellent wire management to hide your cables. The tension of the arm is adjustable using an Allen key, and the current tension can be easily seen on a five-point gauge built into the arm. 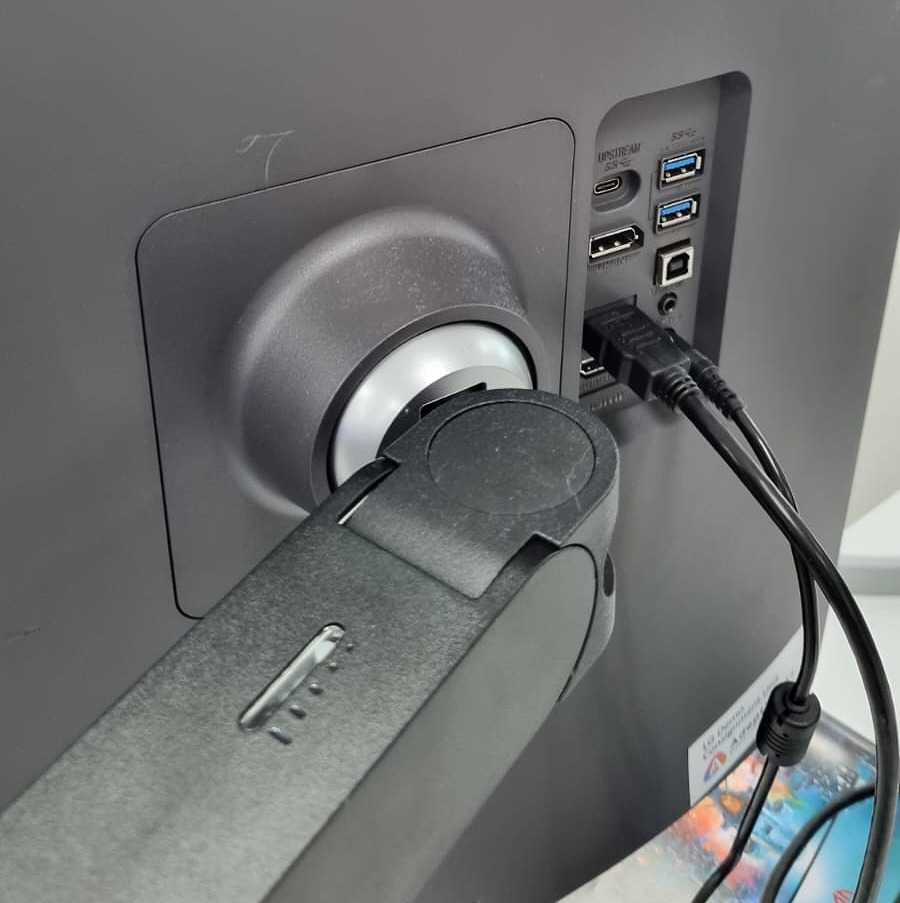 Once installed, the monitor arm offers a good range of movement that works even when your desk is up against a wall. The arm is also quite well thought out, with channels to hold, guide and even hide cables (though it would require more effort, as with any cabling routing effort). That said, the ability to extend the DualUp monitor towards you might be a tad limited due to the relatively short length of the arms (compared to some standalone monitor arms with deeper extensions). However, it shouldn't be an issue for desks with average depths of 60 to 70 centimetres.

Of course, the lack of a monitor stand does mean that it can’t be used on a glass table or flimsy makeshift desk. Strangely, you can only rotate the bundled monitor arm in an anticlockwise direction – it won’t rotate in the other direction. This isn't an issue with most users but might be a consideration if you are planning on using two of them lengthwise. As an alternative, you can use the DualUp with another VESA-compliant monitor arm. 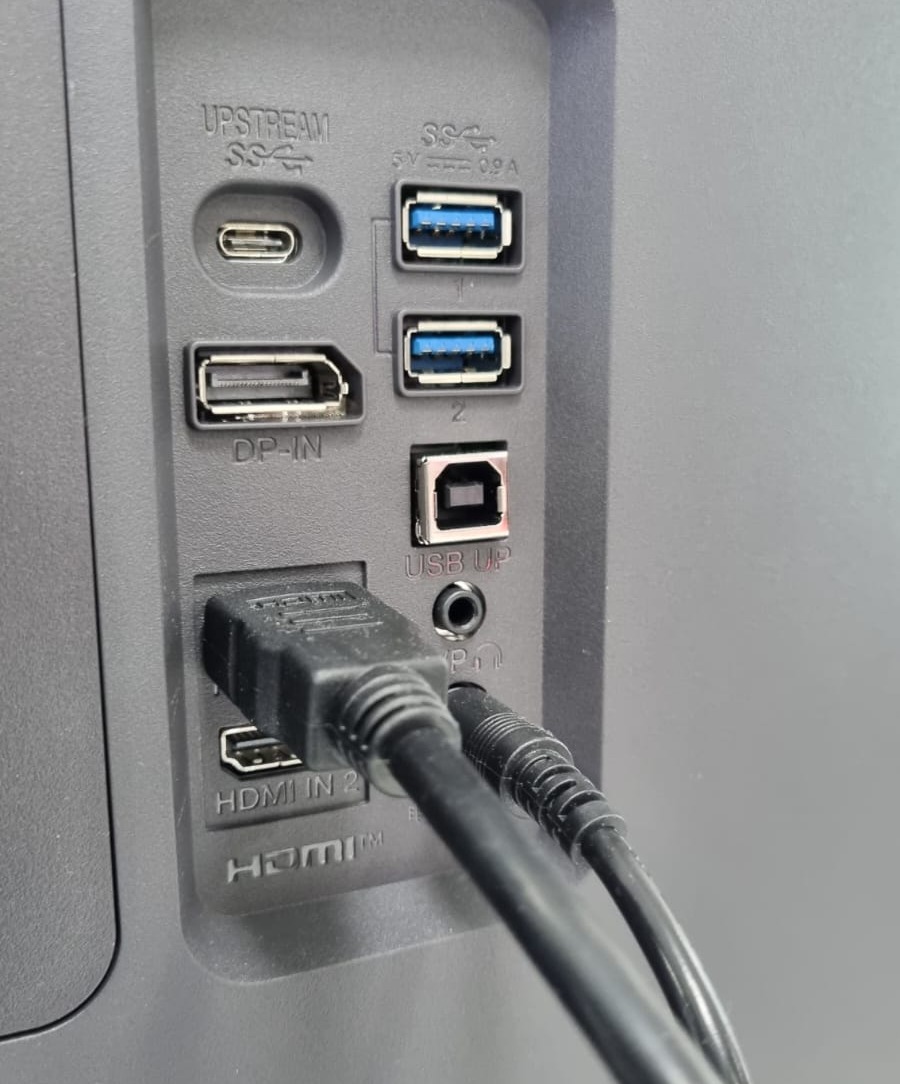 In terms of interfaces, there is one USB 2.0 upstream port, one USB Type-C upstream port, twin USB 3.0 ports, one DisplayPort 1.4 port, twin HDMI 2.0 ports, and a headphone out round off the available connections. The USB-C port support 90W Power Delivery (PD) so that you can charge a compatible laptop at your desk, through this monitor, while extending or mirroring your workspace on a single compatible USB Type-C cable.

The monitor also supports a feature called PBP, otherwise known as Picture-by-Picture, to split the large squarish 16:18 screen into two separate 16:9 screens (top/bottom) placement. Thanks to PBP, all you need to do to avail this feature is connect a secondary video capable (HDMI or DisplayPort) from the same notebook. You could also use PBP to connect two different systems to the same LG DualUp monitor and utilize the built-in KVM functionality to manage both systems with a single pair of keyboard and mice connected to the display.

The DualUp monitor by itself (without the stand) weighs around 4.3kg due to the use of an external power brick. The power adapter itself is heavy, though, which it's not surprising considering the need to power both the monitor and laptop-grade PD charging functionality. In case you find the power cable too short, the included DC-to-DC extension cable lets you double its length to comfortably support users with larger desks or multi-monitor deployments.

The DualUp offers a low blue light function for eye protection and is accredited with TÜV Rheinland Eyesafe Display Certification for next-level eye comfort. In use, text was crisp, and the entire screen came alive as the colour gradations in web pages and certain GUI elements became noticeable. Do these aspects of the monitor aid in productivity? I would say so, with the experience akin to that of a luxury car – it just feels so just much better than entry-level monitor models.

Indeed, used side-by-side with far more expensive productivity monitors such as the Dell U4021QW (which is also an IPS screen with a similarly rated 98% DCI-P3 colour space support), I found no real discernible difference in quality and image reproduction on the DualUp nor anything amiss by working together with both screens. The monitor is rated for 300-nits brightness, and I found that a brightness setting of 65 (out of 100) proved adequate in a well-lit room.

Some reviewers have complained that because of its size, webcams placed on top of the DualUp are too high. However, this might be due to them treating the DualUp as a normal widescreen monitor. In practice, I found that actually lowering the DualUp so that it sits closer to the desk eliminates the webcam angle problem, and better aligns the top of the screen to a more comfortable viewing angle anyway. 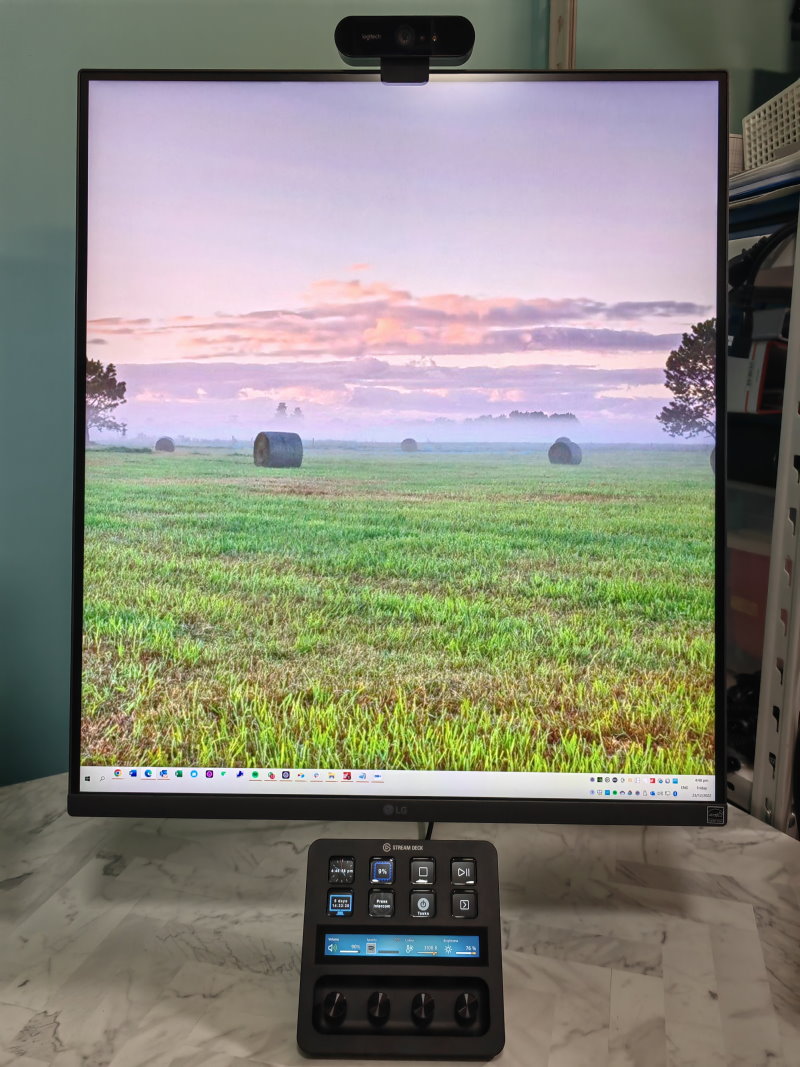 The true marvel of the DualUp monitor is the ability for programmers, designers, and office workers to see more of their code, artwork, or spreadsheets without scrolling. While a widescreen 27-inch monitor in landscape mode is even taller, it is also far narrower and precludes the ability to place app windows side-by-side. In the same vein, such a screen setup would also feel too tall and narrow unless a smaller screen is used in portrait mode. 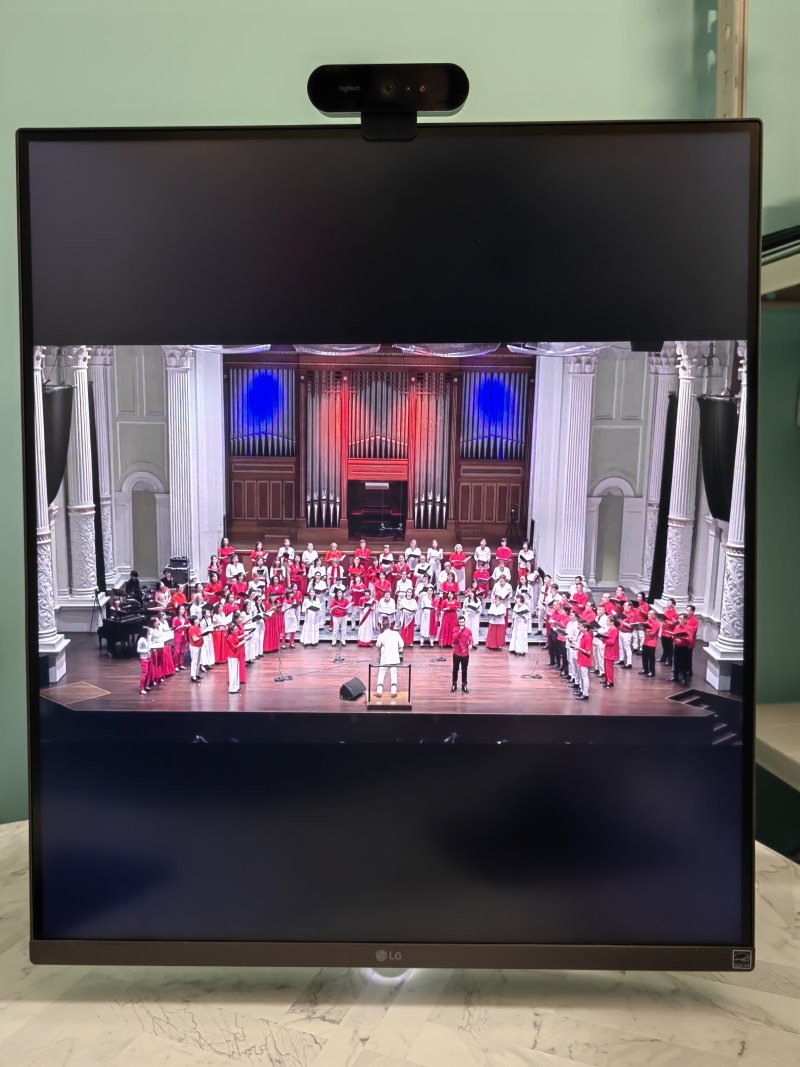 With the DualUp, users can scroll through lines of code vertically, or snap two windows on vertically, and you essentially have two standard 21.5-inch (16:9) monitors stacked on top of each other, albeit without a bezel in between. On the flip side, prepare to see huge black bars if you plan to watch YouTube or other standard widescreen videos in full-screen mode.

Though the DualUp works exceptionally well as intended on its own, another attractive usage scenario is to use it as part of a multi-monitor deployment. Put two DualUps together for an exceptional amount of screen space with less than a meter of desk space. That's equivalent to four 21.5-inch displays in a grid! 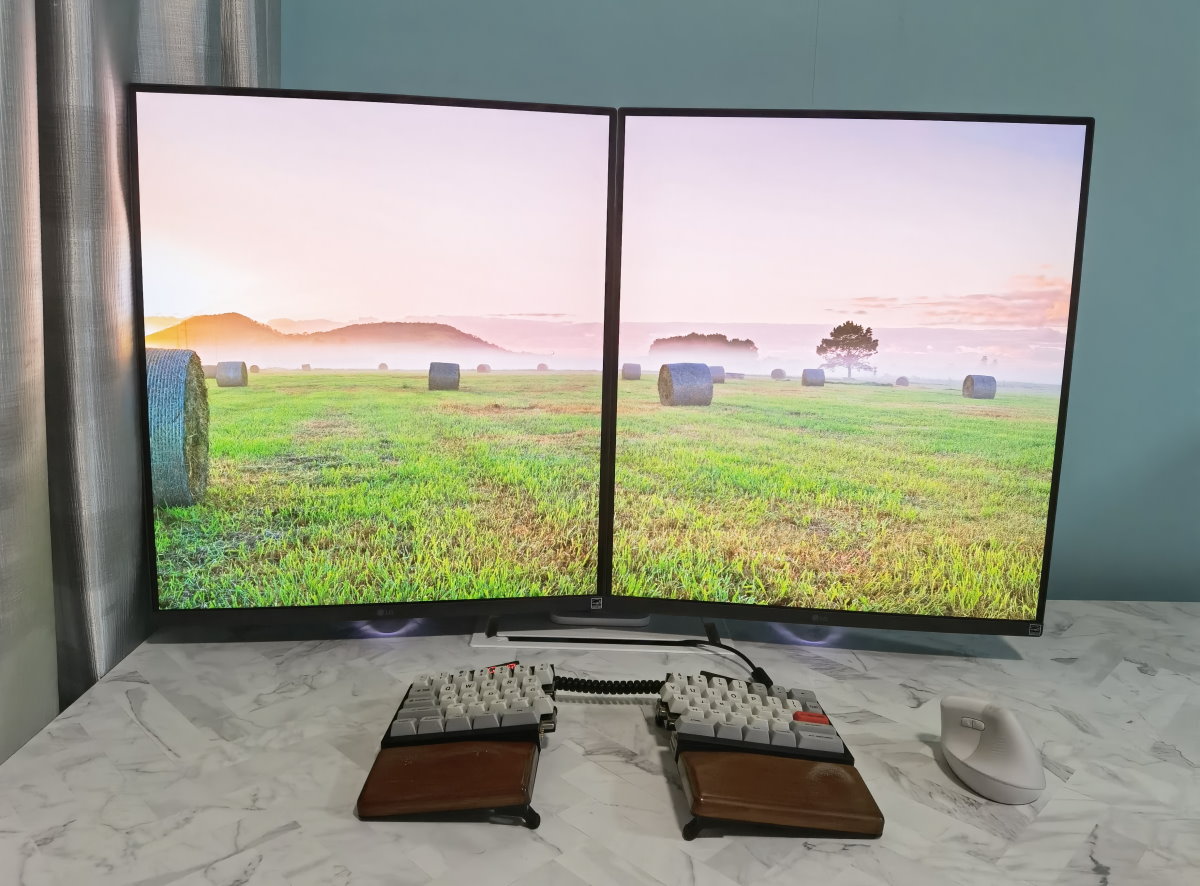 Square monitors have traditionally served a niche market and are hard to come by for consumers. Though the LG DualUp is not completely square, its aspect ratio will bring a smile to the face of coders, workers who work heavily with spreadsheets, or anyone who has ever wished for more vertical screen space. Even if you don’t care about productivity, its compact footprint, along with its bundled monitor arm, makes it perfect for space-constrained workspaces.

The DualUp is quite expansive in terms of screen real estate for its intended purpose, but it bears thinking about how one plans to use it. For example, it's not meant for you to place two Microsoft Word applications side by side as there's not enough width to accommodate such effectively. On the other hand, a single Word application would look really nice as you can read the full document (or more) effectively without scrolling. It will also work well for Photoshop or CAD work, where more space to stack your various tools is a boon on this compact form factor screen. The LG DualUp will also pair exceptionally well with a similar specced main widescreen, such as how I've tested it, as a secondary screen, or with another DualUp (as seen in the above photo).

Its launch price of S$999 does make the Dualup 28MQ780-B a tad pricey, though you can now get it for S$899 and under if you look hard enough. Prices have dropped by about S$100 across all official e-stores and retailers that we've checked. However, we suspect that the price matters less to its relatively niche audience. The DualUp is a unique monitor without any real competition at the moment in the market in terms of design and usability. And if you can afford it, you do get a top-notch IPS screen, integrated monitor arm, well-thought design, and the support of a well-established brand.

You can buy the LG DualUp 28MQ780-B from LG's official stores on Lazada and Shopee, as well as the usual retailers like Best Denki, Courts, Gain City, and Harvey Norman.