DisplayMate is an application which generates a sequence of test patterns to determine the capabilities of imaging devices, like color and gray-scale accuracies for example. For our tests, we've hooked up the LG LW6500 to our display test-bed PC using an HDMI connection. To be fair across the board, we have also disabled all visual enhancements on the TV in order to reduce the variables involved. Here are some findings based on the relevant and critical test patterns:-

Screen Uniformity
The LW6500 suffers from similar issues as the LV3730, namely with excessive backlight bleeds and inconsistent lighting. Blooming tendencies were apparent on darker shades compared to brighter colors. On the dark red test pattern, for example, dark spots were evident in the upper and lower areas of the panel.

Dark Gray Scale
Grey tones were unevenly rendered due to the inconsistent LED backlighting. Black boxes at the upper corners also appeared dark grey rather than solid black. You can mitigate this issue by lowering the backlight value, for instance, though this may lead to a massive trade-off with picture detailing.

Color Scales
All ten principal colors were accurately depicted. No indication of color tracking errors except for minor "clumping" issues towards the darker regions. Viewing angle on the horizontal plane was healthy for about 70 degrees thereabouts. The panel was less adept on the vertical axis, however.

256-Intensity Level Color Ramp
White levels could be better. On the bright side,  the TV did not exhibit any major compression artifacts, except towards the darker regions. 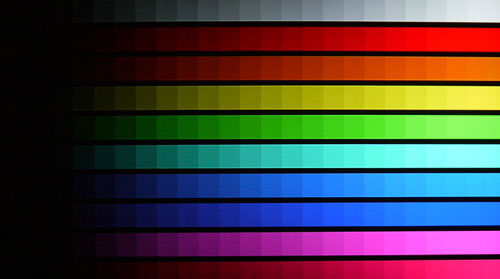 IDT's HQV Tests are designed to assess image quality of digital displays through a variety of video signal processing tasks which includes decoding, de-interlacing, motion correction, noise reduction and film cadence detection. We've programmed the Blu-ray player to playback in 1080i in order to stress the TV's video processor. This compels the TV's processor to convert interlaced signals into progressive to accommodate the HDTV's panel. Here are the results we noted on a few of the more crucial tests:-

Digital Noise Filtering
Noise filters on the LW6500 are visibly more efficient than the LV3730. Judging from HQV's simulated video, more than fifty percent of noise grains were effectively removed without compromising on picture quality. Four selectable levels are available - Off, Low, Medium and High.

Film Resolution Loss Test
The LW6500 was a natural in delivering content at 24 frames per second. However, you'll need to enable the set's Real Cinema mode since the LW6500 does not offer any default cadence detection on its own. 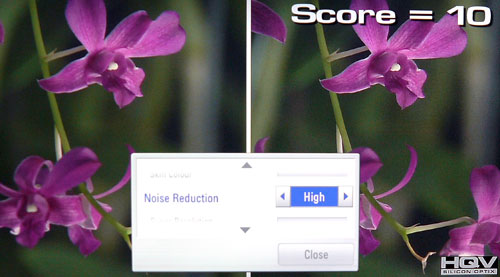