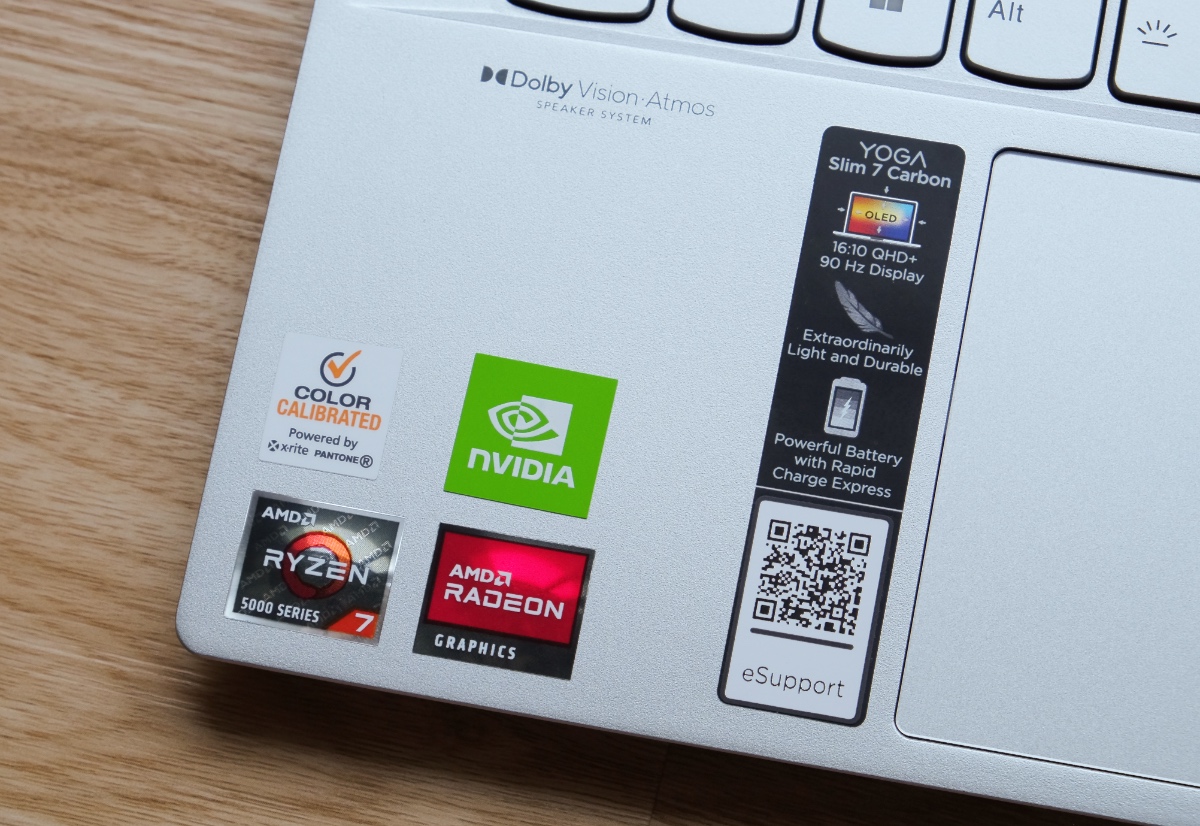 Unlike many of the ultraportable notebooks currently on sale now, the Yoga Slim 7 Carbon is powered by AMD’s Ryzen 5000 series chips. The desktop versions of the Ryzen 5000 chips have been well-received and we have waited a long time to see how their mobile counterparts will perform, especially against other notebooks like the ZenBook 14X OLED, Acer Swift 5, and even Lenovo’s own Intel-powered Yoga Slim 7i Carbon.

To recap, the unit I'm testing has an AMD Ryzen 7 5800U processor with 16GB of memory, 512GB SSD, and NVIDIA GeForce MX450 discrete graphics.

The combination of AMD’s Ryzen 7 5800U and NVIDIA’s GeForce MX450 is formidable. The Yoga Slim 7 Carbon clocked in the highest scores on almost every benchmark. Multi-core performance on both Geekbench and Cinebench are a highlight, demonstrating the prowess of AMD’s newer chips in multi-thread workloads. Graphics performance was quite good too as it resisted throttling well on Tomb Raider. That said, it must be noted that during Tomb Raider, the notebook was very warm to touch and the fans were spinning so vigorously that I thought it might take off. Even so, it packs impressive performance in a notebook this thin and light. 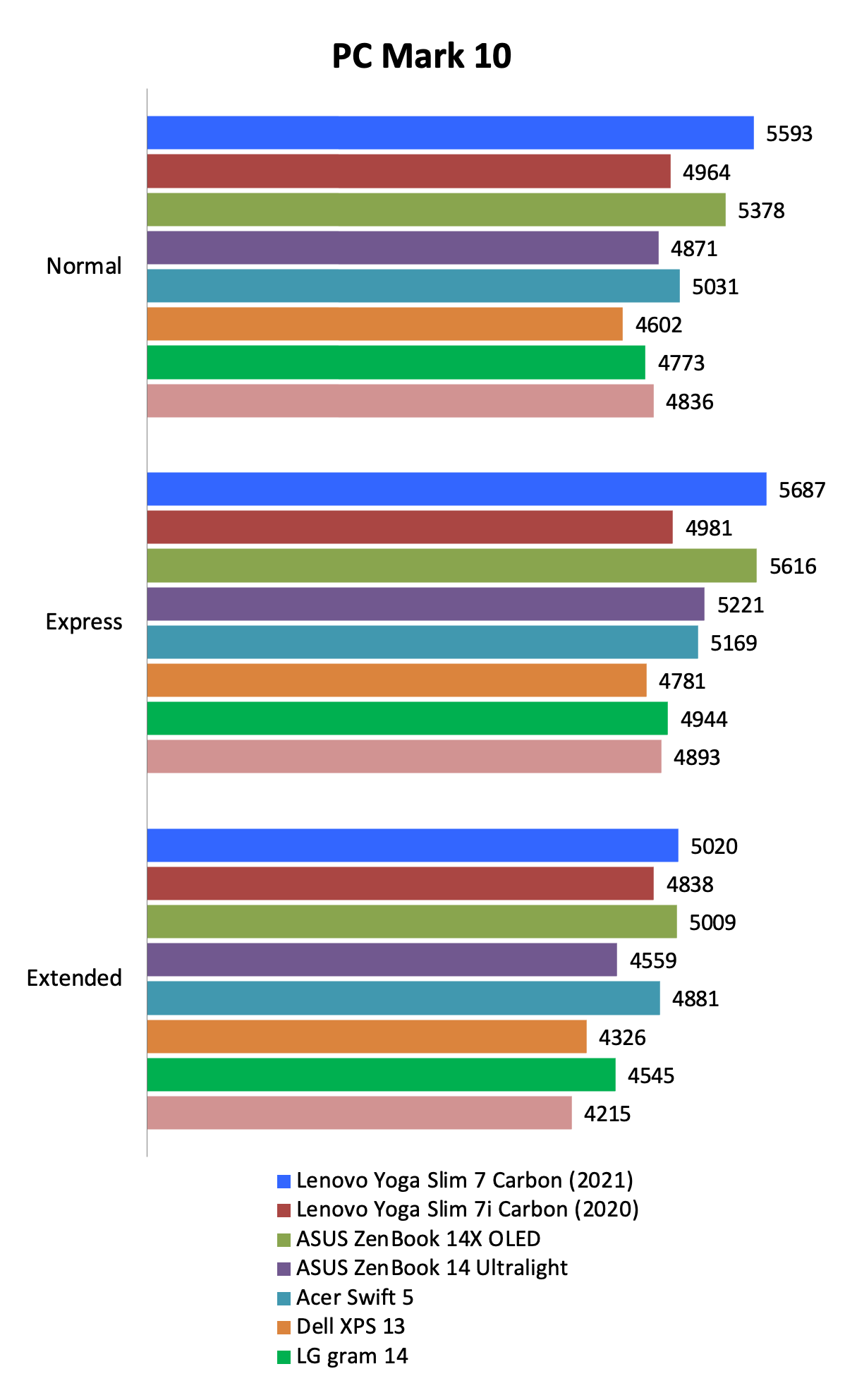 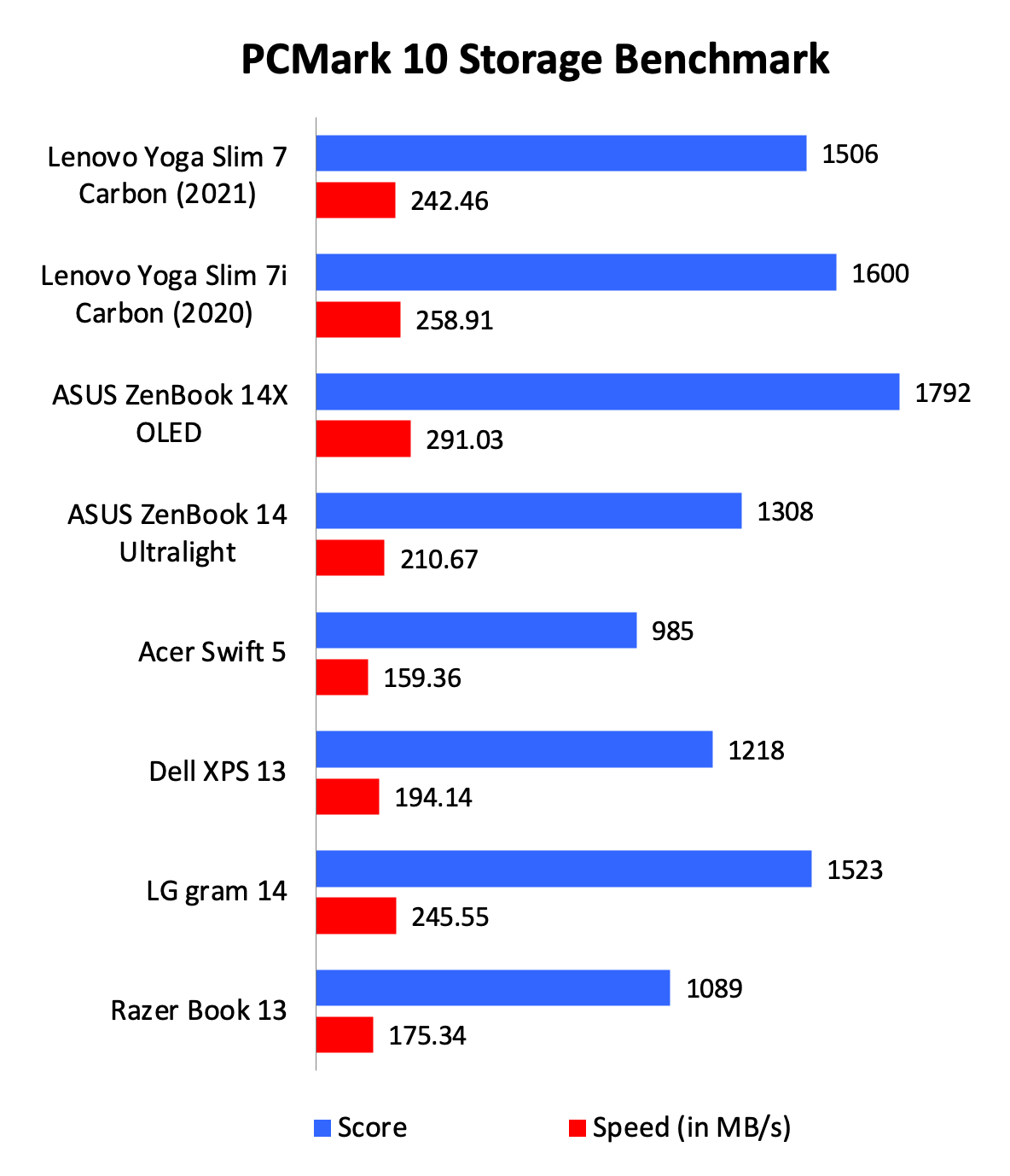 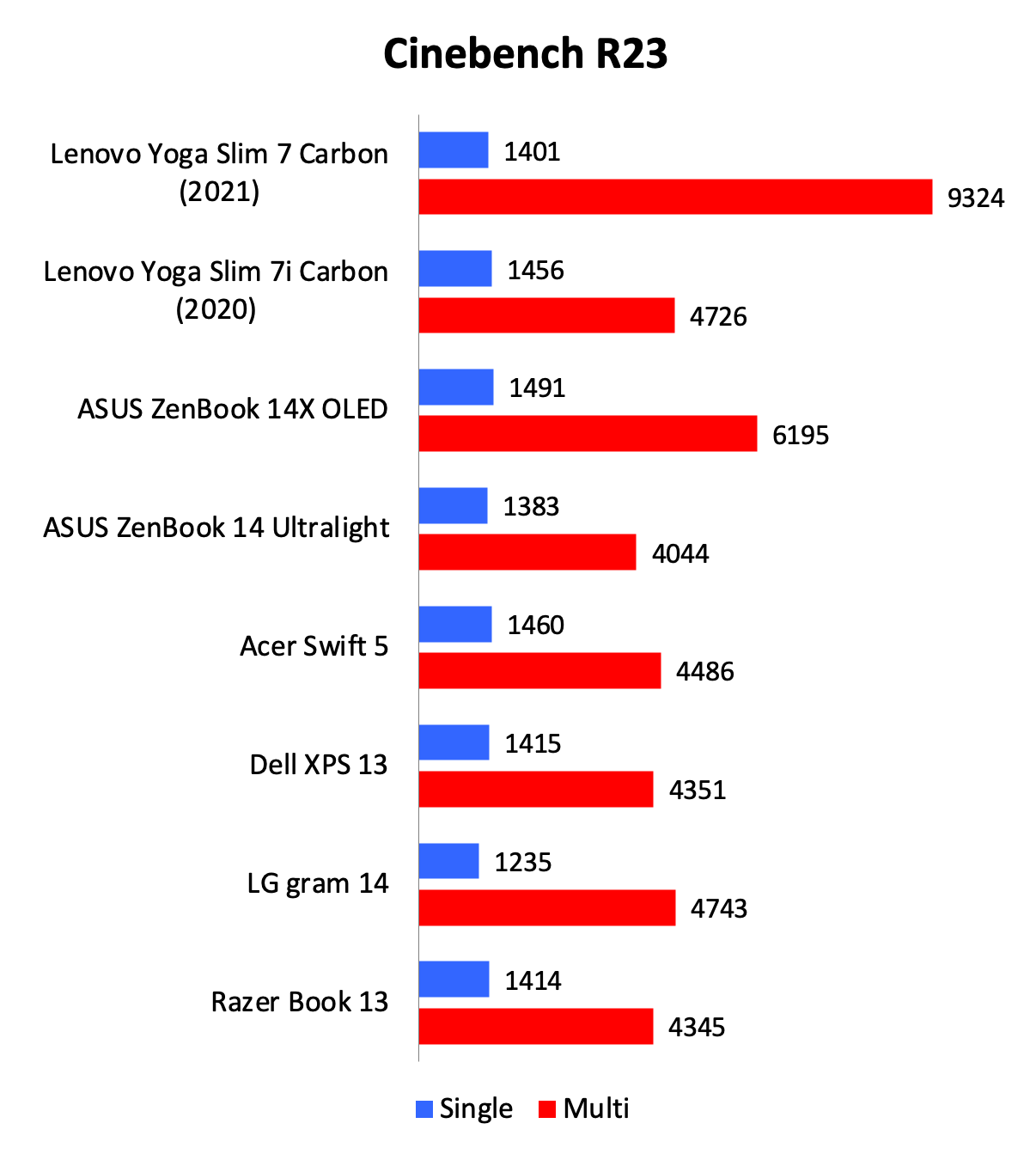 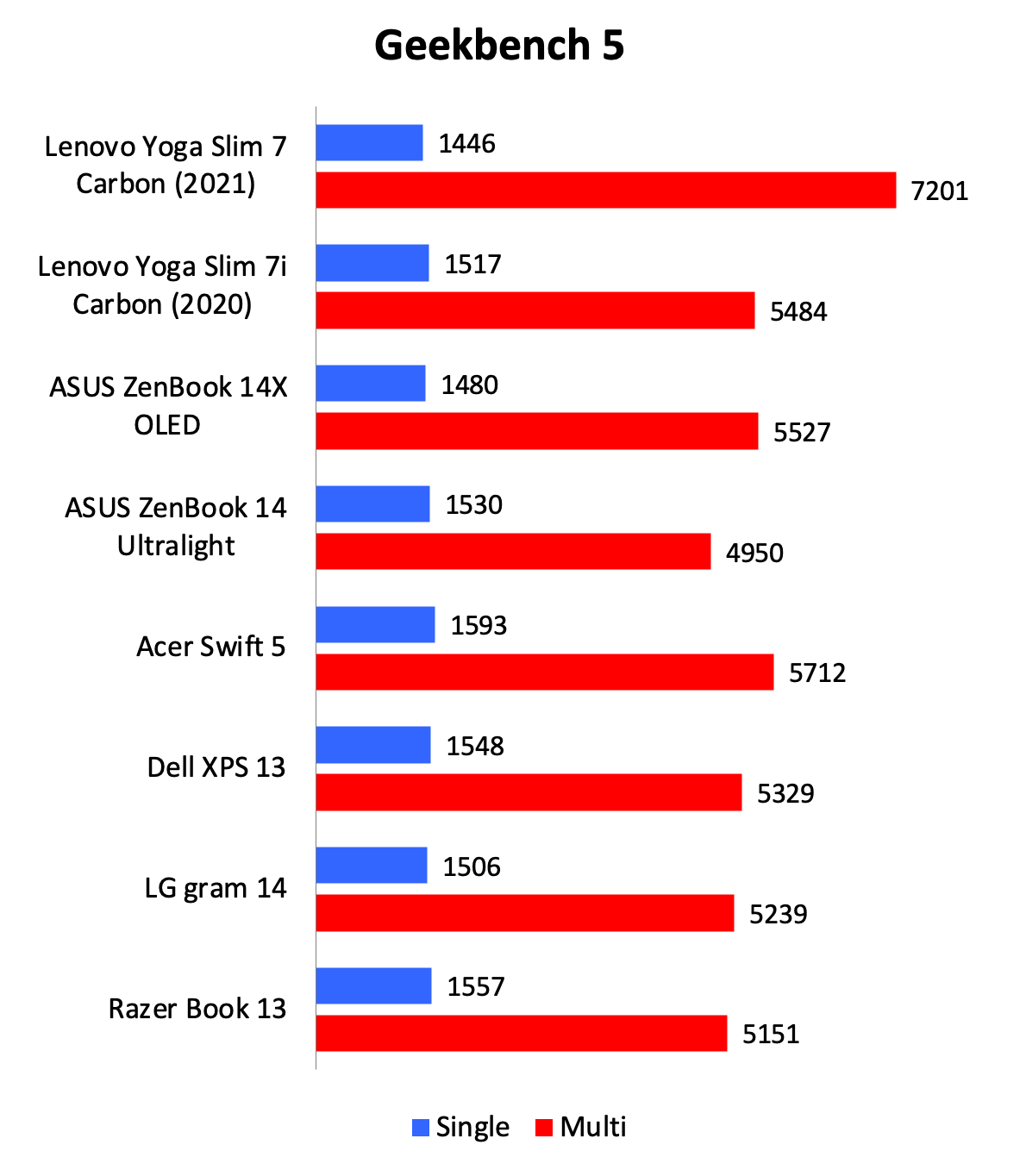 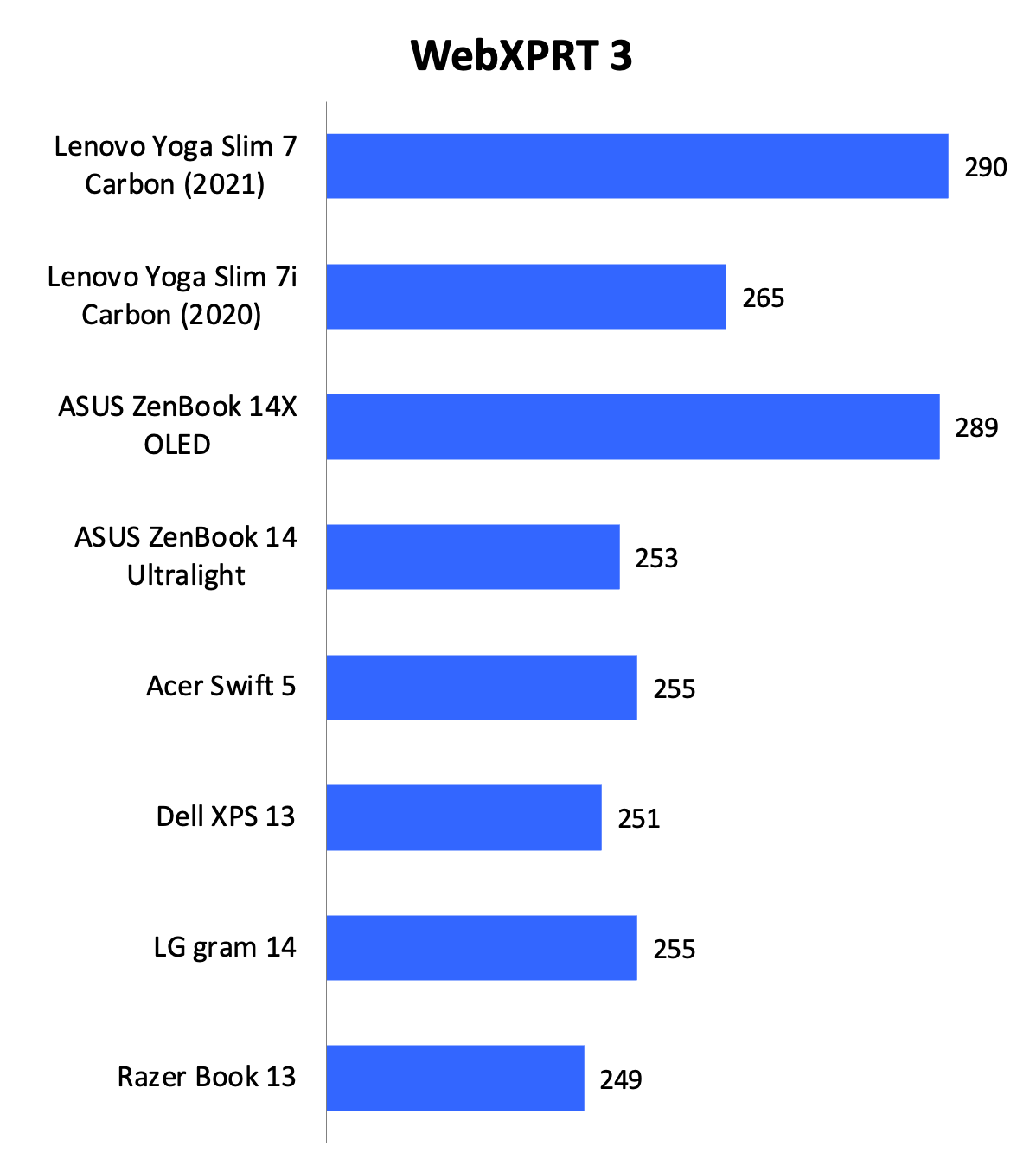 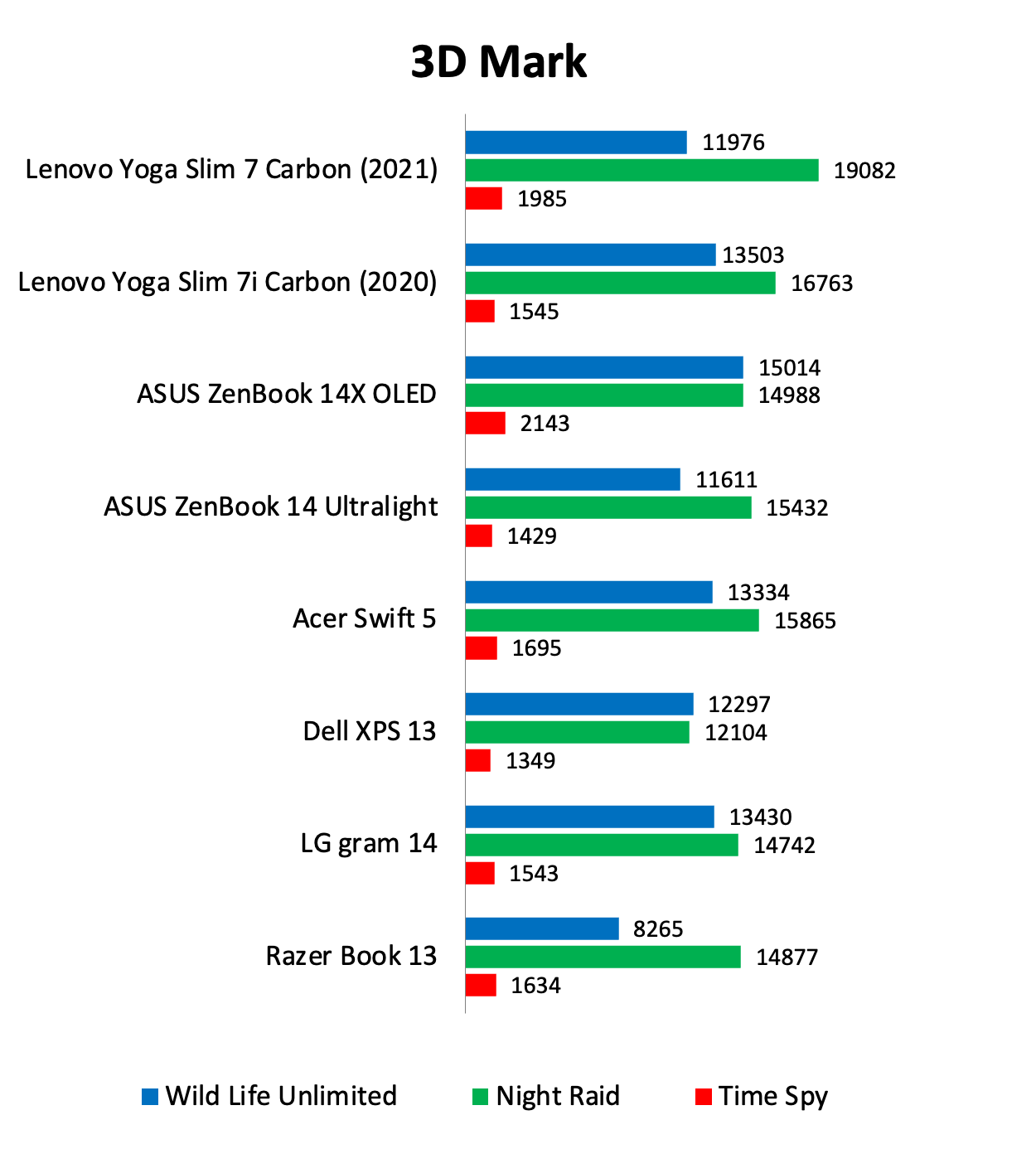 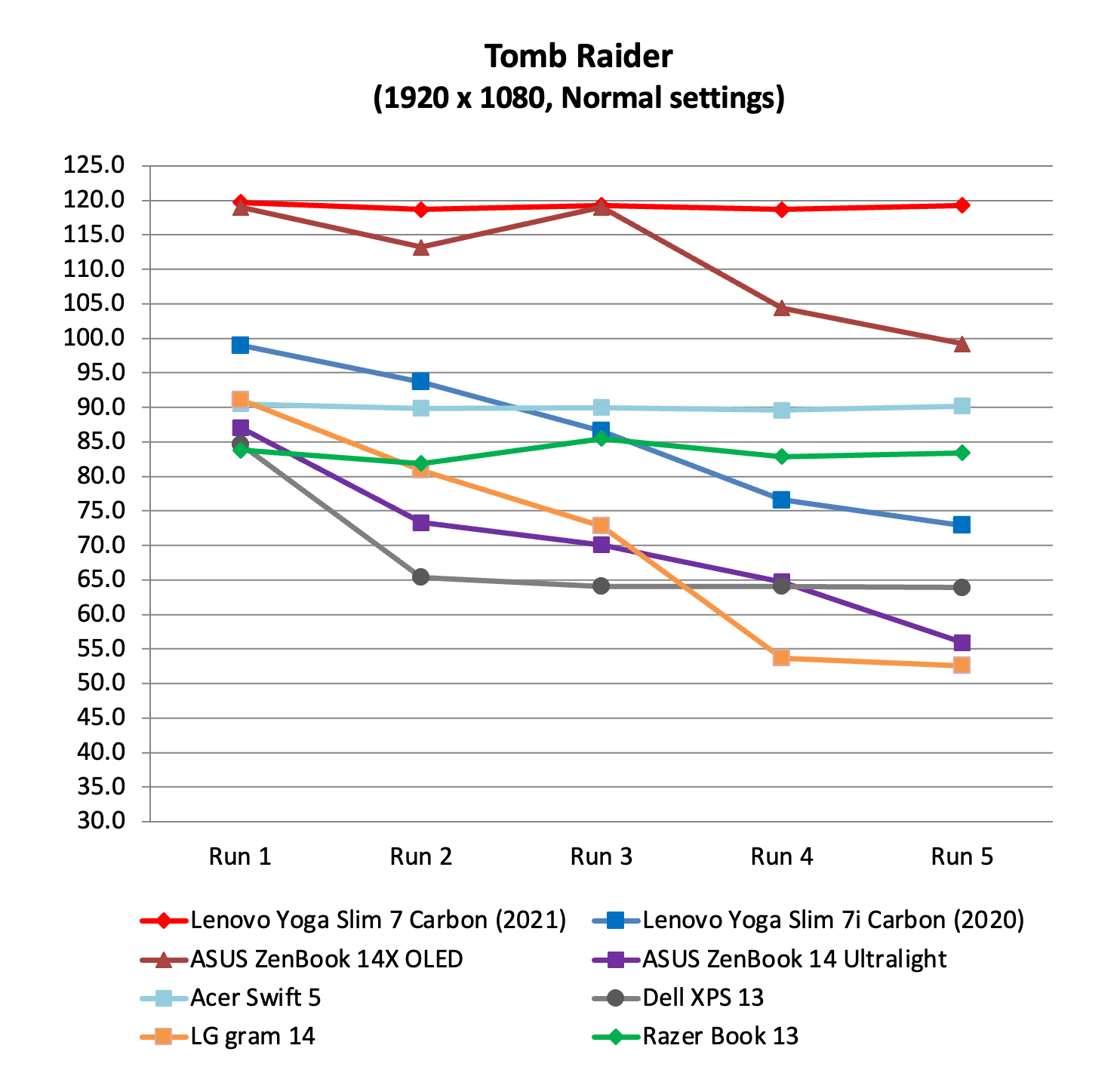 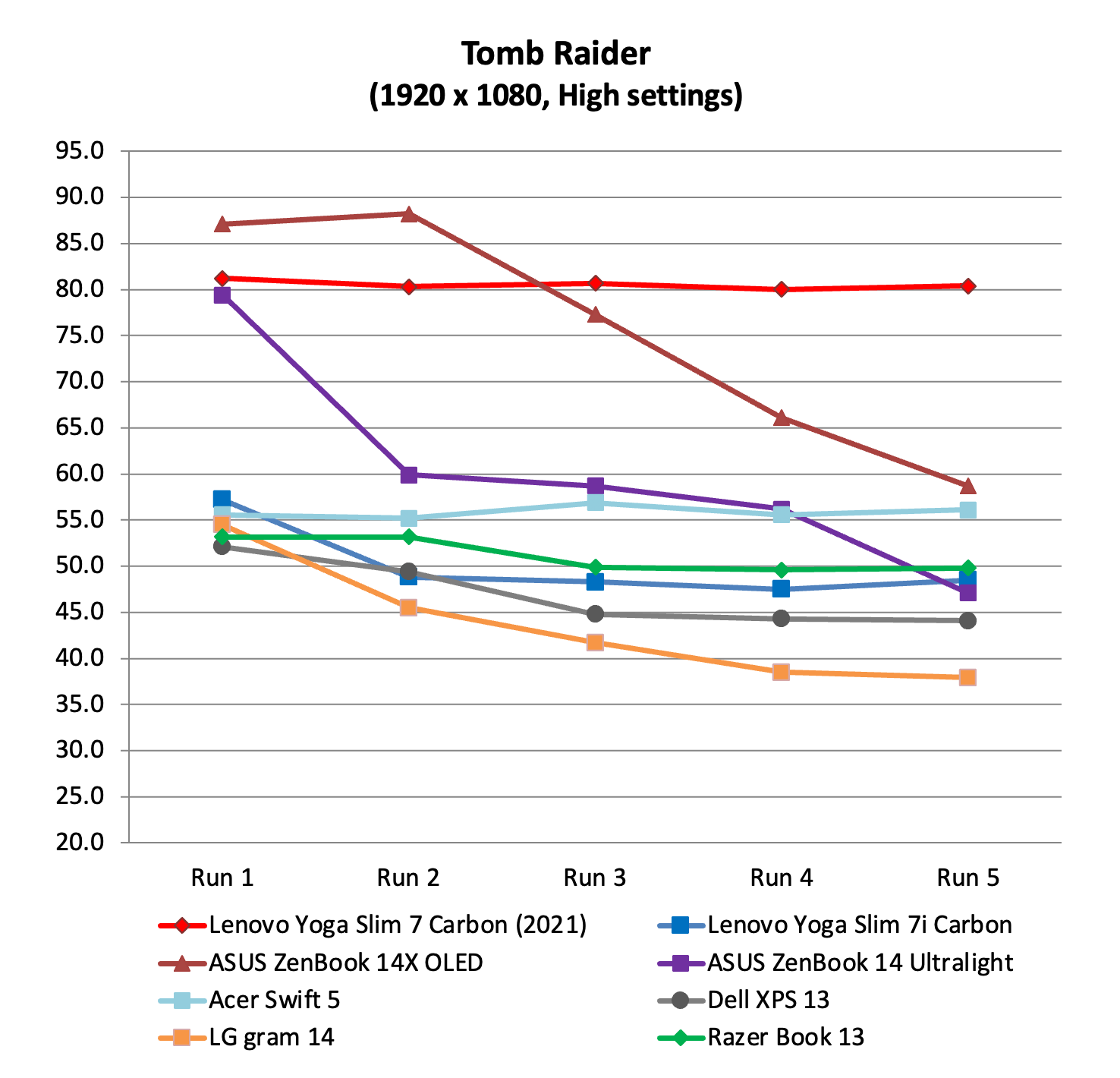 There are two ways to look at the Yoga Slim 7 Carbon’s battery life. Cynics will point out that it lasted shorter than last year’s Slim 7i Carbon despite having a larger battery. Those who are more optimistic will say it offers more performance and yet lasted well over 8 hours even with its display set to maximum brightness. Both perspectives are valid. Overall, I think it’s best to categorise its battery life as quite good. Interestingly, it’s a lot better than the other recently released 14-inch OLED notebook – the ZenBook 14X OLED. Another thing worth noting is that it charges very quickly. It gets from 0% to around 50% in just half an hour. 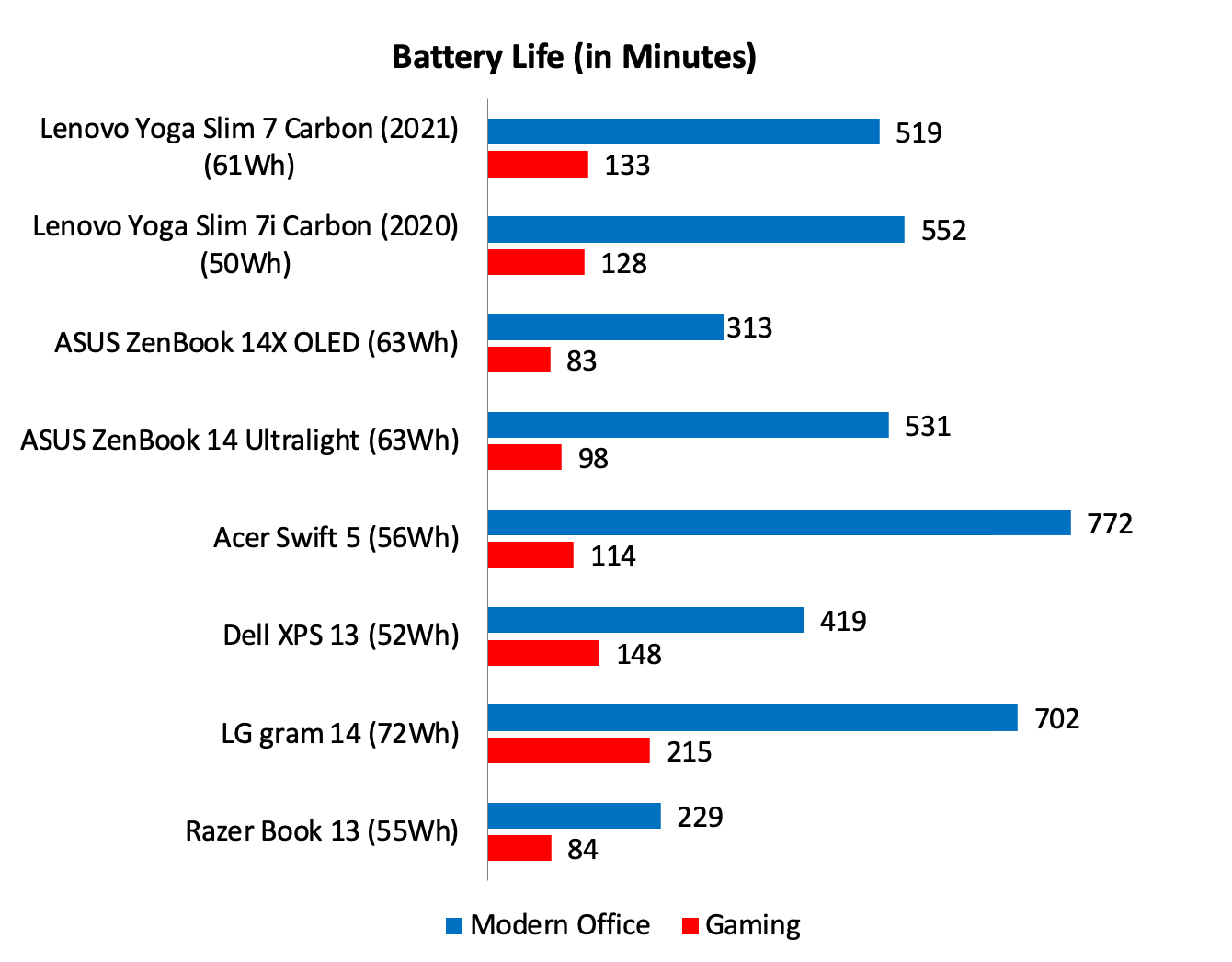 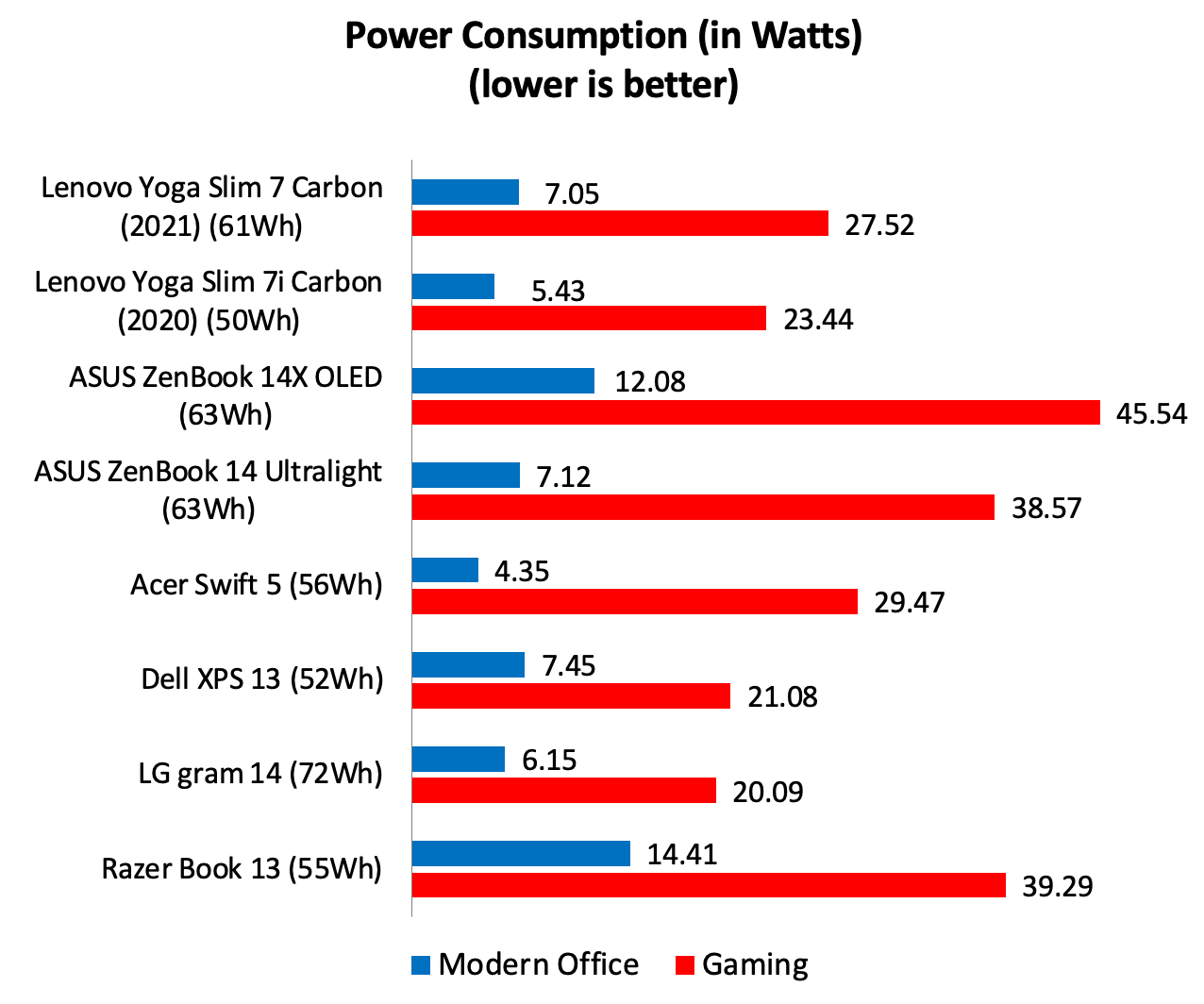 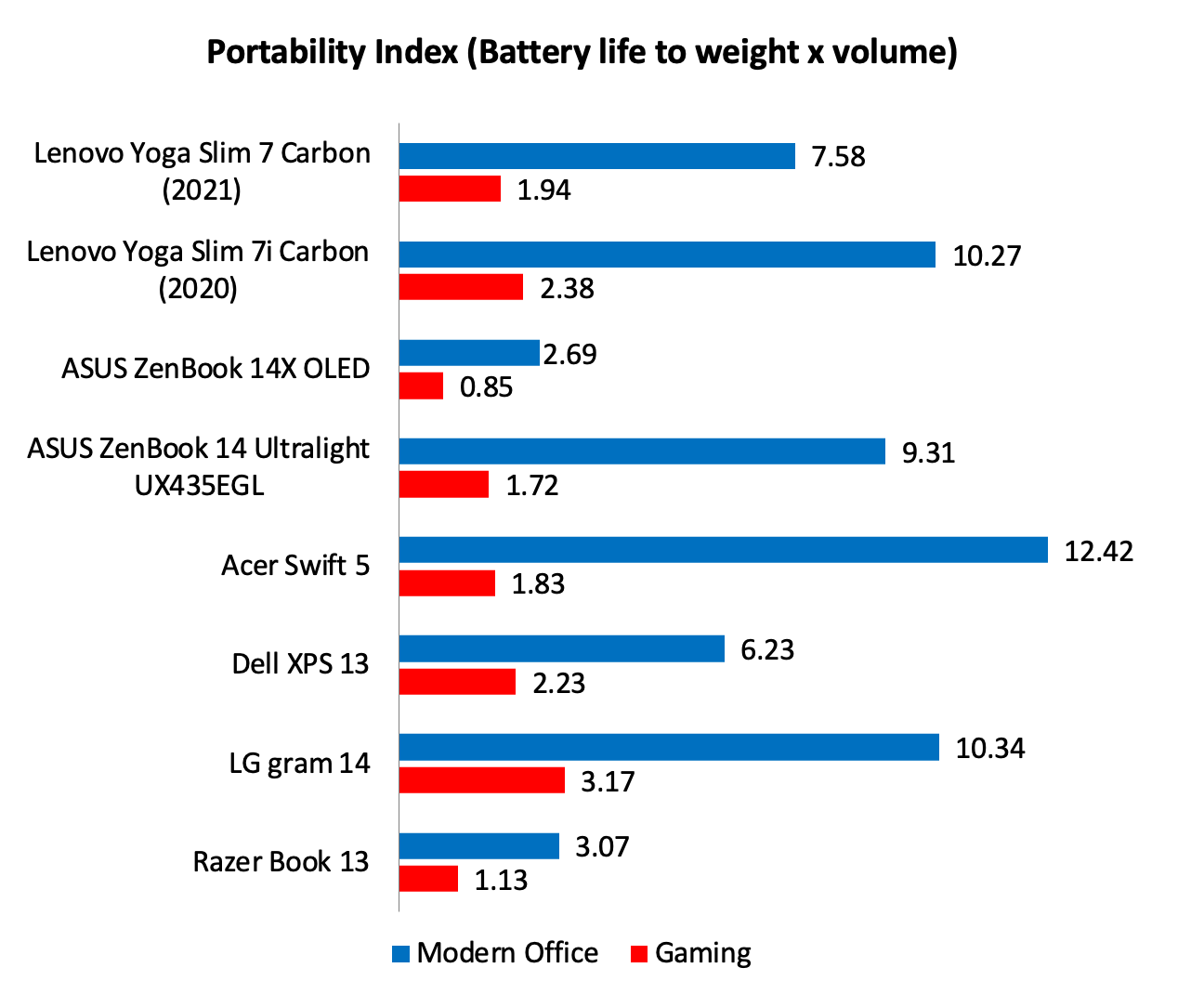 So close to being perfect

Last year’s Yoga Slim 7i Carbon won our Tech Awards because of its unassailable blend of performance, portability, and price. And this year’s model is equally good because it has these same qualities. Performance has been improved but at no cost to portability, and it even gets an excellent OLED display. Perhaps the most incredible thing of all is that it is priced so competitively. For many readers, I think this can be their perfect notebook. 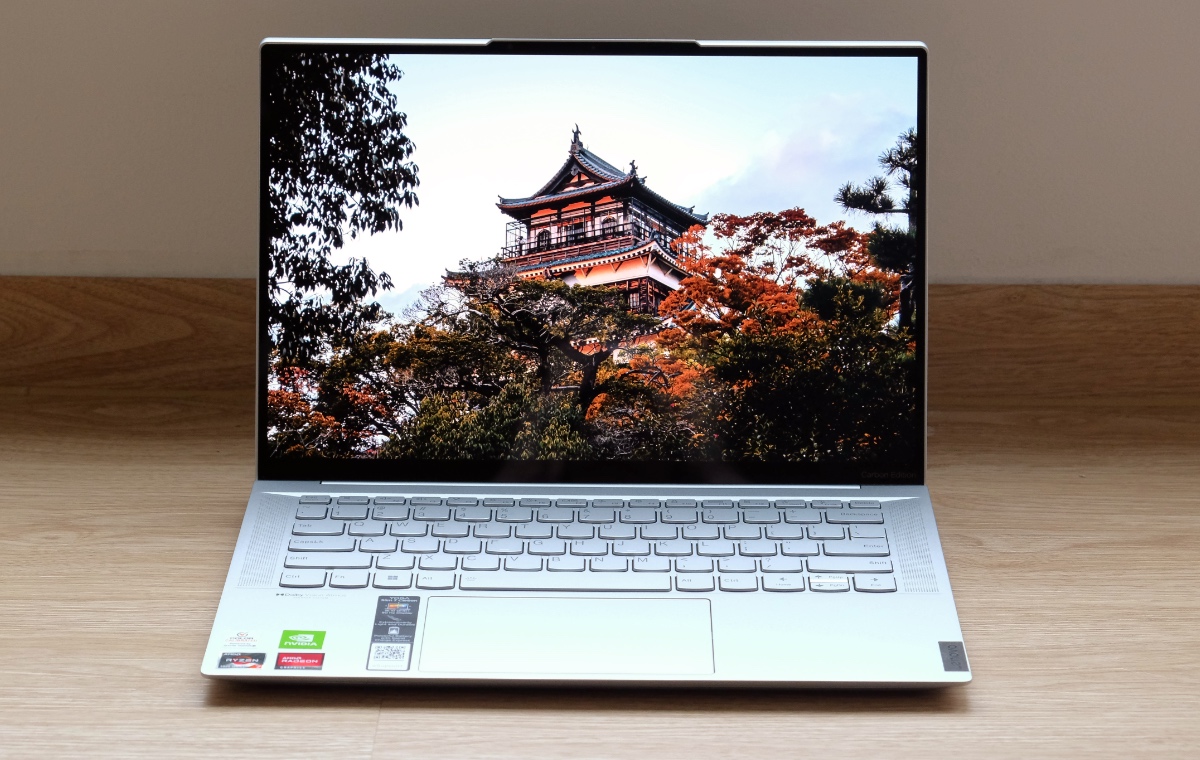 But before you rush to click on the buy button, there’s at least one thing to consider. The Yoga Slim 7 Carbon’s biggest downfall is arguably its lack of Thunderbolt support. Granted, not everyone uses Thunderbolt accessories but it’s nice to have because it opens up a world of possibilities such as crazy-fast external storage, external graphics docks, and feature-packed docks. Less glaring shortcomings include the lack of a 1TB storage option, a dismal webcam, and a somewhat fussy trackpad.

Even with its flaws, this is a very complete and solid notebook. There's no doubt that it will be amongst the forerunners in next year’s Best Ultraportable Notebook category.

You can order the Lenovo Yoga Slim 7 Carbon from the Lenovo web store, the Lenovo Flagship Store on Lazada, or the Lenovo Official Store on Shopee. Prices start at S$1,699.

Write a Review
Compare This | Specifications
Excellent performance
Gorgeous OLED display
Thin and light
Attractively priced
Nice keyboard & large trackpad
Above average speakers
USB-C ports don't support Thunderbolt
No touchscreen
Dismal webcam
Only half the trackpad can be clicked
Our articles may contain affiliate links. If you buy through these links, we may earn a small commission.
Sponsored Links