Lenovo ThinkBook 13s review: A business notebook that you can use for play

How does it perform? 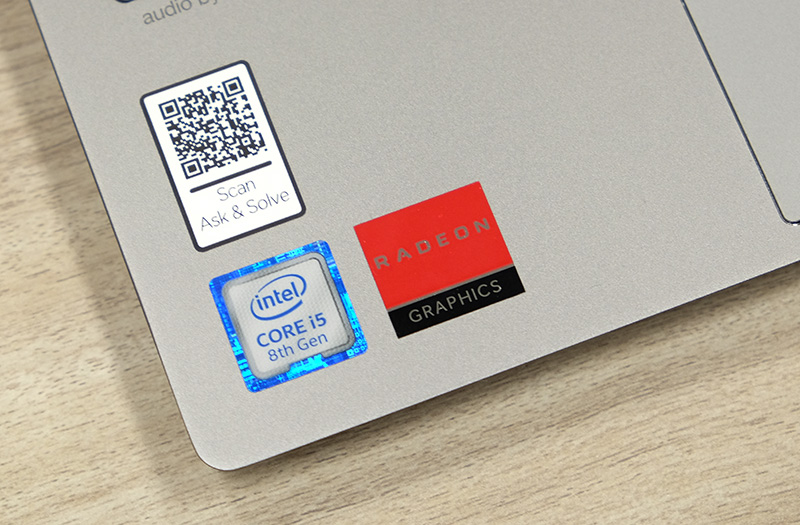 Thanks to its capable mid-range Core i5-8265U processor and speedy PCIe SSD, the Lenovo ThinkBook 13s performed admirably in our benchmarking tests. Also, its discrete graphics chip meant it was significantly faster than notebooks which had to rely solely on Intel’s integrated graphics solution. That said, the Radeon 540X was clearly not a match for notebooks with NVIDIA graphics. The MSI Prestige and Razer Blade Stealth, which are both powered by the NVIDIA MX150 GPU, racked up significantly better scores on 3DMark and Tomb Raider. Still, the important takeaway is that the ThinkBook 13s should be able to run mainstream games fairly well even at Full-HD resolution as long as you turn the graphics settings down.

Also, it's worth mentioning that the discrete GPU wasn't activated when I first ran Tomb Raider. For some reason, the integrated GPU was used which resulted in scores that were much less than I anticipated. Fortunately, this can be easily fixed by installing the Radeon Software from AMD. 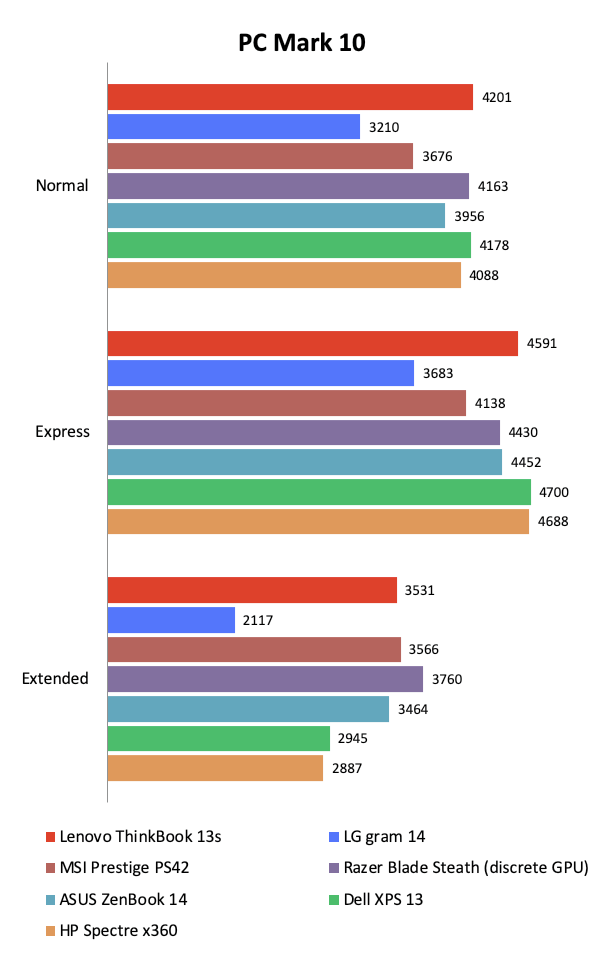 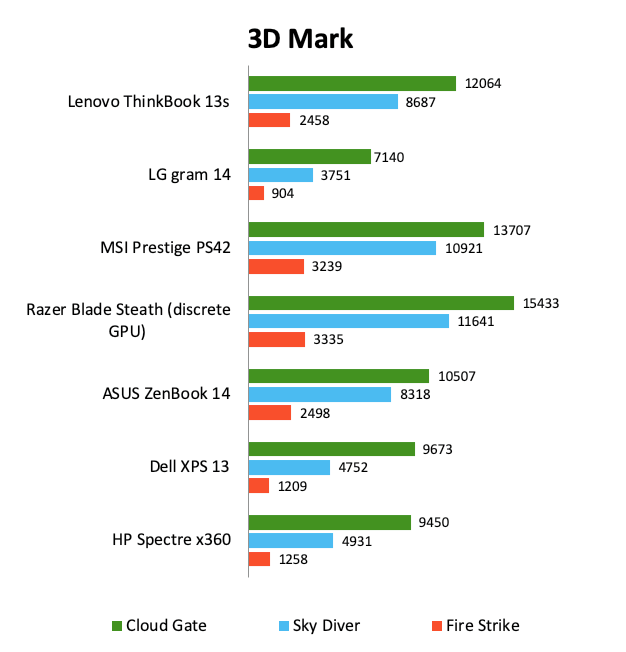 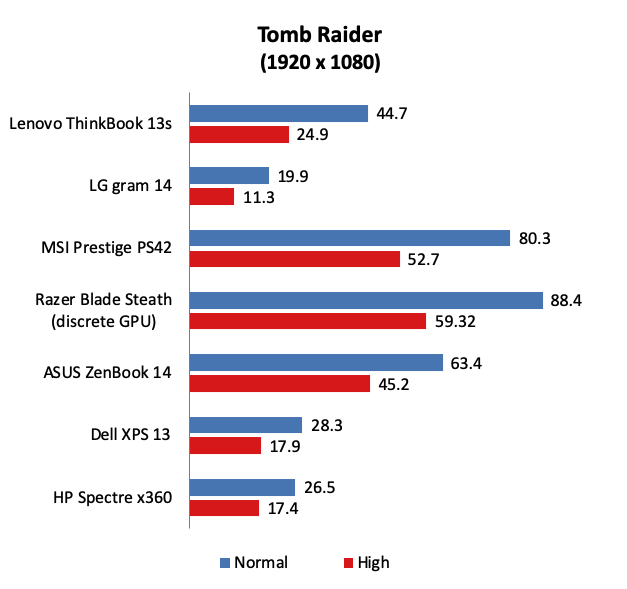 How long can its battery last?

We used PCMark 10’s new built-in battery benchmark to evaluate the Lenovo ThinkBook 13s’ battery life. Since we only started using this benchmark recently, we are still building up results, hence the shorter list of comparison notebooks. We tested the notebooks on the Modern Office and Gaming workloads. The first simulates regular daily use with web browsing, word processing, and video conferencing workloads. The Gaming workload is self-explanatory and represents a worst-case scenario of how long the notebook will last if it was taxed to the maximum.

At any rate, the ThinkBook 13s’ battery life — at over 5 hours long in Modern Office and nearly 1.5 hours in Gaming — was decent bearing in mind that it has the smallest battery at just 45Wh. Even the Spectre x360’s battery capacity is over a third larger. Looking at the power consumption figures, we can see that it's slightly higher than its rivals ― possibly because of its discrete graphics chip. But overall, its power consumption wasn’t too high.

Moving to the Portability Index, which takes into account battery life, dimensions, and weight, we can see that ThinkBook 13s recorded the lowest scores. But then, we have to remember that it’s up against notebooks with far larger batteries. Furthermore, the ASUS VivoBook S14 and LG gram 14 are two notebooks that were designed with extreme portability and long battery lives in mind. If it's any consolation, the ThinkBook 13s has fast charging capabilities and can reach an 80% charge from zero in just an hour. 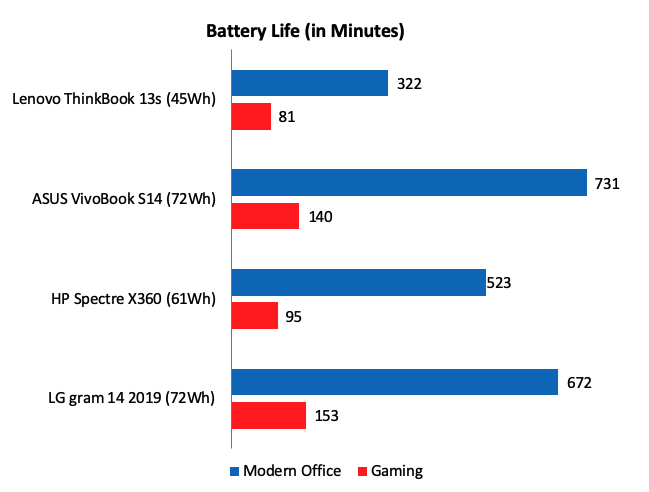 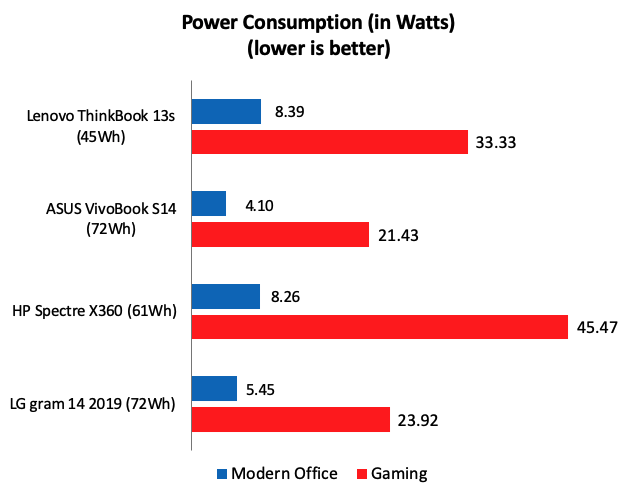 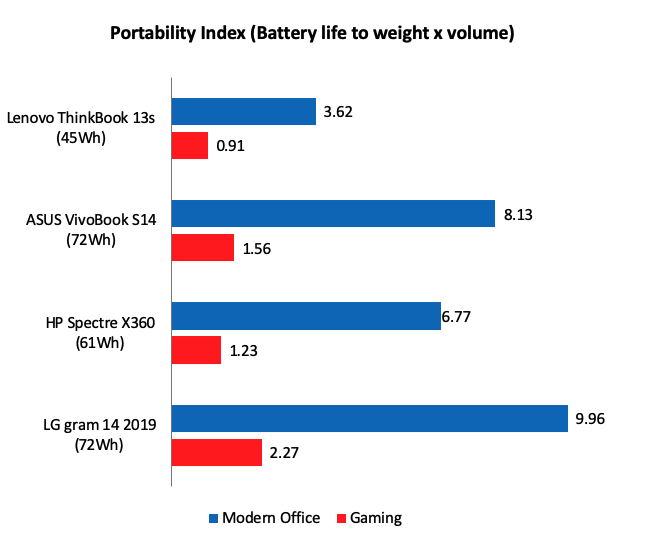 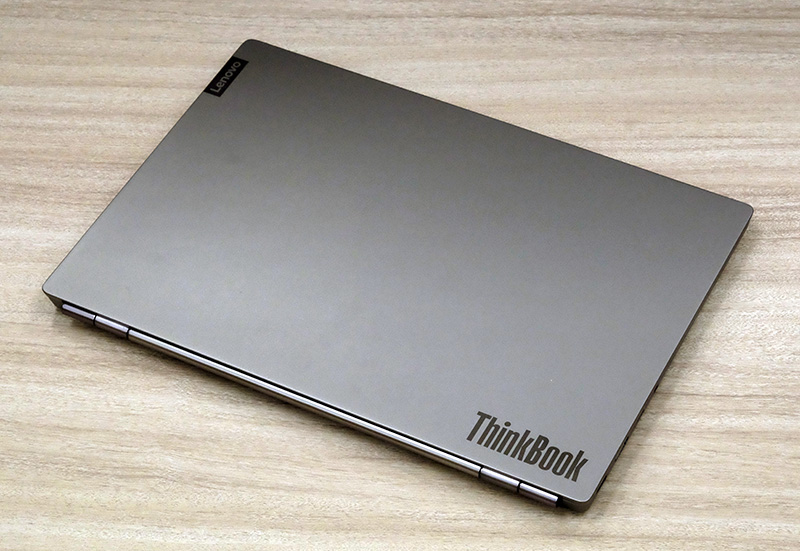 There is an increasing emphasis on business notebooks that straddles the line between work and play and the Lenovo ThinkBook series is one of the more affordable options. All things considered, it’s a decent attempt by Lenovo and one that actually offers quite a lot of value considering it has basic business security features and decent performance in both productivity and gaming benchmarks. Build quality is also high and there are no glaring faults to speak of save for its lacklustre display and lack of Thunderbolt 3 support, memory card reader, and USB-C charging.

The recommended retail price for the configuration tested is S$1,599 but it seems like Lenovo often runs promotions on its online store and you can easily get it for less. At the time of writing, there’s an e-coupon that you can apply that brings the price down to S$1,487. 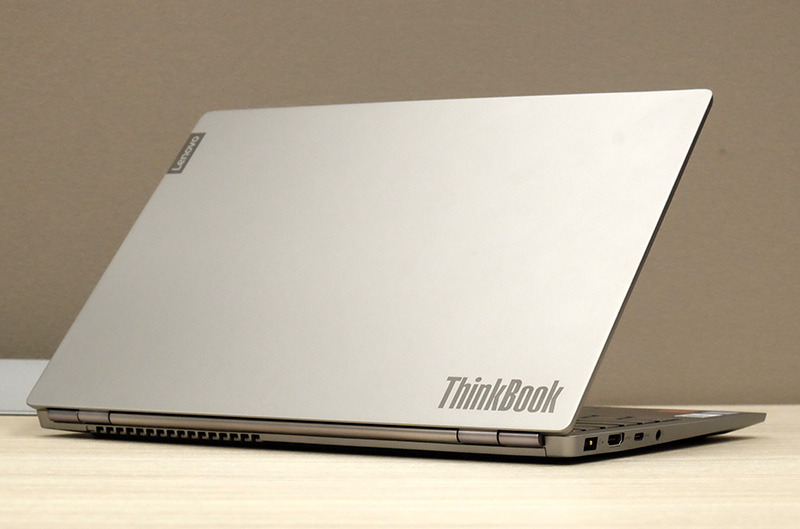 While it sounds enticing, there are cheaper alternatives. ASUS’ ZenBook 14 UX431 and Acer’s Swift 3 Premium have comparable configurations with discrete NVIDIA graphics and they are priced at S$1,398 and S$1,198 respectively. What they lack, insofar as specifications are concerned, are the security features of the ThinkBook 13s like the TPM chip and webcam privacy shutter. If these security features are important to you, then the choice is clear. The Lenovo ThinkBook 13s is a compelling option given its price, features, and specifications. For everyone else who just wants a notebook for general computing purposes and light gaming, know that there are other alternatives worth checking out.