To be honest, it is difficult to assess the Lenovo Phab 2 Pro.

Is it a good phone? Lenovo has certainly done a good job in integrating all of the sensors into a 'phone' form factor, although one can argue that it is more of a tablet than a phone. The synchronization and coordination of the different sensors are of high fidelity, which allows the phone to track motion and distances accurately. The camera, although not world class, is of high quality for augmented reality purposes. Overall, in terms of hardware and firmware, the Phab 2 Pro is top notch in its own class.

However, good hardware, without good software offerings is pointless. At the point when Phab 2 Pro was released, there were very few Tango apps. To make matters worse, some of the apps suffer from fragmentation and, while they run fine on the Tango Dev Kit, they do not work on the Phab 2 Pro. This was notable on apps that were developed since the inception of Tango Dev Kit, way before Phab 2 Pro was announced. Even Google's own apps, such as Constructor and Area Manager, crashes on the Phab 2 Pro!  Though they had recently updated Constructor to work with Phab 2 Pro, it took the Google team more than three months to rectify. Not only that, the update broke compatibility with the Tango Dev Kit, underscoring the fragmentation of the Tango ecosystem. The serious utility apps suffered the worst; most crashed either on start, or randomly during use. 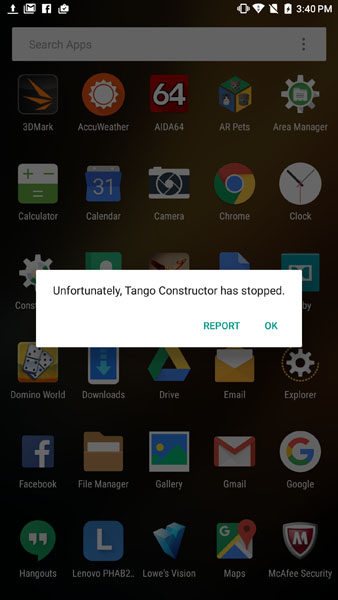 For those that did work, unfortunately, none of them are related to flagship titles, products, brands or killer use cases. Without these in the Tango bandwagon, there will not be a pull effect on the consumers to purchase this phone, nor any Tango phone for that matter. Imagine, what if Pokemon Go implement true AR on top of their ordinary game stack? Instead of looking at a map for Pokemon, the gamers would use the Tango as a ‘window’ to find virtual Pokemon and Poke Stop overlays. Surely, that would have attracted even more people to engage and appreciate the Tango platform. However, that is only a figment of our imagination.

Google had hoped that the Tango Dev Kit can inspire developers to develop Tango apps, and that later on, a consumer-level Tango phone, like the Phab 2 Pro, will be ready for developers to deploy their Tango apps. However, in my opinion, Google probably made two major mistakes when developing Tango. First, they made major shifts in their Tango SDK. This was done to accommodate the plethora of future Tango devices, but it was made too close to the launch of Phab 2 Pro - developers needed time to react. The second major mistake was not updating the Tango Dev Kit’s OS. It is still stuck at Android 4.4.2. While they emphasized that for Tango technology, it is the SDK that matters, more than the Android version, there must be a good explanation as to why apps that worked well in Tango Dev Kit, crash in Android 6.0-powered Phab 2 Pro. With such a release strategy, the Phab 2 Pro did not become the deployment-ready device they hoped it to be; it became the new Tango prototyping device for developers and researchers to re-work their code all over again.

Better for purpose-specific deployment than for consumers

While the Phab 2 Pro is an excellent engineering feat in its own right, without a good suite of apps and games, we do not anticipate that consumers in general will be able appreciate this phone, especially with its heavy weight and large size. No consumer will want a bukly device unless there are strong benefits, such as the Pokemon concept mentioned earlier. Instead, given that it has become the new prototyping Tango device, there is more value in marketing the device to researchers, enterprises, particularly those B2B enterprises specializing in serious games.

Lenovo can only do so much in the hardware side. Moving forward, Google should stay consistent in the development of Tango technologies. The strategy should be revamped as well; get flagship names on board the Tango train, so as to excite the masses on AR technologies. Google should get serious on AR and Tango, and to ensure that there is little or no fragmentation, so as to ensure that developers do not have to perpetually chase a moving target. It does look like Google is getting serious though, as they appear to be hiring Developer Advocates and Tango Technical Managers in Singapore.

In conclusion, the Phab 2 Pro is excellent Tango showcase device for the audieance at large, but not prime-time for consumers to pounce on just yet.

For now, your most accessible touchpoint as to what the Lenovo Phab 2 Pro can deliver and experience augmented reality when well implemented would be to check out the recently opened permanent virtual rainforest exhibit at Singapore's ArtScience Museum - Into the Wild - which uses the Lenovo Phab 2 Pro as the discovery platform. The best part is that it's free! Head over here for our experience and what you can expect :) 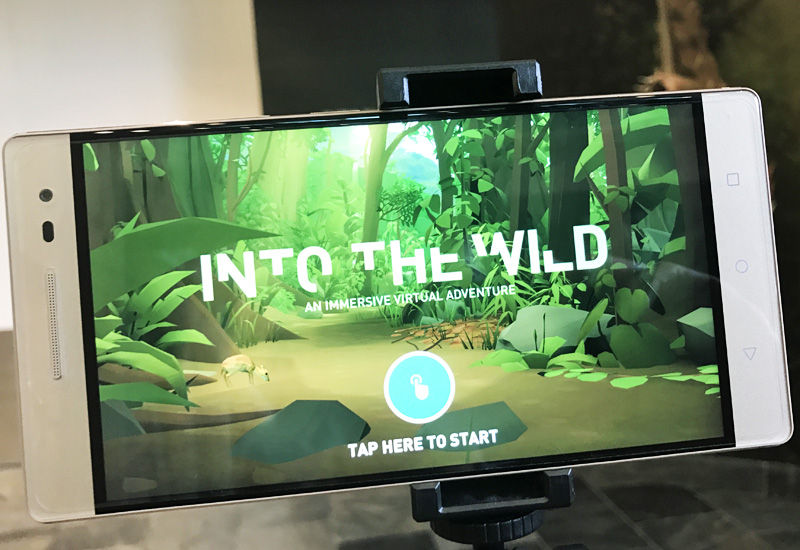