I've included a mix of GeForce RTX 2070 and 2080 Max-Q notebooks for a look at how the Legion Y740 stacks up against the immediate competition. In addition, the Razer Blade (2018) is thrown in as well to provide a measure of how much faster the Legion Y740 is than last generation's GeForce GTX 1070 Max-Q.

The Lenovo Legion Y740 scored quite well overall in PCMark 10 Extended, beating even some of the notebooks equipped with the more powerful GeForce RTX 2080 Max-Q. However, PCMark 10 Extended is comprised of many separate benchmarks, and while the Legion Y740 naturally fell behind the GeForce RTX 2080 Max-Q laptops, it had an especially strong showing in the Digital Content Creation workloads, which helped it inch ahead. The GeForce RTX 2070 Max-Q in the Legion Y740 features an 885MHz base clock and 1,185MHz boost clock. This is lower than the 985MHz base clock on the same GPU in the ASUS ROG Zephyrus S GX531GW, which may account for the slightly lower scores in some of the 3DMark tests and gaming benchmarks.

However, the difference is not that significant, and there was generally just a 3 to 5 per cent gap between the two laptops. Compared to the GeForce GTX 1070 Max-Q from the last generation, the GeForce RTX 2070 Max-Q in the Legion Y740 still represents a decent step up, and it is around 20 per cent faster. Updated 6 May 2019: Lenovo has since told us that the review unit was still a prototype, so it's possible that the battery life on retail units may be better.

Unfortunately, battery life is where the Legion Y740 really falls on its face. It lasted a mere 71 minutes, whereas the ASUS ROG Zephyrus S GX531GW, which has the same GPU and only a marginally larger 60Wh battery, lasted more than three times as long. This was even after enabling NVIDIA's Optimus technology in the NVIDIA Control Panel.

The Legion Y740 had the highest power consumption of the lot, outstripping even the laptops equipped with a more powerful GeForce RTX 2080 Max-Q. It goes to show that not all Max-Q laptops are as power efficient, and that getting a Max-Q laptop doesn't automatically guarantee you better battery life.

However, this is particularly disappointing because the Legion Y740 is thicker than most of the competition at 22.45mm thick. It'd have been nice if Lenovo managed to cram a larger battery in there, to make up for the laptop's poor power efficiency.

The subpar battery life also dragged the Legion Y740 down in the portability index, which is intended to be a measure of how portable a laptop is, after taking into account factors like weight, dimensions, and battery life. The Legion Y740 will not do well away from a power socket, and you should definitely have your power adapter handy at all times.

Speaking of the power brick, it's absurdly large and clunky, even though it's just a standard 230W unit that just about everyone is using. It occupies around a quarter of the laptop's surface area, and it only makes the laptop even less portable. 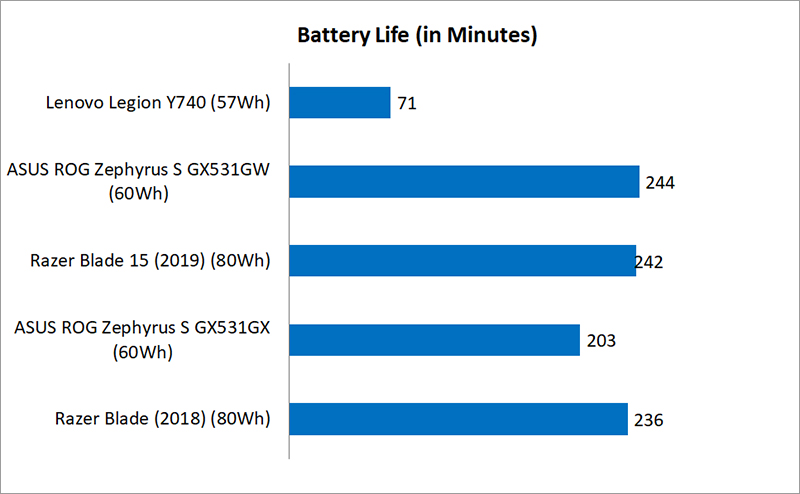 Given that the Legion Y740 is thicker than many Max-Q gaming laptops on the market, it seems reasonable to expect that cooling should be slightly better. Fortunately, it generally is, and the laptop recorded the lowest peak temperature on the GPU after running a stress test comprising 40 loops of 3DMark Fire Strike Extreme. In addition, it also posted among the lowest surface temperatures, and I found that it remained relatively cool to touch throughout my testing.

Of course, most of the testing was done in an air-conditioned room, so you should expect the laptop to feel warmer if you're gaming without the AC on. Write a Review
Compare This | Specifications
Good gaming performance
Excellent cooling system
Not as noisy as other Max-Q laptops
Pretty good value for money
Poor battery life
Thicker than most of its competitors
Slightly dated design
Keyboard layout not optimal
Bottom-mounted webcam
Bulky power brick
Our articles may contain affiliate links. If you buy through these links, we may earn a small commission.
Sponsored Links