Is this a gaming notebook? 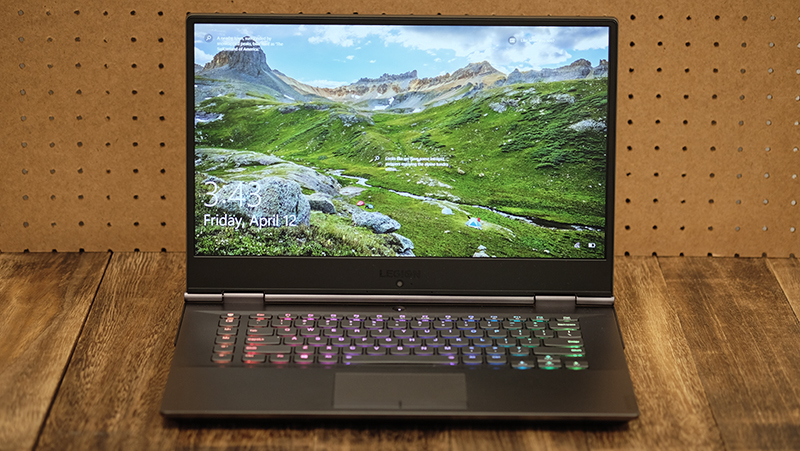 The Lenovo Legion Y740 is a gaming laptop that looks like it could be a giant ThinkPad. The slate gray aluminum lid is plain and mostly unadorned. The only design element here is the Legion branding stamped on the side, but there's also an illuminated Legion logo hidden in the letter 'O' should you want an added bit of flair (the vents at the side light up as well, which is pretty cool). 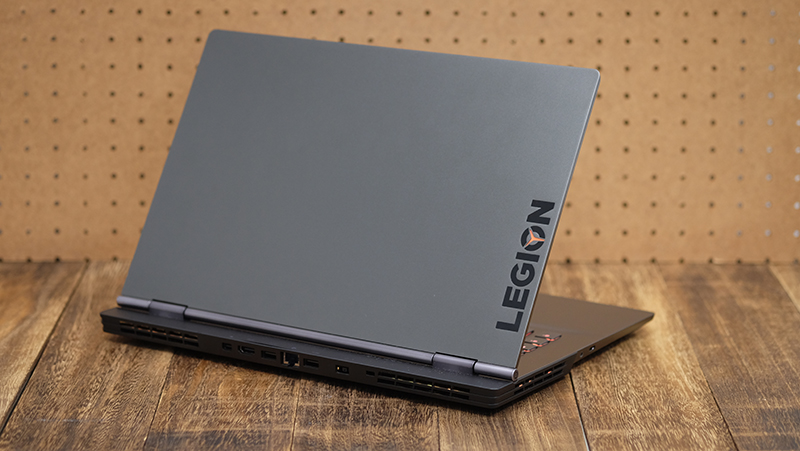 However, while I appreciate the simple design, the laptop can also feel a bit dated at times. The lid and sides are fine, but open it up, and the keyboard and trackpad give the impression that they're from a laptop that came out several years ago. There's nothing wrong with them per se, but the Windows Precision trackpad feels small and cramped and the fonts look like they could have used a more modern alternative. What's more, Lenovo is still using actual physical buttons on the trackpad, when integrating them with the trackpad would probably have looked better. In comparison, while the Razer Blade 15 has a pretty minimalist look as well, it still feels very modern. 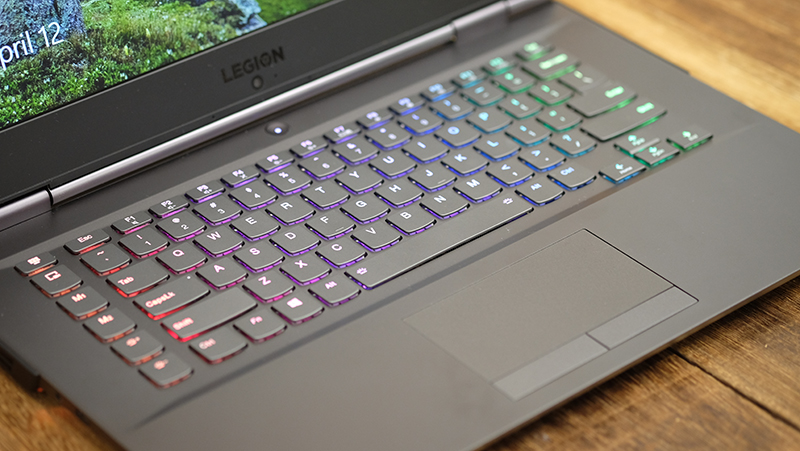 It's the details that matter, and I think Lenovo could also have done away with the angled sides around the keyboard and the round power button at the center. In addition, it'd have been nice if the keyboard wasn't framed by empty space and there was a more efficient utilization of the available room.

Speaking of the keyboard, the keys on the left feel slightly extraneous. For instance, there are two dedicated macro keys, backlight adjustments, and even a Lenovo Vantage key. That space could have been used to make the keyboard more comfortable or maybe even squeeze in a number pad, and the Vantage software doesn't even do enough to justify having a dedicated key. In fact, most of what you can do with it center around programming the macro keys, prioritizing game packets in your network, and optimizing performance by adding applications to a list so they'll close automatically when your game is running.

The interface also doesn't feel very intuitive, and I can't see myself launching Vantage that often. One vital feature that's missing, especially on a software that ships with a gaming laptop, is the ability to manually set the fan speeds or even just toggle between different performance modes. Hitting Ctrl+Shift+1 will boost the fan speeds, but the laptop is otherwise lacking more fine-grained fan speed controls. 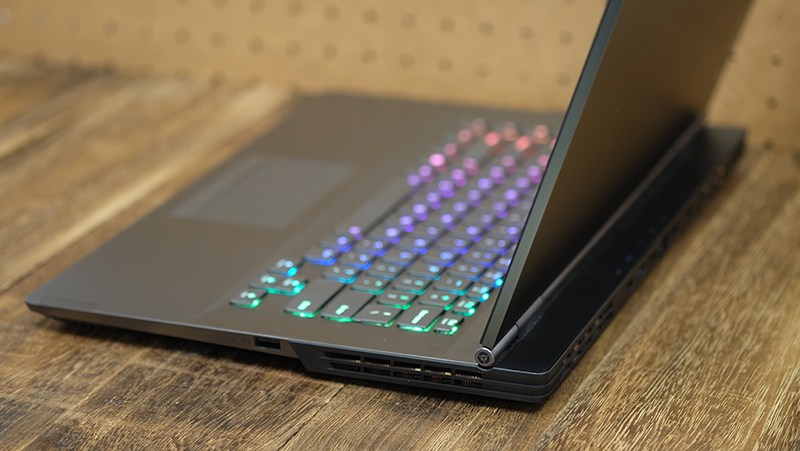 Having said that, there is a section called Legion Edge in Vantage that lists CPU overclocking, RAM overclocking, and even Thermal Mode selection as features. However, it also comes with the caveat that not all features are available on all devices, and it looks like the Y740 is unfortunately missing them.

I'm nitpicking here though, and the Legion Y740 is still overall a pretty good laptop. Build quality feels solid, and while there's some flex around the keyboard, you have to push down quite hard to see it and it's not noticeable while typing. There is 1.7mm of key travel distance and the backlighting is reasonably vibrant, but the typing experience is otherwise unremarkable. There are some issues with uneven lighting on the keys with secondary legends, but it's not glaring enough to bother me that much.

The laptop also ships with Corsair's iCUE software, which offers a range of lighting presets to choose from. There is support for per-key customizations as well, should you want to create something more unique. On top of that, you can adjust the lighting on the logo and side vents independently.

Elsewhere, the 15.6-inch display is framed by thin bezels on three sides, which helps reduce the overall space footprint of the laptop. I'd expect nothing less from a gaming laptop released in 2019 though, especially one at this price point. That said, the bottom bezel is still rather chunky, and it's where Lenovo has stowed the webcam. This bottom placement of the webcam honestly isn't great as it makes for some seriously unflattering camera angles, but most folks can probably live with it if they don't do video calls that often or live stream their gaming session. 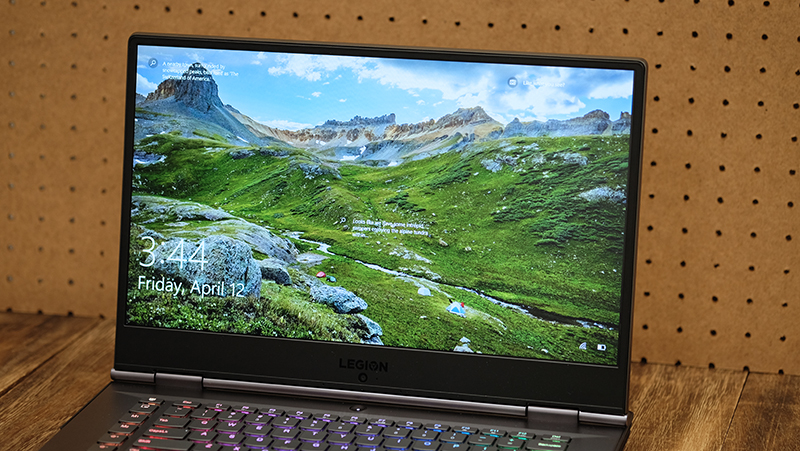 The display itself is a 144Hz IPS panel with support for NVIDIA's G-Sync variable refresh rate technology. This means that games should appear super smooth and fluid with almost no tearing and stuttering, which is definitely good news. The inclusion of G-Sync definitely helps the Legion Y740 score some points against the competition, since there are pricier laptops with no support for that.

However, as with many gaming laptops, the display was a little on the dim side, and I had to run it at maximum brightness to feel comfortable under bright florescent lighting. There was also a cooler tint to the screen, but colors otherwise appeared vibrant enough.

The speakers are a Dolby Atmos-capable system that sit at the bottom on the left and right sides. Generally-speaking, large top-firing units sound better, but these 2-watt speakers are powerful and definitely loud enough with not much distortion. The pre-installed Dolby Atmos app offers a selection of sound profiles, such as Dynamic, Movie, Music, Game, and Voice. You can also create your own EQ profile in the app. I was surprised by how good the speakers sounded, and you can probably ditch the headphones if you're watching a movie. That said, you'll still want to put them on in game where positional accuracy and maximum clarity is more important.

The laptop is equipped with a decent selection of ports and connectors, distributed across the sides and back. In total, it features one Thunderbolt 3, one USB 3.1 (Gen 2) Type-A, two USB 3.1 (Gen 1) Type-A, one Mini DisplayPort 1.4, and one HDMI 2.0 port. In addition, there is a Gigabit Ethernet jack located at the back, alongside the display outputs and two USB ports. The inclusion of the Thunderbolt 3 port is pretty great, as for some reason it still isn't yet a standard feature on many gaming laptops. 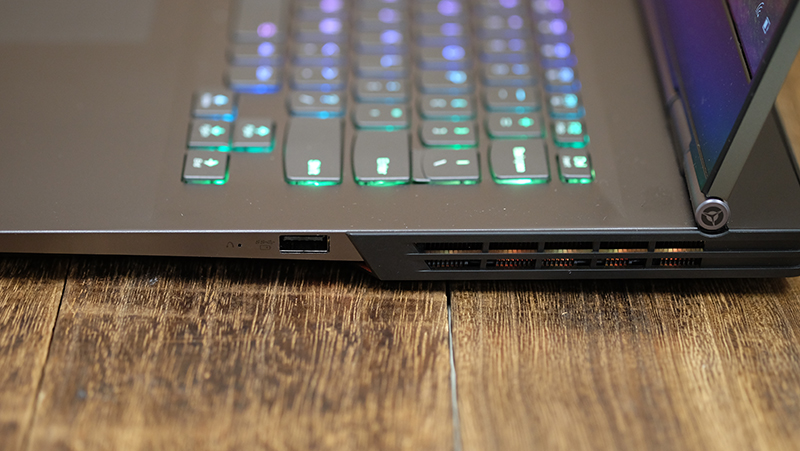 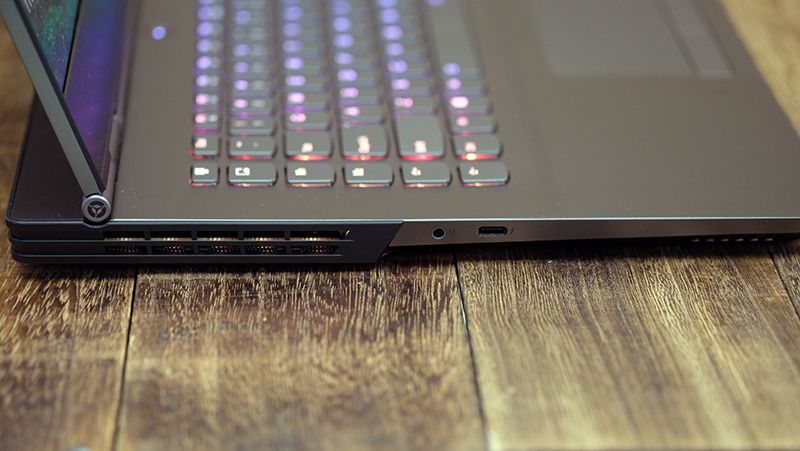 Because of the slightly forward location of the display hinge, there's also room at the back for helpful illuminated labels of individual ports. There are some issues with uneven lighting here and they're not all equally bright, but they do save you the trouble of having to crane your neck to identify them correctly. 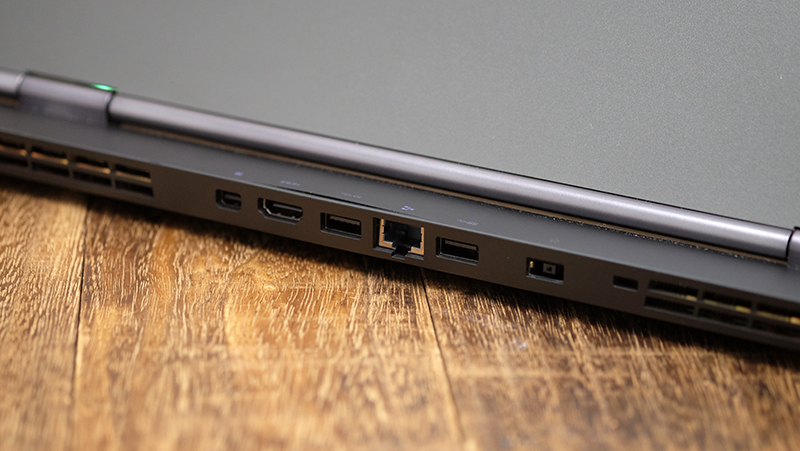 Performance-wise, the Legion Y740 is pretty great. As you'll see on the next page, it's fast and competitive, mostly holding its own against other similarly configured laptops. However, it's the cooling performance that's pretty impressive. I'm not talking about CPU or GPU temperatures, which you can also see in the results section, but rather how cool the palm rests remain throughout.

Lenovo says that it improved the cooling system for this generation of laptops, and it shows. The laptop pulls in air through large openings at the bottom and dumps hot air out generous vents at the sides and back. It calls this system Coldfront, and it also comprises a dual-channel thermal management design, with dedicated cooling for both the CPU and GPU. Lenovo tells me there's a water-resistant film on the keyboard as well, which helps to reduce surface heat.

Write a Review
Compare This | Specifications
Good gaming performance
Excellent cooling system
Not as noisy as other Max-Q laptops
Pretty good value for money
Poor battery life
Thicker than most of its competitors
Slightly dated design
Keyboard layout not optimal
Bottom-mounted webcam
Bulky power brick
Our articles may contain affiliate links. If you buy through these links, we may earn a small commission.
Sponsored Links