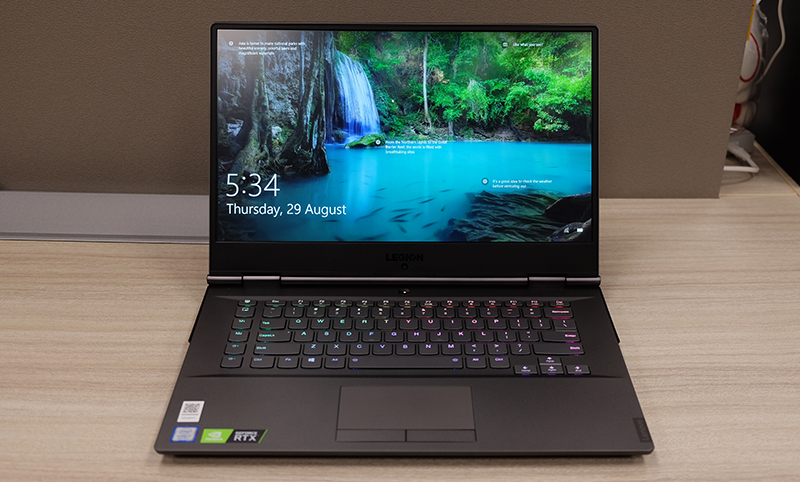 I've actually reviewed the Legion Y740 with the Intel Core i7-8750H, so you can head over to that article for a more in-depth look at the laptop. The Legion Y740 with me today is the exact same laptop – it's just been updated with Intel's newer Core i7-9750H – so I'll just be going over the key points of the notebook here.

As I mentioned in my earlier review, the Legion Y740 is really a gaming laptop with ThinkPad DNA. Turn the lights off, and it could blend into a board meeting with little trouble at all. 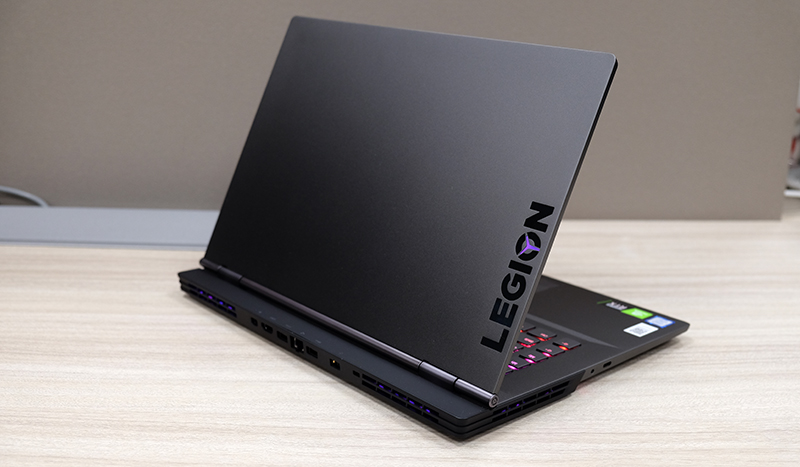 The Legion Y740 stands out for me in a couple of key ways – design and price. It's still not that easy to find a gaming laptop that isn't screaming for attention in some way. And when they do exist, such as with the ASUS ROG Zephyrus S GX502 and Razer Blade 15, they're also more expensive while offering less. For instance, the GX502 ships with just single-channel memory, while the Blade 15 only comes with 16GB of memory.

The muted look on the Legion Y740 is also its most unique selling point, and when you combine that with its very attractive specifications and price, it's clear that Lenovo has come up with quite an interesting formula.

It's not just about the hardware specifications though. Lenovo has also included features and a wide range of connectivity options that are quite nice to see at this price point. One of these is support for NVIDIA G-Sync, which when used together with the 144Hz refresh rate should provide a really fluid and tear-free gaming experience. Then there's the Thunderbolt 3 port, which is useful for outputting to an external dock, high-res screens or a speedy external storage array (even a separate graphics enclosure is possible, but we doubt you'll need one with a GeForce RTX mobile GPU in the Legion Y740). 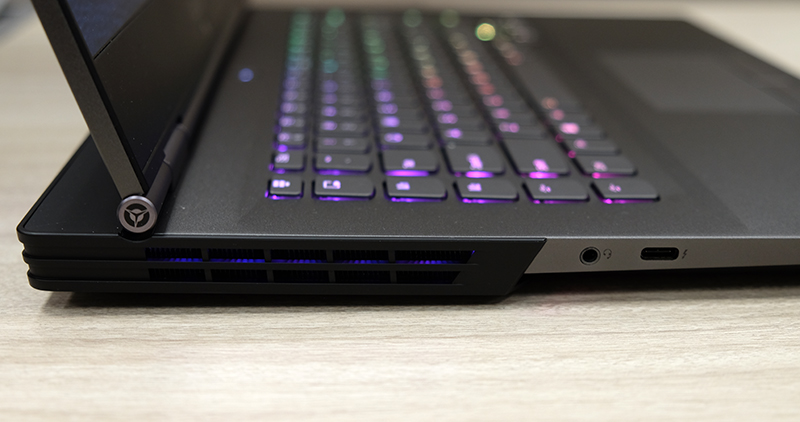 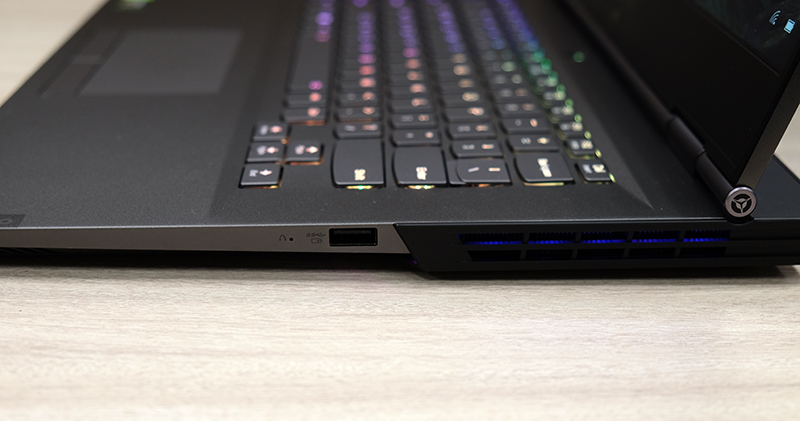 Finally, the speakers support Dolby Atmos, and you can play around with different sound profiles, such as Dynamic, Movie, Music, Game, and Voice. I wouldn't take the Dolby Atmos label too seriously given that these are after all still laptop speakers, but they are one of the better ones I've tested, and I think they'll fare well enough for things like watching a movie.

Build quality is one area that could really be improved. While the gunmetal aluminum body is solid enough, with no concerning areas of flex, the display is an entirely different matter altogether. It almost feels flimsy, with obvious flex at the bottom even when just pushing against it quite lightly. I'm still able to operate the hinge without needing to hold the base down, but that amount of flex really isn't a good look for the laptop. 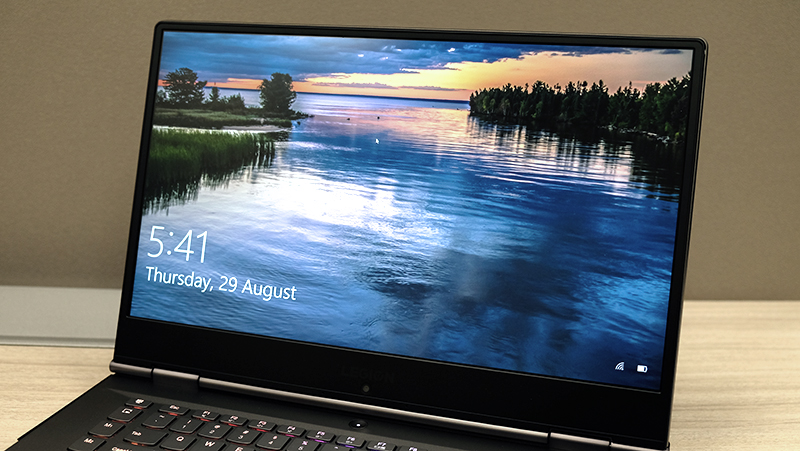 The display was also a little on the dim side, and I had to constantly run it at maximum brightness all the time.

I'm also not a fan of the extra row of utility keys on the left. These comprise two macro keys, two for keyboard brightness, one for recording game footage, and a dedicated half-height key for launching Lenovo's Vantage software. Honestly, do you need dedicated keys for adjusting the brightness on your keyboard? It's not as if you get a ton of brightness levels to work with either, and there are just three. The backlighting on the keys with secondary legends is also very obviously uneven, so I'm not sure why you'd want to have dedicated keys to control a feature that isn't particularly well-implemented. 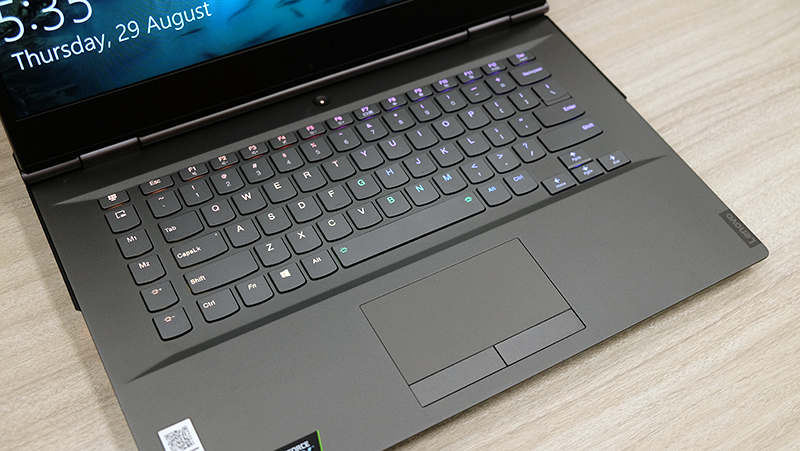 The other keys don't serve much purpose either, and I almost never had to launch the Vantage software beyond checking out what it had to offer. One glaring thing that's missing from it is the ability to manually set your fan speed, a feature I think should be present on every gaming laptop.

I should also point out that while the rear-facing ports are great for when you want to use the Legion Y740 to output to an external monitor, they're less convenient when you're on the go and actually need to access the rear ports frequently. And you will, because most of the ports are in fact located at the back. The illuminated legends do make things easier, but the fact remains that rear connectors are still harder to reach than ports at the side. 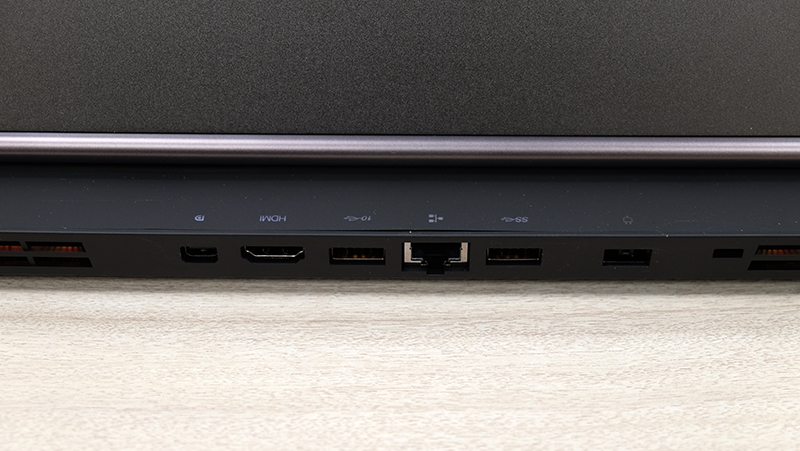 While I said that the Legion Y740's plain design is one of its key strengths, it isn't perfect either. I definitely appreciate what Lenovo is trying to do here, but the design could still use a little finesse and refinement. The overall look of the keyboard and touchpad does feel a little dated, and I think Lenovo could have achieved a more modern look if it went for more angular keys and opted for a larger glass trackpad and integrated click buttons. Who knows, a jet black colour instead of gunmetal gray might have worked better as well.

And then there's the size of the power brick. Put simply, the thing is crazy large. It's nearly as long as the laptop is wide, and it's only an added encumbrance for a laptop that doesn't have great battery life to begin with. Furthermore, the poor battery life means you'll definitely need to bring the adapter out with you, an unenviable task. 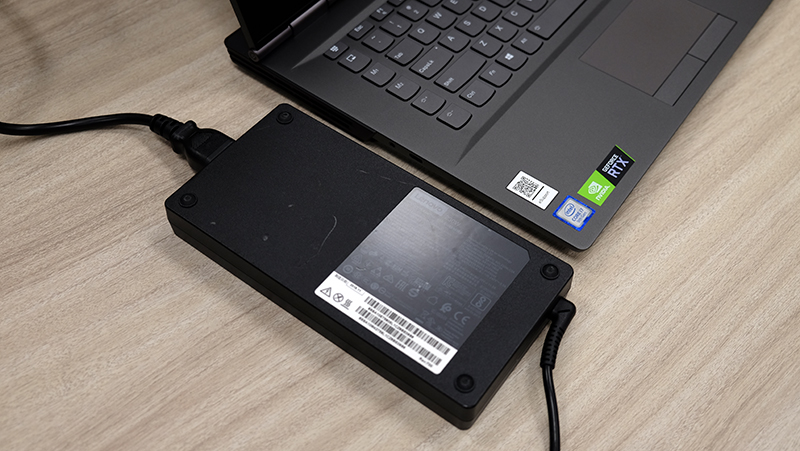