Lenovo IdeaPad Yoga 11 - Power of a Tablet; Portability of a Notebook

Lenovo IdeaPad Yoga 11 - Power of a Tablet; Portability of a Notebook

Is the Yoga 11 really the best of both worlds? 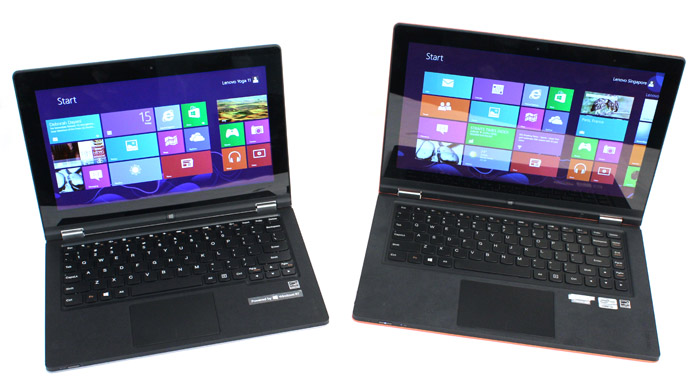 Lenovo's IdeaPad Yoga 13 is a favorite among us for its simple, but well thought out convertible design, with a special patented hinge that allows the screen to flip 360 degrees, letting it easily transition between an Ultrabook and tablet form factor. The IdeaPad Yoga 11 is a downsized version of the Yoga 13, shrunk to an 11.6-inch form factor and running on NVIDIA's 1.3GHz Tegra 3 processor with a Windows RT OS, 2GB RAM and 64GB SSD storage. Screen resolution has also dropped from 1600 x 900 to 1366 x 768 pixels. The Lenovo Yoga 11 is currently retailing for S$1199. 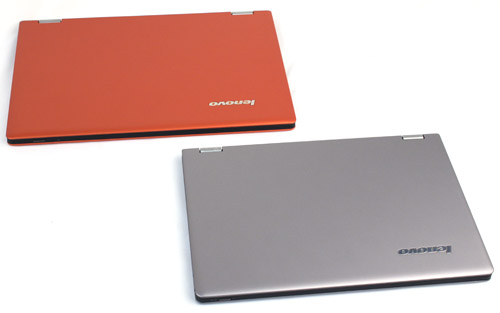 The Yoga 11 sounds like a great idea: smaller, lighter, more portable, 11.6-inch form factor which, in theory, should make its tablet mode more usable and accessible to those accustomed to 10-inch tablets, all while retaining the useful ability to convert to a notebook for productivity needs when required. Or as Lenovo puts it, "you have a system that combines the convenience and portability of a tablet with the capabilities of a laptop." Sounds promising, right? Does it deliver? Let's find out.

Similarities to the Yoga 13

Design-wise, the Yoga 11 does everything its larger sibling can do, including transforming into four different user modes: 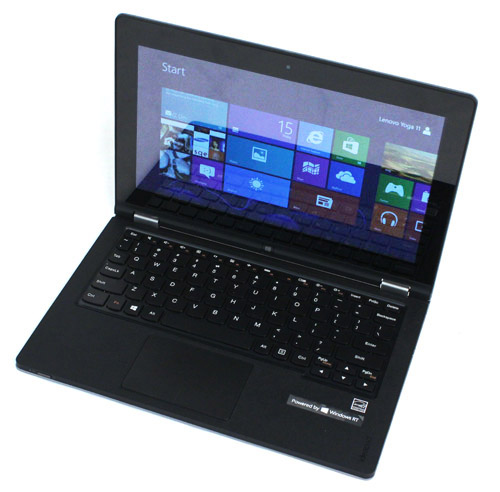 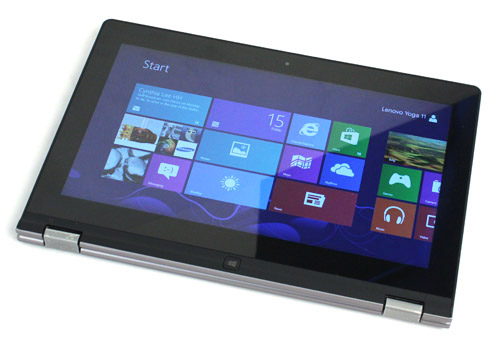 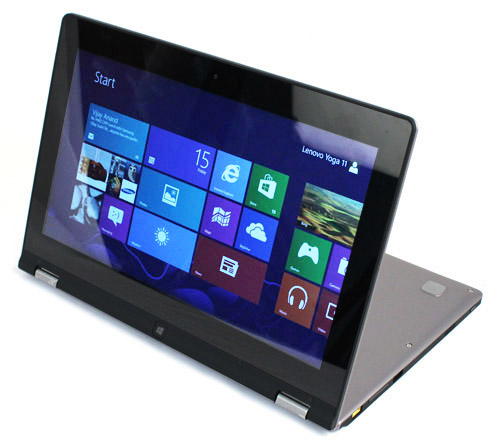 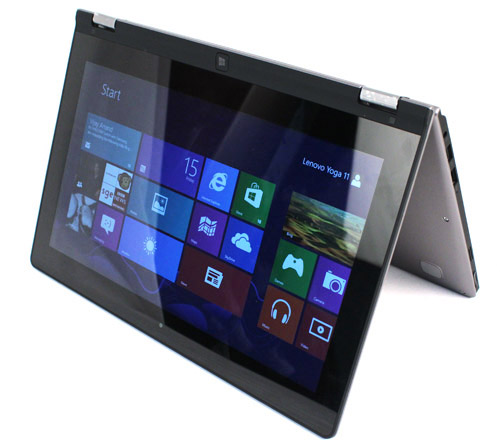 Like the Yoga 13, the keyboard and trackpad are both disabled when the screen is opened more than 180 degrees. This is in anticipation that you would be converting the Yoga 11 to conform to one of the non-notebook usage modes shown above.

Overall build quality remains extremely solid, with little to no flex evident, despite the almost entirely plastic build. The exterior uses the same scratch-resistant coating and the interior keeps the same pseudo-luxurious, soft and grippy faux-leather finish found on the Yoga 13. 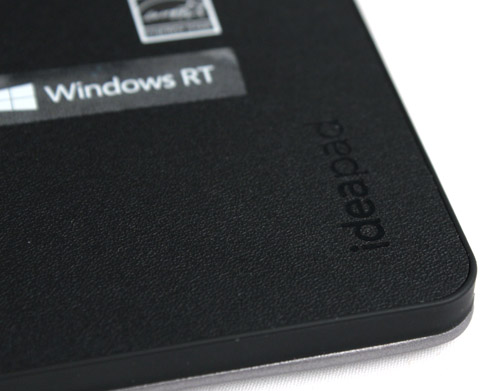 Most importantly, the hinges feel very stable and secure, which lends credence to Lenovo's claim that the 360 hinge can withstand over 25,000 high-pressure open/close movements. 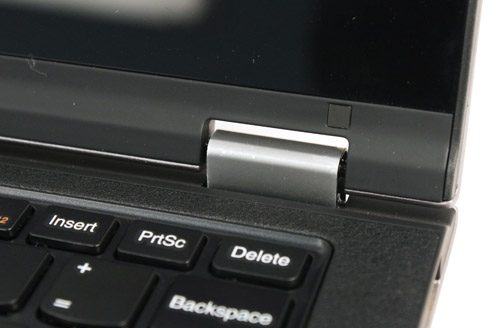 We were also impressed with the Yoga 11's keyboard, which uses the same Accutype chiclet keys as the Yoga 13. The keys have a pleasing resistance, and a fair bit of travel, making for a comfortable typing experience, which is especially impressive considering the Yoga 11's small size. In fact, next to Apple's 11-inch MacBook Air, the Yoga 11 probably has one of the best keyboards we've seen on an 11-inch device. Both the trackpad and touchscreen were also responsive, with no noticeable issues. 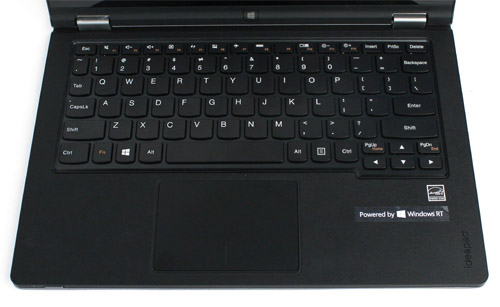 More Portable? Yes, But Compared To What?

At 1.27kg, the Yoga 11 weighs in only about 300g lighter than the Yoga 13, which isn't a huge reduction in weight, but yet it's noticeably lighter. It's also about 1.3mm thinner, which on the other hand, isn't really a big enough reduction to notice.

Holding the Yoga 11 in tablet mode, it still feels quite heavy, despite the weight reduction - and when you compare it to other more conventional tablet form factors such as Microsoft's Surface, it becomes apparent why.

The Surface weighs just 680g, which makes the Yoga 11, at nearly twice the weight, feel downright obese by comparison. Seeing as the keyboard portion of the Yoga 11 is non-functional in tablet mode, we found ourselves wishing that it could be removed to shed some of that excess weight and bulk, similar to a docking hybrid PC such as Samsung's ATIV PC or ASUS' VivoTab RT. Unfortunately, that's not possible so, despite the smaller, more tablet-like size, we still found the Yoga 11 to be too bulky and heavy to be comfortably used as a tablet for any length of time. No matter what Lenovo claims, the Yoga 11 still feels like a notebook first and foremost, with the tablet mode available as a secondary option.

With the reduction in size, the Yoga 11 has also suffered a loss in screen resolution, dropping from 1600 x 900 pixels to 1366 x 768 pixels. The Windows 8 Modern UI actually looks rather good on 1366 x 768 so this is not a huge concern (and you won't be using the desktop environment anyway, for reasons we explain below), however, a higher resolution screen would have been very welcome (especially considering that we've seen full HD displays on 11-inch machines before). The display itself is fairly bright, and viewing angles were decent.

Audio was quite weak, even at 100% volume. If you're planning on watching any videos with the Yoga 11, you'll definitely want to connect a good pair of earphones or even mobile speaker units.

Connectivity is very average, with the Yoga 11 losing the Yoga 13's USB 3.0 port, using instead two USB 2.0 ports, a combo headphone/microphone port, a multi-card reader and an HDMI port.

The biggest difference between the Yoga 11 and 13 comes with the downgrade from an Intel Core i5 or i7 processor to NVIDIA's 1.3GHz Tegra 3 processor, the same processor found on tablets such as Microsoft's Surface and ASUS' Transformer Pad Prime, as well as smartphones like HTC's One X and LG's Optimus 4X HD. This alone is a fairly big drop in processing power, but its a problem compounded by Tegra 3 being unable to run a full version of Windows 8, using Windows RT instead.

If you're not familiar with the differences between the two (you can find out everything you need to know in our Windows 8 Mega Guide), the most pertinent change is that Windows RT will only run Windows 8 apps, which means you can't install any traditional Windows-based applications on the Yoga 11. While this may make sense for a device aimed primarily at content consumption like a tablet, it's obviously a major drawback for any notebook-like product. 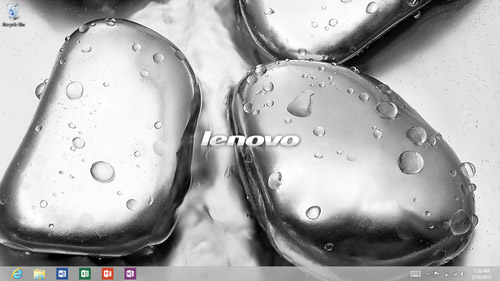 At the time of writing, the Windows 8 App store is still quite limited when compared to Android's Google Play store and iOS' iTunes App Store. Fortunately, the Yoga 11 comes with a few decent apps pre-installed, most notably MS Office 2013 RT, complete with MS Word, Excel and PowerPoint (but not Outlook, instead you'll have to make do with the built-in email app). Of course, these apps don't offer the same level of functionality as the full desktop versions, but they are enough to lend you an edge in productivity against Android or iOS based tablets. The Yoga 11's excellent keyboard also goes hand-in-hand to ensure basic productivity doesn't get hampered. 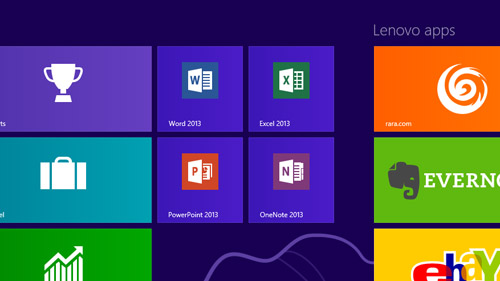 Advantages of a Tegra 3 Processor in a Notebook Form Factor

The one big advantage the Yoga 11 may hold over other Tegra-based tablets or Intel-based notebooks is when it comes to battery life. While the Yoga 11 may use a tablet processor, but its notebook form factor lets it retain a notebook-sized 4-cell battery, which should give it plenty of juice in the tank. Lenovo rates the battery on the Yoga 11 at 13 hours, five more hours than their rating for the Yoga 13. If it can live up to this lofty estimation, battery life alone could be its saving virtue for road warriors looking for something that will just keep going and going.

The Yoga 11 should also benefit from Windows RT's unique 'Connected Standby' feature, which instead of a traditional 'sleep' or 'hibernate' power state used by most notebooks, uses a super efficient power state that supposedly allows the system to achieve weeks of standby battery life, all while still receiving data updates. Like a traditional 'sleep' mode, the system immediately resumes without any waiting. Connected Standby mode is activated by pressing the power button, or just by leaving the machine alone for a while.

Write a Review
Compare This | Specifications
Excellent build quality
Easy notebook to tablet conversion
Great keyboard
Superb battery life
Too bulky and heavy to be used as a tablet
Restricted Windows RT and limited apps
No USB 3.0 ports
Average screen resolution
Too expensive
Appeals only to a niche user group
Our articles may contain affiliate links. If you buy through these links, we may earn a small commission.
Sponsored Links