Note: This article was first published on 16th September 2019 and updated to include a new colourway and price point in the conclusion. 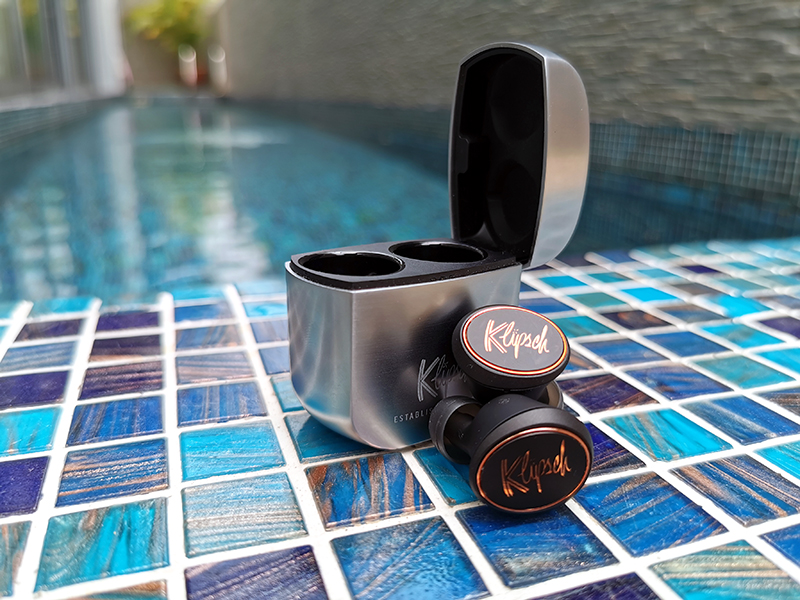 True wireless earphones have come a long way from crowdfunding hype to a mature audio category with no shortage of big-name contenders. We’ve done reviews of several noteworthy pairs, including a recent shootout between Plantronics, RHA, and Sony.

Klipsch introduced their entrant, the T5 True Wireless, into the increasingly crowded field earlier this year at CES, which subsequently landed in Singapore back in June.

The iconic audio brand’s take on the true wireless form factor immediately made a positive impression with its stunning Zippo-inspired design clad in metal and packing a premium feel.

It may look great, but does it sound great? And how does it hold up over daily use?

We spent several weeks with a unit of the T5 True Wireless to find out.

The T5 True Wireless has without a doubt the most striking design out of all its competition at the time of writing.

The metallic case with its brushed metal finish and its satisfying heft give the gadget a decidedly premium build. It feels cool to the touch in sweltering hot Singapore, and the act of flipping it open and close with one hand is extremely gratifying. 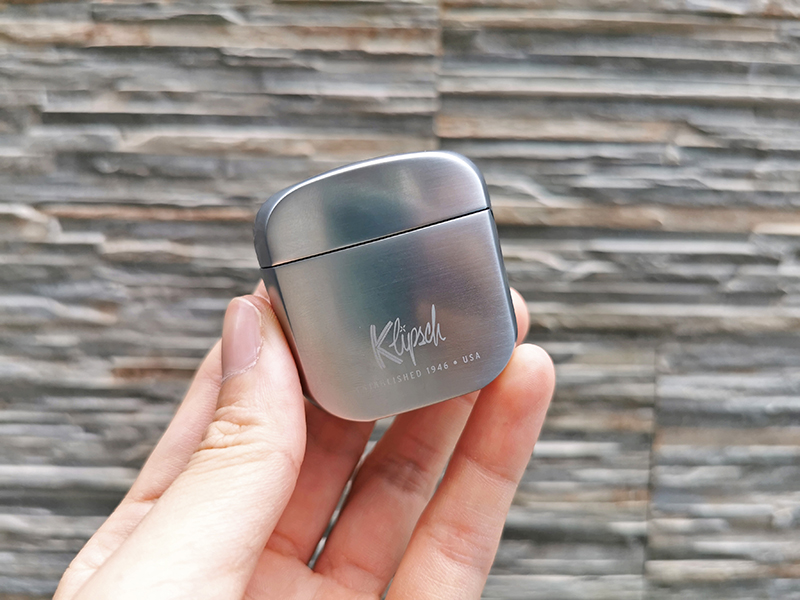 It is a case made for fiddling and fidgeting, which means you should expect to see some dings and scratches develop over time. Depending on your point of view, this will either make the T5 True Wireless an attractive accessory that ages with you over time or cause you to treat it with more care.

On the front of the case are three small LED lights that indicate remaining juice left in the case. They light up when the earbuds are placed back into the case and when you plug in the USB-C charging cable around the back, but there is, unfortunately, no other way to manually check on battery life.

I would also have liked a wireless charging option so that it’s easier to keep the case juiced up without much extra effort. As it stands, the T5 True Wireless will join your expanding family of electronic devices that you need to remember to physically plug in to charge regularly.

The pair of earbuds that lie inside is no less attractive than the case. They’re slightly propped up on one end for easy retrieval and feature a stylised wordmark that seems fits right in with the retro aesthetic. 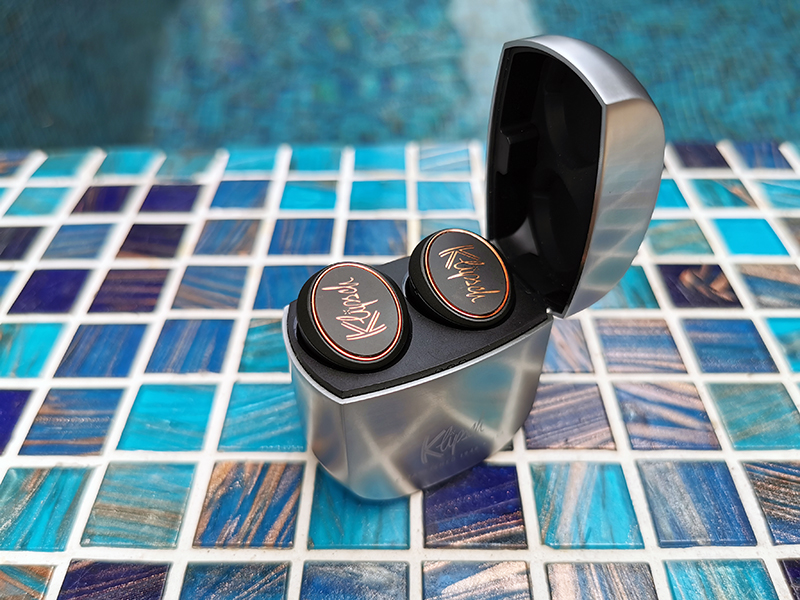 The T5 pair is also sweat and water-resistant with an IPX4 rating, so it should be able to withstand whatever our equatorial climate throws at it. Just don’t take it swimming.

Pull them out and you’ll marvel at yet another engineering achievement: the earbuds are surprisingly light. They slip in and out easily of the case and felt comfortably weightless in my ears.

Although Klipsch talked up its patented oval ear cushions, they felt effectively no different from other silicon earbuds I’ve tried. In fact, they managed to fall out of my ears several times when I shook my head too vigorously during a workout.

To be fair, this is a problem inherent to the form factor and plagues most true wireless earbuds. It’s a pity Klipsch didn’t include a set of ear fins to secure it for more intense activities. 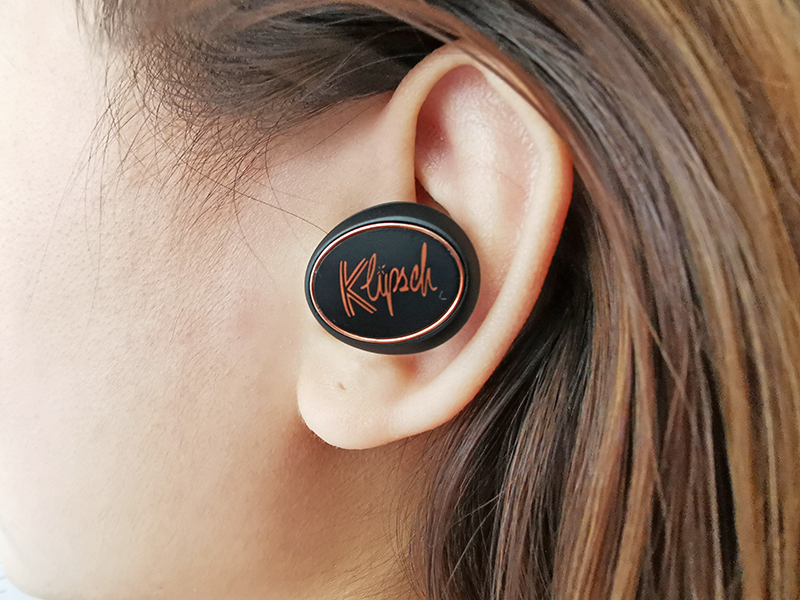 As is typical, the T5 True Wireless is ready to pair the moment you take them out for the first time. Both the left and the right earbud can be paired as the “master”, and they both appear in the list of Bluetooth devices in your phone’s Settings menu. You just have to select one side to pair, and they should both connect just fine the next time you pick them out of the case.

Klipsch says they’ll be launching a mobile app soon to make the process smoother for users new to the true wireless form factor. I’m told the app will also include functionality that eases pairing and connecting to multiple devices.

Above all, the star of the show for this reviewer is definitely the battery life. No other true wireless earbuds to date have been able to give me the peace of mind that they’ll still be fully charged up and ready to go once I take them out of my bag.

The T5 True Wireless was still chugging along fine after more than a week of normal usage. This usually means a couple of hours on my daily commutes. At the end of a typical week, the indicator lights on my case still showed two out of three bars remaining, which bodes very well for its overall longevity. 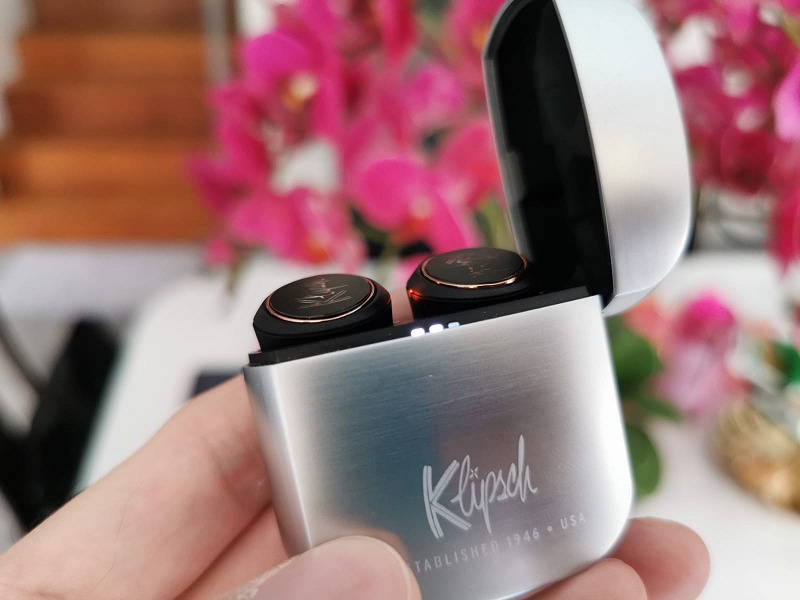 The T5 True Wireless produces sound that comes through as balanced and detailed with very clear vocals, no matter if I’m listening to a jazzy orchestral piece like Another Day of Sun from the movie La La Land or an adrenaline-pumping rock band like Yellowcard.

In addition to acoustic music, its clarity in the mid-range also makes it superb for classical music. I found myself completely immersed in the tinkling of Bach’s Well-Tempered Clavier and the precise finger-work of Paganini’s soaring violin solos despite the dull roaring of the MRT train in the background.

The bass is, in a word, sufficient. It’s powerful enough to add punch to the songs that need them, but never too overpowering that they turned me off.

The soundstage is surprisingly detailed in a pair of earphones so small. The T5 True Wireless’ soundstage is noticeably wide and deep, and I could roughly identify where various instruments and vocals were coming from.

But at the end of the day, you don’t buy true wireless earphones just for the sound quality. If that is important to you, you’d be better off looking at a pair of wired in-ear or over-ear cans that are much suited for this purpose.

Call quality, on the other hand, is nothing to write home about.

Out of the handful of times that I’ve had to take calls using the unit, the quality was “good enough” only on about half of those calls. The rest of the time, I resorted to switching back to handheld mode just to cut down on the frustration.

Simply put, I would position these as mainly recreational earphones, and wouldn’t rely on them for critical conversations, business or otherwise. 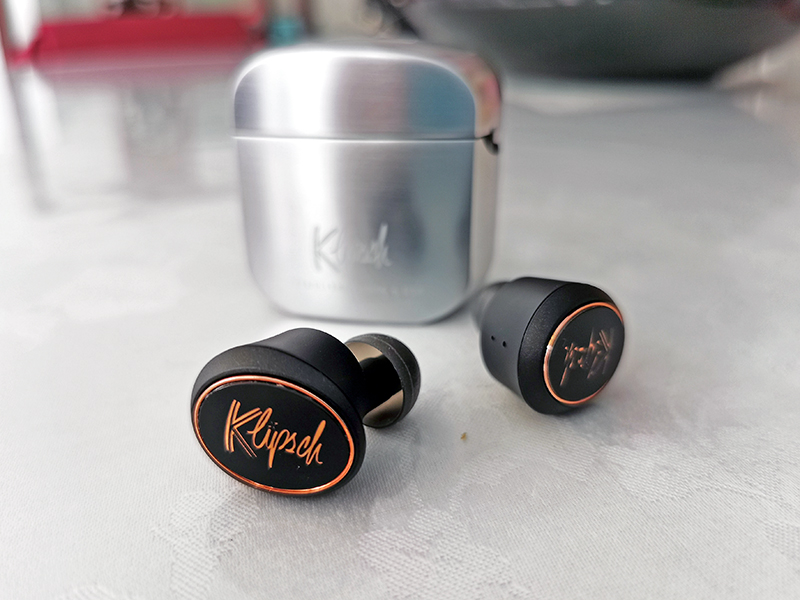 With the T5 True Wireless, Klipsch has on its hands a very compelling contender that offers superb performance at a relatively sane price point. At a recommended retail price of S$349 (also available on their official LazMall store and via their official dealer on Shopee ), it’s a good S$150 cheaper than the Sennheiser Momentum True Wireless and offers a comparable level of sound quality and performance.

On the design front, there’s simply no contest. No other true wireless earphones look and feel as good as the Klipsch T5 True Wireless. In the weeks I've hopped around town with the unit, the shiny metal case never fails to draw attention from passers-by and serve as a great conversation starter with friends and acquaintances.

Combined with amazing battery life and a comfortable fit, water resistance, few other true wireless models on the market can match up to what Klipsch brings to the table.

Updated on 20th November 2019 - Klipsch has a new colourway option in Singapore for the Klipsch T5 True Wireless called "Triple Black".  Essentially a glossy black finish, it is priced the same as the original model at S$349 if you prefer a more nondescript colour to avoid attention and will soon be available.

Write a Review
Compare This | Specifications
Outstanding battery life.
Great sound quality.
Attractive and unique charging case.
Sweat and water resistance
Case might be too heavy and bulky for smaller hands.
Fit is less secure without ear fins
No wireless charging option
Missing app control
Our articles may contain affiliate links. If you buy through these links, we may earn a small commission.