Kena: Bridge of Spirits fails to take risks but at least it's cute

Kena: Bridge of Spirits fails to take risks but at least it's cute 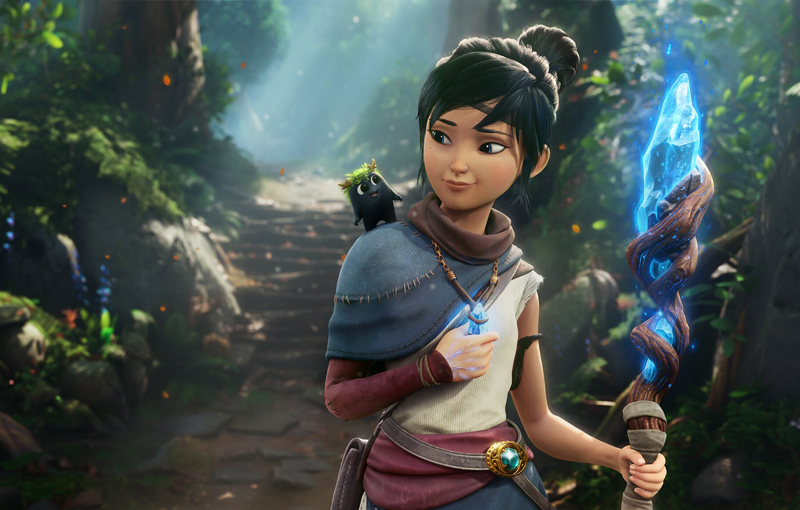 Kena: Bridge of Spirits had an impressive debut for an indie platformer, dazzling us with its Pixar-like animation and adorable visuals - and by adorable visuals, I am specifically referring to the little monsters that follow Kena around like little Pikmin. This is developer Ember Lab’s very first game, as the studio only worked on commercials and short films before switching over to game development.

That makes this game a stunning achievement no matter which way you look at it, but it also explains many of its flaws. For example, an emphasis on visuals over gameplay that makes it look stunning on PlayStation 5 felt like it was made for the PlayStation 2. I know that’s a hot take, but let me explain.

Put on the mask Kena: Bridge of spirits has you play as the titular Kena, a spirit guide in a fantastical world where the dead need a little nudging to pass from this world into the next. It’s no exaggeration to say Kena’s story is all about death - but that doesn’t mean it’s dredged in tragedy all the time. When we meet the young spirit guide, her world has begun to be corrupted by hostile forces she struggles to understand. Everywhere she goes, she finds mostly empty villages that are either occupied by ghosts in need of assistance or creatures in need of…more painful assistance (read: a good whack on the head).

This corruption spreads around an abandoned village, turning its lush foliage into red poison that doesn’t just hurt Kena, but summons hostile spirits that attack her at first sight. Kena’s mission is easy to follow: stop the corruption from spreading, and restore her world to the lush beauty that has been stolen from it. This isn’t exactly a novel premise - hordes of games big and small come out set in desolate worlds where nature is slowly being destroyed by mysterious forces that always seem to come in varying shades of red. The Pathless and Horizon Forbidden West fit this template just recently, for example. Kena doesn’t do much to stand out from the pack. This quest takes Kena to the aforementioned abandoned village and the forest area around it, all of which are connected - which I actually quite liked. You don’t run into many loading screens, and you grow more and more familiar with this world the further you explore it. Oftentimes, you’ll run into gates and doors blocking your progress, only to come back later on in the story with the tools to open them. Besides this little Metroidvania-esque touch, Kena’s strongest point in exploration are the little collectibles scattered around the map. You’ll find spiritual ‘mailboxes’ wherein Kena can deposit random Spirit Mail she finds out in the wild to free trapped spirits and get access to locked-away areas. Those are fun to find, and they make this world feel a little less empty.

And I can’t forget the game’s strongest point by far: the Rot. The Rot is a bit of a misnomer, because it comes in the form of hopelessly adorable little furry creatures who follow Kena about and actually help her put a stop to the red corruption. The amount of Rot you have depends on how much time you take to explore, because they’re often hidden away under rocks or in walls for you to find. Finding Rot helps you unlock new ability slots Kena can use in combat, but they’re also really cute and they wear cute little hats, and I love them. The game even lets you sit down and take a breather to interact with the creatures. Just fantastic stuff.

Hit them with a big stick 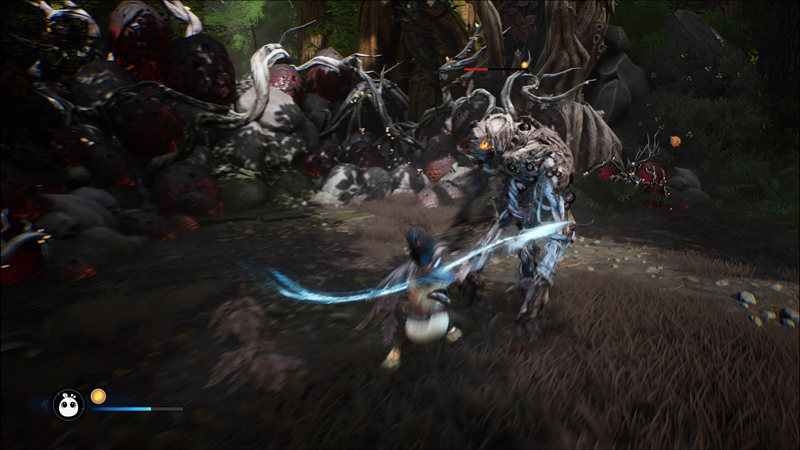 You’re going to do a lot of fighting in Kena: Bridge of Spirits, so let’s talk about its combat. During exploration, you will often run into small red arenas corrupted by plants that resemble big red bulbs. You have to destroy these bulbs to clear up sections of the arena, but they’ll spawn armies of enemies to kill you first. Combat is a very familiar mix of light and heavy attacks, which you can execute in increasingly more complicated combos the more your abilities are leveled up. Other than bashing in enemy skulls, you can also summon a blue spirit shield to either block or parry attacks, or roll around to dodge attacks.

This feels…fine. There is a monotone place between excellence and mediocrity, and Kena’s combat lives there snugly. Arenas throw waves of enemies at you, and parrying feels imprecise enough to rely on just dodging attacks and still getting through most encounters safely. Enemy patterns are predictable and repetitive, so all you have to do is remember how many attacks one can take before they hit you back, and dodge before they do. Then you repeat. To its credit, these encounters occasionally turned up their difficulty beyond my expectations, and that challenge was enough to keep me engaged during tougher boss fights. 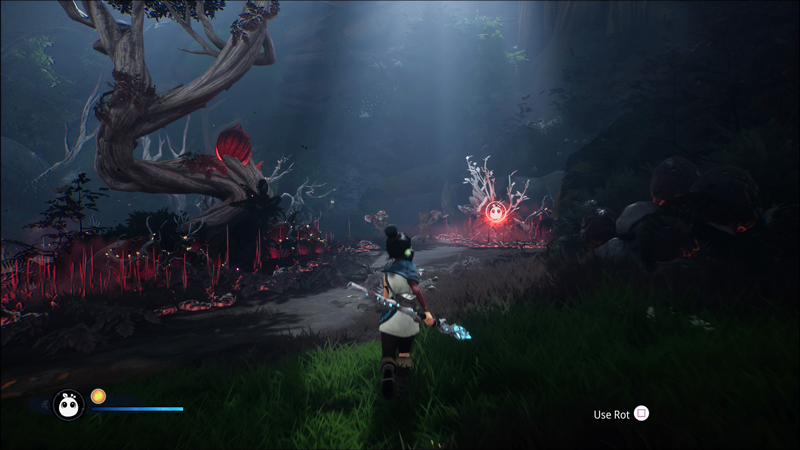 None of this feels fresh or particularly well-executed, however - besides the Rot. Kena can call on the Rot based on a courage meter, allowing her to use special abilities like healing herself or summoning a powerful hammer. They can even paralyse enemies temporarily, which is surprisingly handy when tougher battles get overwhelming. The moments in which Kena makes you feel like you’re fusing your abilities with the spirits’ to get through a challenge are where the game shines. You are a spirit guide after all, so working in sync with nature and supernatural forces to beat back the corruption just feels right.

This only happens later in the game however, as you start off with bare-bones abilities and few Rot creatures to help you out. As far as its combat and traversal go, Kena feels oddly reminiscent of early PlayStation 2 platformers, more like a Knack than an Ori and the Blind Forest. Its mechanics feel either outdated or generic, but with a remarkably pretty coat of paint splashed over it. Platforming isn’t especially exciting given that you have to do so much of it too - it’s just a lot of ledge-shimmying, double-jumping and hopping up ledges. For a supernatural story set in a fantastical world, it just feels so basic, and that sentiment extends to the rest of the game as well. Kena: Bridge of Spirit thrives on eye candy. From the cuteness factor of your little Rot companions to the pretty, if inconsistent, visuals of its scenic environments and well-animated cutscenes, there’s a lot to like here. That greatness feels at odds with its gameplay however, which goes too far in the direction of safety that it feels bland and overdone. Kena’s story does not help much in this aspect, as its focus on dark themes like death and tragedy are not explored very meaningfully, nor are its characters memorable, nor are the cast’s performances all that great.

As it stands, this is a great debut for Ember Labs, but one can only hope the studio carves out a different and more interesting path for Kena moving forward.

Write a Review
Compare This | Specifications
Great animations and visuals
Adorable creatures
Lots of optional collectibles (including the Rot)
Bland story
Forgettable characters
Underbaked combat and platforming
Our articles may contain affiliate links. If you buy through these links, we may earn a small commission.
Sponsored Links