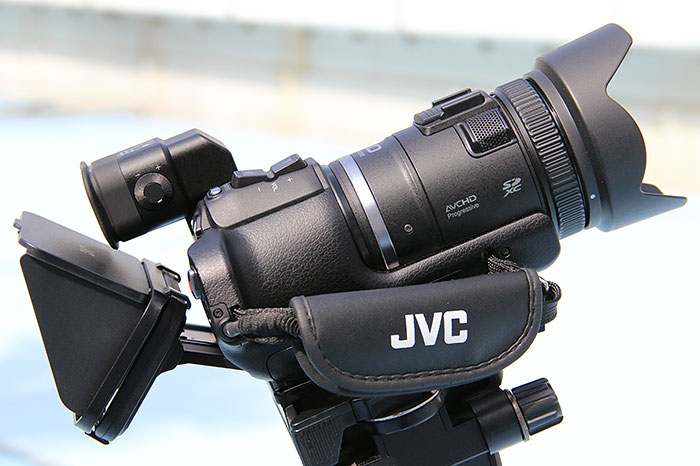 Shooting in the Fast Lane

A non-conventional-looking camcorder (you’ll see why in a moment), the Procision GC-PX100B is JVC’s current flagship HD memory camcorder. On paper at least, it has a specs list that will have most video enthusiasts nodding their heads, such as 1080/50p recording, a maximum bitrate of 36Mbps, a fast and optically stabilized F1.2 lens, 10x optical zoom, the ability to capture 20-megapixel still photos, and a 3-inch tilting touch panel. That said, it’s also fair to point out that such high-end specs aren’t exclusive to the PX100B; most flagship camcorders from the likes of Canon, Panasonic, and Sony have them too. This is why in most of the PX100B’s marketing collaterals (this website is one example), we often found a huge chunk dedicated to highlighting what’s arguably the camcorder’s trump card over it rivals: high-speed shooting. And just how fast are we talking about here? How does 500fps sound? And to make this truly useful, JVC (whose parent company is JVC Kenwood, by the way) has designed a few nifty functions around it, like an easily accessible Time Control function (again, more on that later).

As far as consumer camcorders go, the innards of the GC-PX100B are as good as they get. It uses a 1/2.3-inch, 12.8-megapixel CMOS sensor (back-illuminated, of course), and as we pointed out earlier, a JVC HD GT-branded 10x optical zoom lens, which starts at a decent 29.5mm at the widest end. You can zoom up to 19x using Dynamic Zoom, but at a lower (but still HD) 720p resolution. For those interested, the GC-PX100B is powered by JVC’s Falconbrid Engine, first unveiled a couple of years ago. This single-chip image processor is what makes shooting at 1920 x 1080 at 50p with 36Mbps processing possible.

Of course, the aforementioned specs aren’t for every power user. Those who need a longer zoom lens can stop reading (though we very much prefer that you continue) and check out Canon’s Legria HF G30 that has a 20x optical zoom; and those who need a wider lens or a built-in projector in their camcorder can take a look at Sony’s Handycam HDR-PJ790VE. 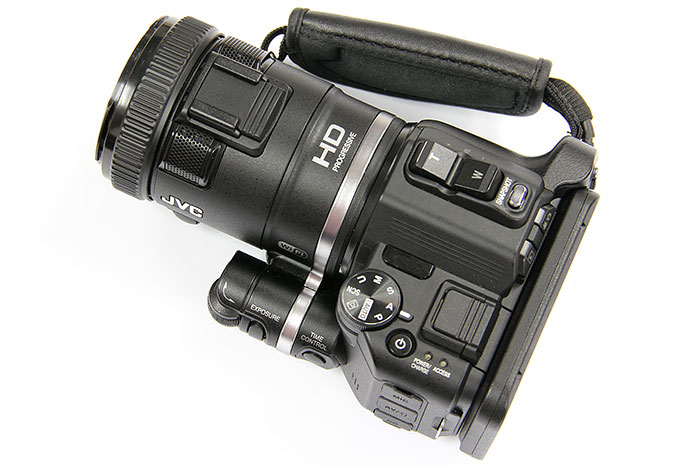 A Fuse Between a Camcorder & a Digicam

Specs aside, perhaps the biggest talking point of the GC-PX100B is its looks. For those who remember, JVC not so long ago had a GC-PX10 under the Everio brand. Marketed as a do-it-all hybrid camera, it has a super-slim compact camera-like body that turned comical no thanks to its giant lens. The PX10 also touted its 36Mbps 1080/50p recording capability and 250fps high-speed video recording feature - so in more ways than one, the PX100B can be seen as its successor (spiritually, at least). However, it looks like JVC has learnt its lesson, for the PX100B’s shape is now a better blend between a traditional camcorder and a prosumer digital camera. In fact, from a top-down view, it looks like half of a digicam being fused into the left side of a barrel-style camcorder.

Unlike a typical camcorder (which is to say, like a typical digital camera), the PX100B’s rear is dominated by the 3-inch, 460K-pixel touch LCD. While you can tilt it, you can’t flip it out and swivel it away from the camcorder, which is a pity, as a fully articulated screen will make it even easier to capture videos and photos at more difficult and interesting angles. But credit where credit’s due: JVC has thoughtfully bundled a folding hood with the camcorder, which greatly helps to reduce glare when you’re shooting under the sun. An electronic viewfinder (EVF) isn’t built in; but JVC has an EVF attachment that slides into the hotshoe at the top left of the camcorder. There’s another hotshoe right above the lens, and it’s where you attach an external stereo microphone or a video light. 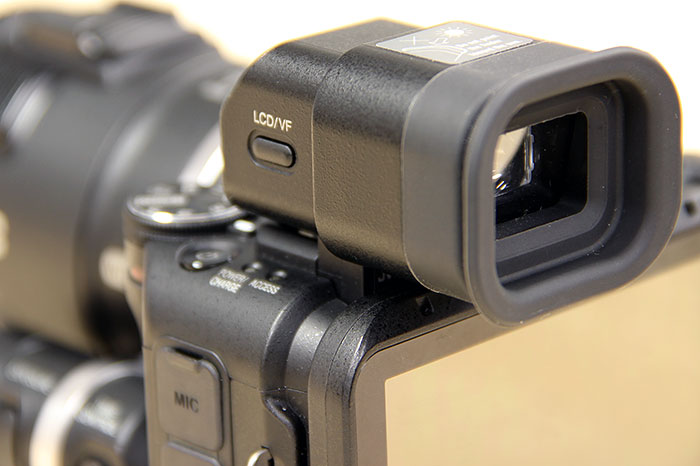 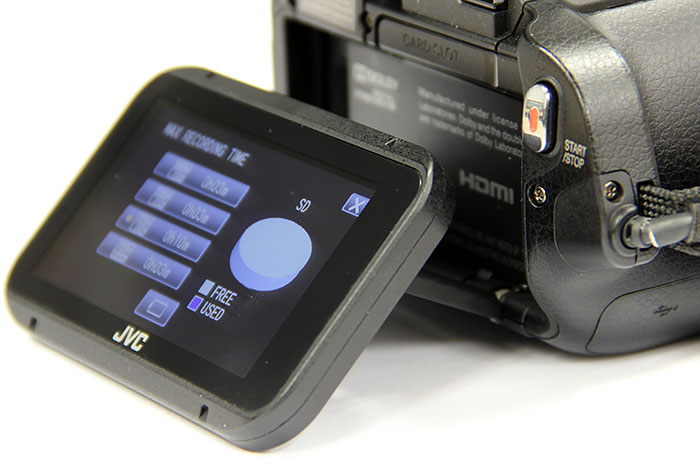 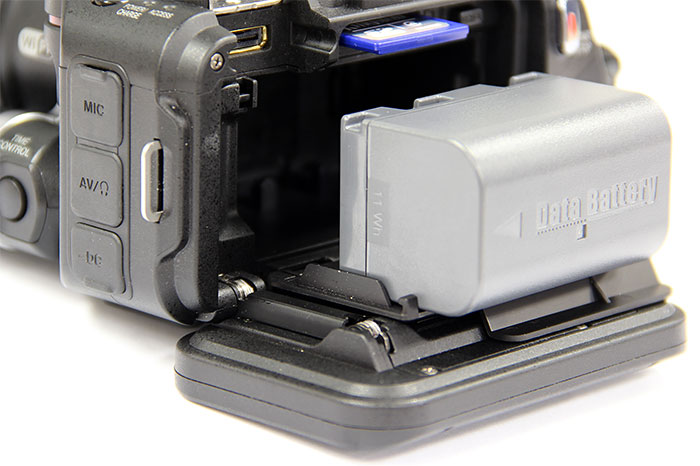 So, with the LCD now ‘relocated’ to the rear, what’s on the left side of the PX100B? Besides the hotshoe, the bulge here is home to the mode dial and power button. The zoom rocker and a Snapshot button are sensibly located at the center, as are the playback and video/photo buttons, and the Start/Stop button is found further towards the right. All these mean that the most frequently used controls can be easily reached by your right thumb and index finger. Unlike the PX10, you don’t grip the PX100B like you do with a digital camera; the barrel styling means you grip it like you do with a traditional camcorder, complete with a strap round the back of your palm.

Other than the USB and HDMI ports that are situated on the right, the other ports (microphone, AV/headphone, DC input) are located on the left of the camcorder. On the same side but more towards the mid-section you’ll notice several more controls. Pressing the Time Control button brings up a menu that lets you select frame rates for high-speed and time-lapse shooting; in photo mode, here’s where you select continuous shooting speed. Selection is done using a dial at the front, and you confirm a selection by pressing the Set button right beside it. And then there’s another Exposure button, which lets you tweak exposure compensation, shutter speed, and aperture depending on the mode you’re in. While it sounds like the PX100B has a bit of a button overdose, after using it for a while, we actually quite like the arrangement. If you’re an advanced user, be prepared to have both your hands occupied: your right hand gripping the camcorder and controlling the usual zoom and record controls, while your left hand is busy with the dials and buttons that deal with the various shooting parameters, not to mention navigating the touchscreen and turning the front lens ring to adjust focus if you've engaged Manual Focus mode. 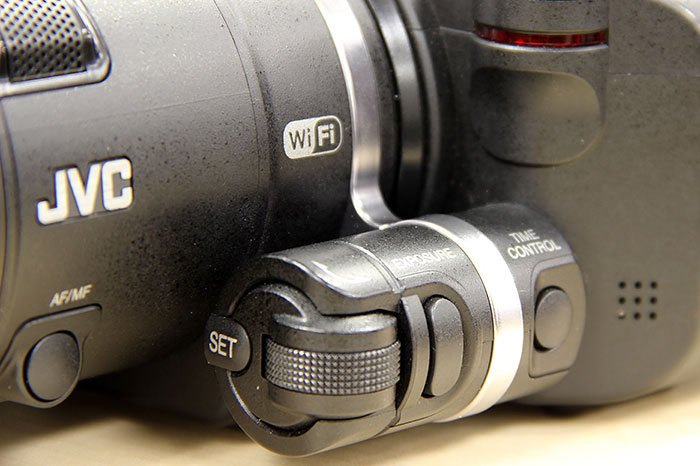 And speaking of the touchscreen, it’s resistive instead of capacitive. But thank goodness, the resistance is fairly slight; in other words, there’s no need to poke the with your fingernail with a lot of force for it to register. Like most menu systems found in other big-brand camcorders, the PX100B’s is nothing to shout about. To bring up the main menu, you’ve to tap the onscreen Menu button, since there’s no dedicated hardware button. All the settings are grouped under six sub-menus: Wi-Fi, Record Settings, Special Recording, Setup, Connection Settings, and Media Settings. And within each sub-menu, you find more settings buried within more sub-menus. Also, menu icons which use a picture are arranged from left to right, which means to get to the last one, you scroll towards the right. But those that use text labels are arranged from top to bottom, which means you scroll downwards.

But the most frustrating aspect of the menu design isn’t any of the above; rather, it’s the fact that the default behavior of the PX100B when you confirm a setting is to drop you back to the main live view screen. So if you've more than a few settings you want to change, be prepared to do a lot of tapping. And we just can't fathom why some menus have a back button that returns you to the previous page, but some don't. 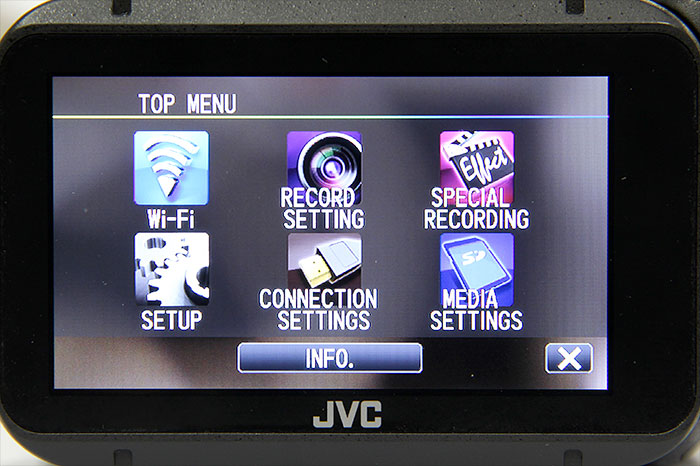 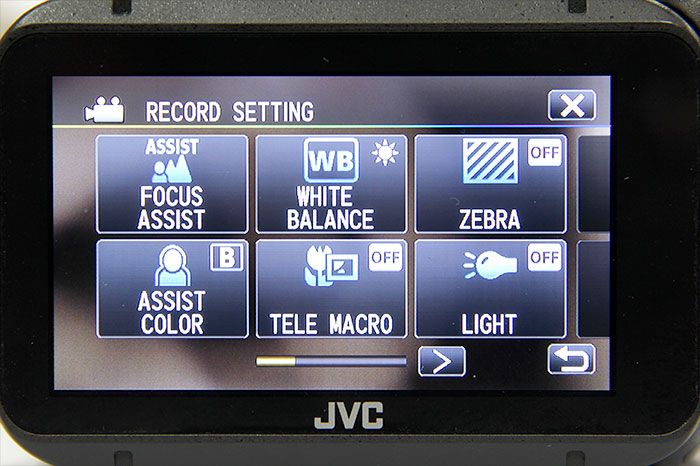 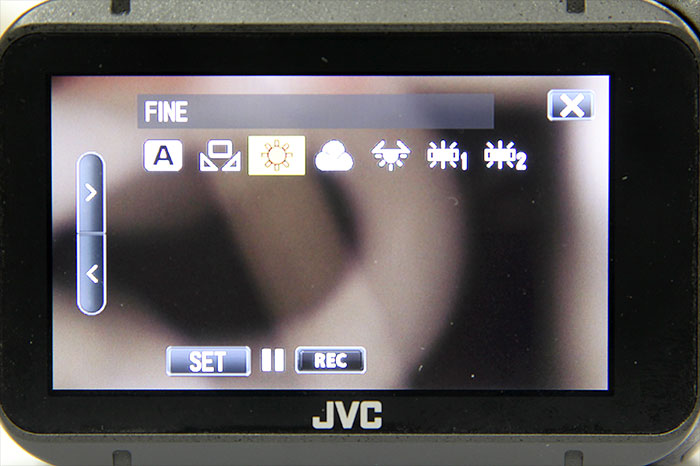