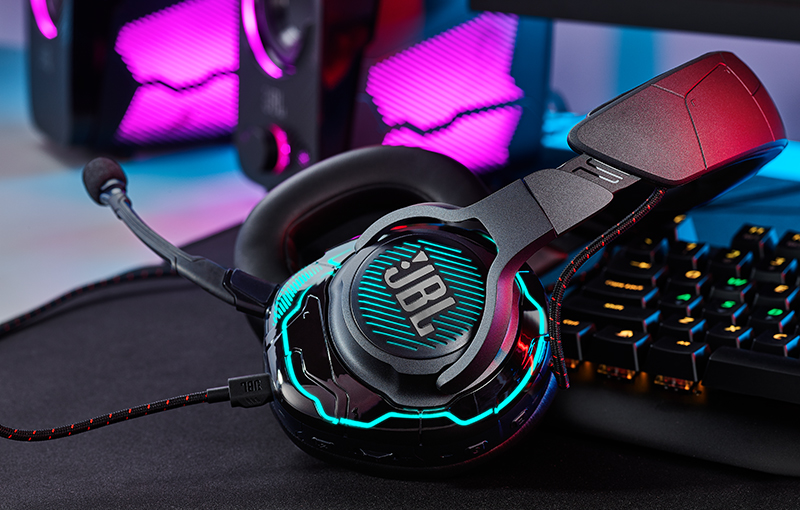 JBL is no stranger to the world of high-end audio, but it's a relative newcomer to the gaming headset space. The Quantum One is its flagship gaming headset, and it attempts to bring together JBL's audio pedigree with the things gamer's prize, such as Hi-Res audio certification and accurate positional audio in-game.

But this isn't any ordinary claim to better positional audio. The Quantum One has something JBL refers to as QuantumSPHERE 360 (more on this later), which is basically integrated head-tracking that creates an independent virtual soundscape that sounds different according to how you position your head.

And as its stiff S$369 price tag suggests, the Quantum One packs that and more into its frame, including elaborate RGB lighting on the earcups. This isn't a headset for someone who wants a more minimalist look, and the headset sports a rather elaborate design, from the winding circuit-style path the LED lights trace around the ear cups to the orange-and-black cable. I personally prefer headsets with a simpler design in the style of the Razer BlackShark V2 or Logitech G Pro X Wireless, but the JBL Quantum One will suit those who enjoy a more traditional, gamer-esque look. 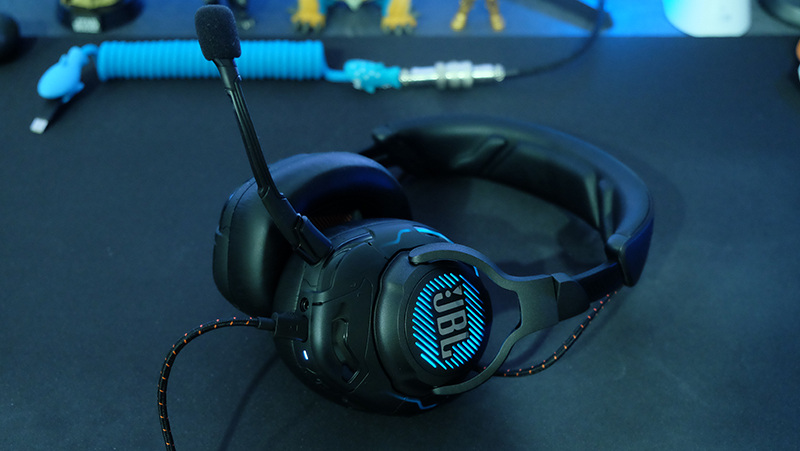 At 369g, this isn't the lightest headset around, but its plush, memory foam earcups and padded headband help with comfort over long hours. The Quantum One proved to be fairly comfortable, even with glasses on, but the headband doesn't feel as good as the cushier memory foam headband on the Razer Blackshark V2. The large leatherette earcups cup your ears, instead of sitting on them, although a fabric material would have been more breathable. You'll also want to watch out for peeling on the synthetic leather, so it'd have been nice if JBL had included swappable fabric ear cups as Logitech did on the G Pro X Wireless. 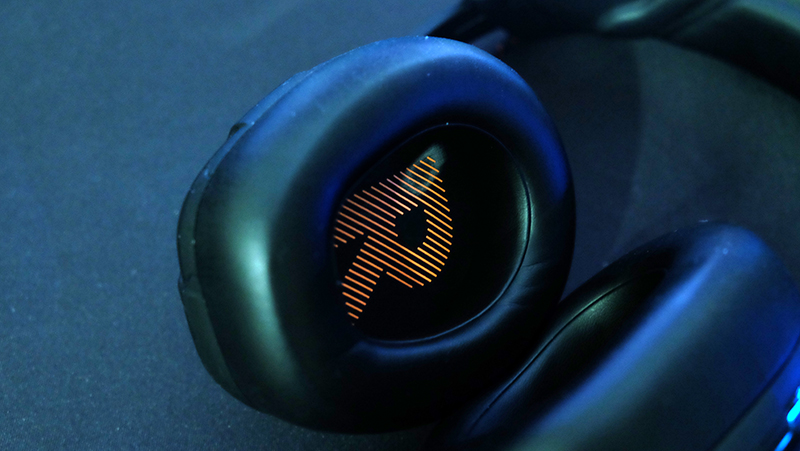 Build quality is good, and the earcups can rotate flat for easier packing and transport. There are helpful notches on the sliders so you can set the precise position for each earcup, but I've liked to see a more sturdy metal mechanism on a headset at this price. 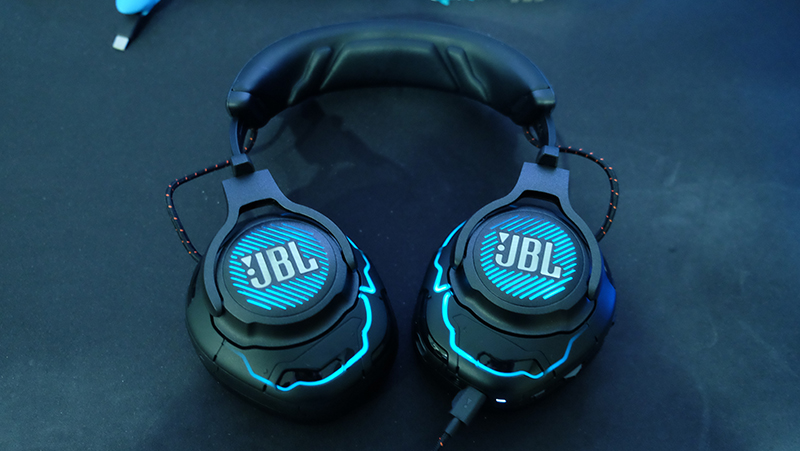 Elsewhere, left and right earcup indicators have been slapped onto the insides of each earcup in bright orange, which saves you a lot of time in looking for obscure labels on the exterior.

I mentioned earlier that the Quantum One is a very elaborate headset. By that, I also mean that it's quite complicated. The left earcup is dotted with a bunch of buttons, connectors, and the volume wheel, which can appear a little intimidating for a new user. You'll want to keep the user manual close when getting acquainted with the headset. Fortunately, the layout of all the controls doesn't take too long to learn – there are dedicated buttons for toggling the active noise cancellation (ANC) feature on or off, a button to recenter the head tracking, and a third for muting the microphone. The end of the boom mic displays a red LED when it's muted, so you know when your mates can't hear you. 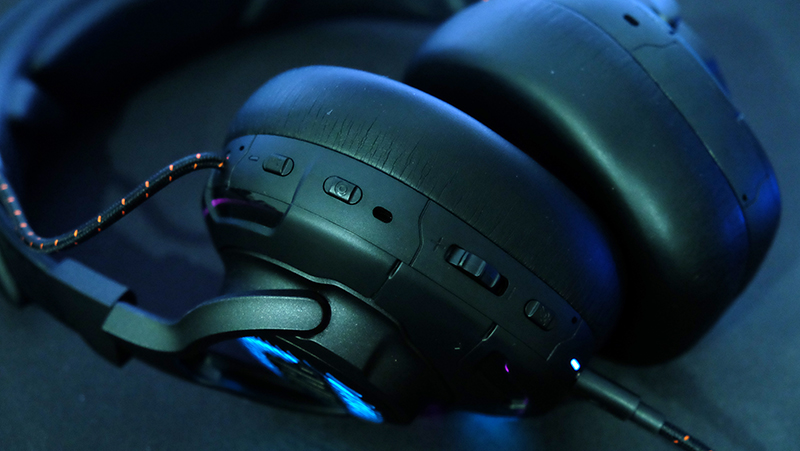 The detachable USB-C cord comes with a compact mixer dial, which lets you adjust the audio balance between chat and your game. It has a rubberised bottom to help it stay in place, but because the dial is rather light, it's still relatively easy to displace it when tugging on the cord. 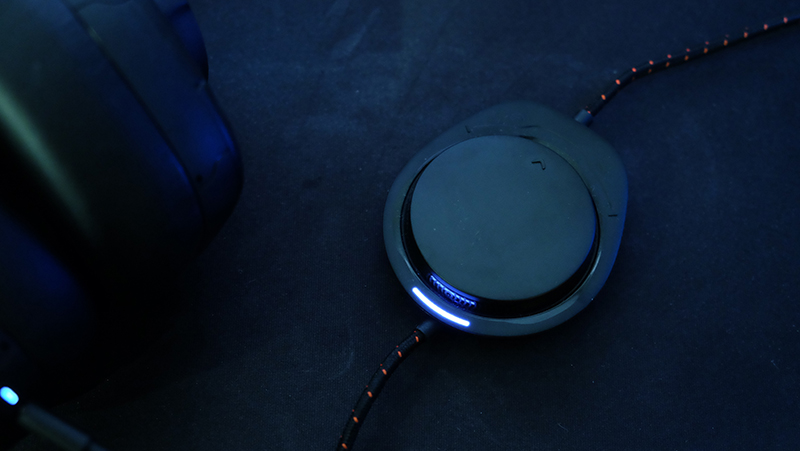 A separate 3.5mm cable plugs into the audio jack adjacent to the USB-C port, so you can use it with consoles like the PlayStation and Xbox as well. Unfortunately, you'll have to give up several features over the 3.5mm audio connection, including ANC, surround sound, and RGB lighting. The Quantum One is first and foremost a headset for PC, and that should be your primary use case if you're considering buying it.

Much of its functionality is tied up in JBL's Quantum Engine software, which offers plenty of customisation options as well. When you first plug in the headset, you can calibrate it using the included calibration mic. The mic is covered by a foam tip that you insert into your ear, and the process is supposed to adjust the surround sound according to your ear structure. Then you'll also need to calibrate the head-tracking, and an onscreen gyroscope helps you ensure your head is in a neutral position before setting the central point of reference.

There is an Advanced Mode as well that lets you input your height and the width of your head, presumably for greater realism. 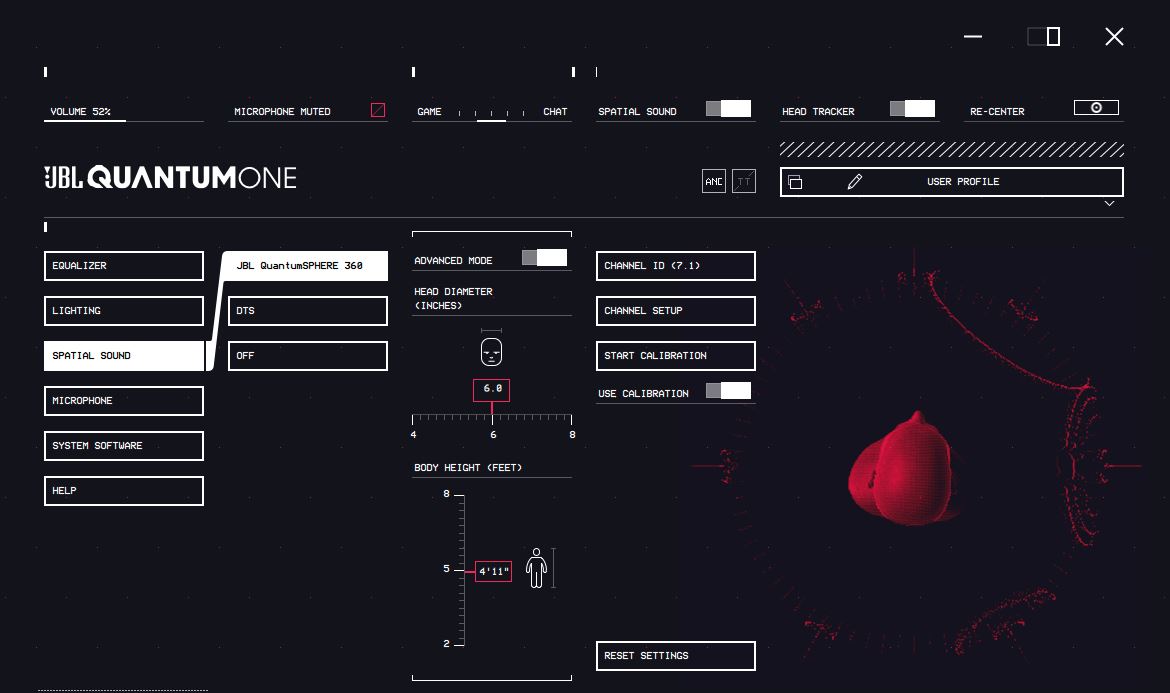 The RGB lighting customisations available are pretty in-depth as well, and you can create your own lighting effects, down to how long each block of colour shows up in the lighting pattern. 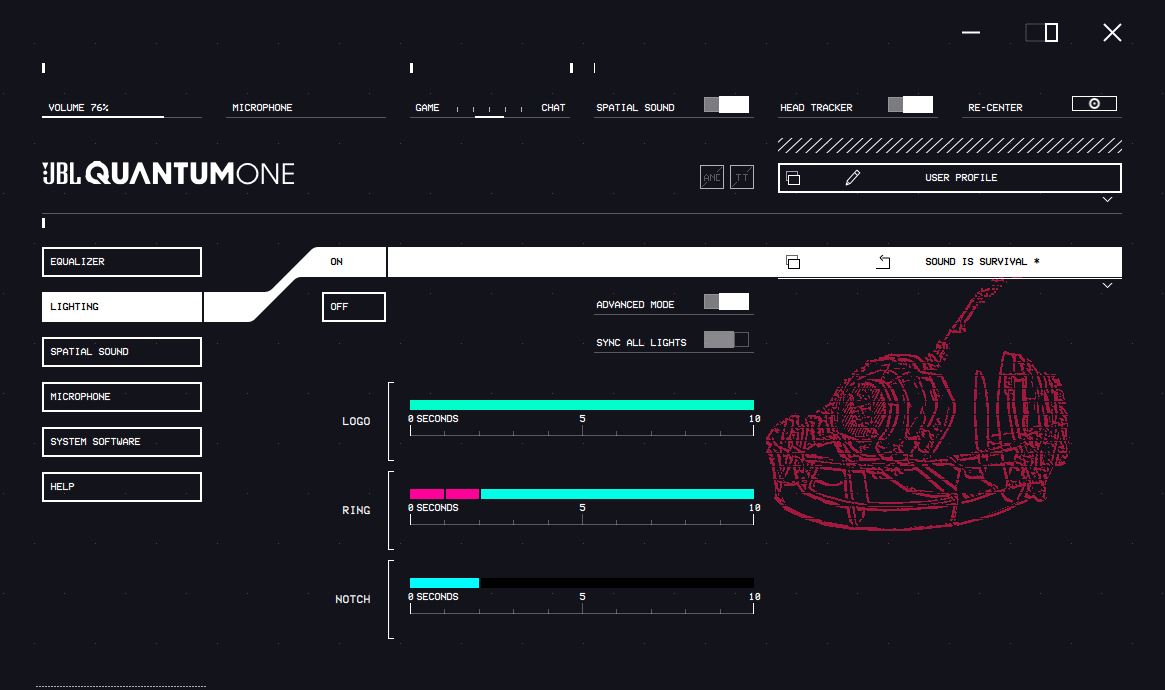 I took the headset for a spin in Valorant, where the Quantum One offered up a lush and detailed sound stage, although it did not feel quite as spacious as what Creative offers with the SXFI Gamer. Nevertheless, positional accuracy was pretty spot on – while the relatively smaller sound stage on my regular in-ear monitors means that I often had trouble separating my own footsteps from that of the enemy in a chaotic situation, I had no such issues with the Quantum One. My footsteps sounded distinctly like they were coming from below, while enemy footsteps were easily distinguishable in 3D space.

Footfalls on different surfaces, from the echo of metal to the soft squish of wet ground, are clearly rendered as well. 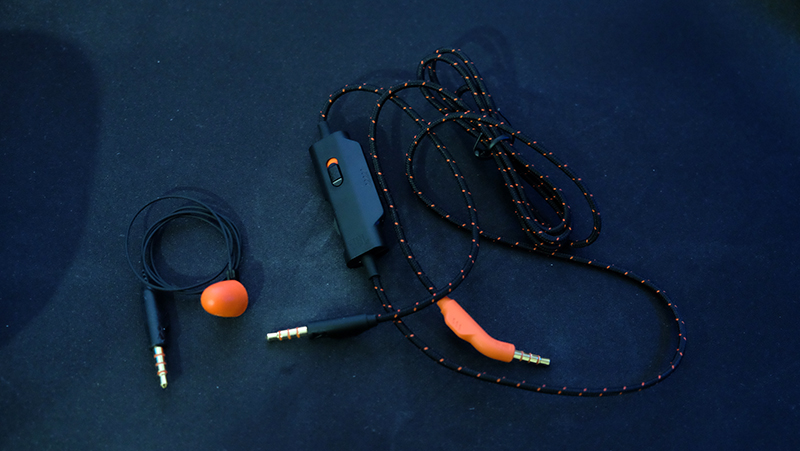 Music sounds excellent on the Quantum One – mids are smooth, rich, and clear, with vocals sounding particularly good. Bass is deep and punchy, without muddying the rest of the frequency. Treble can sound a tad bit harsh however, particularly with instruments such as cymbals. I listened to music in both regular stereo mode and with the spatial sound turned on, and they each offer quite a different experience. I'd say spatial sound creates a more fun, resonant, and enveloping sound, but stereo probably offers additional clarity.

The ANC did a good job of cutting out the whir of my PC and dampening some of the background noise, but it won't entirely silence the TV if it's blaring in the same room as you. A helpful TalkThrough mode quickly lowers the volume of your music, so you can quickly speak to someone without having to fiddle with the volume wheel or taking off the headset. 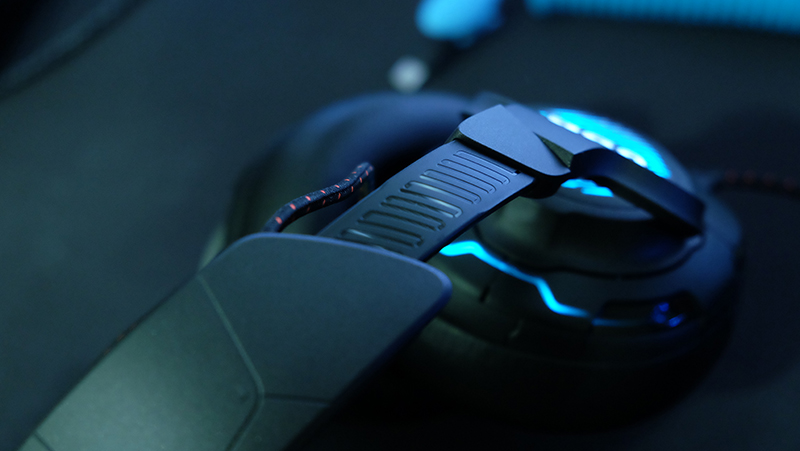 The head-tracking feature was less impressive. It works by fixing the sound stage in place, and sounds change according to the position of your head relative to the audio source in virtual space. If you think of sounds as coming from your screen, turning your left ear to face the screen will then concentrate the audio in the left ear cup. That said, I find that it doesn't add much in terms of immersion to your games. You'll be surprised how stationary your head usually is while gaming, and there is seldom if any turning involved.

What's more, the calibration appears to have a tendency to drift, so audio often doesn't sound completely centred even if your head is, leading to a somewhat distorted perception of the soundscape. JBL has included a helpful recentring button on the headset itself, so this is quickly fixed, but it makes me think that the button was included precisely because the company was aware of the need for this.

The other big letdown is the microphone. Voice quality is mediocre at best, and my voice sounded distant and muffled. Static was also evident in the background, and there was an unpleasant amount of sibilance. I'd recommend using a standalone mic with the Quantum One, but you really shouldn't have to considering how much it costs. 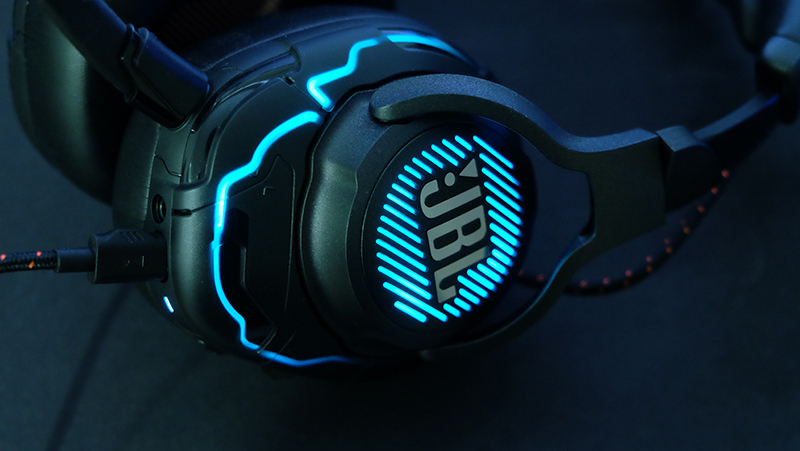 The JBL Quantum One is a solid headset for both games and music. If you can get past its garish RGB lighting, it offers a rich feature set that most PC gamers will appreciate, including ANC, a useful game-chat mixer dial, and some of the best audio I've heard on a gaming headset. The head-tracking tech is a somewhat cool addition, but not particularly useful. At S$369, this is a steep investment, and I think it would be a lot more attractive if the head-tracking feature had been removed to make way for a more palatable price tag or improving the microphone.

Buy the Quantum One if you're a PC player that wants good positional audio and features like the built-in USB audio mixer. Console players should look elsewhere – with the diminished feature set, you won't be getting anywhere close to your money's worth.

The JBL Quantum One is available to purchase on JBL's own online store, their official Lazada store, JBL's Shopee Mall store, and on Stereo's headphone store. Some of these stores are offering the headset at only S$299 (at the time of writing), which makes it much more palatable for what it offers, so check it out!

Write a Review
Compare This | Specifications
Great audio quality and accurate positional audio
Works with both PC and consoles
ANC and integrated USB audio mixer help it stand out from the crowd
Head-tracking tech doesn't confer much benefit and has the tendency to drift from the centre
Subpar microphone
Most features aren't supported on console
Expensive
Our articles may contain affiliate links. If you buy through these links, we may earn a small commission.
Sponsored Links