Get good or take the L 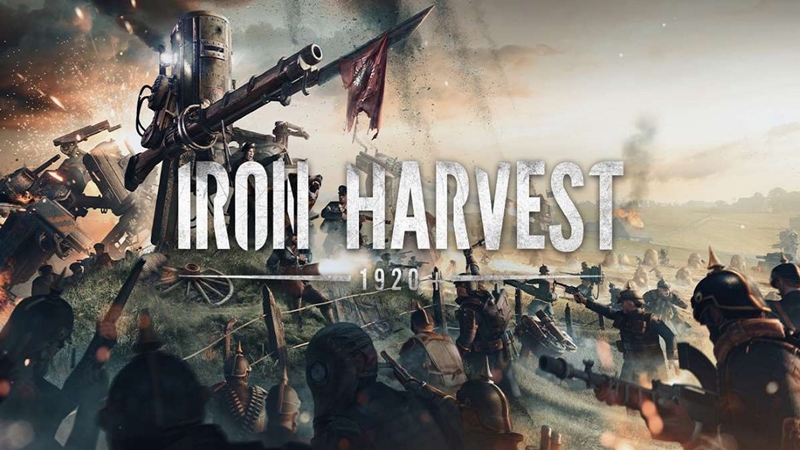 Yes, it has indeed been three years since Iron Harvest's first Alpha test stomped into town, and although a lot of things can change within three years, I'm happy to say that my overall stellar opinion of the game isn't one of them.

With this Kickstarter-funded game having come into its own as a surprisingly solid and in-depth RTS, I think it's high time I gave KING Art Games their three-year-overdue pat on the back. However, we're all busy folk, so let's not dwell too much on the "what" and skip right into the "why".

A spot of history

For those who have just emerged from under their metaphorical waterfalls, Iron Harvest is a real-time strategy game that's loosely based on the Soviet-Polish war of 1919-1920. Chronologically, the in-game conflict takes place just after that period within a fictional version of Europe, and it features regionally-inspired countries like Polania, Saxony and Rusviet. However, it isn't merely a simple rehash of games like Company of Heroes - what sets it apart from the acclaimed RTS great, at least aesthetically is the introduction of mechs into the formula, though of course they aren't as advanced as the ones you might see in Starcraft or Command & Conquer.

Nevertheless, this seemingly-awkward concoction of the 1920s with weaponised dieselpunk-inspired robots actually works in the game's favour, providing a dash of novelty that makes it instantly distinguishable from your everyday historical RTS. In a sense, it's like the developers purposefully poured oil into a bowl of water, if only because they knew that doing so would pique players' attention. 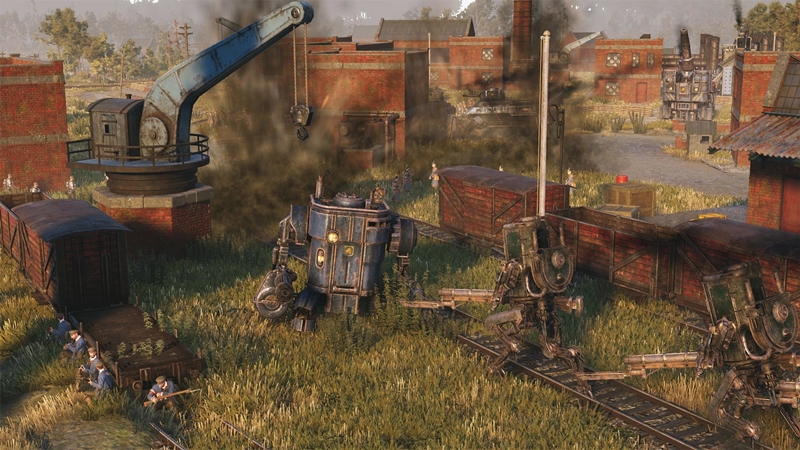 With the formalities out of the way, let's delve into the game for real. As mentioned above, the game takes place in a fictional Europe still reeling from the ravages of war, and this naturally means that there's a narrative for players to follow. The overarching story of Iron Harvest is split into three different campaigns, with players stepping into the shoes of nine different protagonists along the way. Of course,.there is always the option of purchasing the two available DLCs, Rusviet Revolution and Operation Eagle so you can enjoy "the full package", though the latter is arguably more of a "sequel" than an expansion of the central narrative, and it even gives you access to the US-inspired faction of Usonia.

Much like other games in the RTS genre, each of the campaigns are further split into smaller, bite-sized sections, which players can hop into and out of at their leisure. Building on this point of flexibility, there's actually a great deal of it even within the missions themselves, as players aren't given preset routes to take to their various objectives. There's usually more than one approach if you study the terrain carefully, and while your army marches towards the enemy, you should take a minute to admire the environment too, as the aesthetics are almost as impressive as the gameplay quirks.

From the lush greenery of the Polania countryside, to the imposing factory cities of the Rusviet Empire, the environmental flavours sync up impressively well with the flow of the narrative. Additionally, if you'd like to double down on authenticity, you can even have the characters speak in their native tongues like Polish and Russian, which I find is a particularly nice touch from the developers' end. Naturally, the other big selling point for the aesthetic aspect are the various mech models, and for some reason, I don't get tired of them. Why? To put it simply, imagine seeing a bunch of tin cans with legs moving and strutting in formation - it's honestly impossible not to be amused!

It's a lot more intelligent than it looks 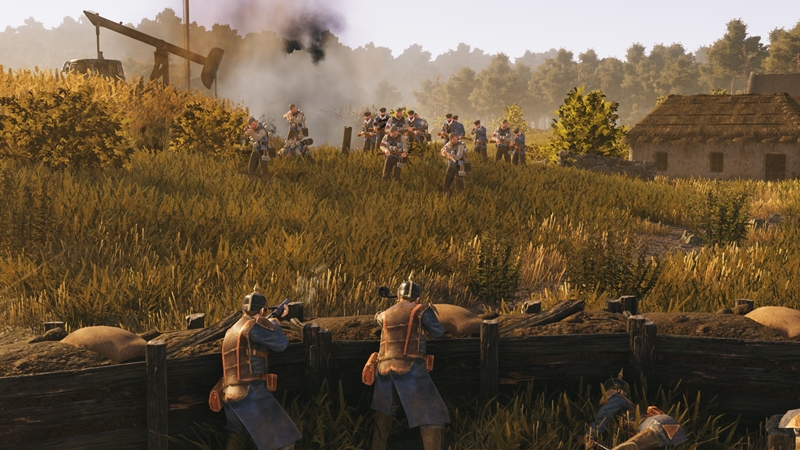 But putting the aesthetic appeals of the game aside, it's here that we should drop you the most important bit of information you'll need to make it through Iron Harvest. Frankly, whether it's the final boss stage or the tutorial, the game won't hold your hand any more than is necessary, if at all. Iron Harvest encourages players to be strategically versatile and really think through their game plan for themselves, a point that is often glazed over in other titles in favour of flashy units or complex tech trees. After all, just like in a Soulslike, there isn't as much satisfaction to be had beating a tough opponent with the computer's help than doing so completely on your own, and I really enjoyed this above-average degree of strategic independence that players are given here.

Speaking of which, this is where we really get the gameplay ball rolling. One of the ways that the game deviates from the usual RTS point-and-click formula is when it comes to unit movement. For example, while available cover isn't explicitly marked on-screen, the game allows you to "arrange" your units behind cover such that they make the best use of it, and there are even markers to let you know where each unit will be positioned. This was one of my favourite features from the demo run back then, and I'm happy to say that it has remained that way.

Granted, it might take a while for newbie players to get used to this "arrangement" aspect, not to mention the game isn't very clear on what you can use as cover and what you can't. However, this can often be alleviated with a bit of practice, and you can always mouse over the environment to see if the arrangement markers pop-up.

Now, there are two sides to this manoeuvrability coin, and positioning is just as crucial for offense as it is for defense. In fact, I daresay the true beauty of Iron Harvest's positioning system really shines through when you're on the offensive. For instance, attacking the enemy's mechs from specific directions (usually the rear) allows your units to deal more damage to them, and the reverse applies when you're attacking them head-on. It's another facet of warfare that other games often don't take into account, and the added "complexity" of the gameplay in this aspect brings us back to the need for players to be strategically versatile and quick on their tactical feet. 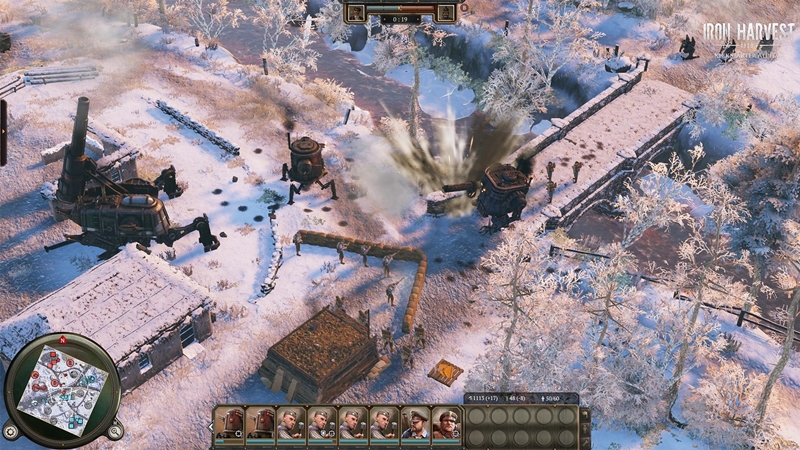 Sadly, although Iron Harvest does come pretty close to the full ten points, the game still doesn't hit that mark for two main reasons. First and foremost, some matches can last immensely (and sometimes uncomfortably) long, and the reason for this is actually a fairly simple one - many of the mechs, which are arguably the game's pride and joy, move so darn slowly.

Although I won't deny that constructing and using them are generally enjoyable, I do concede that that higher-tier mechs are sometimes impractical. In exchange for near-overwhelming power, these can be so sluggish and bulky that by the time they manage to make their way to the frontlines, all of the metaphorical cows would already be at home watching TV. When it does happen. it's almost as if you're playing one of those "idle clicker" games - you press one or two buttons and wait. And wait. And wait some more.

To sum it up, the action can sometimes take too long to unfold, and even when you think you've got a stable footing, all your opponent needs to do is march into your base with a couple of high-tier mechs and raze it to the ground, which leads into the second big flaw of the game - a rather facepalm-worthy late-game. 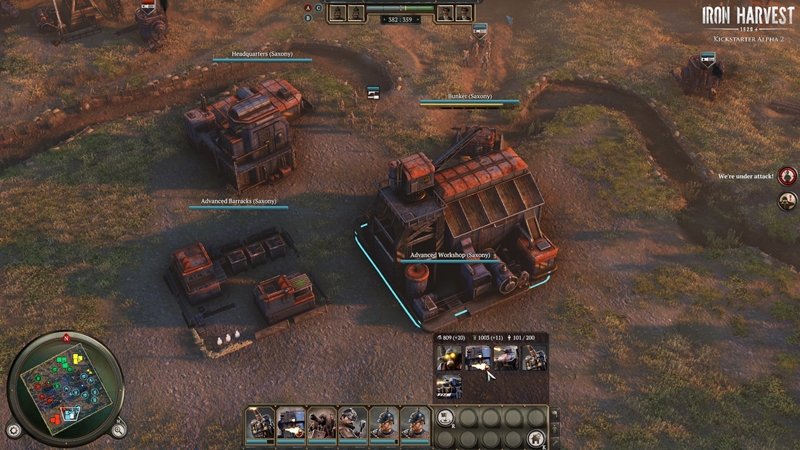 Although the game prides itself on offering players strategic independence, it's also worth noting that the novelty tends to fall further apart at the seams the longer the matches drag, and that's mostly due to how strong some of the mech units are. Although all of the different factions feel quite balanced when viewed as a whole, a couple of the more advanced mechs are quite simply overpowered even with the cover and positioning features in place. Needless to say, this means that many late-game engagements usually end up reverting to the rock-paper-scissors format commonly seen in other RTS games, forcing players to default to conventional long-term strategies like "turtling".

As such, given that the more "creative" strategies only tend to be viable in the early to mid-game, you might be inclined to get the game moving faster such that they retain their efficacy. But surprise, surprise - you often can't do that because of the mechs' slow movement speed. So, to cut a long story short, there are cases when the entire situation just becomes a gigantic Catch-22 in and of itself. Of course, you could technically rely more on infantry squads, which are faster and much more nimble by comparison, but then what's the point of playing a mech-centric RTS game in the first place? In hindsight, it's actually pretty amusing.

When the dust finally settles 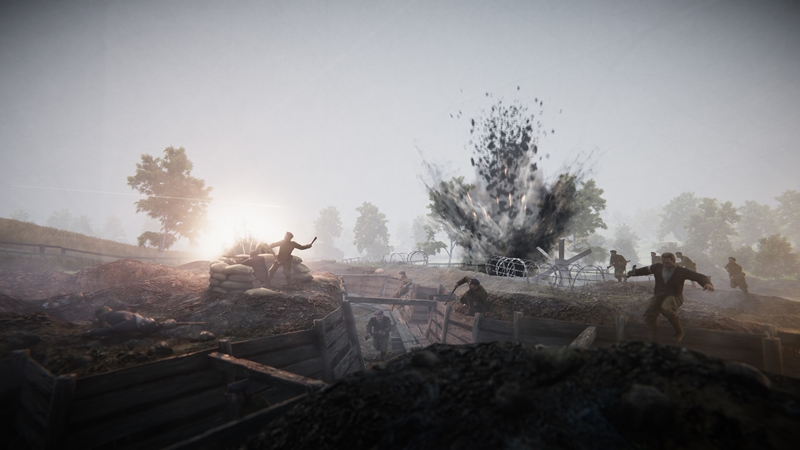 Still, despite this otherwise paradoxical flaw in the gameplay structure, I think KING Art Games has managed to nail down most of the important stuff. When the game "works", it does so exceedingly and excitingly well, which means that a few quick tweaks and unit adjustments from the developers might just be what the doctor ordered. At this point, it's already pretty close to true-blue RTS stardom in many respects, and honestly, if you're just interested in stomping enemies into the ground with dieselpunk war machines and the odd spark of tactical ingenuity, then I think you'll be pretty happy rolling with Iron Harvest.

Write a Review
Compare This | Specifications
Explores aspects of warfare that are often ignored in other RTS games
Players have lots of wiggle room to try different strategies
Above-average aesthetics for both units and environments
Native voiceover option adds extra authenticity to an already-rich narrative
It's got mechs. Everyone loves mechs, right?
Positioning and cover can take some getting used to
Longer games tend to favour more conventional approaches
Higher-tier units can be rather OP en masse
Some mechs can be slow. Annoyingly, frustratingly slow.
Our articles may contain affiliate links. If you buy through these links, we may earn a small commission.
Sponsored Links