Let’s face it, NAS boxes these days are a dime a dozen. Just about every reasonably fast NAS is powered by Atom processors and costs a pretty penny. What really separates one brand from another are either in how the chassis looks and feels, or the software powering the user experience. Iomega, however, looks to change all that with their StorCenter lineup, preferring instead to showcase the idea of a personal cloud, instead of throwing down a laundry list of features that, quite frankly, most respectable NAS brands mostly come with anyway.

The px4-300d as tested here, comes equipped with four drive bays, and is powered by a dual-core Intel Atom processor running at 1.8GHz, as well as 2GB of RAM. Four USB2.0 ports on the outside let you hook up additional storage or even USB printers, while a USB 3.0 port lets you take advantage of newer and faster storage add-ons. Just like most other NAS boxes on the market, you get everything from uPNP media server, FTP capabilities and Bittorent downloads. The more business-minded would be glad to note that the px4-300d is also VMWare VSphere-certified, while various RAID capabilities let you add a touch of redundancy to your stored data.

Iomega’s Personal Cloud concept is basically a simplified way to let users have a ‘cloud’ of their own. Basically, you can access and share data stored on your StorCenter NAS at home or in the office from various locations, as well as set up collaboration and even backup. While the Iomega Personal Cloud services are only accessible via PC, Mac or Linux machines, apps for both iPhone and iPad are available to let you remotely access your NAS with ease. The existing desktop apps aren’t designed for geeks, but instead the novice and first-time NAS users. A great many things are simplified i.e. uploading and sharing photos, while users can even invite others to “join” their personal cloud, with each NAS supporting up to a maximum of 250 connected devices, though Iomega recommends limiting access to 12 concurrent users at any one time due to performance limitations.

Benchmarking with the Intel NAS Performance toolkit produced HD Video playback and record scores of 82.6MB/s and 72.8MB/s respectively, while the content creation and office productivity tests resulted in 8.8MB/s and 25.4MB/s each. File transfer tests to and from the NAS averaged 74.8MB/s and 75.1MB/s respectively, while directory copying to and fro averaged 4.4MB/s and 13.5MB/s each.

Iomega offers the px4-300d both with and without hard drives. Drive-less, the asking price is S$999, going all the way up to a whopping S$3,789 with four 3TB hard drives, for a maximum capacity of 12GB. Off-the-shelf consumer 3TB drives are priced around S$250 a pop on the street, so a drive-less px4-300d makes more sense, as you’d end up shelling out S$2,000 or so tops, almost half that of Iomega’s 12TB package. Enterprise-class 3TB drives are just under S$500 each as well, so if you go that route, you’re still spending less. As for the drives used in the px4-300d, Iomega says they use consumer-grade disks.

Bottom line, Iomega’s got a very enticing package in the px4-300d. The idea of a personal cloud done their way is certainly something a novice could pick up without too much fuss, while the hardware features and performance do appeal to the more advanced users among us. Just be prepared to go a little more legwork, and get the disk-less version, your wallet will certainly thank you. 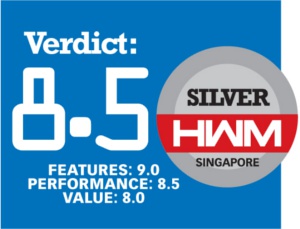