The Core i7-980X is based on the Nehalem microarchitecture. Following Intel's Tick-Tock product cadence cycle, which mandates a process technology refresh after a new CPU microarchitecture, the 980X represents the 'tick' and is the 32nm die shrink of the Nehalem, known as Westmere. This process technology switch has already debuted with the mainstream, dual-core 32nm Clarkdale processors, which introduced numerous desktop and mobile processors. 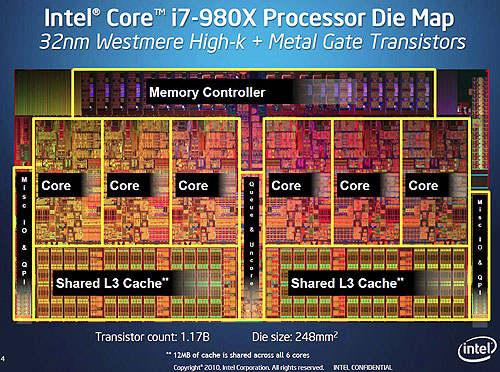 As the table below illustrates, take a Bloomfield Core i7, shrink it down to 32nm and increment the core count by two, including a corresponding increase in the amount of shared L3 cache and you'll get something like the Core i7-980X. In fact, they both have the same default clock speeds and unlocked multipliers that should appeal to the extreme crowd.

Naturally, the newcomer gets a new codename, Gulftown, to add to the many different names in use for Intel's processors. 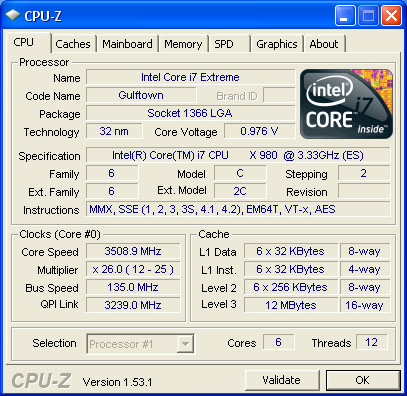 While there are many similarities between the two performance heavyweights, the Core i7-980X gets the benefit of being the newer processor. Intel has since added several new instructions to improve AES encryption performance, notably on the Clarkdale processors, and the 980X will have these AES-NI instructions.

Other key features of the Nehalem architecture, like HyperThreading (12 threads!) and Turbo Boost are found on the Core i7-980X. However, unlike the sometimes impressive speed bumps we have seen on Intel's dual-core Clarkdale processors, the Turbo Boost on the Core i7-980X is more reserved due to its already-high TDP. On single-threaded applications, one is likely to find an increase of two speed bins (266MHz) while on multi-threaded applications, it will just be a slight 133MHz increase.

Along with the Core i7-980X processor, Intel has included one of the largest 'stock' coolers we have seen in the retail package. The new Intel DBX-B thermal solution even comes with a switch to toggle between two fan speeds. From our experience, even in its 'Performance' mode, it was not overly loud or intrusive and Intel rates it at less than 35 decibels at its max 1800RPM. 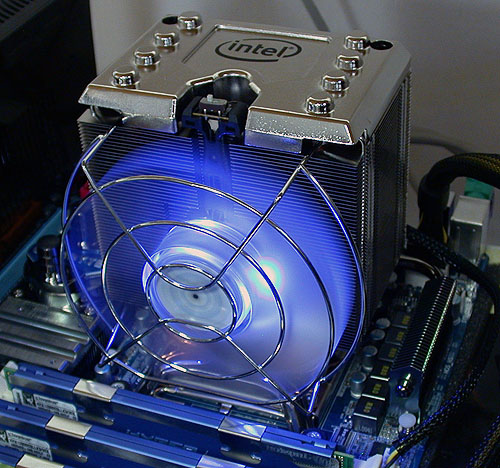 So what does one do with a six-core processor? Well, in our case, we put it to the test and benchmark it to death (okay we exaggerated there, but you get the idea). Intel meanwhile trots out a list of existing and upcoming applications that will require the extra processing power. The examples include rendering or video encoding applications like MAXON CINEMA 4D and Sony Vegas Pro 9.0, with some current and future games thrown into the mix, like Napoleon: Total War and Trinigy's Vision game engine. In our case, we put it to test using our tried and tested set of application to figure out how it fares. We might take our testing further with more optimized applications in a separate article in the near future, but we believe our findings for now should generally be an adequate gauge.

Write a Review
Compare This | Specifications
Consumes less or equal power compared to Intel's competing quad-cores
Excellent overclocking potential
Costly
Our articles may contain affiliate links. If you buy through these links, we may earn a small commission.
Sponsored Links