Come On Down to Cherryville

Looking at the results of our rigorous testing, it is clear that the new Intel SSD 520 series delivers on the performance front.

Performance on PCMark Vantage was exceptional and the new Intel drive was always amongst the fastest on the other tests as well, clearly matching the speed of the current crop of high-end SSDs. The new SSD 520 series also easily outclassed the older SSD 510 series in a number of benchmarks. However, IOPS performance on Iometer was a little lackluster, but it did post solid response times on the same benchmark.

Overall, performance is exemplary and clearly one of the best in its class. And moving on to Intel’s claim of better reliability than competing SSDs, based on our time stress-testing the drive and without using the drive extensively on a day to day basis, what we can say is that it ran smoothly and without any hiccups.

Intel SSDs have always commanded a premium and the new SSD 520 series is no different. Locally, expect prices for the 240GB drive to be at about S$570, but it can go for under S$530 if you know where to shop . This is more costly than competing brands such as Corsair, Crucial and OCZ, but not by much to be completely honest - around S$20 - S$30 range. Considering its performance and Intel’s extensive validation period to ensure total reliability, we think this premium is well justified. Those on a tighter budget but won't settle for anything less than the Intel 520 series for your next SSD, you could opt for other capacity price points. 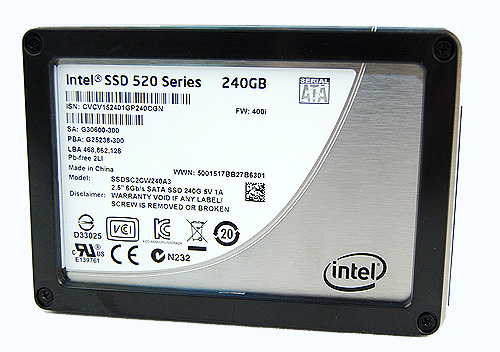 But how does it rate against Kingston’s HyperX that won our last shootout? To begin, for the same 240GB capacity, you’ll need to fork out a S$100 more. And while the Kingston drive is fast, we found that the Intel’s latest is more than capable of taking it on. What the Kingston has going for it though is its nice design and excellent after sales service and support. But is that worth a S$100 more? Probably not for some folks, but we'll leave it up to you to decide.

All things considered, Intel’s latest SSD 520 series is yet another winner from the company. The switch to a SandForce controller yielded significant gains in performance over the older SSD 510 series and its Marvell controller. This, coupled with Intel’s reputation for building reliable drives, and the fact that they managed to deliver the new drive at price point, which, although slightly higher than its competitors, is still palatable enough for most enthusiasts to stomach, makes the new Intel SSD 520 series high in our recommendation list.

Write a Review
Compare This | Specifications
Class-leading performance
Much improved over Intel SSD 510 series
Special firmware exclusive to Intel
Slightly pricey
Below average IOPS performance on Iometer
Our articles may contain affiliate links. If you buy through these links, we may earn a small commission.
Sponsored Links